Are you familiar with GeoGuessr? It’s a game that drops you in the Google street map view of a random place, and you have to guess where you are using any clues at your disposal — types of cars, vegetation, architecture, signage. Once it put me in Australia and I thought I was in Florida. But once it put me in New Mexico and my guess was very accurate thanks to my having been there in L2.

There have been times during this trip when my surroundings have felt very comfortable, when it’s as if I’m on a drive through a familiarly rural part of Pennsylvania. If GeoGuessr plopped me onto a two-lane road in central Texas I might think I was in Bucks County, at least for a few seconds. But there are definite differences in the roads and surroundings. The distance between double yellow lines is wider, for instance, and I always want to push them a few pixels together because I have trained myself to think in terms of screens. (You can see the yellow lines on the guys’ recent entries.) There are also way more buffalo.

Relatedly, I have felt very safe throughout this leg. On each of these trips I think about what I would do if the car broke down on a deserted road and I didn’t have a cell signal. The answer would pretty much always have to be wait for someone to drive past and try to flag them down, though I’d also pop the hood and check levels of fluids because that’s the only thing I know how to do. And then maybe I’d bang my head on the steering wheel because it worked for Michael J. Fox in Back to the Future. But whereas at times on L2 and L3 I felt vaguely unsettled at the hypothetical idea of having to rely on the help of a stranger, this time I never felt like the potential stranger could be a psycho just waiting to run across a helpless lady on the side of the road. 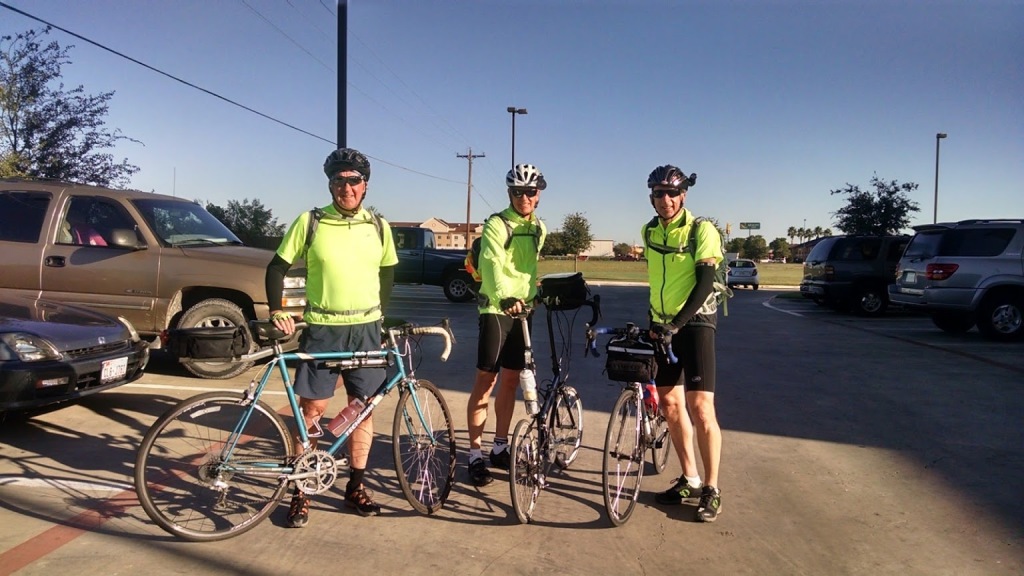 Realizing my lunch options in Round Top might be limited, I decided to pick something up in Bastrop, which had a bunch of fast food chains near its cluster of hotels. Is there a name for the part of a small town where all the hotels are? Hotel Plaza? Hotel Park? I wasn’t going to go back to Schlotzsky’s and satisfy charm robot. After driving in a six-mile loop I opted for Taco Bell because I’d eaten a lot at the Hampton Inn breakfast (a muffin, an omelet, a banana, and something else I think) and wanted to eat light. I have trouble not eating all of the food in front of me so the best thing is always to put less food on my lap.

I went through the drive-thru and ordered a chicken taco. The guy taking my order asked what kind of sauce I wanted. “I never go here so I don’t know what my options are,” I said, annoyed at being the person who tries to explain things about myself to waiters. There was mild, hot, and fire; I chose hot. The taco was a 5/10. 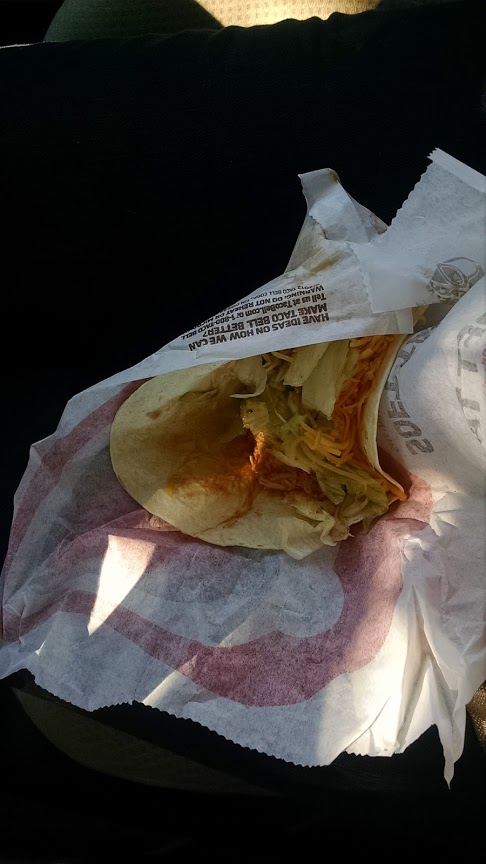 Here are a bunch of photos I took while driving: 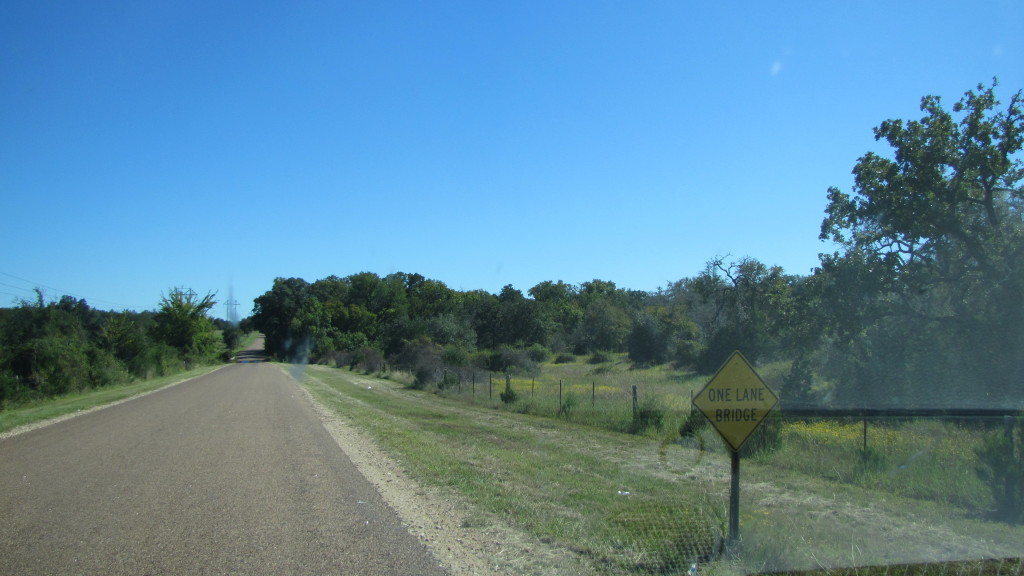 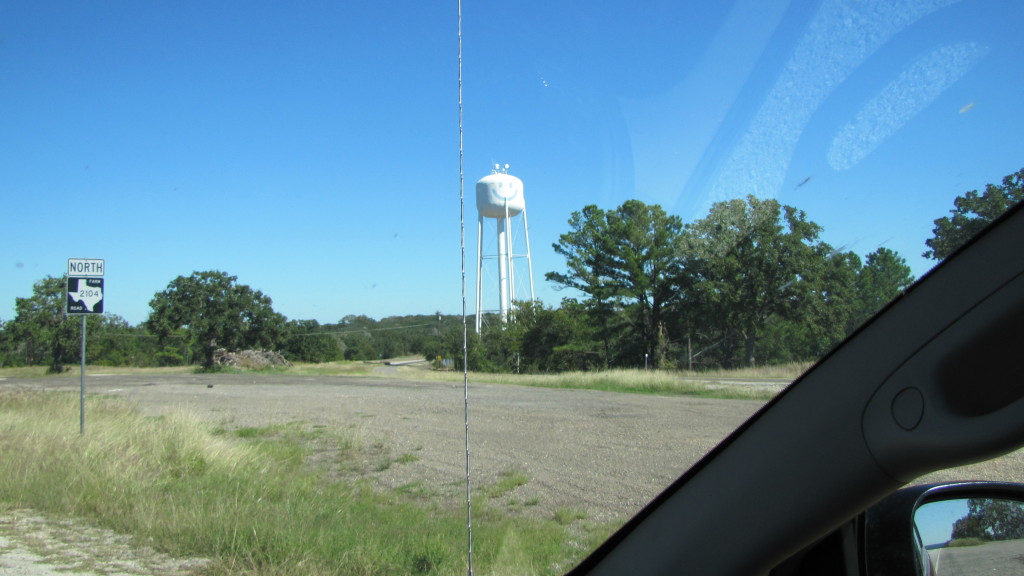 Hard to see, but this water tower has a happy face on it. I passed a couple of these and they lifted my mood, because they are cute and seem beneficent 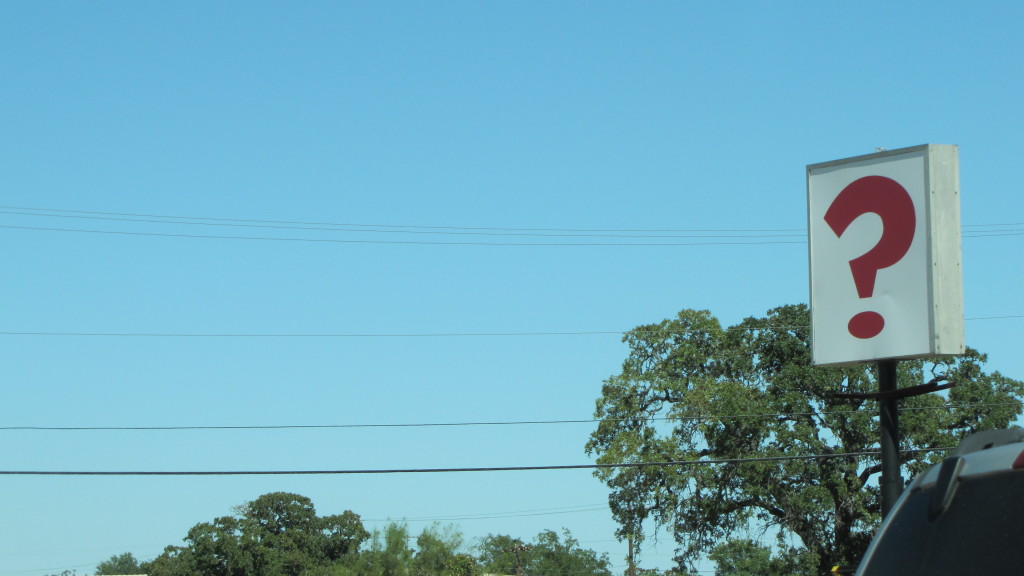 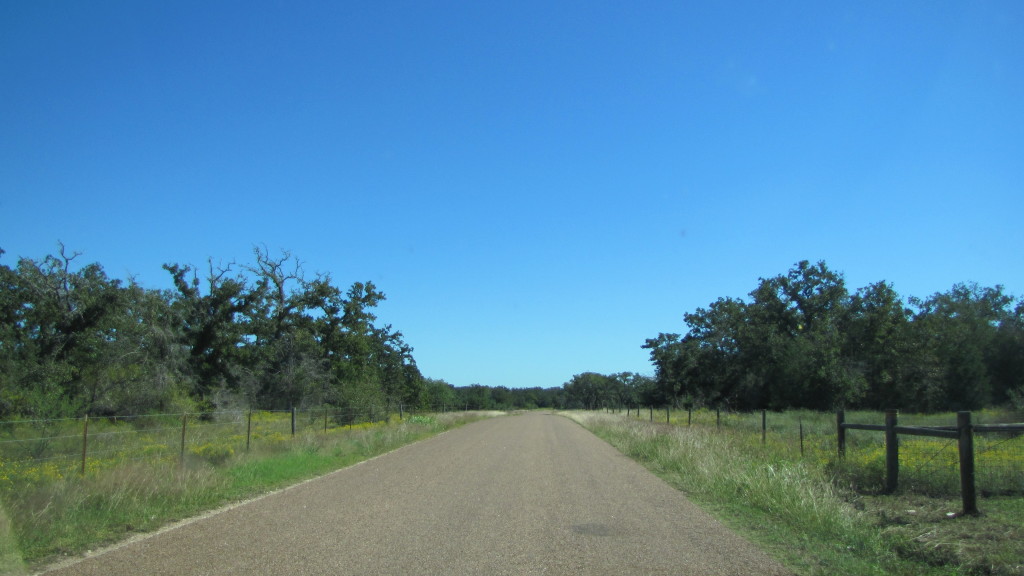 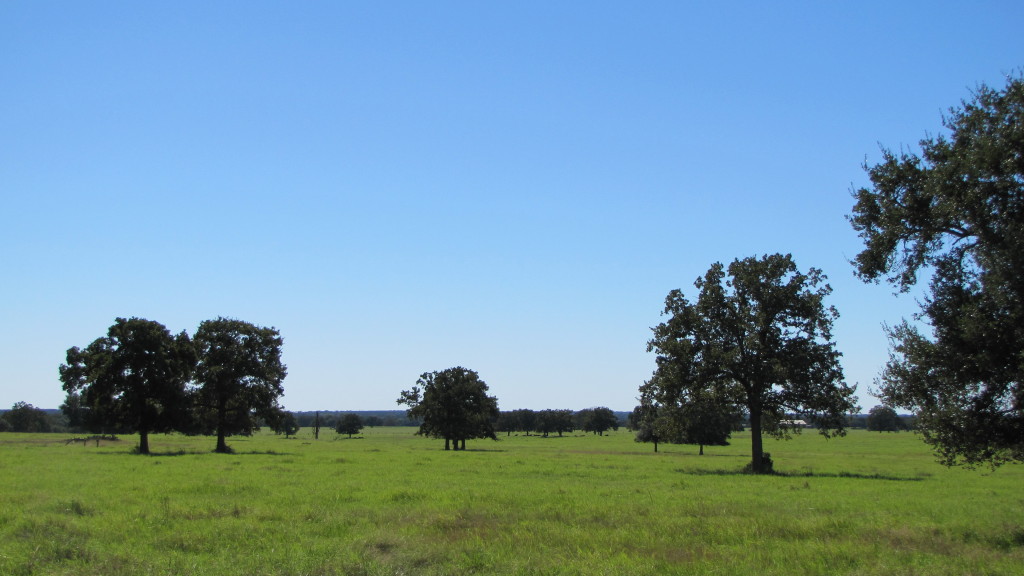 The trees in this field were in small groups, as if at a cocktail party

I arrived at our B&B exactly at 3, having learned from past mistakes. The Round Top Inn is a former cigar factory and is quite lovely inside and out. Round Top (pop. 90 as of 2010) is an interesting little town — it looks like a haven for artists, though much of it was closed when we were there. We’d missed their big yearly event, a week-long antique fair, by just a few days, and the owner of the inn told me she was still recovering from it.

The following may or may not be a reenactment:

My Philadelphia accent definitely got stronger after a week of hanging out with the guys. 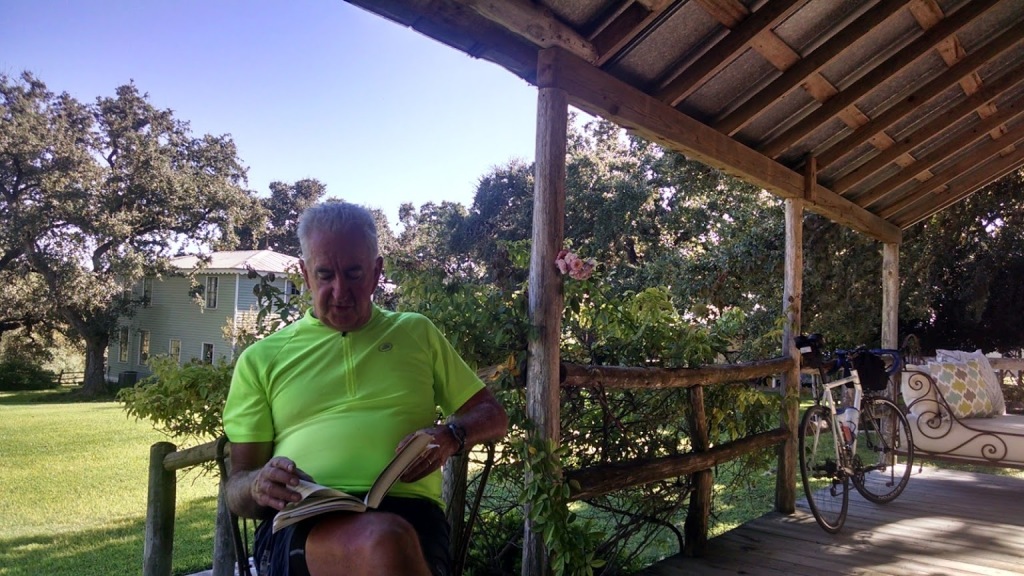 Building at the Round Top Inn 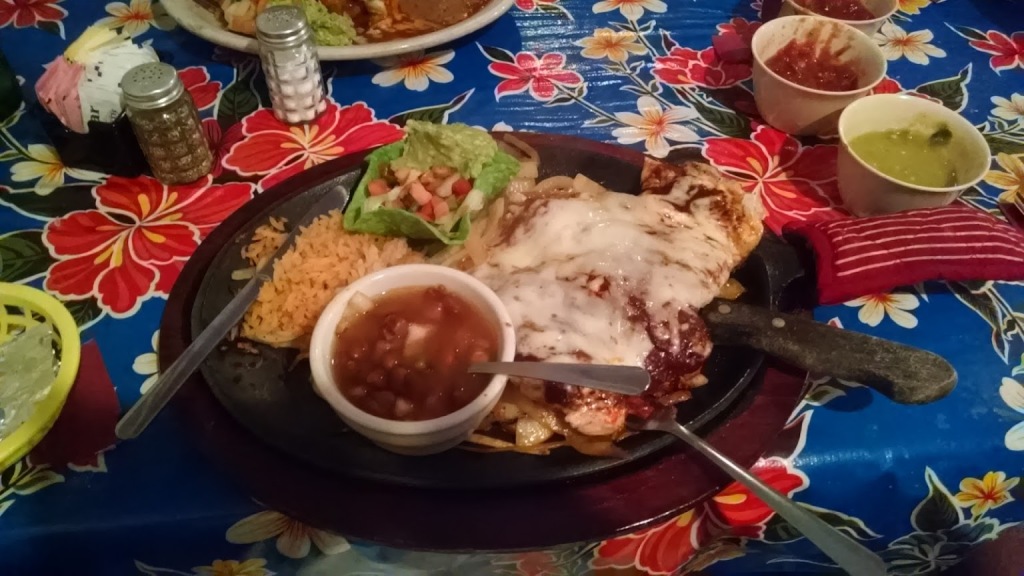 Utensil fiesta, and our first and last Mexican meal of L4 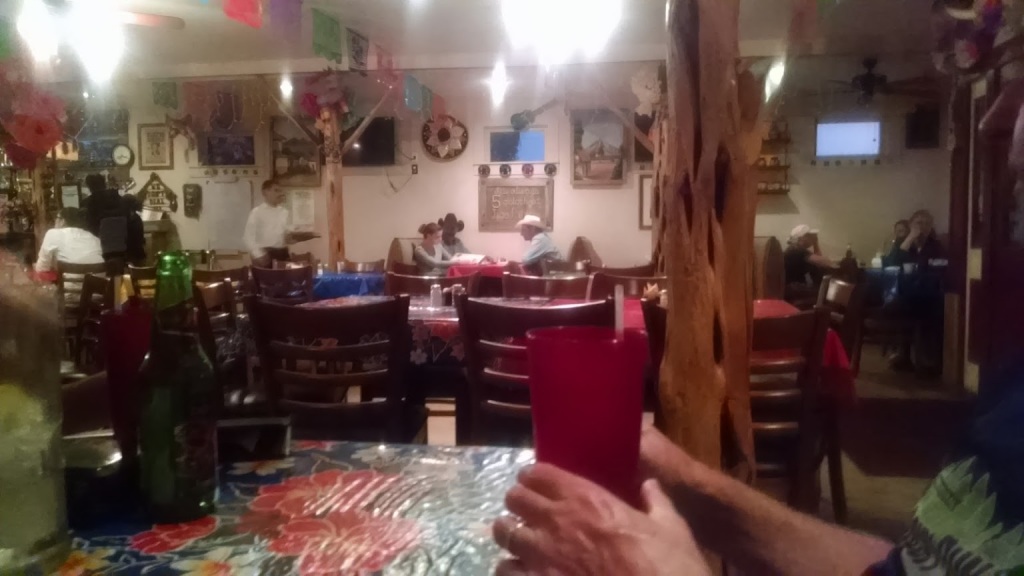 The cowboys had mustaches, too 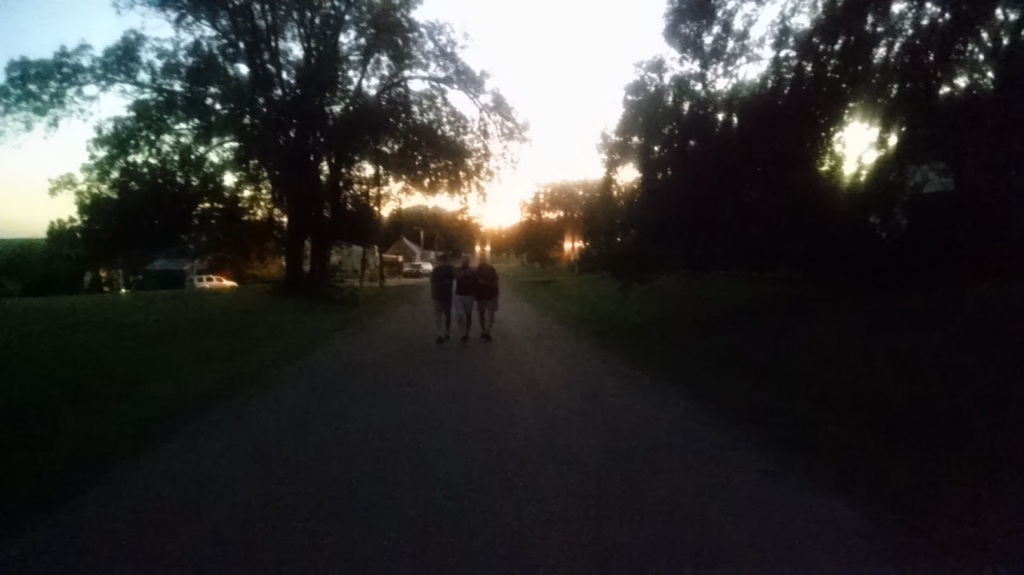 The brothers walking back to the inn after dinner 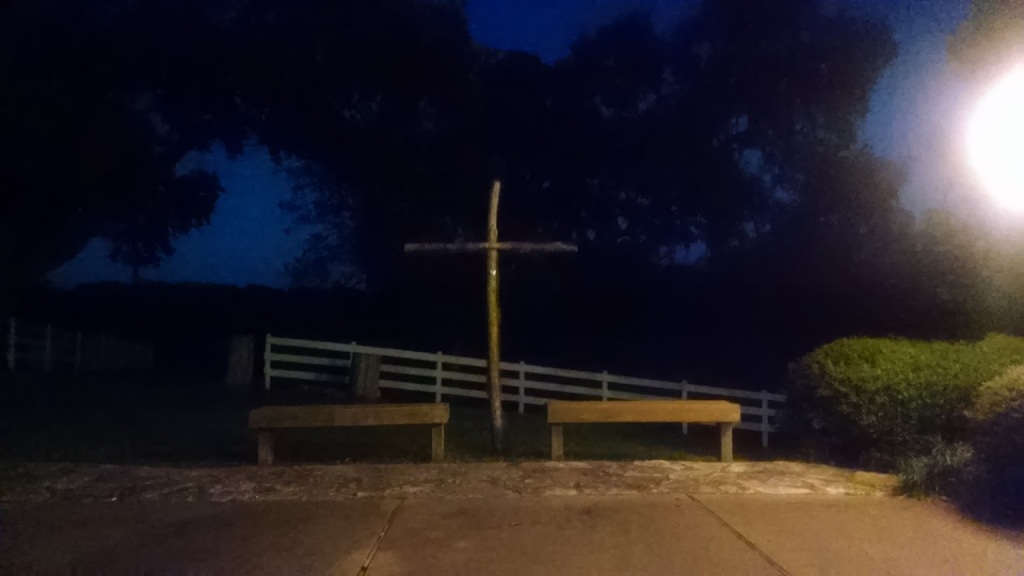 From the Bethlehem Lutheran Church, Round Top 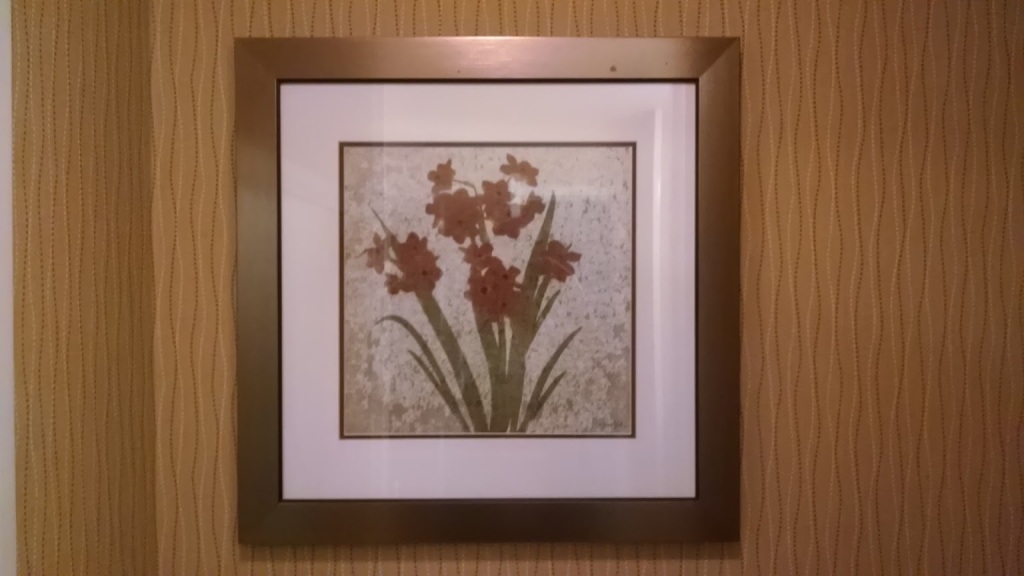 6/10. It’s completely inoffensive and just fine for hotel art. Its objective is to make you feel cheery, to remind you of actual flowers and the nice feelings nature can give you. It’s inspiring very neutral feelings in me but certainly not bad ones.