When you stay at hotels, do you use the little shampoos and soaps they give you? My new policy is to use hotel soaps only if they seem especially good. The hands-down best hotel beauty products I’ve encountered were at Le Château Frontenac in Quebec City. They use Rose 31, a scent by Le Labo, and I became so enamored that I’ve started ordering Rose 31 laundry detergent so that my clothes can smell like it. An indulgence, yes, but I’ve come to believe in the positive influence of good scents on my sense of the worldence.

Anyway, some Best Western on L2 gave us such a huge bar of soap that I couldn’t bring myself to leave it behind. So I’ve been toting it around in a baggie and watching it shrink slowly with use, inordinately proud that I am not wasting plastic and soap. I’m sure most frequent travelers bring their own soap because it’s simple and logical, but to me it is a brilliant new idea I came up with, so I wanted to brag about it. Think about all the soap that’s thrown away in a given day in the world’s hotels. Now think about how you can change it.

I woke up just before 6 and worked for a spell, joining the guys in the breakfast room at 7:30. Sharon made an excellent meal of scrambled eggs, bacon, a fruit salad, a maple cake, and probably other stuff I’m forgetting. I should have taken a picture of the spread; it was one of the best breakfasts we’ve had on all of the trips combined. (And breakfasts this time around have been particularly lousy.) 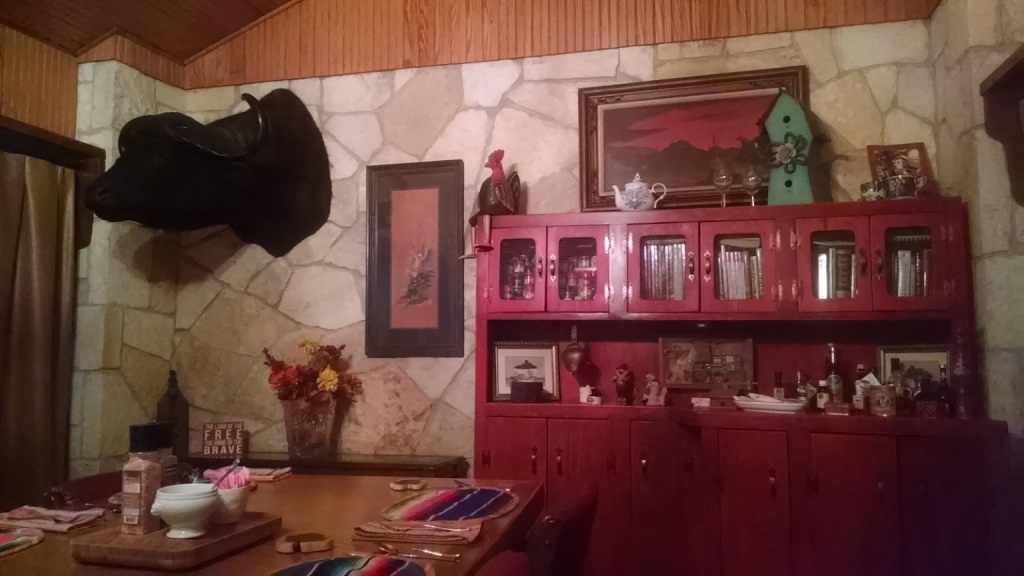 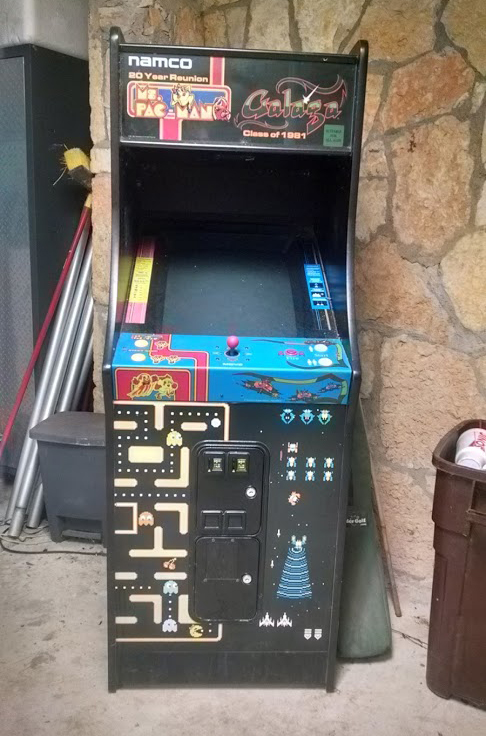 Ms. Pac-Man/Galaga machine in the Diamond H garage. If it had been plugged in I would have kicked everyone’s ass at Galaga, especially because they’ve probably never played it before. 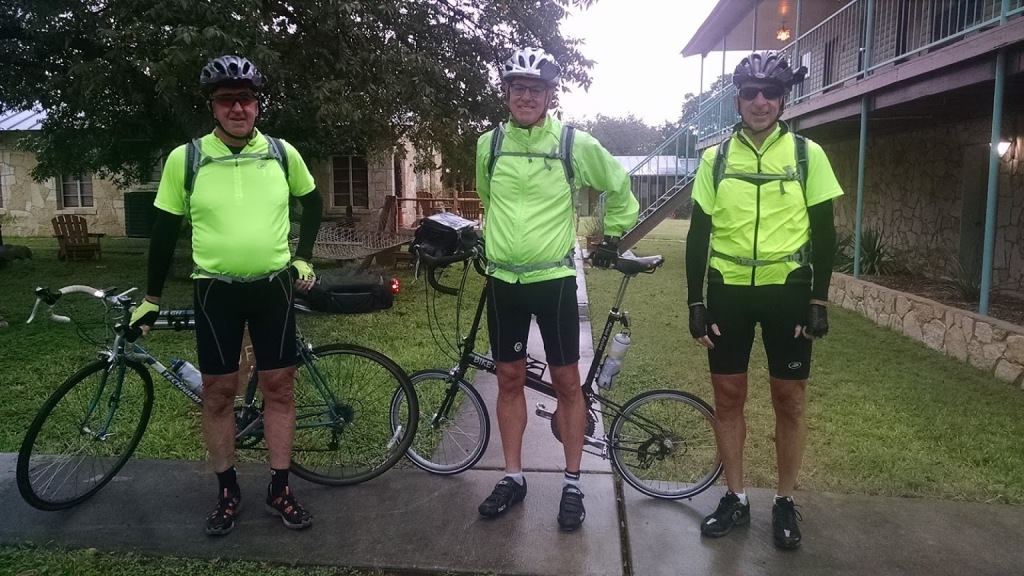 I did not envy them this morning (not that I ever do, really)

Symbols and portents will start appearing everywhere if you’re looking for them. The guys started off a little after 8, riding into a misty, chilly morning. Right after they left, as I was walking up the staircase back to my room (see above photo for stairs), I heard a loud sound and turned around to see a cat falling violently out of a tree (see above photo for tree). Its body was all twisted up as it fell, but it landed on its feet and trotted around the building. Jim was outside at the time and I yelled over to him, “Your cat just fell out of that tree, but I think he’s okay.” I’m not sure if he heard me right because he didn’t say anything, just looked at me, and I continued back up the stairs.

I wondered if it meant anything, because it seemed like it should. The obvious: One of the riders will fall but will be okay, or the less obvious, more celestial: Earthly disturbances may occur yet the universe will remain whole. But something told me this didn’t mean anything; it was just a cat falling out of a tree. That a witnessed act of nature might be only itself seems symbolic, too, though, doesn’t it? I can’t escape! 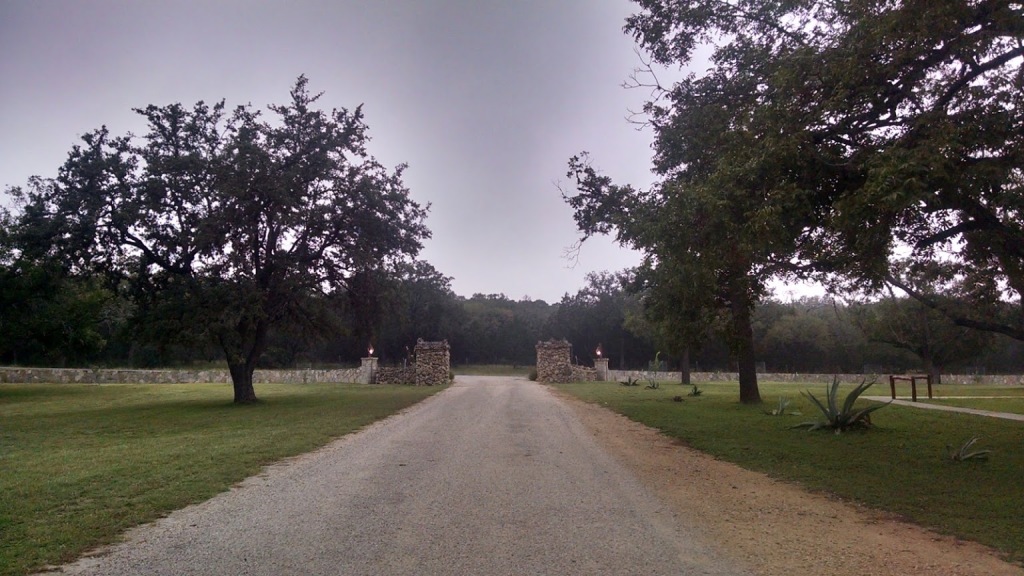 Looking out at the road from the Diamond H. #NOFILTERYOUGUYS

At 11 I packed up and got ready to head out, thanking Jim for his hospitality and telling him I’d send more New Yorkers his way. “Okay,” he said, sounding not at all enthusiastic about the prospect.

He had told me earlier that morning to stop at Camp Verde on my drive out. “There’s a nice little store there that you have to visit,” he said. “It’s got a lot of Texas souvenirs and it’s real nice. Quality Control” — meaning his wife Sharon — “loves it.”

The camp was the headquarters for U.S. Camel Corps, which experimented with using dromedaries as pack animals in the southwestern United States. The Army imported camels in 1856 and 1857, using them with some success in extended surveys in the Southwest. The camels did not get along with the Army’s horses and mules, which would bolt out of fear when they smelled a camel. The soldiers found the camels difficult to handle and they detested the smell of the animals.

Camp Verde bore no sign of its previous association with the U.S. Camel Corps other than an attractive sculpture, but the restaurant and store were quite nice in a Pottery Barn kind of way and suggested affluence in the areas nearby. 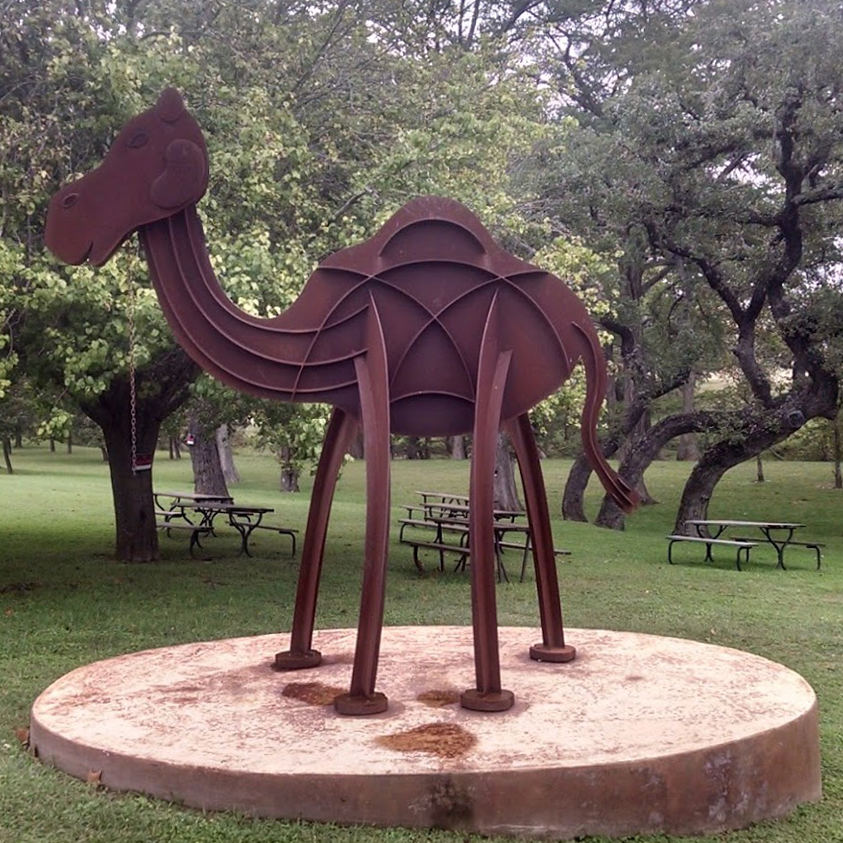 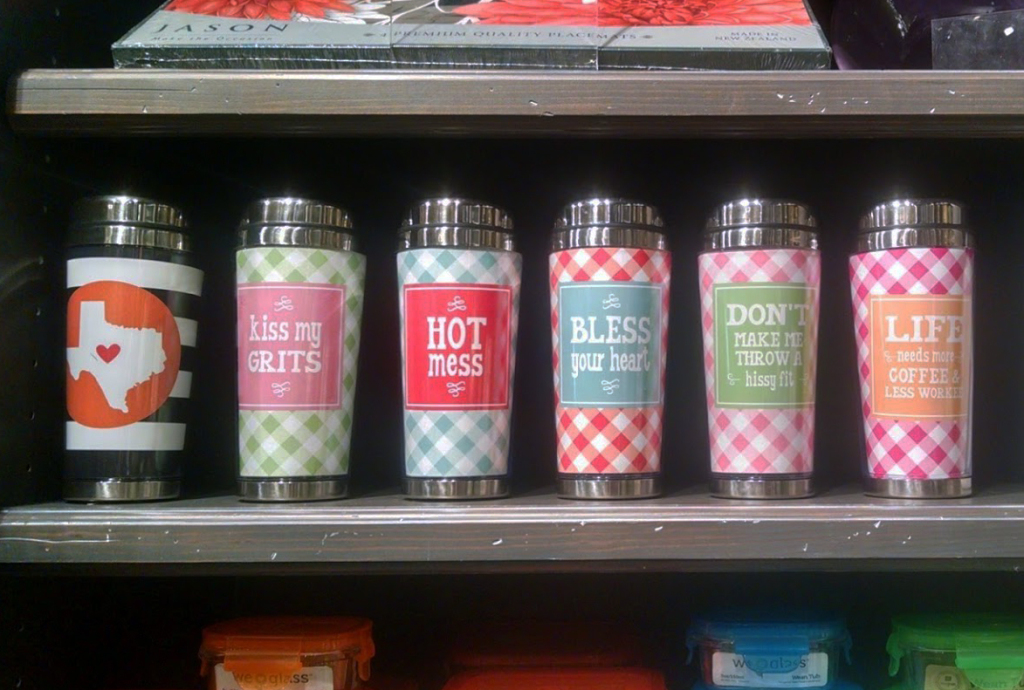 Mugs with Texas ‘tude. I took the time to make the labels face forward so I feel obligated to myself to include this. The last one reads “LIFE needs more COFFEE & LESS WORKEE”

There was a cool totem pole on the grounds, tucked away near the entrance to the rest room. I am not much of a taker of selfies but thought it could be fun to have a picture of my face next to a dramatic totem pole face. I looked both ways and saw no one coming, so I got my phone out and fixed my hair and started framing the shot so as to flatter both myself and the pole. But it always takes me a while to find a becoming angle, being unpracticed at selfies and being afflicted with the Sullivan nose-to-jaw ratio, and soon enough a maintenance worker appeared on the path, heading my way. I instantly felt like a vain fool and shut down the operation. As I headed back to my car a guy on a bench was smiling at me. He’d seen the whole damn thing. 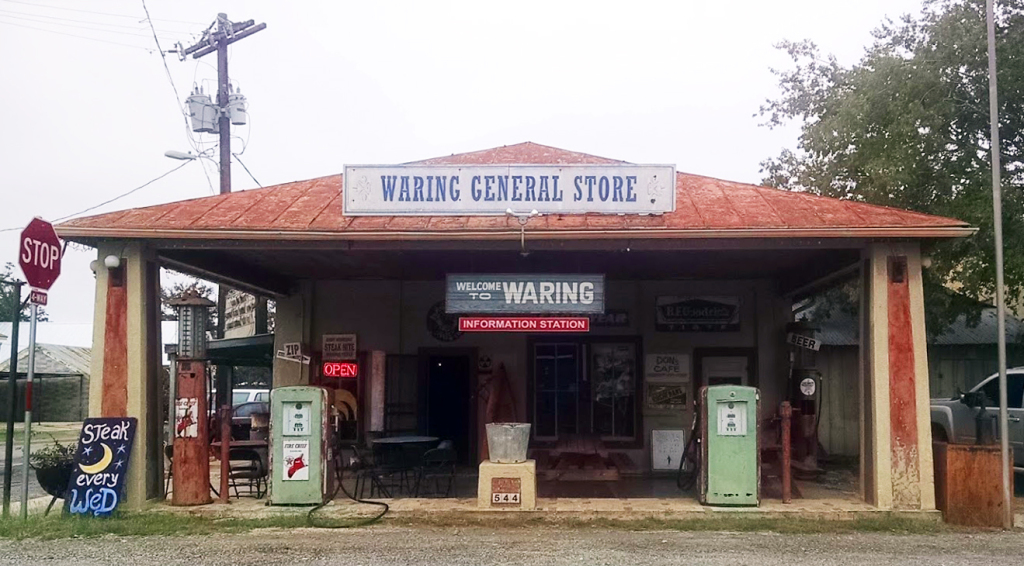 The Waring General Store was made for road trip photos, and it knows it

The ride to Blanco was fun at first. I listened and sang along to Fleetwood Mac’s Tusk, a reliable record for a scenic drive, expecting to see the guys with each crest of a hill. But I kept not seeing them. I stopped on the side of the road a couple of times and tried to locate them on GPS, but if I had a signal, Dad didn’t, and vice versa. The album ended and I drove in silence, what-ifs bouncing around in my brain. Once the worry bug gets into your system it’s hard to shake. All of you family members reading this don’t need to worry because I am worrying on your behalf and then some.

I made it to the hotel, hoping they were already there and had just neglected to text. There was no sign of them. But we all finally had cell reception — whew — and I could see they were about 25 miles away. I checked in quickly at the Best Western, then headed back out, figuring they’d appreciate another break. It turns out I hadn’t passed them before because they’d been taking smaller roads to avoid traffic. 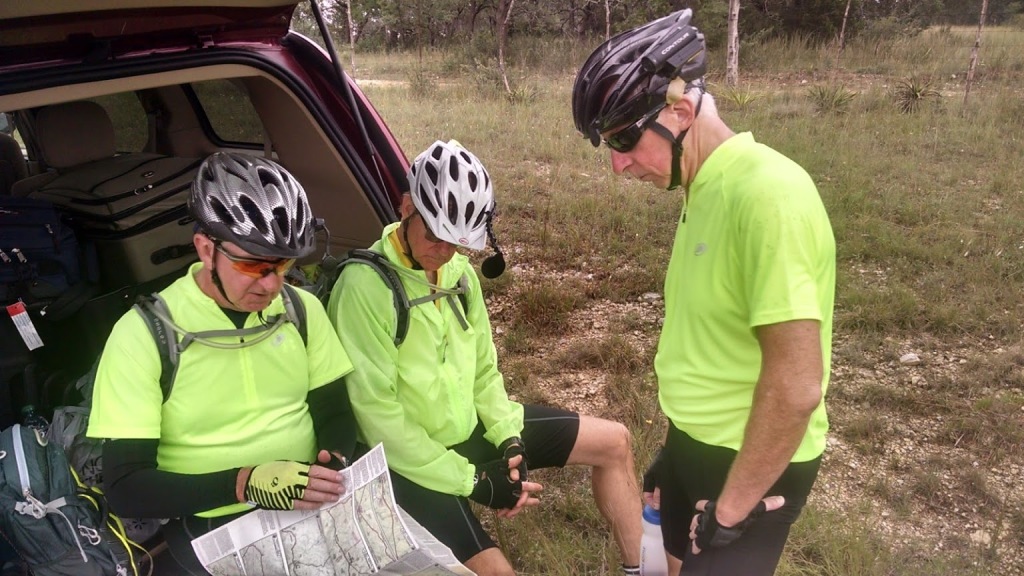 Map man Tim plotting the rest of the day’s course

Pit stop done, I picked up some snacks at the grocery store then headed back to the Best Western, where colored lights illuminated artwork in the hallways. More on that in the next post.

The guys arrived and did laundry, and we had a good time relaxing in my room while they waited for it to finish. Someone had left half a case of Coors Light in my fridge and Mark availed himself of one. He later asked if I’d taken them with us, and I told him I hadn’t because it would be bad kharma. 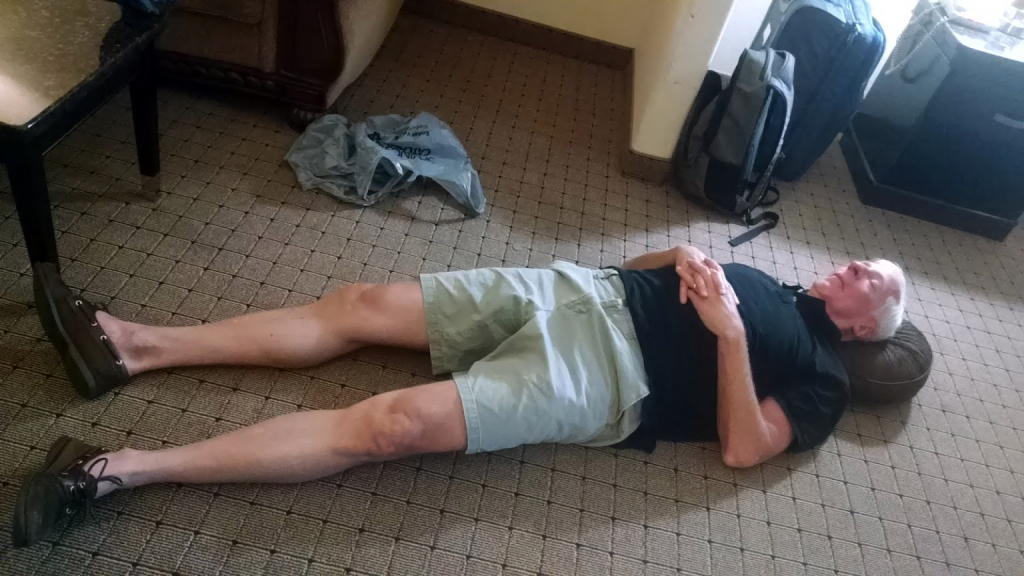 We headed into town for dinner. Blanco is even smaller than Bandera, and we wondered how any business could sustain itself. The restaurant I’d picked out had closed at 3, so we ended up the Oak Creek Cafe, a little tavern that gives out free pinto beans. The food was so-so — I find it mildly appalling that a restaurant would serve Ore-Ida fries — but their house red was surprisingly good.

Afterward we did a loop around the small town square. It was a pleasant night. 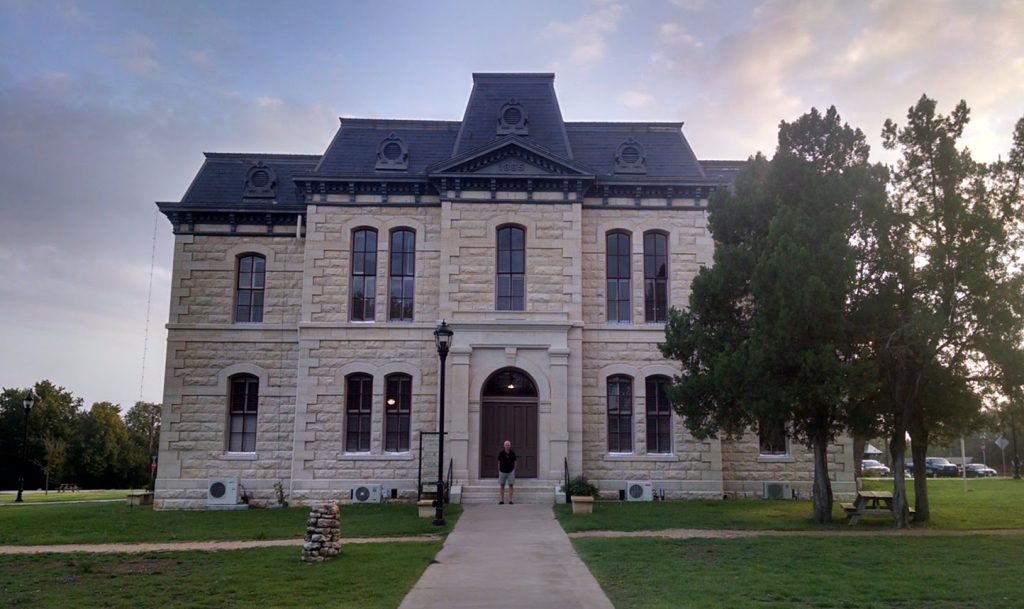 Dad wanted to be in this picture, and he is. 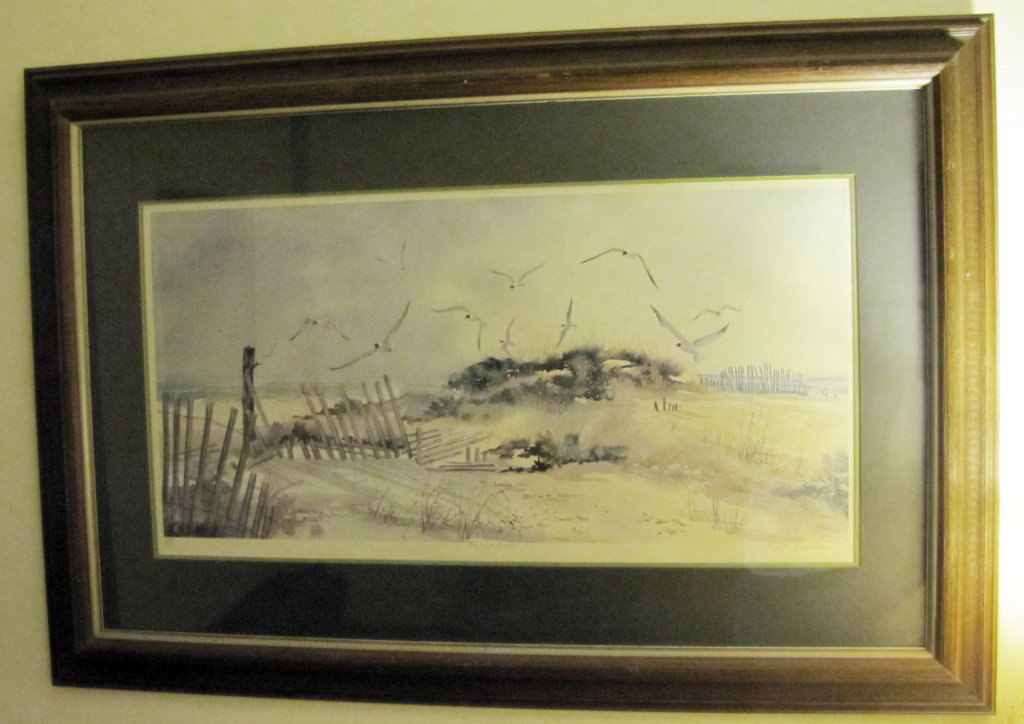 8/10. I was charmed to find this very Jersey shore painting in Texas. I’d normally barely notice something like this because I’ve seen dozens like it in beach houses in my lifetime, though usually in a pink or white frame, with a lighter matte. At first glance it looks like a typical beach painting, but is it? It’s more about the gulls than about the ocean; they seem to be circling for food. It’s slightly ominous, and I like that. Maybe this is standard beach subject matter and it just feels original because I’m viewing it in an unexpected setting. I genuinely don’t know right now.

5/10. It’s a nice painting done by someone with talent. It doesn’t particularly move me, but it’s not maudlin or insincere.

Outtake of the Day

I shot this video. Why did I shoot it in portrait view? How embarrassing. Never again.