Despite an overly soft mattress, and despite sharing a room with a dad who snores, I woke up on Thursday from my best night’s sleep of the trip. I know this because my Sleep Cycle app awarded me 93% sleep quality.

Breakfast at The Round Top Inn is usually served at 9 a.m. (and usually not served on weekdays, I later learned. Maybe they did it for us because so much of the town was closed.) Anyway, 9 was too late for the bikers, who were usually heading out around then, so Tim, the most “ask-y” of us in Ask vs. Guess culture theory, asked the innkeeper — who also happened to be the cook — if we could push it back to 8. The answer was yes.

It was a delicious, filling, sugary feast of French toast, fruit, and bacon. I cleaned my plate as usual. 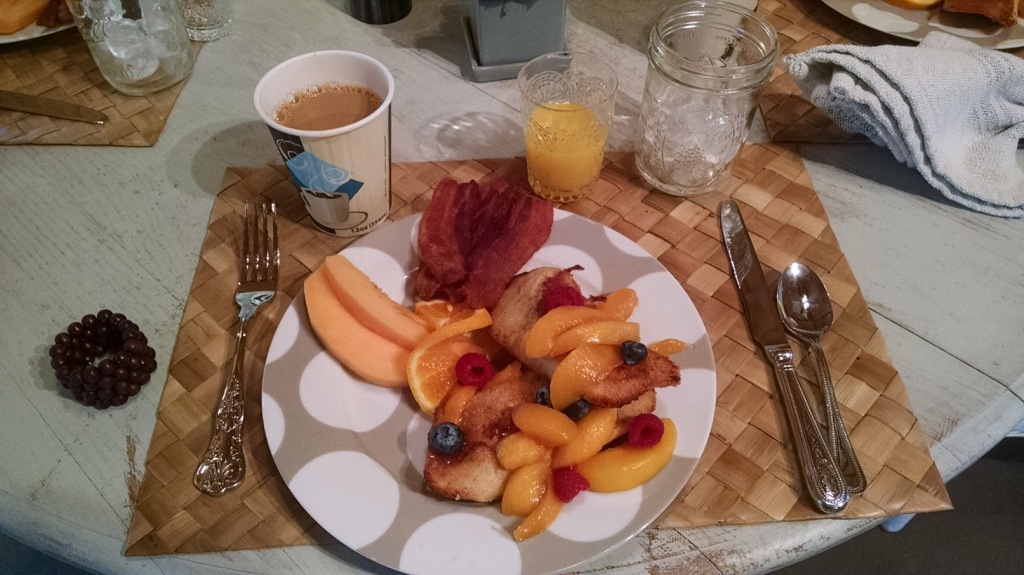 Probably about 1,500 calories, but who’s counting 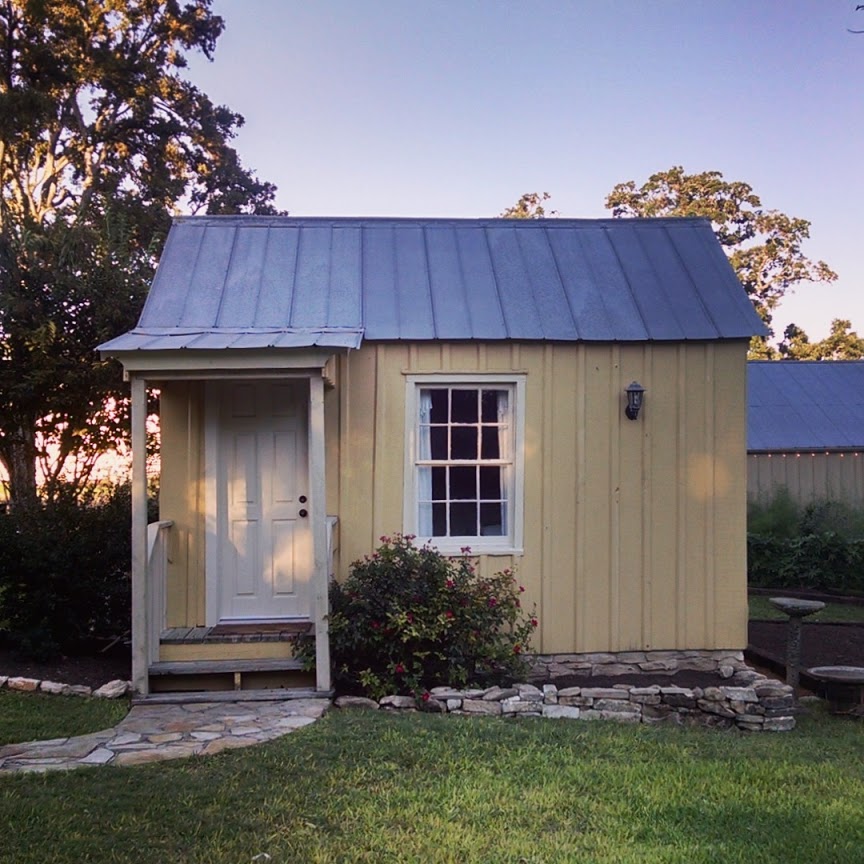 Another cute building at The Round Top Inn 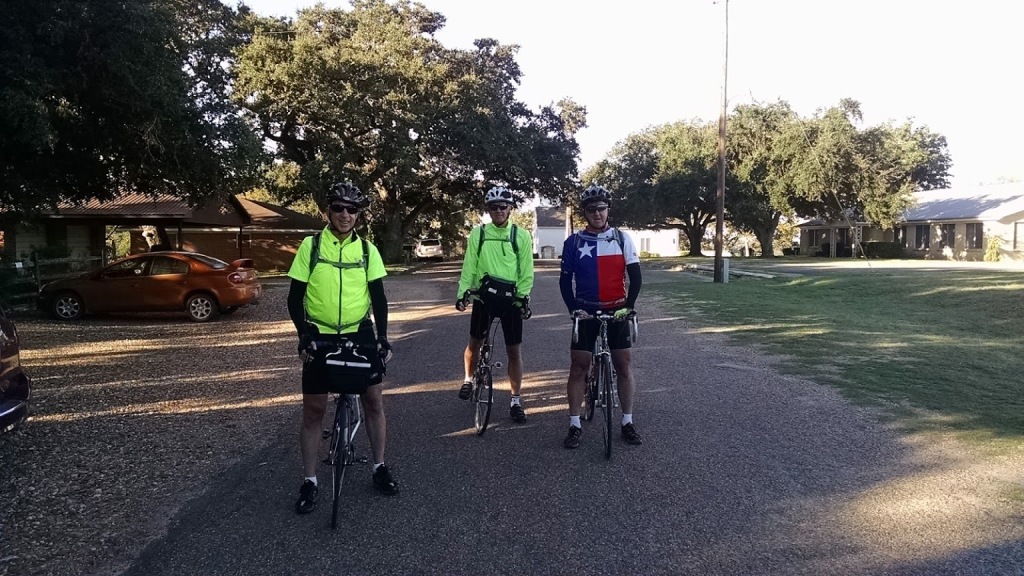 I didn’t stay at the inn much longer after the guys left. I heard the innkeeper cleaning Mark and Tim’s room next door, and, being a guesser (albeit one who’s trying to become more of an asker), guessed she’d want me to go soon so she could get that part of her day over with.

So I decided to drive to Navasota at a leisurely pace and stop for any and all photo ops. Here are a few selections: 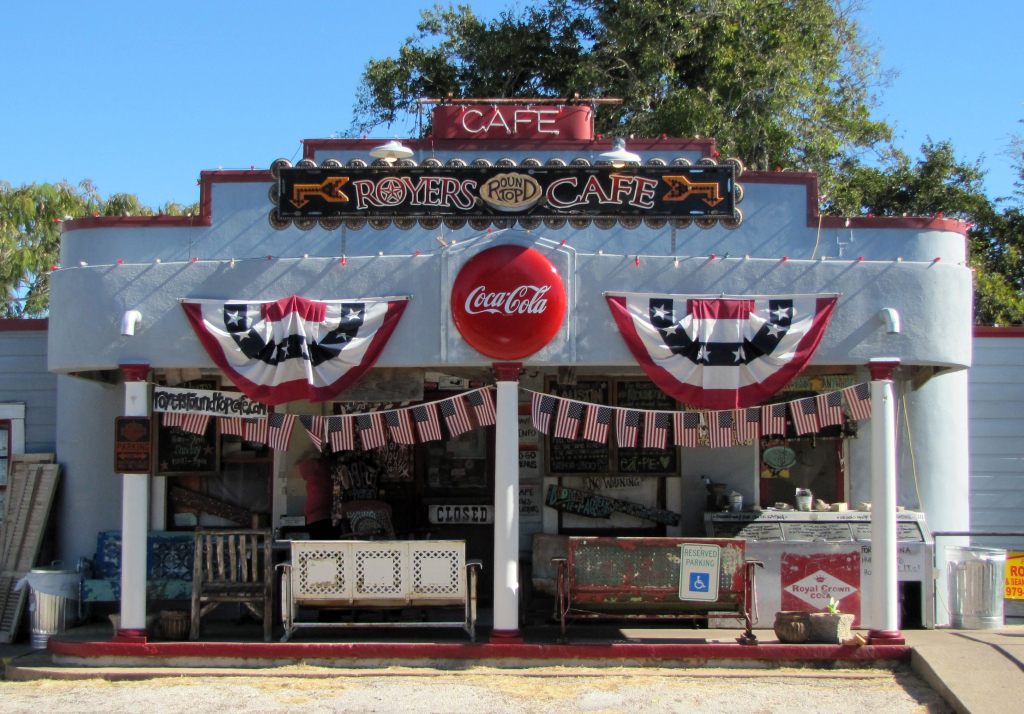 True or False: There is a person in this picture 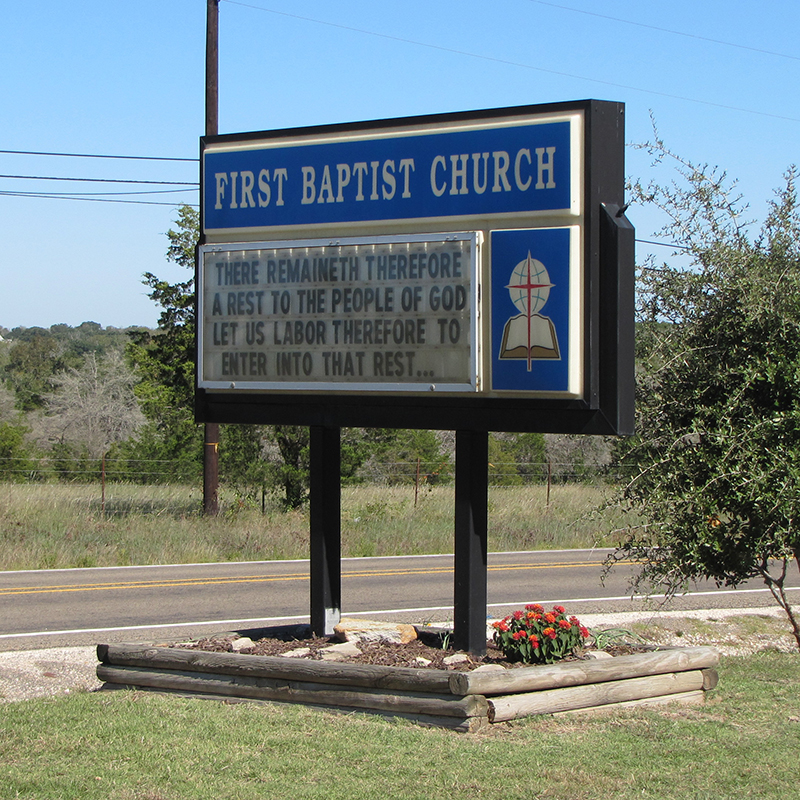 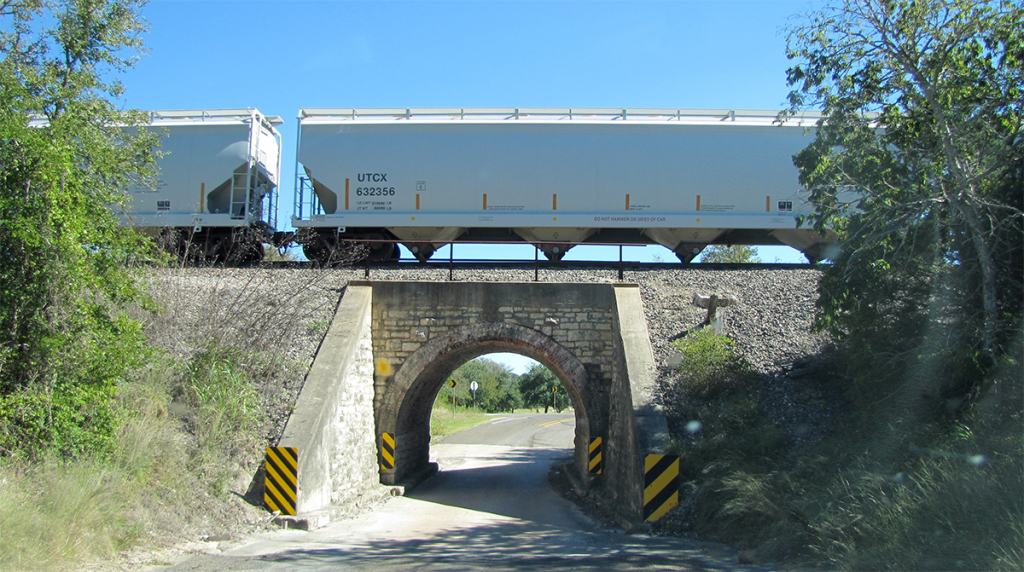 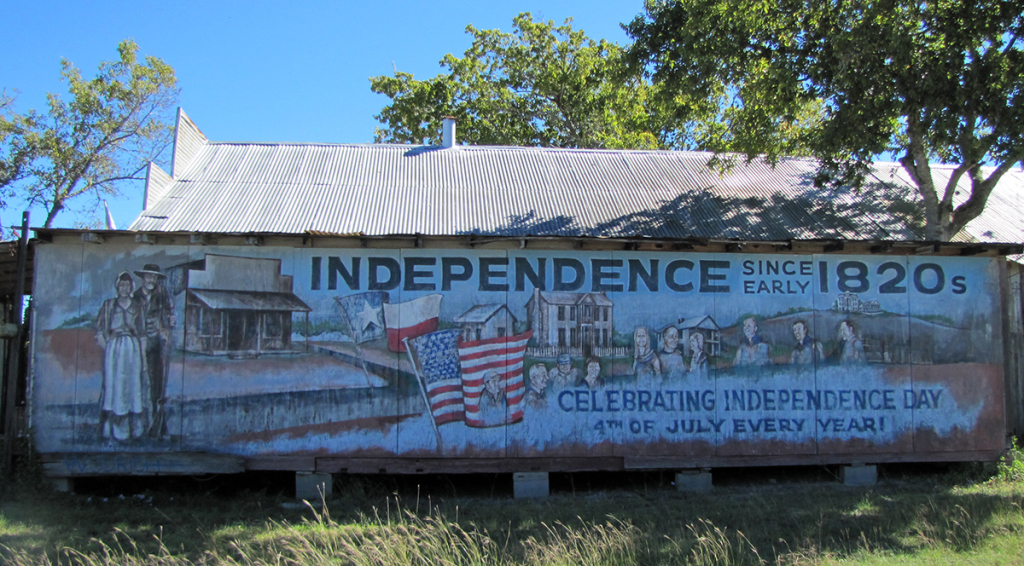 I turned onto a side street to take the Independence Day photo, and I’m pretty sure that the guys passed me en photographiant, because I ran into them right after this picture was taken. Ginger and I pulled off to the side of the road as usual, but this time I felt the car — and myself — tilt pretty severely in the grass before settling onto flat ground.

The guys were all in good spirits but were concerned about whether I’d be able to make it back up onto the road. I, perhaps somewhat in denial, didn’t think I’d have trouble at all. “It’s steeper than you think,” Mark said, and the others agreed. Tim scoped out a spot a few yards away and advised me to build up speed and then pull up onto the road just before a signpost. But that seemed risky to me, because there wouldn’t be much of a chance to look for traffic, and in my nervousness I might hit the sign.

So I went with my own plan, which was to turn a little bit to the right and swing Ginger around so her tires would face the hill. This was risky in a different way, because I’d have to swing back into my lane to avoid oncoming traffic as soon as I got on the road. I didn’t think of that until later, though.

I got Ginger into position, looked both ways to make sure all was clear, and gunned it. The front tires cleared the hill easily. The back ones, to my surprise, spun on the edge. My heart lurched in a brief moment of oh shit, but I didn’t let my foot off the gas, and within a few seconds I was back up on the blacktop, the air misty and perfumed with burnt rubber. No cars were coming, so I stopped and rolled down my window and gave the guys a thumbs up.

I will forever lament that there is no video of this, my finest minivan moment.

Of course, after my triumph I started experiencing phantom car problems. Does something feel off? Did I hurt you, Ginger? But no, Ginger was fine, everything was groovy again. And within a half hour or so I’d made it to Navasota.

Brief aside: L4 was supposed to take place in March of this year, but we pushed it back after Tim started having eye problems. When I was canceling our reservations for The Best Western back in January, their confirmation screen delighted me with its great example of poor user interface design: 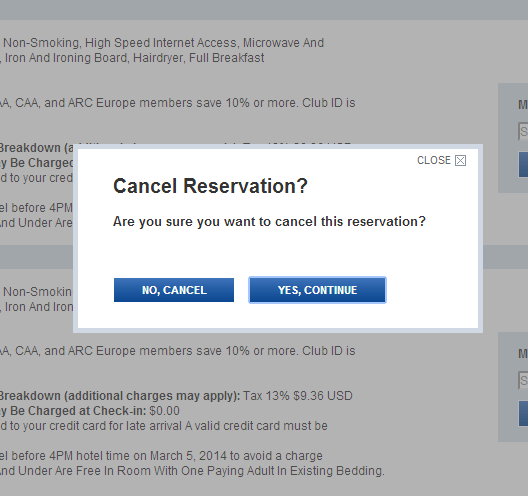 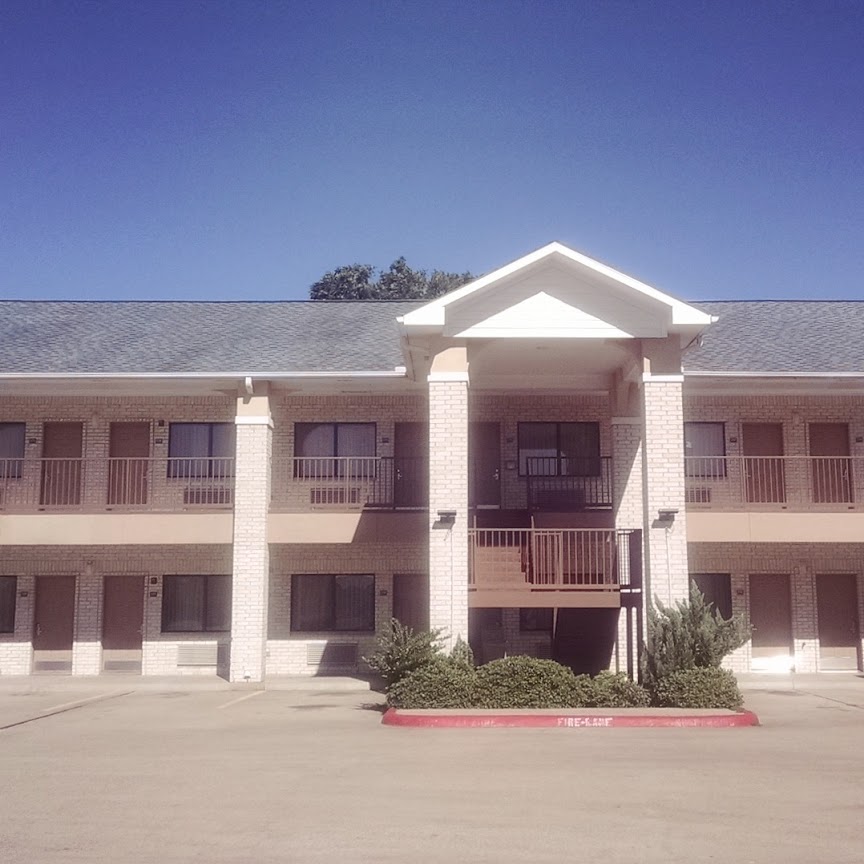 The Navasota Best Western looks like it was probably moderately nice in 1972. And it was okay in 2014, I guess, though my bathroom floor was dirty and the pillows were too puffy. And apparently Tim’s and Mark’s toilets were installed at an angle. Our other option was a Comfort Inn, and I suspect it was of similar quality.

I checked in, then headed out to pick up beer when the GPS app showed the bikers nearing town. I caught them just as I was pulling into Walmart. 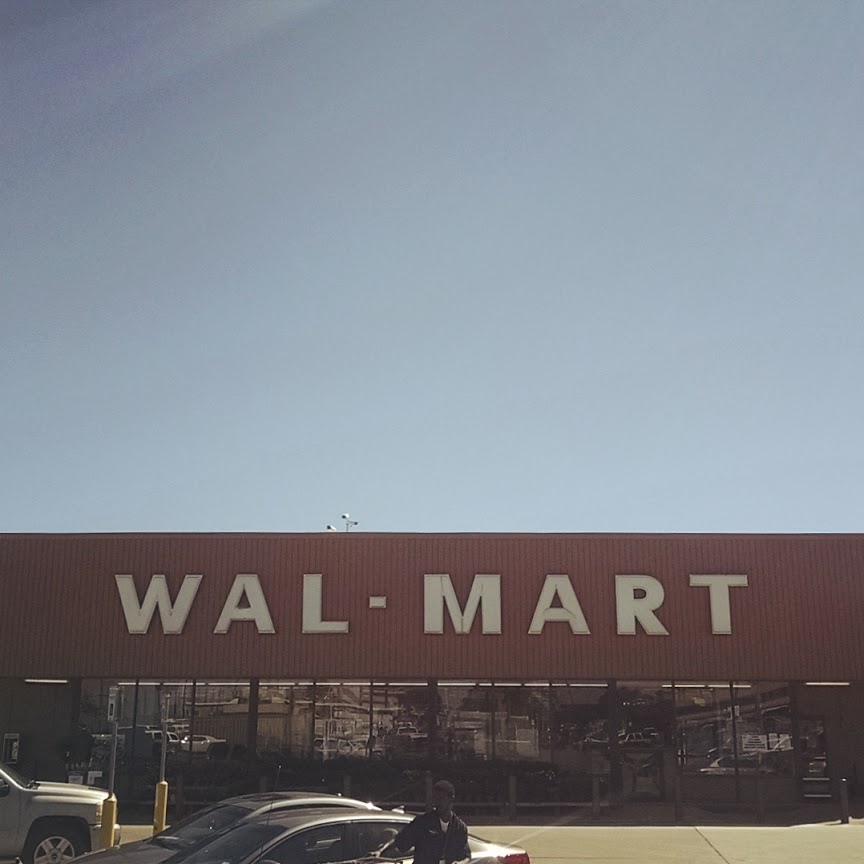 This was nothing like most Walmarts; it reminded me of a run-down Clover, a beloved discount store from my youth. The inside was cramped and dingy and looked as the outside suggests: a slightly disturbing 1988 alternate reality. Everything just felt a little wrong in there. There was no refrigerated beer, so I picked up a warm six-pack.

The guys had not followed my laboriously pecked out Google bike instructions and so had to approach the hotel from the wrong direction (meaning bike into oncoming traffic) rather than add three miles to their trip. The thought of this gave me some heart palpitations on my drive back. Thankfully the distance they had to cover going the wrong way was only a couple hundred yards.

We hung out at the pool for a bit, and Brian accidentally swam a lap with his Fitbit on (typical!). But he was lucky that day; it came back to life after the hot sun dried it out. 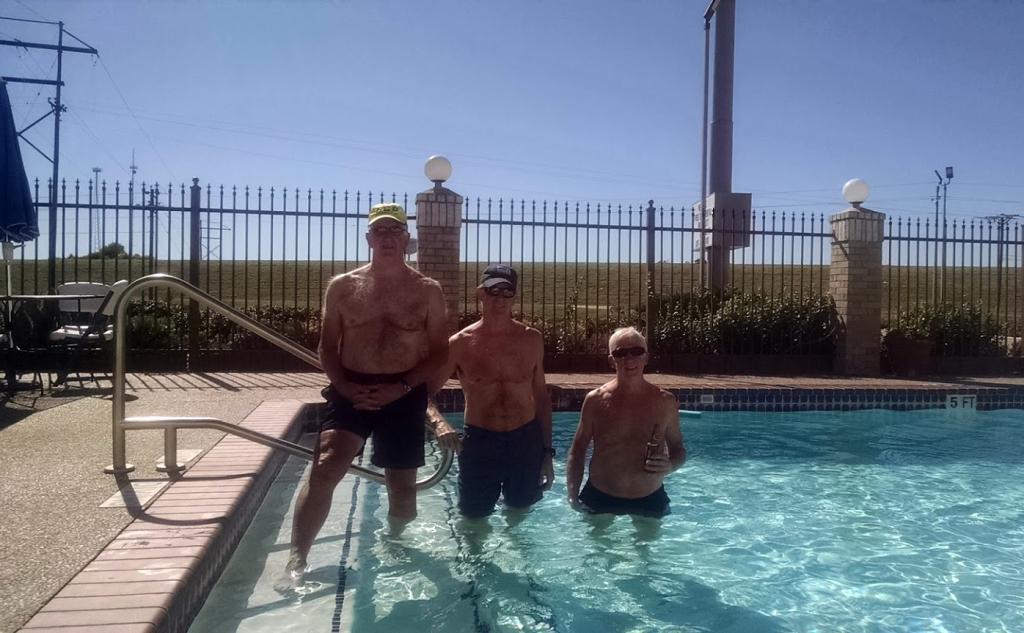 No Fitbits were harmed in the making of this picture

After the pool we all rested or worked or whatever for a couple of hours. I researched the three restaurant options in Navasota and decided on the barbecue joint, because we had not yet enjoyed barbecue on this leg.

And alas, we were still not to enjoy barbecue on this leg, because the place was lousy. I didn’t ride through the center of Navasota as the guys had, so my impressions have fewer data points, but my sense of this city is that it’s pretty poor. Having just skimmed the Wikipedia entry for it, it seems like it does have some charms, though, so maybe I missed something in my restaurant research efforts. Anyway, nobody likes to have a crappy dinner, least of all the SAG lady, so our last day unfortunately ended on a less than perfect note. 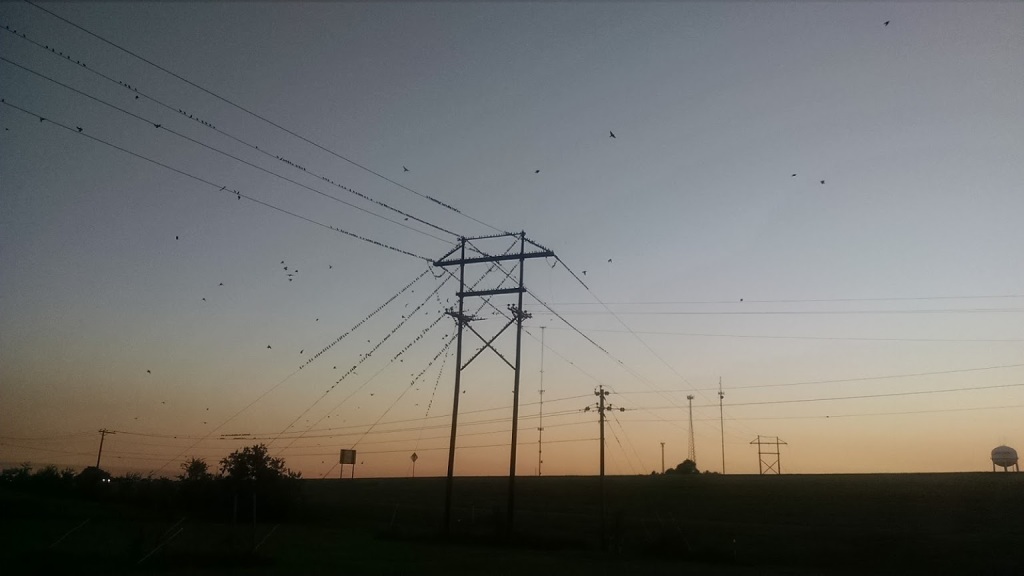 Back in my room, I was hoping to watch some postseason baseball, but the games had been played earlier in the day, so I turned on an episode of Anthony Bourdain’s No Reservations and half-watched it while I packed. He happened to be in New York City, and I naturally reflected on how different Navasota is from New York, and isn’t it weird that I’m here but watching a show about home, and I can’t wait to sleep in my bed again. But I also learned an obvious yet valuable tip: when in New York and in search of a bathroom, go into a bar and order a beer. Then you get a bathroom and a beer. Last weekend, after a long and quickly-turning-desperate search for a restroom in lower Manhattan, this advice flashed into my head, and within five minutes my problem was solved. Thanks, Anthony.

And most of all, thanks, Tim, Brian (Dad), and Mark for another experience that I will remember forever. 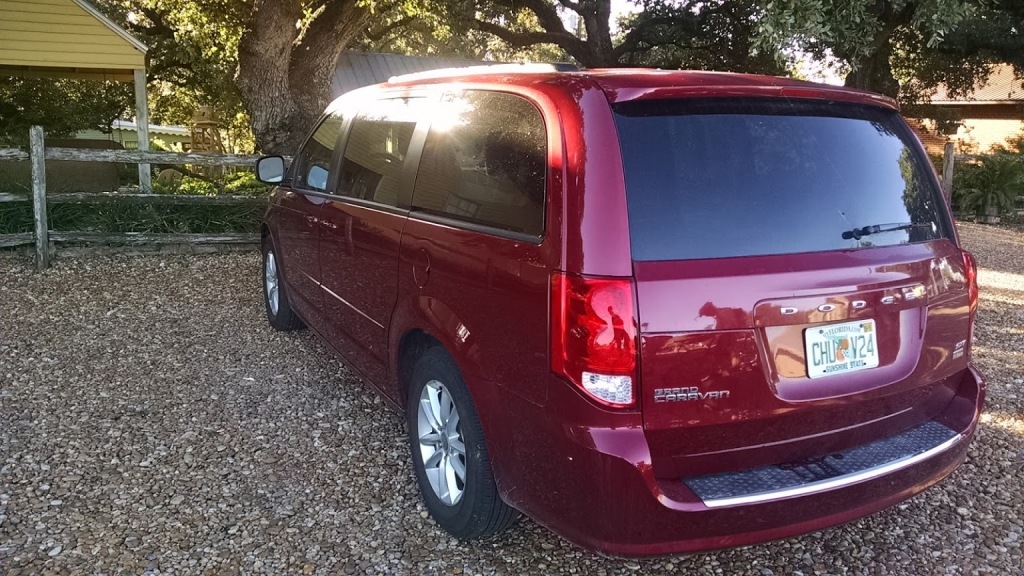 And, of course, thank you, Ginger, for your reliability and fortitude!

We have an unusual piece today: a very damaged but likely real work of art by artist Maurice Utrillo. 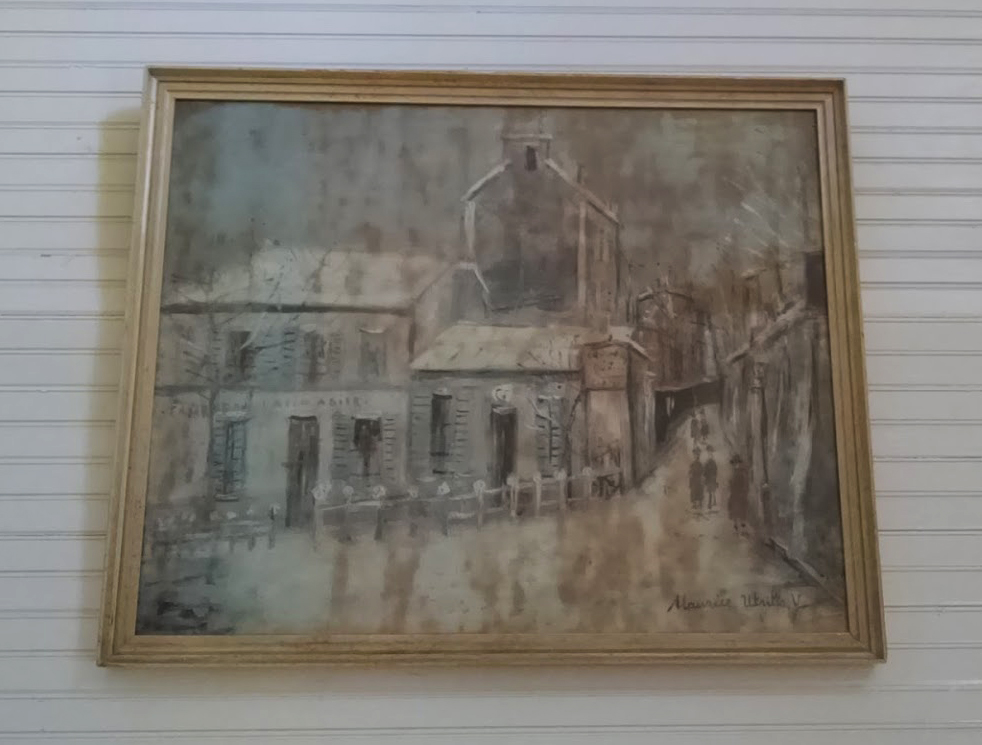 In searching for information about this I found this listing from 2005 from a site selling a reproduction of the piece (photo below). It’s quite a good reproduction, too, as far as I can tell. What a shame that the version at the inn was not better preserved. 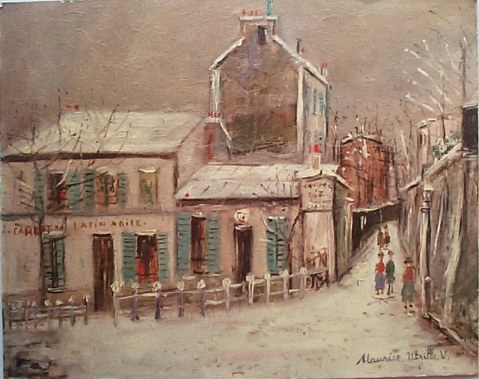 Now, is it possible that the inn’s version is also a reproduction? I suppose so. But I suspect that the owners, at least, believe it’s the real thing, because otherwise why hang something in such poor condition?

Scores will be based solely on the version I saw in person.

6/10. The fact that it’s damaged adds some romance to it; it’s clearly quite old, and has been around — who knows what sort of life it’s had? And it appears to be a cozy street scene. It certainly looks French. So it’s ticked off a number of B&B art boxes. But it is really in quite bad shape, which makes it somewhat unpleasant to look at. It’s difficult to experience any real feelings about it through those water stains. And in a certain frame of mind, late at night in your dim, remote Texas bedroom with no cell signal, it might just seem spooky and sinister.

6/10. It’s clear, even through the stains, that there’s real technique and confidence at play here. The composition, with its curving, inviting street and roofs of different heights, is pleasing, and it’s easy to imagine that this was an accurate depiction of a day in France long ago. But the color, which is crucial to understanding its festivity and warmth, is gone. So much has been lost, and it makes me a little sad.

But I don’t want to end with an expression of sadness, so here’s the art from the Best Western. It’s a bad photo but you don’t care: 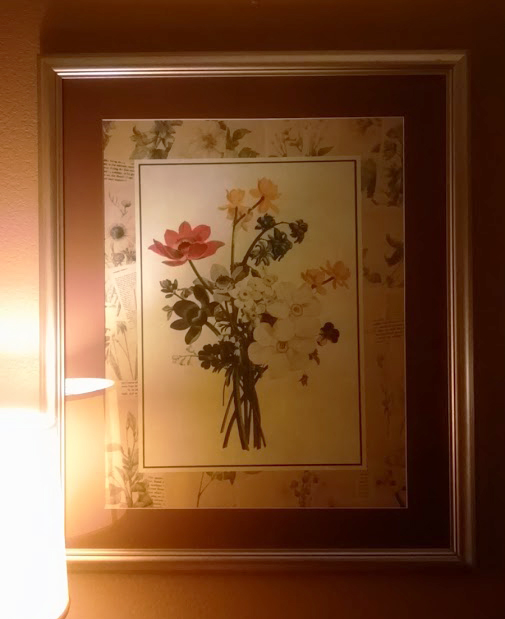 5/10. This seems like an older version of the mass-produced art chain hotels have now. It seems like it might have come from the same alternate reality as the Navasota Walmart. The funniest part about this is that the words in the background scraps are not at all legible. You’d think they’d be little bits of wisdom, like, “love is where your story begins,” or maybe snippets of Robert Frost poems, but they could be obituaries for all I know.

2/10. Why am I giving it a 2 and not a 1? Because a I promised a happy ending. And the flowers in the foreground are nicely executed.