Day 8: We Are the Champions

The morning of our last day didn’t feel particularly charged or different to me. We went through our standard drill, watching political coverage on the news over bowls of cereal in another Holiday Inn Express breakfast lounge, same as it ever was.

My dad had had an upset stomach overnight, so I offered him some off-brand Imodium I’d made a friend buy for me in a hotel lobby in Kansas City. Dad had never used such medication before (I learned with surprise), so I had a hunch it would be especially effective. 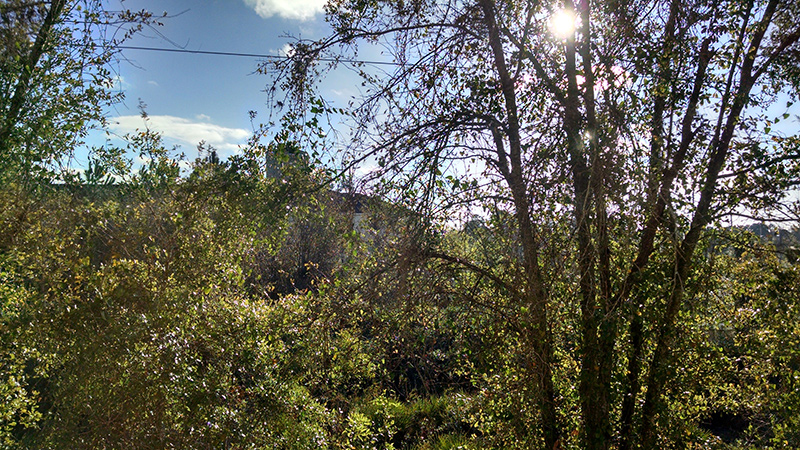 From the hotel hallway: It’s a mess out there 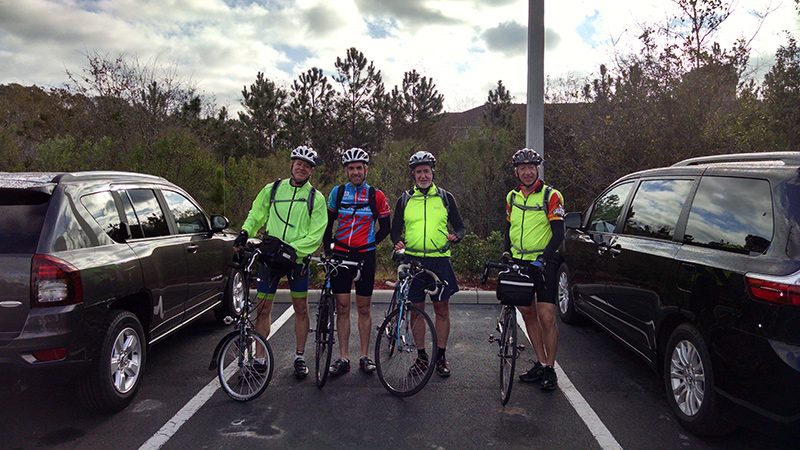 The day began cool and only got cooler and grayer, a bummer for their very last southern tier trek. It was a short ride, though, and the guys expected to be in St. Augustine around noon. I kicked around in the room for a bit, then packed up and headed out of Palatka.

The drive was flat and cloudy. I tried to savor it, but my heart couldn’t fully comprehend that this was the last time I’d be doing this. 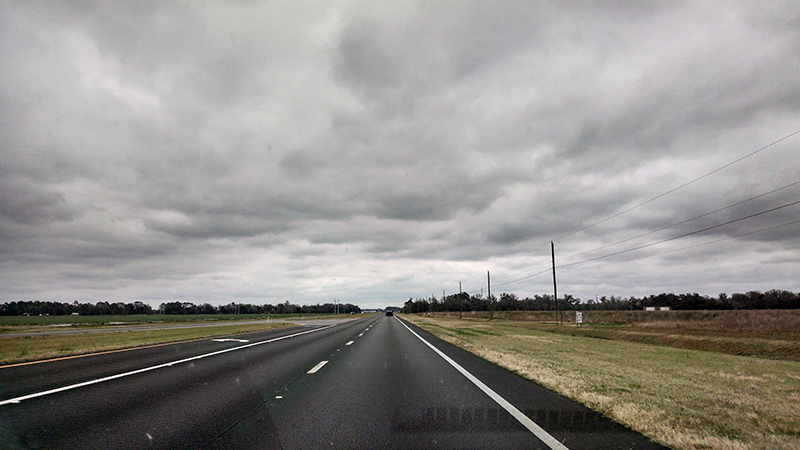 I wasn’t sure where we would actually be meeting beyond “at the water,” but I tried to time my drive so that I’d make it to St. Augustine at the same time as the boys, checking Dad’s location through our GPS app. GPS tracking of other humans might be creepy in theory, but it’s also really useful, and sometimes I wish all my friends had it.

I made a quick stop at a small grocery store for beer and a bag of never-to-be-eaten chips. Most of the other customers were college-age stoners, probably students at nearby Flagler College. The person in front of me got carded and I did not, but I consoled myself with the memory of being carded the day before. When I got back to the car I saw that Dad and the gang were now in downtown St. Augustine. I still didn’t know their plan and was now a few miles behind them. I headed in their direction.

My first impressions of downtown were of congestion. Cars and tourists clogged roads; traffic crawled. Some of the crowded scene looked charming, some less so. I began to get antsy. The guys started moving away from town in search of the Atlantic Ocean. I continued my slow pursuit, eventually halted by a drawbridge. 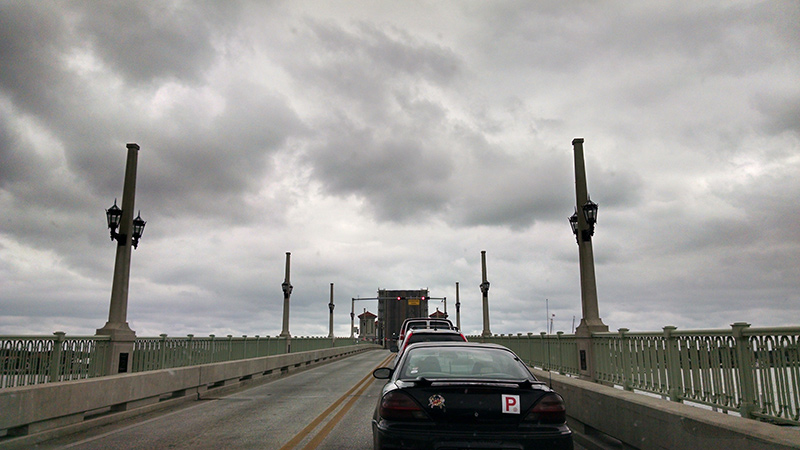 The bridge is up

Dad finally called while I was stuck on the bridge and told me to follow signs for Anastasia State Park. They would wait there and we’d head to the water as a team. Finally I started getting excited. This was it. They had really done this. The chance of a trip-ending catastrophe now was essentially zero. They’d made it.

I arrived at the park entrance just as Dad was paying the fee. He biked alongside Onyx for a while and we chatted a bit, mainly about the miraculous power of Imodium. Dad was in a great mood, and it made me happy to see him feeling so good. After a couple minutes he appropriately broke away to rejoin his brothers and Matt for the very final moments of their ride.

Here’s a shaky video of the homestretch (culminating in me trying to get out of the car without having put it in park, then running to catch up with them):

I caught up with them. 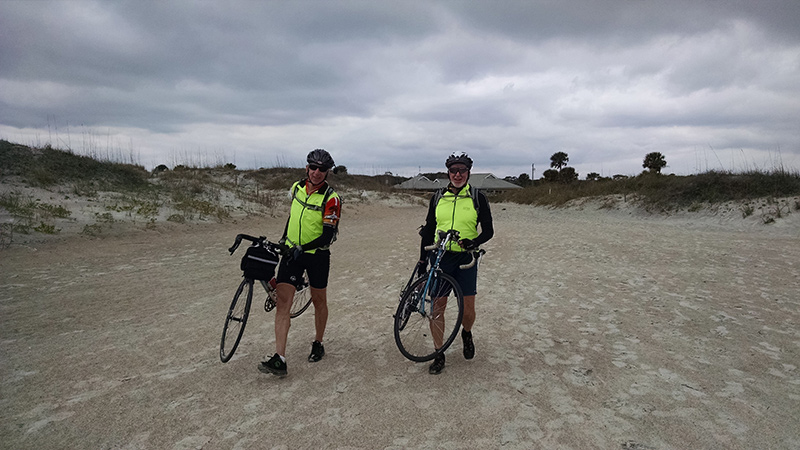 Bringing the bikes to the water 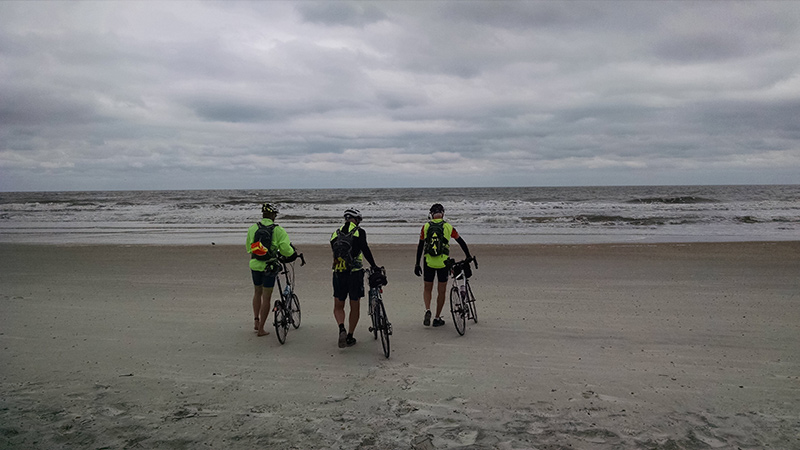 The symbolic dipping of the tires in the ocean felt genuinely momentous. The brothers had left San Diego on March 2, 2012, four years and two days before, with no solid sense of what this experience would be like; they had yet to face chip seal roads, intense headwinds, nerve-wracking bridges, dog chases, falls, achy and sleep-deprived nights; they had yet to encounter the otherworldly beauty of the desert, the lawlessness of the southwest, the quaintness of Texan towns, the friendliness of Floridian bike routes, the singular charm of America as viewed by bicycle. The one thing they did expect was a lot of laughter, and laughs were certainly plentiful.

The bike trip sort of took place out of time, six stretches of eight or nine days punctuated by many months of not-the-bike-trip. Many people who cycle across the southern tier do it in a single go, and I imagine the physical accomplishment feels especially profound upon reaching the Atlantic after two straight months on a bicycle. But I think the passage of four years grants additional weight to the brothers’ accomplishment; they started out old and they were four whole years older by the time they finished.

Seriously, I am so proud of all of you. I know it wasn’t easy but you made it look like it was. 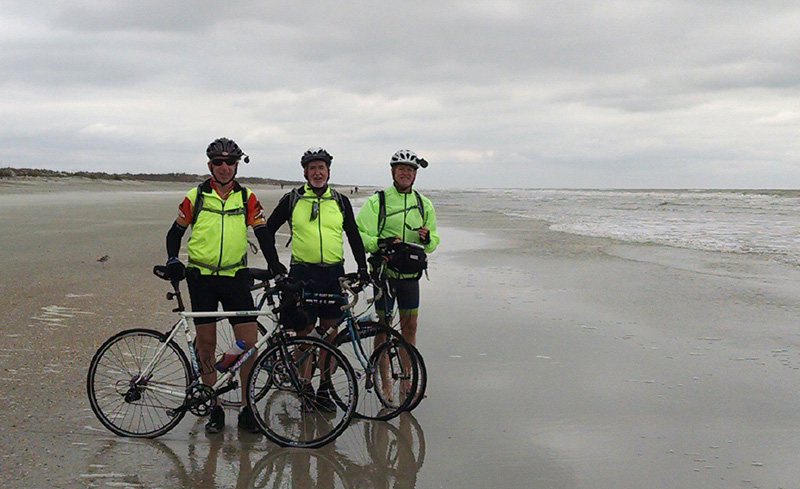 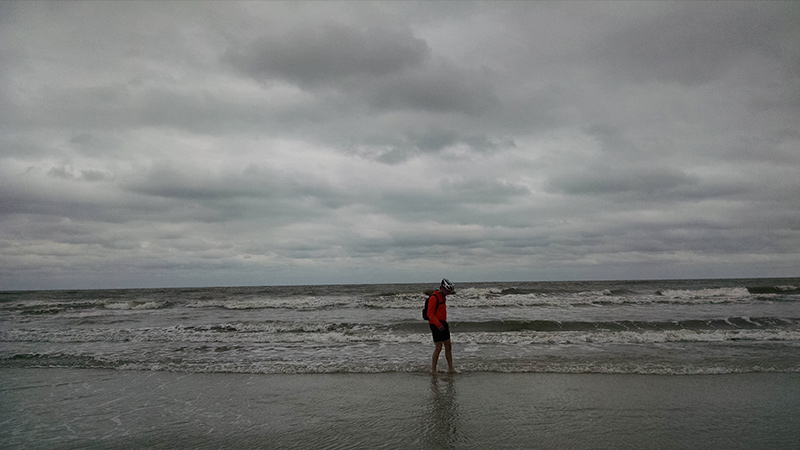 We took pictures on the cold beach and spent a few minutes admiring the coast and the clouds. The wind blew my scarf and hair around. I let the tide splash around my feet and found the water surprisingly warm. Finally we headed for the hotel. We were all famished.

When we got there, though, we learned our rooms wouldn’t be ready for a while, some for a couple hours. The guys got to work dissembling their bikes outside while I ate snacks. 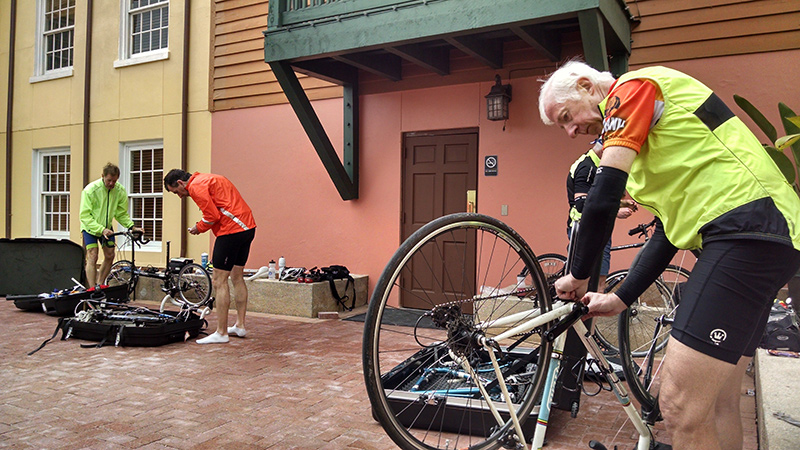 Breaking down the bikes

The room delay made it so that we never got to have a proper post-ride beer, but we’d soon make up for it.

After showering with some shower beers, Matt, Tim, and Mark headed out to meet up with Matt’s father-in-law, who happened to be in town. Dad and I strolled around a bit and landed in an Irish pub for a late lunch. It was Friday during Lent. Dad wanted a cheeseburger and I wasn’t about to remind him of the no-meat rule. Mark showed up a little later and had his own cheeseburger, then we headed to Castillo de San Marcos, a fort built by the Spanish in the seventeenth century primarily to protect St. Augustine from the threat of British siege. 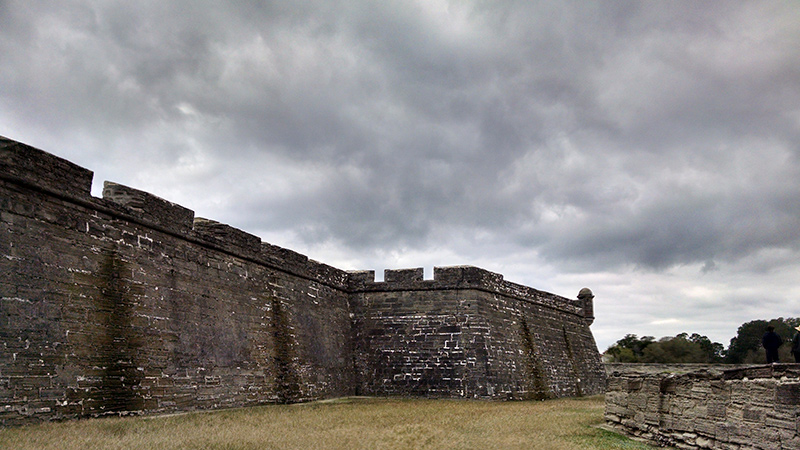 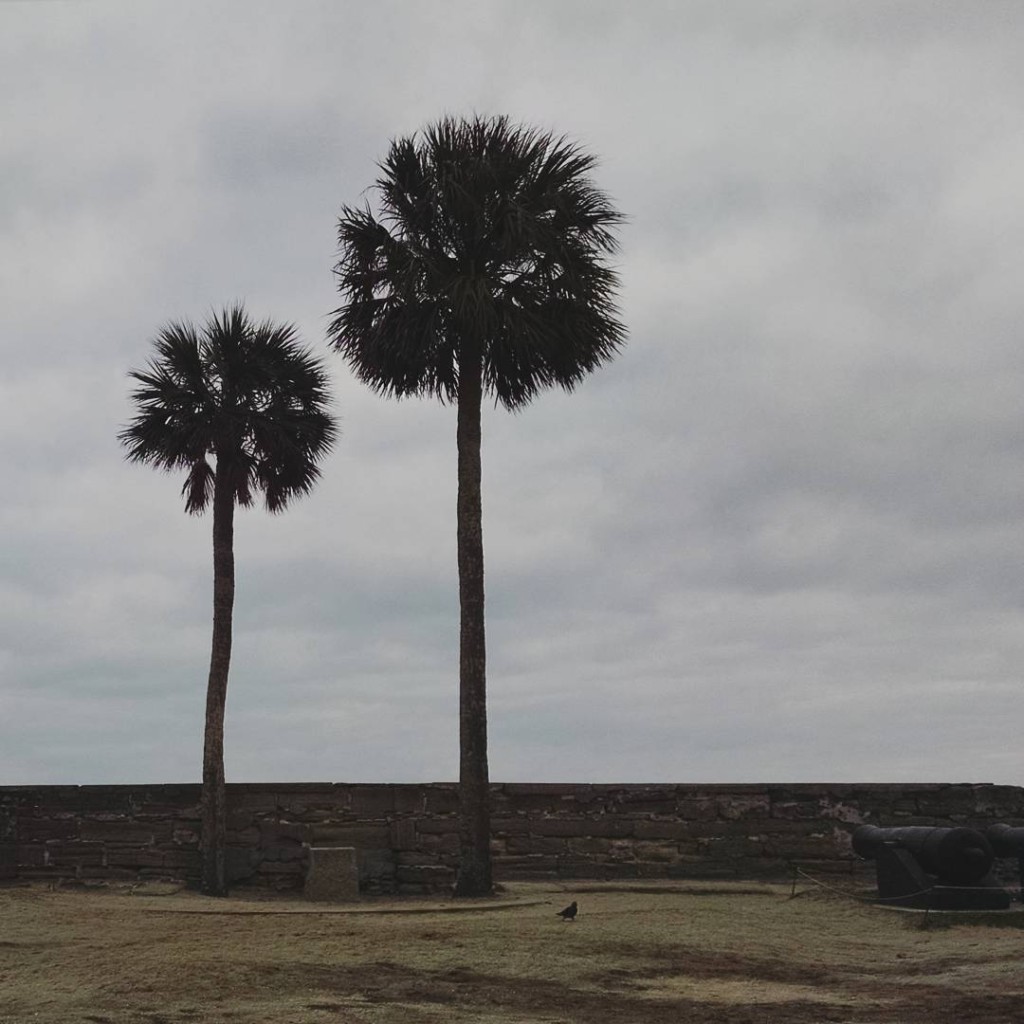 Palm trees at the fort 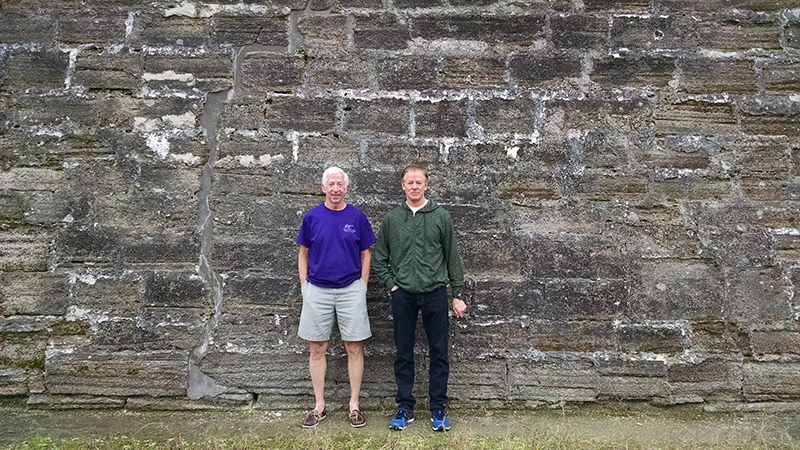 We walked around the outside of the fort — I noted that two teenage girls who were taking selfies when we arrived were still at it when we left twenty minutes later — then met up with Tim and Matt. They were ready for dinner. So were Mark and Brian, despite having eaten less than an hour before.

We settled in to an empty steakhouse and enjoyed a very satisfying meal. During dinner I took out my audio recorder and asked the guys to talk about what they’d learned about themselves on the trip. I’ve got at least one more entry to write and will include some clips with my final reflections. 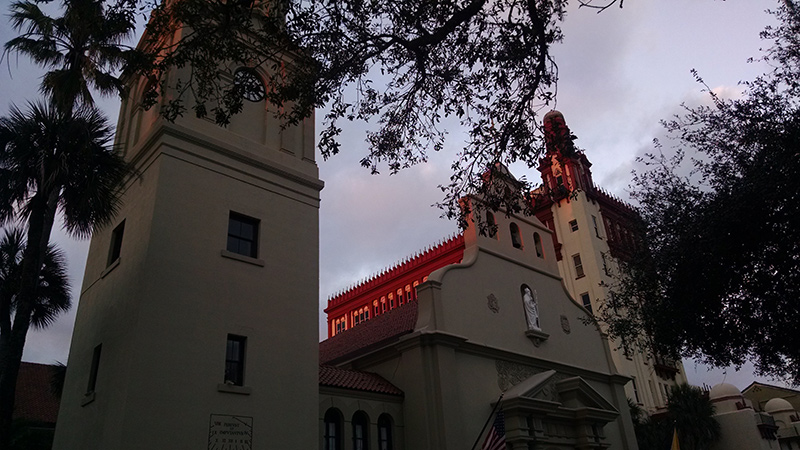 The sun sets on the cathedral

The weather improved as the day grew older. We meandered around the agreeably kitschy streets of St. Augustine, stopping for ice cream, taking in the tourist scene, eventually ending up in the lounge of our hotel, the Hilton. The Hilton was our splurgiest spot of the trip, but it was worth it (said the person who didn’t pay for any of this).

And then all of us except for wise Mark proceeded to get plastered in the low-key way that Sullivans do. 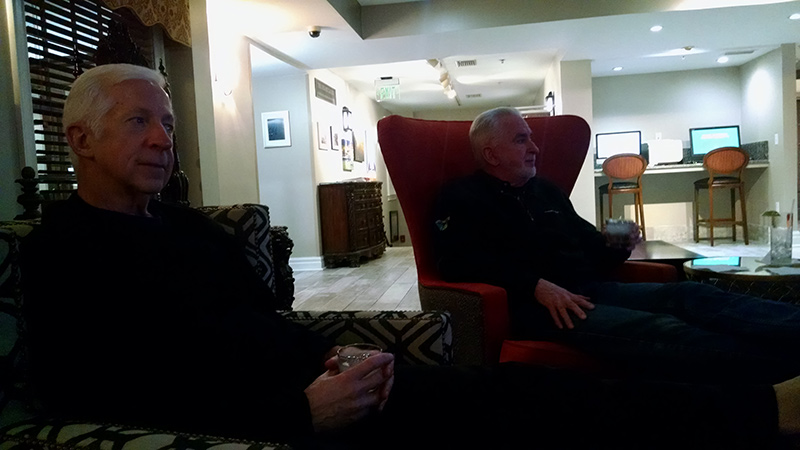 Fireside drinkfest — can you feel the energy?

We had a truly cozy and wonderful time. This picture doesn’t do the setting justice, but there’s a fire behind Dad and a TV in front of Tim, and the lounge feels like a wholly different space from the fluorescent hall in the background. The television was tuned to incessant insane election coverage, and it felt good to agree with these GOPers about the direction our country should (or at least shouldn’t) take. We talked about other things, too, but who remembers what now. Well, I do remember lighting into Matt for not being willing to divulge how much money he makes — sorry, Matt! — but aside from that it was all good vibes. It was a proper celebration of the cyclists’ grand achievement, and while I would regret it a little the next morning, I don’t in the long run.