Posted by Chris on August 26, 2016
Posted in: Uncategorized. Leave a Comment

We didn’t have to do any compromising about when breakfast would be because we were told that the earliest it could be was 7:30 a.m. It was a bit of a bust though – it didn’t feel like there was enough food for the guests who would come after us. The breakfast also lacked variety – no hardboiled eggs, nothing resembling cereal or muesli, no yogurt, no fruit – just rolls, bread, butter, jam, cheese and lunchmeat. At least we could make our sandwiches, and since it was going to be such a long day, we each made two. Somehow, I was even able to stuff them into my very small bag without totally crushing them.

This was the day that I was most worried about on our trip; not only because it was our longest day, but also because I was worried we might have a strong headwind so close to the west coast. However, the forecast for Saturday called for rain and a tailwind, and it was correct.While we did get wet and a little cold (and I even used my rain jacket for the first time since Ystad to Malmoe), the 12 mph tailwind and flattest terrain of our trip made this one of the easiest days for us. My legs didn’t hurt, my knee didn’t hurt and my butt didn’t hurt either. I spent the majority of the day in the big chainring and often looked for gears that were bigger than I actually had.

We had some minor trouble finding our way out of Ribe and worried that the overnight rain on the cobblestones might cause us to slip and fall, so we walked our bikes out of the center. I was a little overdressed and had to stop to remove a hat and the rain jacket I had put on way too early.

Once we got on route 11, traffic heading in the other direction really picked up – most cars had German license plates and most were from cities in Schleswig-Holstein. It reminded me a lot of the Saturday morning Ocean City handing over of keys that we luckily no longer need to partake in. Eventually, the traffic would pick up going our direction, but by then we were on roads that were a bit wider.

We accidentally ended up on a highway again and took a break under a bridge while we debated the best way to get off it. I was for walking our bikes up the on ramp with the cars heading in our direction, but we ended up crossing 4 lanes and kind of doing the same thing since we couldn’t quite get to the off ramp. We navigated through Varde a little and I ended up accidentally losing the guys while getting on 181 (sorry!). They still would have found it without me having gone back for them.

We took another short break in Noerdre Nebel when the rain started to pick up. My dad and I started to get a little cold here, so I opted for the rain jacket and my dad opted to cut the break short to get moving (and warm) again. I’d say that both were good ideas.

As you can probably tell from this blog entry, the day was basically uneventful. The rain died down, the sun came out, the landscape outside of Hvide Sande was beautiful and the ride was easy. Tim got another flat that he first tried to pump out without changing the tube, but he eventually changed the tube. As far as I can recall, I led from at least Hvide Sande and didn’t feel like I was doing much of any work. We stopped at a small shop at one point along the way and bought some candy bars and soda (lunch of champions?). My dad wanted to buy Neil a truck but had no way of carrying it – but you could tell he was excited to see his grandkids again (as I was excited to see my own kids after a week)!

We arrived at the vacation house about an hour before my wife and family. Some of my clothes had even become dry by this point despite the heavier rain (my shoes and socks, however, were still pretty soaked and I really couldn’t wait to take a shower). 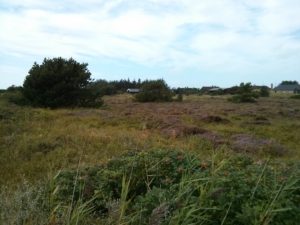 Typical scenery for the day. 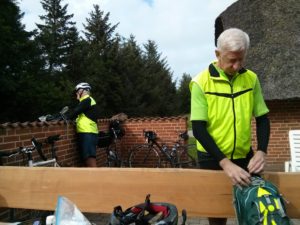 We have arrived. The guys prepare to break apart their bikes.

At any rate, it feels great to have ridden across Denmark – it was one of my goals for a long time. Back when I was studying in Kiel, I had this completely ridiculous phantasy of biking around Jutland and studying Danish dialects, particularly along the border between Germany and Denmark. I remember even thinking that I should get a big Amazing Race style rucksack for this, not realizing at the time that it’s impossible to bike any significant distance (or at all?) with such a backpack on. However, I did make it across the country with just a backpack. Although I should have gone with the medium size (and may switch at some point), I would like to thank Osprey bag, my Cube cyclocross bike, Google Maps and navigation, the iClever Bluetooth keyboard (best $16 ever spent? – this thing is maybe 5 mm thick and weighs 200 grams at most) and my Tigr bike lock for making this trip possible. But more than the inanimate objects, I would like to thank Tim and my dad for making this trip a reality, as well as my wife for allowing me to go on the trip and taking responsibility for the kids for a week. 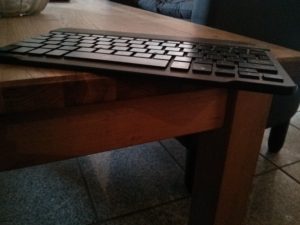 The keyboard I used to write all my blog entries – even after being reunited with my computer.

Lastly, I would like to thank Denmark for its commitment to cycling – the bike lanes, cycling-specific traffic lights, bike clover leafs, etc. I’d love to come back and do some of North Jutland or other places we missed. It was an amazing adventure that I’m anxious to repeat. Vi ses igen!