Posted by Chris on August 21, 2016
Posted in: Uncategorized. Leave a Comment

If I remember correctly, the compromise Friday morning was to meet for breakfast at 7:15 a.m. We each had our own rooms in Soenderborg, so I slept quite well. I succumbed to peer pressure and made a sandwich at breakfast to take with us on the way to Ribe. By the way, this was the painting I was facing while eating breakfast. Beth, can you evaluate this hotel art for me? 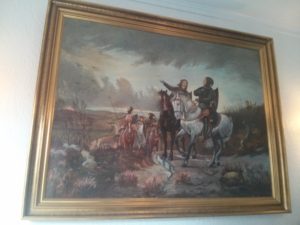 Hotel art of the day.

The day was just gorgeous. For the first time, I felt compelled to take my phone off my bike’s stem just to take pictures of what I was seeing while cycling (it’s not easy getting it off the stem while riding, nor is it easy to take pictures while cycling.) I didn’t do this enough, unfortunately. 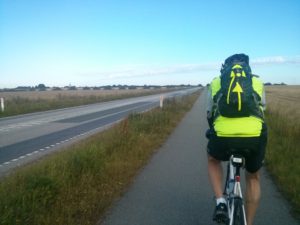 Dad speeding out of Soenderborg. 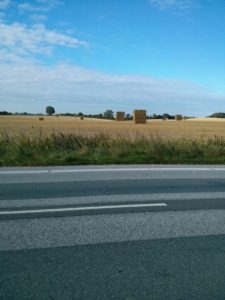 A picture that didn’t come out as well as it should have. It’s hard to frame while riding.

We took the bike path coming out of Soenderborg and ended up going through a clover leaf made just for bicycles. The guys were really impressed – as we’ve all been with the bicycle infrastructure in Denmark. The constant question: why can’t we have this in the States? It’s truly been a breeze cycling through Denmark.

Speaking of a breeze, we had a tailwind mostly all the way to Ribe, which made it all the more enjoyable. I think Tim suggested that we head north towards Vaernes along the coast between Soenderborg and Aabenraa instead of heading straight to Aabenraa, so thank you, Tim. This was probably the prettiest stretch we did, rolling hills, sheep, a fjord to our right – I have to come back here at some point and bike this stretch again. 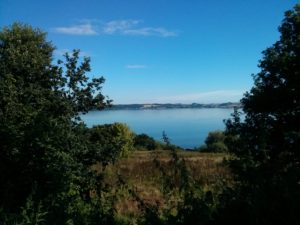 We bypassed Aabenraa and skipped Haderslev entirely. I’ll show you these cities one day, dad. On the way out of Aabenraa, I saw my first lawn-mowing robot doing a very haphazard job – definitely not making baseball field lines.

We continued to make great time but this is where I started to get really hungry – my constant problem throughout this trip: I can’t stuff enough food down when it’s time to eat and just need to eat more frequently than the guys. One rule of cycling is if you’re thirsty, it’s too late. You have to drink in anticipation of thirst. The same applies to hunger. In other words: I was about to bonk. I told the guys “I’m a little hungry!” meaning “I’m starving!” (because I didn’t want to interrupt our pace until I couldn’t take it anymore), but it was two against one and they were loving the pace, so we continued for another ten minutes until we came to hill and took a break. I then proceeded to eat more than my stomach could handle and felt totally sick. I think if I join the brothers in another BBR, we’re going to have to do a little more compromising with regard to eating.

But after eating, I did get the energy I needed and pulled way out in front of the guys without trying… until my butt couldn’t take its sixth day in the saddle. First it was my legs holding me back, then my knee, now it was my rear end.

We pulled in to Ribe quite early – a little before 2:00 p.m. Our hotel was “Den Gamle Arrest” – the old prison. We hadn’t told my dad where we were staying that night, so when we pulled up to the hotel, Tim said “You’re under arrest!” My dad didn’t know what Tim was talking about at first but once we told him we were staying in an old jail, his reaction: “Cool!” Tim ended up not being a big fan of the place, but my dad loved it. It was right in the middle of the main square, so the location couldn’t have been better.

The proprietor gave us a history lesson of the place as well as the city and suggested a walking tour that we weren’t really up for. After showering and changing, the guys headed to the main square and started ordering beers, but it took a while for them to get served (they even switched restaurants since no one came by at all at the first one). The beers served at the Dagmar, by the way, are excellent. I particularly liked my Belgian IPA from Schioetz. We had a nice discussion with our waitress about living in Denmark – born in Germany and a citizen of Bosnia-Herzegovina, she’s been in Denmark since she was four years old. 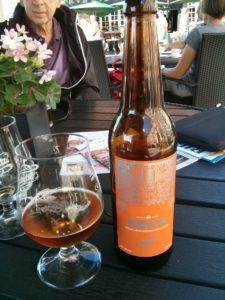 Probably the best beer in Denmark.

We headed for the church tower and climbed up to get a bird’s eye view of the city. This was my third time climbing the tower and I remembered that I learned the German word for “steep” climbing it with Antje back in 2004. 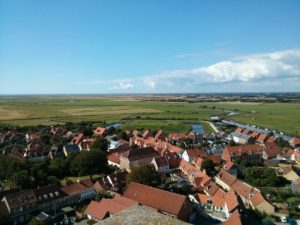 A view from this tower. 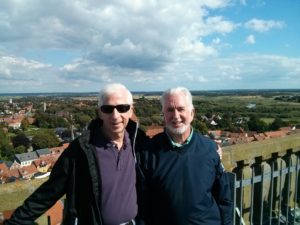 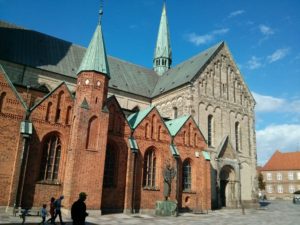 The church in the main square.

We walked around the city a bit before returning to the Dagmar for dinner and more beers. It again took a while to get served, but the dinner was great. I had the spicy spaghetti primadora which wasn’t spaghetti at all but rotini, which was more preferable anyway. Based on Saturday’s ride, I think my carbo-loading attempt worked. It was either that or the banana split on the Belgian waffle (my first banana split!).

I finished the evening by watching the Olympics on Danish TV for a while until I finally was tired enough to sleep. Dad’s snoring wasn’t that bad.