Do you listen to podcasts? If not, I have come here from 2005 to tell you that podcasts are a great way to entertain yourself while cooking, cleaning, attempting to nap, and riding in airplanes. The internet kept telling me to check out Serial, a non-fiction investigative podcast that unfolds in real time. From the Serial site: “We’ll follow the plot and characters wherever they take us and we won’t know what happens at the end of the story until we get there, not long before you get there with us.” It’s from the creators of This American Life, and while their peculiar, wistfully matter-of-fact public radio announcer style of presentation irritates me, it’s also very effective. My first flight flew by, and I was sad to run out of episodes.

On the second flight I listened to some guys talk with Jeff Bridges about how to have a successful marriage. Jeff is charming, if a little wackadoodle. He may be one of the few remaining people who uses the word “groovy.” (Has he been saying “groovy” this whole time, or is this a post-Lebowski affectation?) The key to a successful marriage, Jeff says, is to recognize that each person has his or her own story, and that each story is true for that person.

This is my story, and it is true for me:

I arrived in San Antonio, my head full of wisdom, late Thursday afternoon and met up with the dudes. All of us were ravenous except first-class traveler Mark, who graciously detailed everything he had eaten on his flights.

For some reason we let Tim, fresh from summer eye surgery, drive Ginger (thanks for the name, Matt!) to Brackettville. He only nearly veered off the road two or three times. Dad spent the ride pointing out cactus plants and saying the name of every restaurant we passed: “There’s Jim Brill’s Barbeque.” “Mm, The Texas Ranch House.” “Look, Hermann Sons Steak House.” He was like this guy:

After about an hour and a half of that we ended up at an Applebee’s in Uvalde for dinner. No complaints from me; I’m as susceptible as the next guy to being comforted by American crap franchises with consistent branding when in an unknown place. The waiter asked us if we wanted our beers “dressed.” This means, at least in Uvalde, Texas, that they come with a lime and salted glass, margarita-style. I generally prefer a nude beer, but when in Applebee’s…. All that salt made the reheated frozen meals a little easier to ignore. But I have to say the red potatoes were just terrible.

My room at Fort Clark Springs was fine, better than I’d expected it would be — wainscoting and dark wood laminate floors cozied it up — but my comforter smelled like when you put a bathroom rug in the dryer and the rubber bottom breaks down into a kind of shredded submatter. It was a very unusual and unpleasant smell, probably the result of a combination of unclean things and acts, and it kept waking me up. At 4 a.m. I decided I wasn’t going to be able to fall asleep again, and so began Day 2. 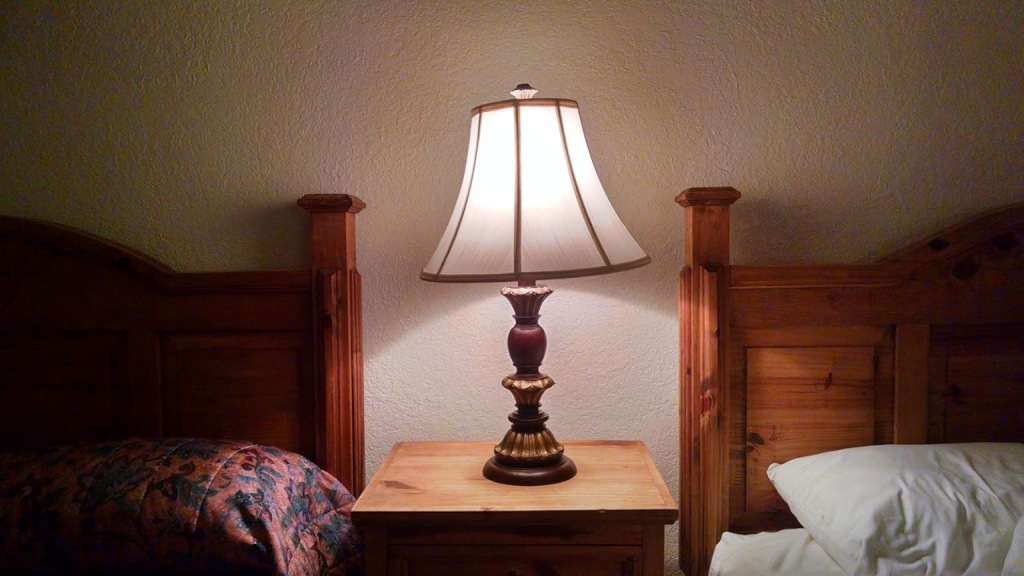 There was no breakfast plan. We met at the car at 7:30 and I gobbled down a granola bar and an apple while waiting for everybody (Brian) to be ready. 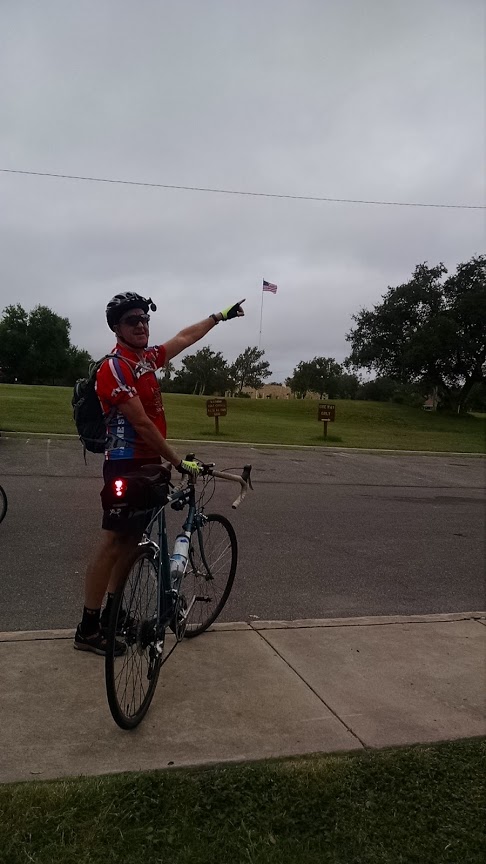 Tim points out what looks like a headwind. Turns out it was just a measly crosswind. 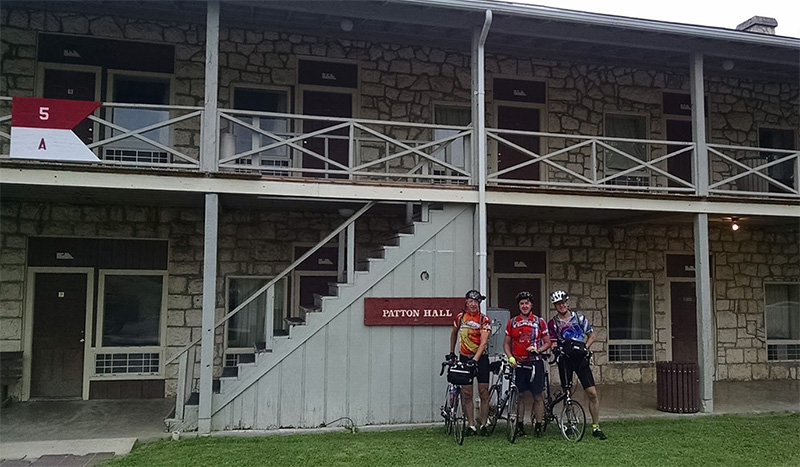 In front of the lodge, ready to roll.

The guys took off just after 8 and I worked in the room, monitoring their progress with my GPS app. Around 10:30 I realized that if I didn’t leave soon they were going to beat me to Uvalde, so I checked out, hopped in Ginger, and started the short drive. 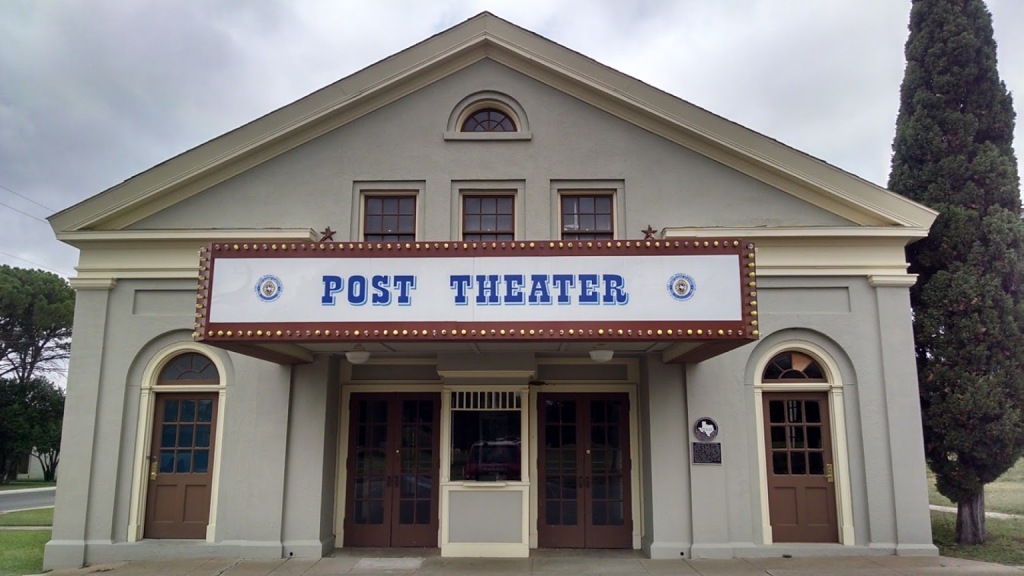 Theater on the way out of Fort Clark Springs

I passed them maybe six or seven miles out of town and honked, but apparently only Mark saw me. Then I felt bad for not stopping and spent the rest of the drive wondering if I should turn around and go back. Ultimately I didn’t, and they showed up about ten minutes after I’d gotten settled in the Holiday Inn Express.

The guys headed to the pool to cool off — while it wasn’t very hot, it was incredibly humid — and I walked over to the liquor store next door to pick up some six-packs. Then I rolled up my jeans and sat by the pool with them long enough to get some really dumb-looking sunburn. 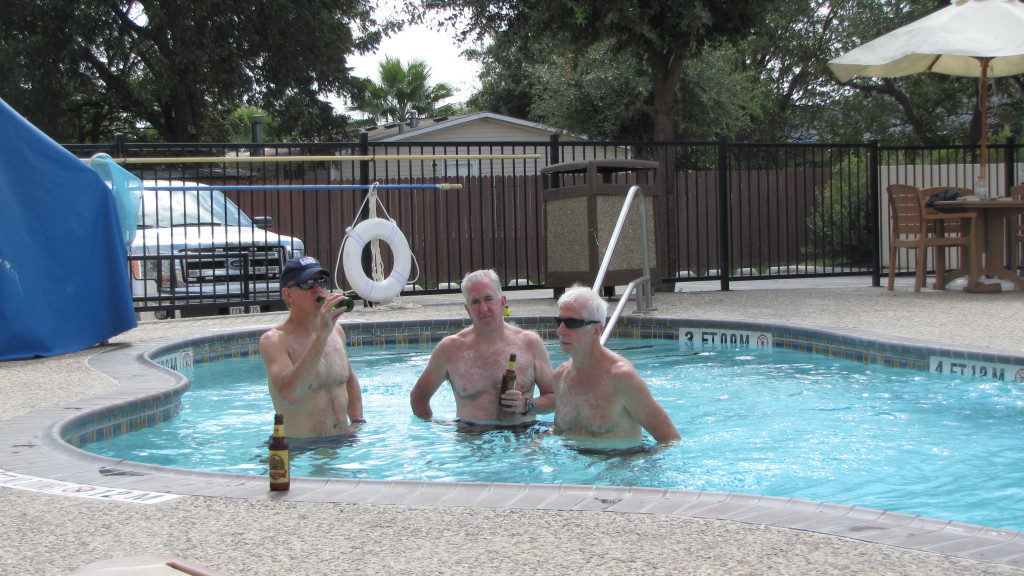 Brian is in the process of getting sunburned, too

After that, we hit up Whataburger for a tasty high-calorie lunch, then visited the John Nance Garner Museum. The museum is a model of good exhibit design, with carefully chosen artifacts and photographs telling the story of Garner and his wife Ettie, who served as his secretary while they were in Washington. It’s just the right size, and the signs use nice typography, and the space flows well. I’m sure it helped that Garner was an especially charismatic man, but I think a good museum could be made about almost anyone. (Fifth grade history book essay question: What would a museum about your life be like? Write 3-5 paragraphs on what might be included. Think about important events from your life and keepsakes that reveal your character.) 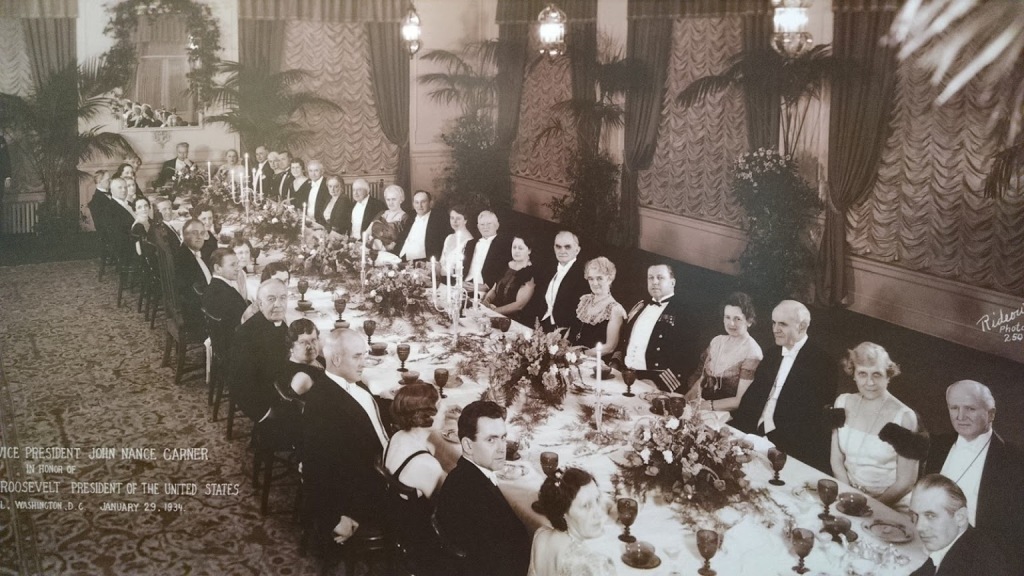 Our next stop was Walmart to restock supplies. 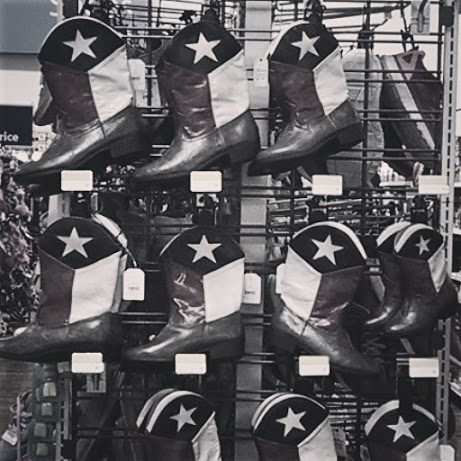 Chris and Antje, I picked up a pair of these for Matilda — that’s cool, right?

Our final stop of the day was Jack’s Steak House, on the recommendation of a border patrol agent. I ordered a salad and they gave me pasta, but it was pretty darn decent.

There was no art in the rooms at Fort Clark Springs, but there was a truly wonderful mural in the lodge office that made up for it. 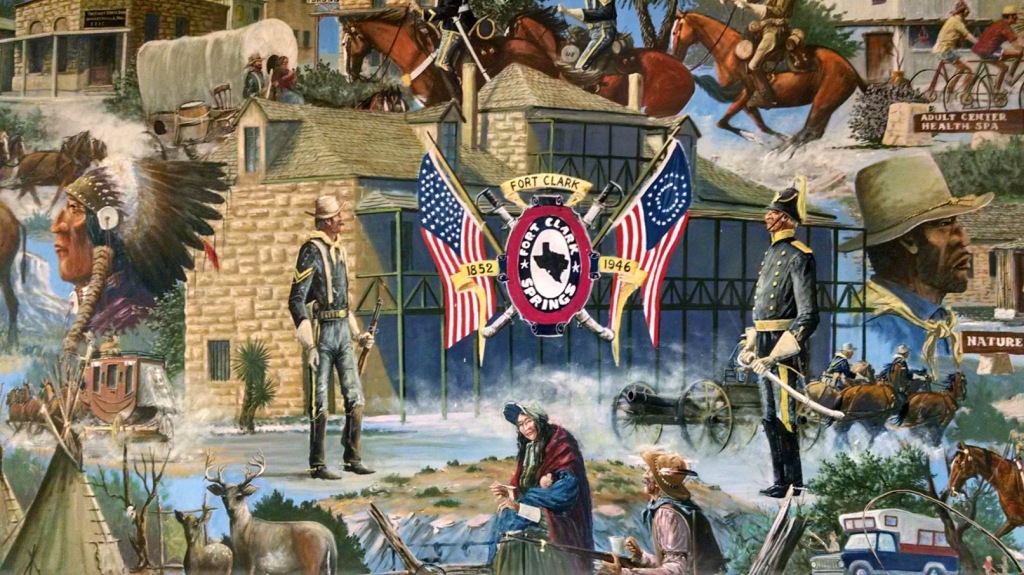 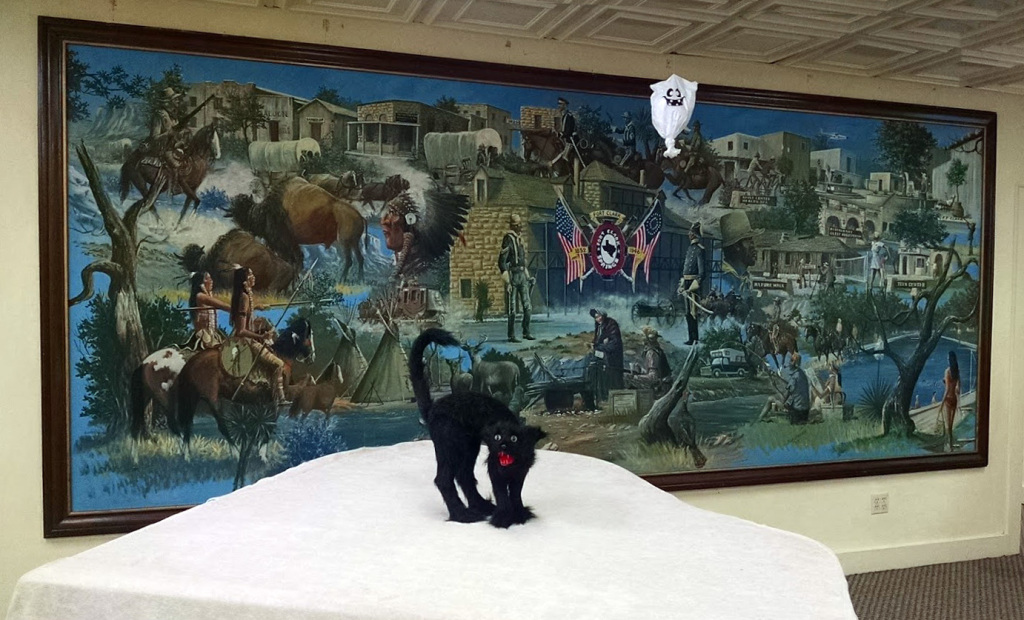 10/10. This has it all: hugeness, history, strife, competent collage execution, nature, perseverance, sex appeal, adult center health spa. And it is all unified by that nice bright blue hue that recalls textbook illustrations and globes of the 1960s and ’70s.