The trip is over, but I want to write about the rest of my L2 experience; I regret not having recorded the final days of my L1 adventure. This blog is for family and friends, but it’s also very much for me and for us. I will treasure being able to go back and relive these experiences.

Day 7: Kingston, NM to Las Cruces. I woke up in the early a.m. hours after my body sobered up, my throat parched from all of last night’s wine. My bed at Black Range Lodge was extremely comfortable, but I couldn’t relax back into sleep. I lay in bed thinking about work and life, finally going downstairs to turn on the coffee maker at 7.

Within a few minutes, Tom, staff cook and woodworker, freelance silversmith and gold digger, came in from outside and began making breakfast, chatting affably about life in Kingston. Mark and Tim filtered in, and we quickly downed a pot of very good locally farmed coffee. Black Range Lodge easily takes the prize for best coffee of the trip.

In continuation of my inadvertent weight gain plan, I enjoyed a hearty breakfast of French toast, eggs, turkey bacon, and fresh homemade bread. Then around 7:45 a glassy-eyed Brian zombied into the kitchen. Yet again he had not slept well. Today’s ride, while not mountainous, would be the longest, at almost 90 miles. I was seriously worried about his ability to make it, and so were his brothers. I kept making jokes that weren’t really jokes about how I could just drive him to Las Cruces. He insisted he was fine. He looked miserable. 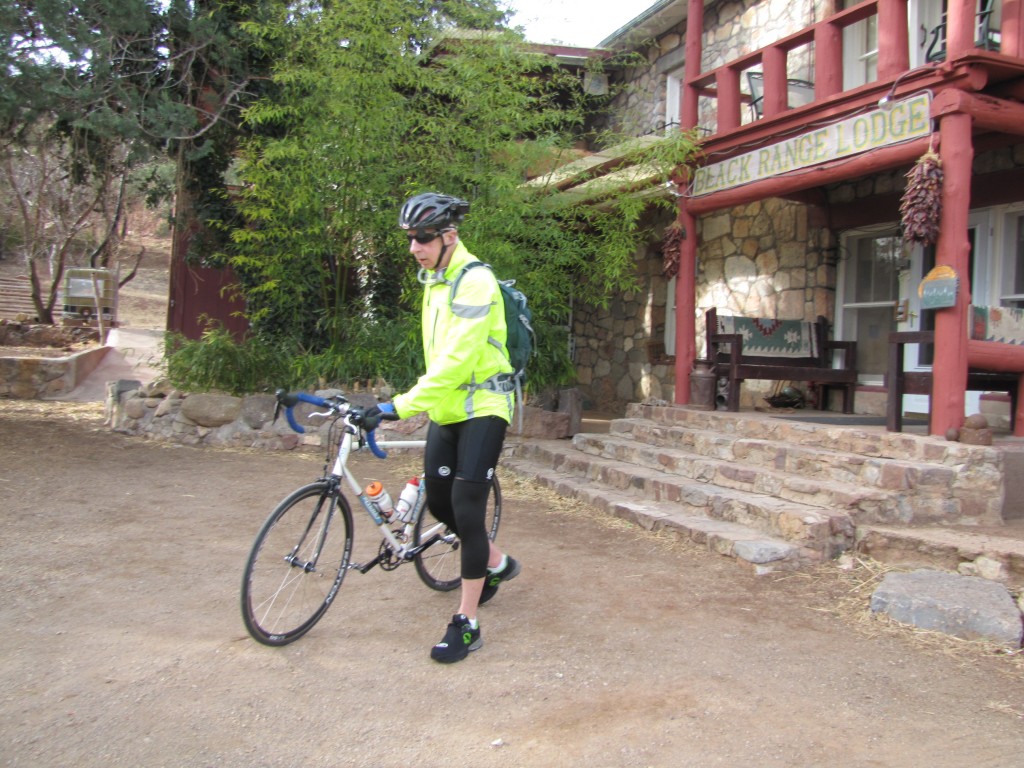 A very tired Brian heads out of Black Range Lodge 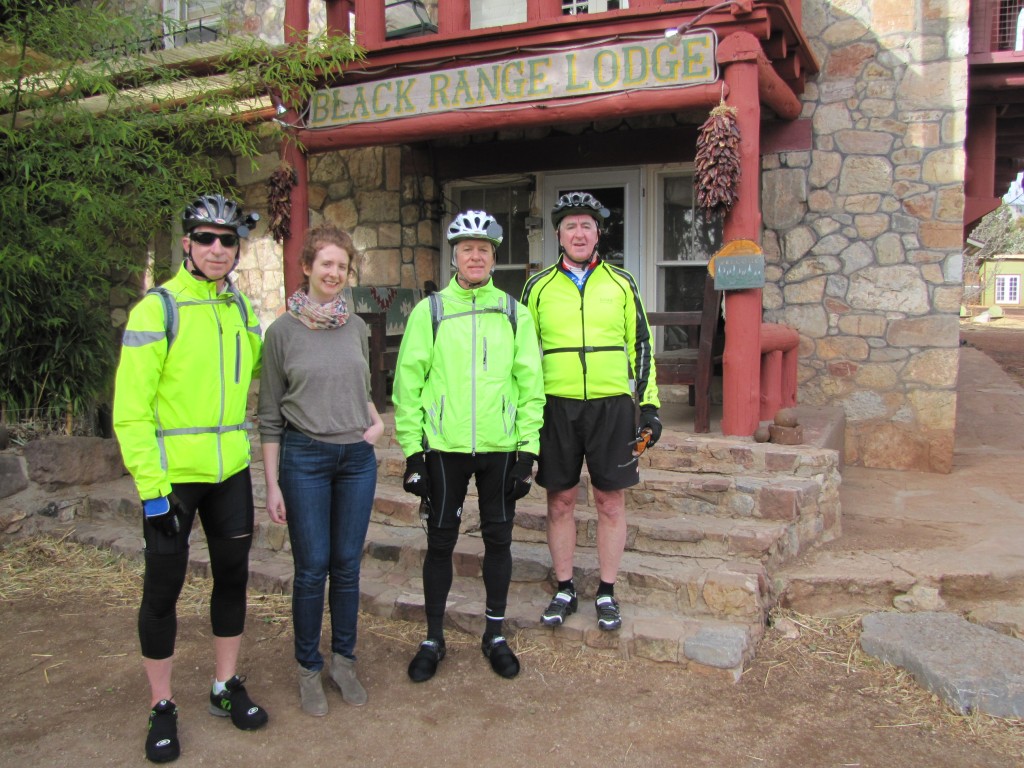 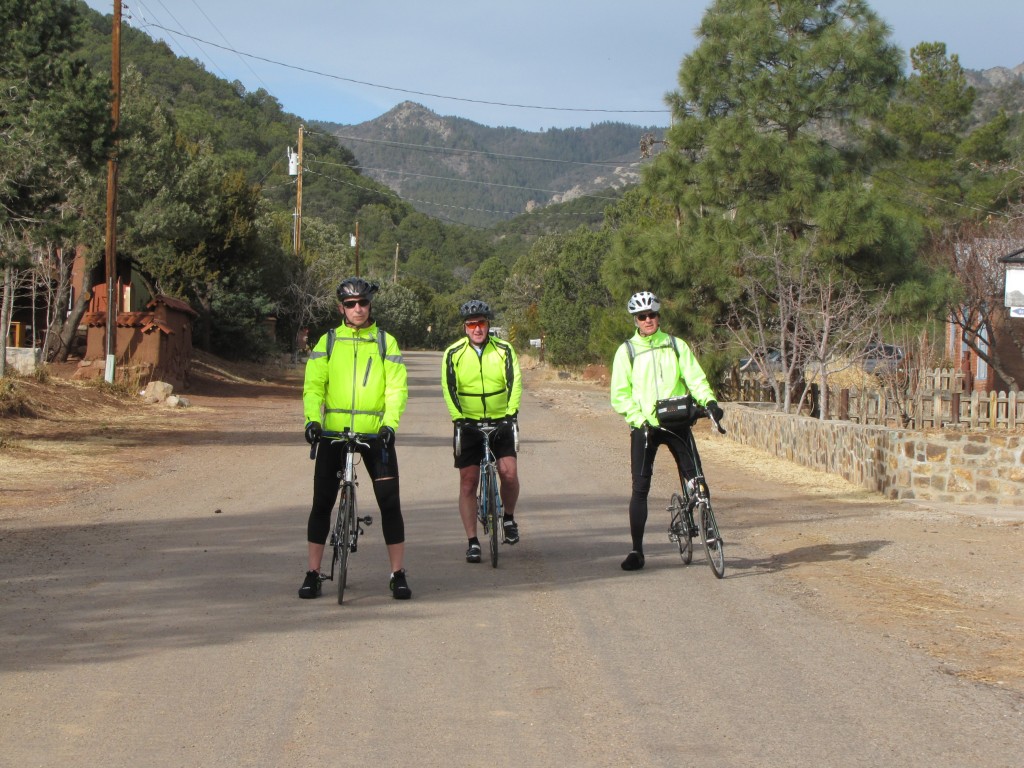 The guys, already bemoaning their late start, wanted to take off, but Catherine from Black Range Lodge needed to get the perfect “Leaving Kingston” shot. She tried to take a movie but my camera battery ran out.

After the bikers left, I did some work in my room and stressed out about Dad’s condition. If something happened to him, would it be my fault for not insisting he take the day off? I concluded that he’s a grown-up and it was his decision. His brothers would look after him and someone would call me if I needed to rescue him. Then I resumed stressing out.

I planned to meet them in Hatch, New Mexico, chile capital of the world, for lunch. I drove there on I-10 (speed limit 75, gulp) and didn’t pass them. I parked in a lot behind a gas station to worry more, making many fruitless attempts to track Dad’s location. I texted the team asking them where they were, but no one replied. After 20 minutes I started feeling antsy and self conscious, so I drove to a nearby Dollar General (there are many Dollar Generals in this part of the country) and parked Midnight Rider. For once feeling hungry (a rarity on this trip), or maybe just to take my mind off of not knowing when or whether I would ever see the guys again, I ate the small bag of Cool Ranch Doritos I’d been given by the cold check-in lady at the Holiday Inn Express in Silver City.

I’m not kidding when I say this: the happy childhood memories contained in the experience of eating Doritos were a magic balm; I instantly calmed down and finally started thinking clearly. Obviously the guys had taken a different route; they wouldn’t have gone on the interstate. I decided to head out to find them, and within minutes I passed Tim and Mark, who looked confused that I was going the opposite direction. About half a mile behind them I found Dad soldiering along.

I turned around, pulled up ahead of them, and told Mark and Tim to pick out a place for chile burgers. They asked if I’d seen my dad, which told me he’d been well behind them most of the day. I planned to try to convince him to give up again.

We ended up at Pepper Pot. Chili burgers were just what everyone needed (except Tim who was a wimp and got a regular burger) to power through the rest of the ride. I discovered that Dad’s phone had been on airplane mode, which explained why I couldn’t track him. I made my pitch for quitting, but he seemed much better after eating, so I gave it up and figured he’d be okay.

On the drive from Hatch to Las Cruces I even stopped to get out of the car and take some photos. 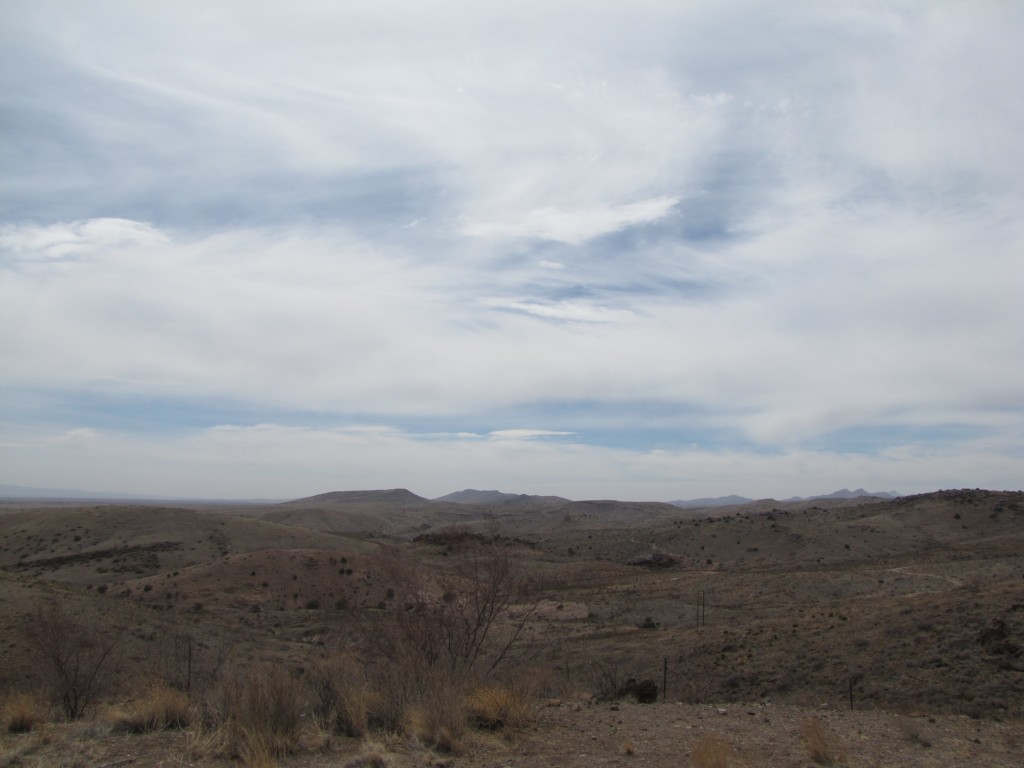 My cousin Mary arrived in Las Cruces about an hour after I checked in. I don’t get to see her often and it was really nice to catch up and spend time with her adorable kids. With the help of the tracking app I timed the guys’ arrival perfectly, and we all met them as they pulled up to the hotel. I gave Dad a hug. I was so happy his day of riding was over.

After relaxing for a bit we headed out to a nice dinner at La Posta, a huge restaurant in Mesilla that keeps a bunch of parrots in its lobby. This dinner is most notable for Tim discovering a beer he likes enough to drink regularly: Dos Equis.  He owes it all to Mark, who had been craving one (or more accurately, two) after the long day’s ride. 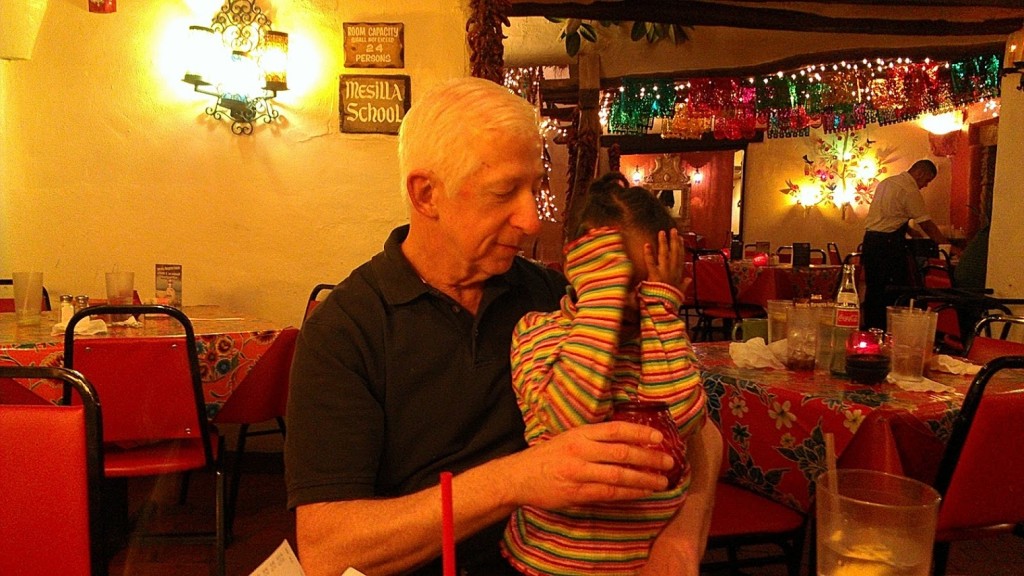 I forgot to take a photo of the art but found one on the Springhill Suites website. You will now appreciate the efforts I have made to cut out the glare of the glass in my shots. 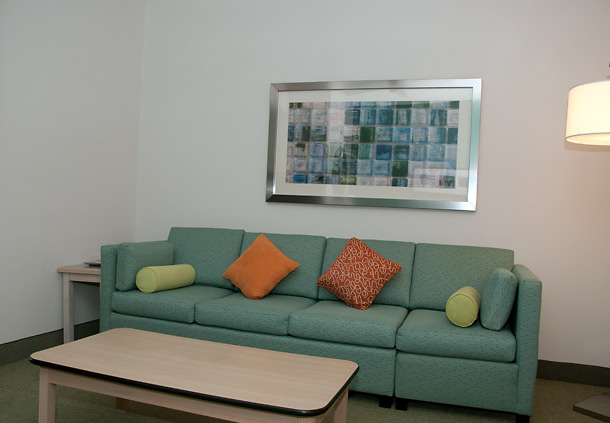 5/10. It’s very easy to ignore this piece, which looks like a a close-up of a nice kitchen backsplash. Yeah, it goes with the sofa. It’s got some texture. It’s completely inoffensive. Its blandness works against it, though. The colors are too cold and unvaried to make the room feel homey. But its failure is partly the fault of the overall interior design of these suites, which I would label “confused modern” or “what it looks like when a contestant on a design show doesn’t have enough time to finish.”

3/10. I like the idea of examining everyday objects like tiles closely — genuine beauty and wonder can be found in things like this. But I detect no heart, and not much thought, behind this piece. It had the potential to be something real but it just doesn’t care enough.