There is no better feeling for a bike rider doing a tour than finding your accommodations for the night after a long day’s ride. It feels even better when you stumble into the motel parking lot a few miles sooner than what you were calculating. Google maps and bike odometers are never synced precisely. Playing number games with the remaining mileage occupied my bored mind until the mile markers on the side of the road suddenly added a bunch of extra miles. After that I just couldn’t be sure exactly how many miles remained. The Adventure Cycling maps showed the town of Thatcher to be about 4 miles west of Safford. In fact, though, the two towns just run together so I didn’t even realize I was in Safford when Tim pulled into the Best Western Desert Inn parking lot. I thought he might have the wrong motel and that we would have to keep pedaling to get to the right one. What a great feeling when your room and a hot shower are minutes away.

Today’s ride actually lost elevation. Safford is maybe 500 feet below Globe. But the 76 miles were long ones for some reason. We had a slight headwind all day. Our waitress at breakfast this morning warned us about the wind around Safford and I guess she was right. We even saw a small dust storm. Brian was too slow processing my urging to take a quick video before we went around it. He had a very hard day today so we’ ll cut him some slack. He had a little case of Montezuma’s revenge from too many enchiladas last night. Or maybe it was that large strawberry margarita. He was feeling poorly all day. I gave him Motrin and Tylenol and he eventually got his second wind and felt better. Tim and I asked him during one of our many brief rest stops if he wanted to quit today so he could rest up and not get so weak that the rest of the trip was in jeopardy. But he said he could make and he did.

Another thing that a long distance bike rider loves is not being lost. Yesterday was one long ride on Rt. 60 East. No turns at all. Didn’t need any directions. That makes riding so much easier. (Rt. 60 East is the same road we took last year into Salome, Wickenburg and Phoenix.) Today’s ride started on Rt.60 until 1 mile east of Globe where it runs right into Rt.70 East. Nice and simple. (One of the worst days last year was the day we got lost climbing out of Pine Valley.)

Today we rode mostly through San Carlos Apache Indian Reservation. We were warned about loose dogs chasing bicyclists and sure enough, a pack saw us a gave chase. The leader was a terrier mix and he gave up much too quickly. I was ready with my water bottle and I had my voice commands to yell but I didn’t need either. Oh well, now we can say we were attacked but we sprinted away so fast they gave up.

No motorcycles today. Fewer cars and trucks but more than I expected for a Saturday. Unbelievable amount of road litter. You just can’t imagine how much trash is tossed on the side of the roads out here. Heard one rooster. Smelled some good wood smoke from outside fires. Talked to a young farmer and his wife and family. He was from California and moved here to start his own green house vegetable farm. Sells to Costco and WalMart. Loves it out here. 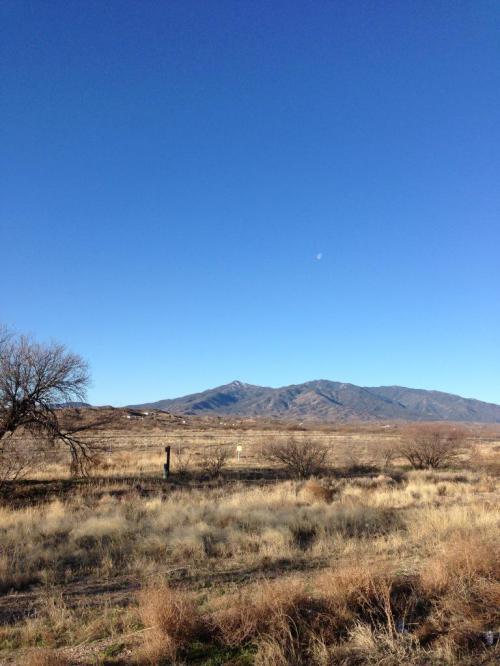 A beautiful day at our first rest stop 12 miles east of Globe. 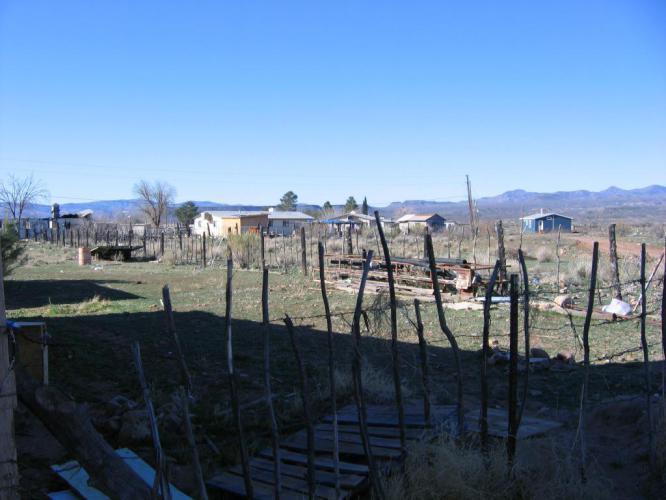 This is what San Carlos Reservation sometimes looks like. 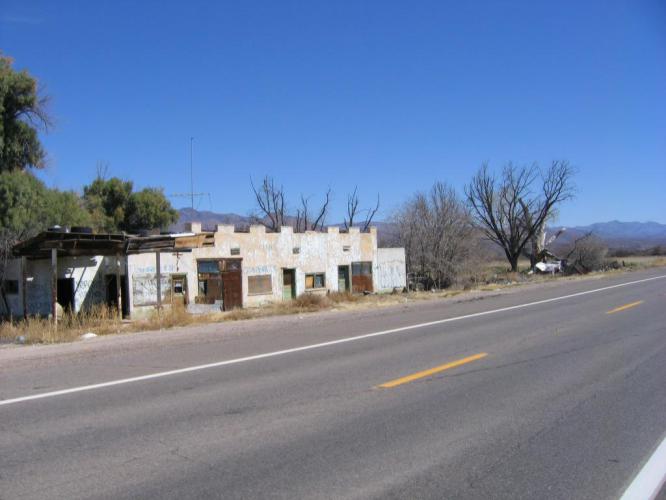 This is all that you can see of the town of Geronimo, AZ. It is at the eastern end of the reservation. 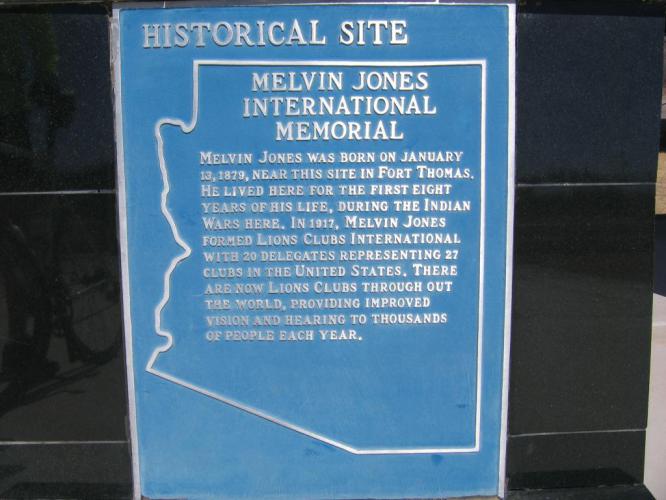 I posted a picture of a Historical Marker yesterday and felt bad that it wasn’t readable. This picture makes up for that. Enjoy. Imagine Tim reading it out loud for your listening pleasure. 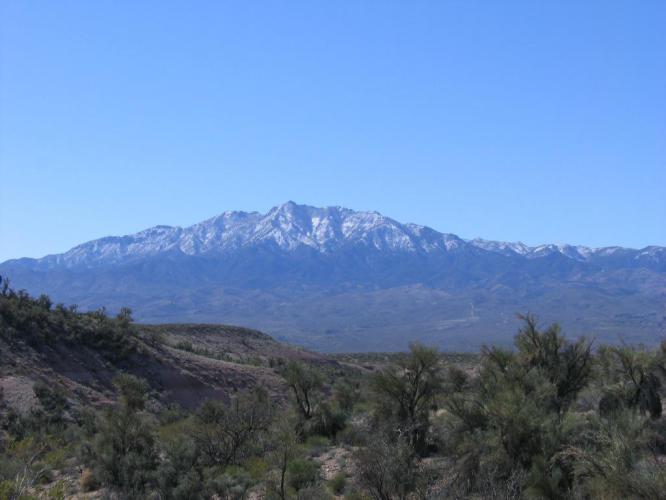 These snow capped mountains were visible all day. They helped keep my eyes away from the trash on the road side. 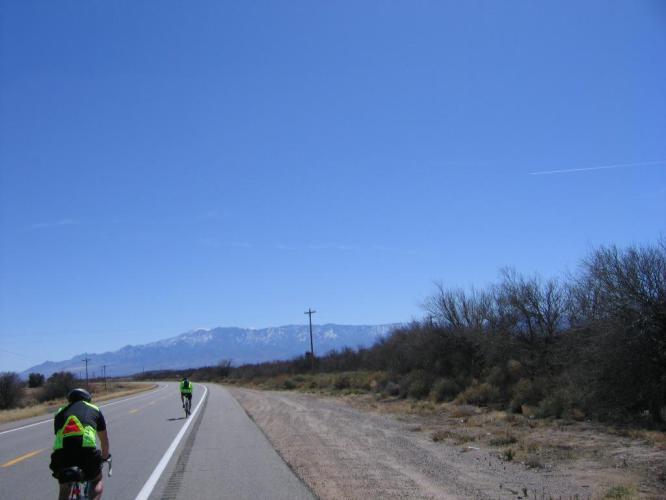 In the distance ahead is Mt. Graham. The Vatican owns an observatory on top. They are trying to use it to study the origin of the universe. Galileo would never believe it. 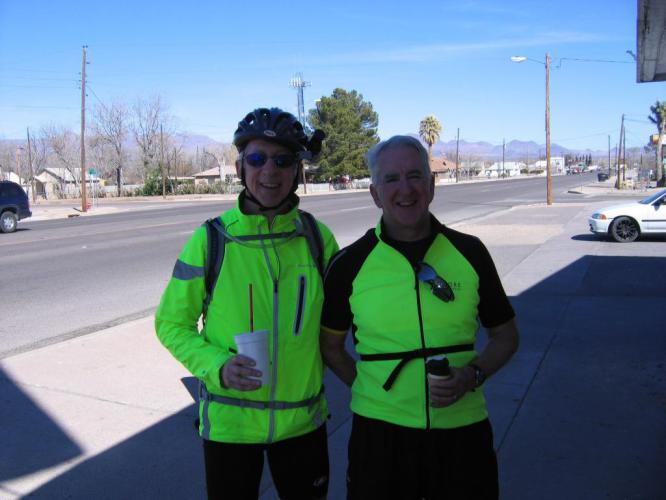 We saw the signs for Taylor Freeze every half mile for 5 or so miles. No way we could pass without stopping. It was great. The temperature here is 72. This is where we met the farmer and his family.