The riders have resolved to start their days earlier this year; it’ll give them more time for snacks, relaxation, and sleep. Besides, we’re all still on east coast time, anyway. On Day 2 we ate breakfast at 7 a.m.; they departed at 7:40. I hung out under the harsh fluorescent lights of my room till 10, then headed out to meet the guys for lunch in Superior before the scary tunnel ride. 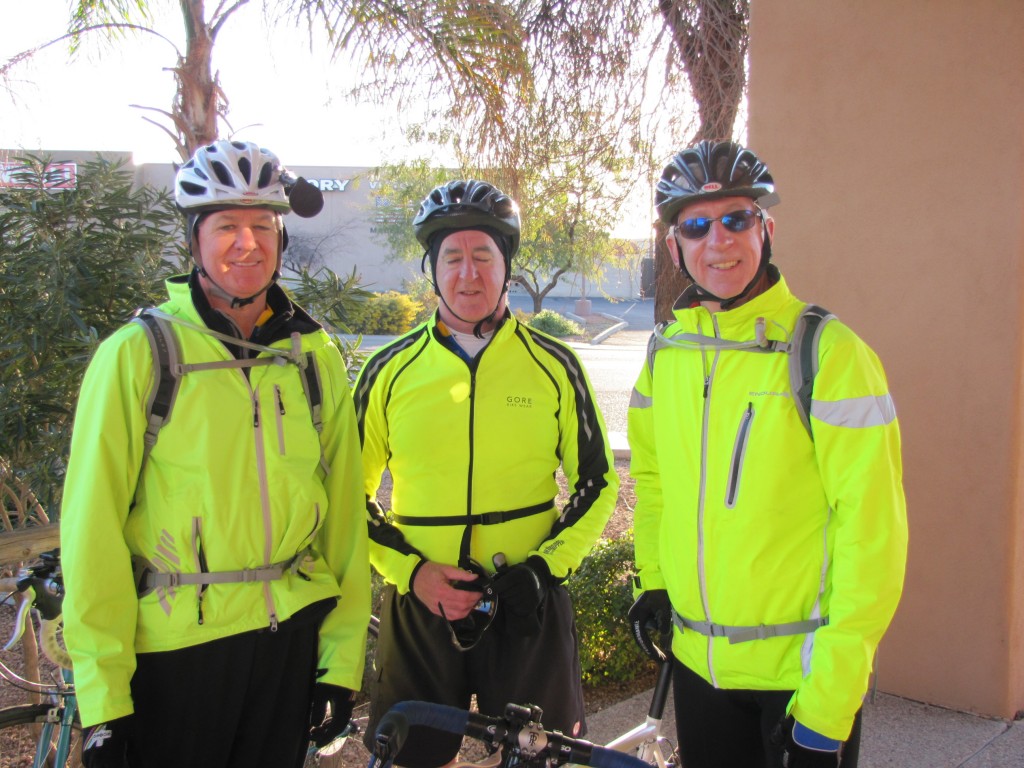 The drive was spectacular, with beautiful vegetation for miles. I wish I’d had time to stop and take it in better, but the guys were speedier than expected and ended up waiting for me for half an hour at a rest area. 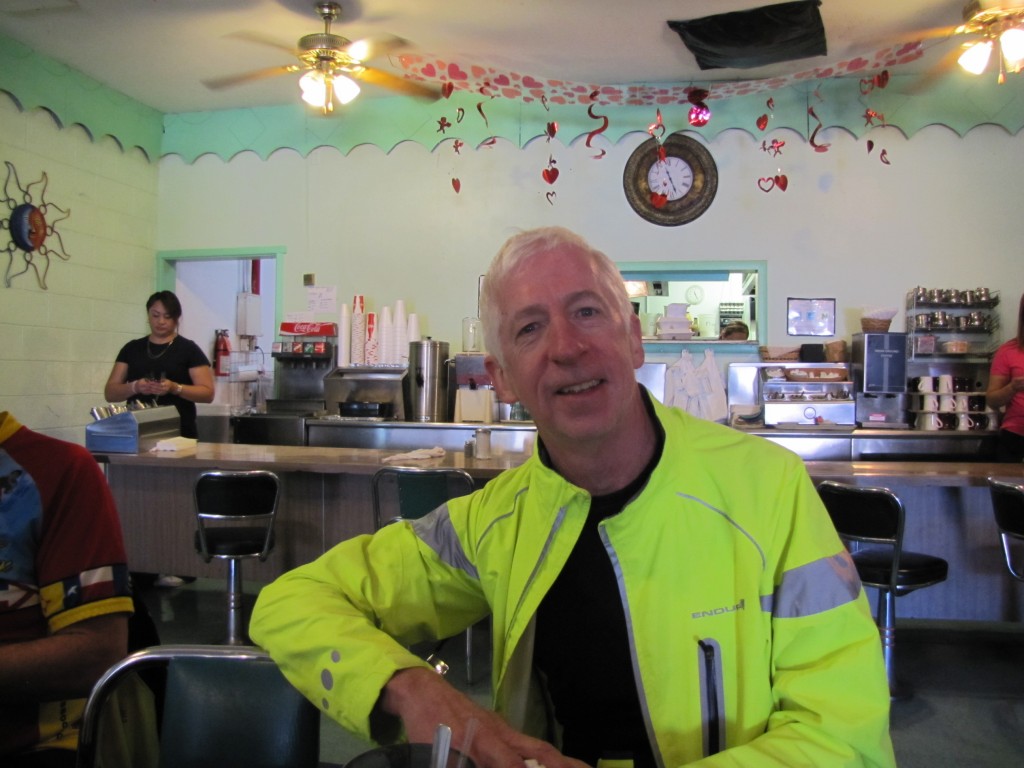 Lunch at a cute Mexican diner in Superior, AZ

After chicken tacos for me, a burger for Mark, and grilled cheese sandwiches probably fried in lard for the Lent observers, we went back to the car to put the video camera on Dad’s helmet. I gave them a head start to the tunnel, which was a few miles away, and headed to the rest stop’s ladies’ room for some “rest.”

This was the grossest restroom I’ve ever encountered. I’ve seen a lot of public bathrooms in my time (hundreds, surely), but things were happening here (or rather, had happened) that no one should ever have to face. I will spare you the details, but I am mystified by the aspect of human nature that inspires people to make a bad situation worse. I suppose it’s resentment at having been made to experience the bad situation in the first place. Anyway, ugh. 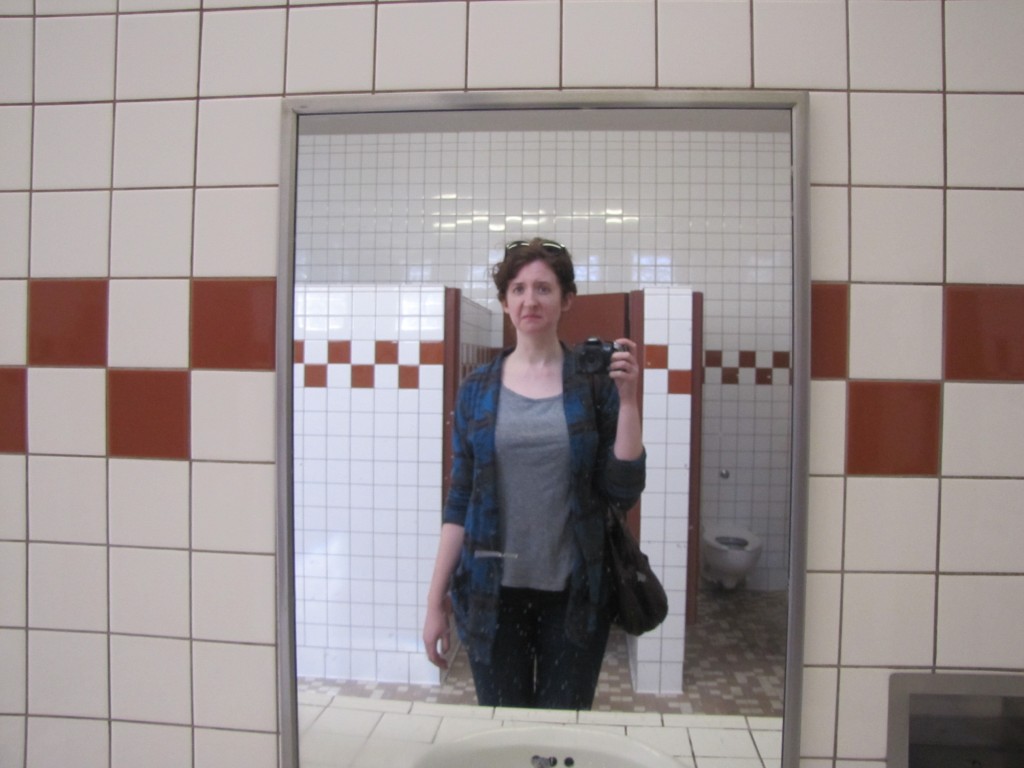 The bathroom looks clean, yes, but this unflattering self-portrait illustrates my disgust and hides the awfulness directly behind me

I shook it off, though, to focus on Project Get the Guys Through the Tunnel Safely. I passed them on the highway, then pulled off the road just before the tunnel entrance.

A few minutes later, the riders showed up in my rear view mirror. But gravel, Dad’s nemesis, felled him just as they reached the long pull-off. The guys were about a football field away from me, tiny yellow specks, and it seemed like the fall happened in slow motion, or like I was watching it on a screen — maybe because I saw it in the mirror. I was slow to react, eventually realizing I should get out of the car to see if they needed my help. I yelled, “Are you all right?” and it echoed off the mountain satisfyingly. Tim answered yes. Dad, though his knee was bleeding and his hip was/is probably bruised, soldiered on.

I’d like to pause here to say that if I’d been in Dad’s position, I would a) have felt light-headed just knowing my knee was bleeding; b) be terrified that I had to do something dangerous just after a painful, distracting fall; c) not go through with it, obviously; and d) not have done any of this in the first place, so this speculation is pointless. 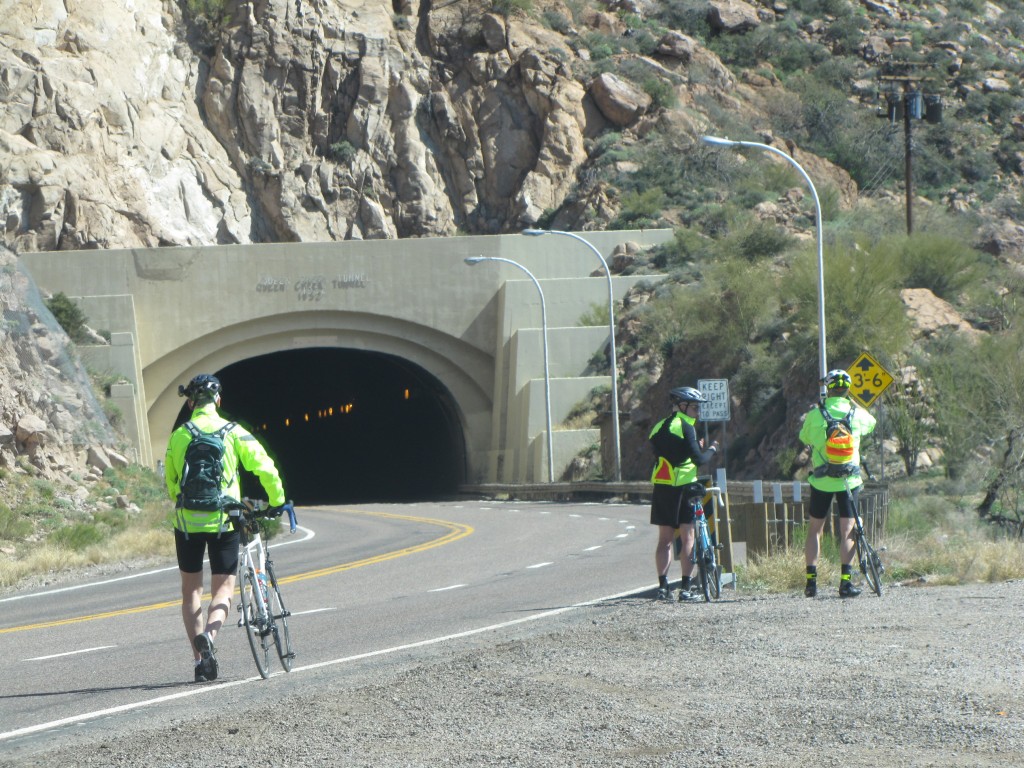 Dad walking off the fall

As the SAG driver, I’d been dreading this part of the trip, expecting angry cars to pile up behind me, unable to see that I was saving them from charges of unintentional manslaughter. I’d also had additional anxious thoughts about my anxiety causing me to do something rash, like speed up and/or swerve, causing a disastrous chain of events resulting in the death of us all. But the tunnel was short, and traffic was pretty light, and for the most part other drivers were cool. As Tim mentioned, only one person honked angrily, but he gave an “I take it back” honk once he saw what was going on. Thanks, dude.

After we made it through, I realized I’d been holding my breath. Everyone was okay, so I headed off to the Quality Inn in Globe.

Though my room smelled vaguely of farts, it was otherwise very nice. I settled in. The guys arrived two hours earlier than expected, around 2:30. We took our daily bread (beer, chips, crackers — oh, plus delicious artisanal chocolate courtesy Holly [thank you!!]) in Dad’s room and listened to Tim read another chapter of Conquering the Borderlands.

We chased down the snacks with an early Mexican dinner, probably the most authentic Mexican food (as well as the best restaurant sign) we’ve experienced in both legs so far. Dad already wrote about this, but here it is again: 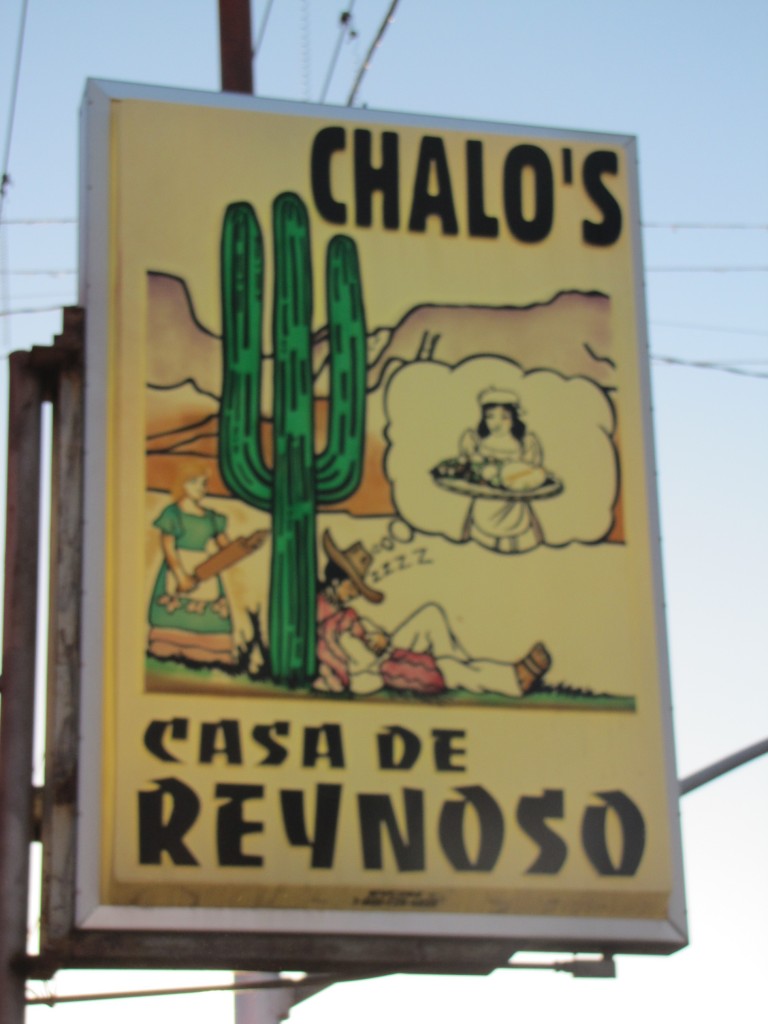 The man is dreaming of a beautiful lady bringing him food, and his wife is about to hit him with a rolling pin

Then we went back to Safeway for supplies, and I’m only mentioning this because there was an amusement park in the parking lot: 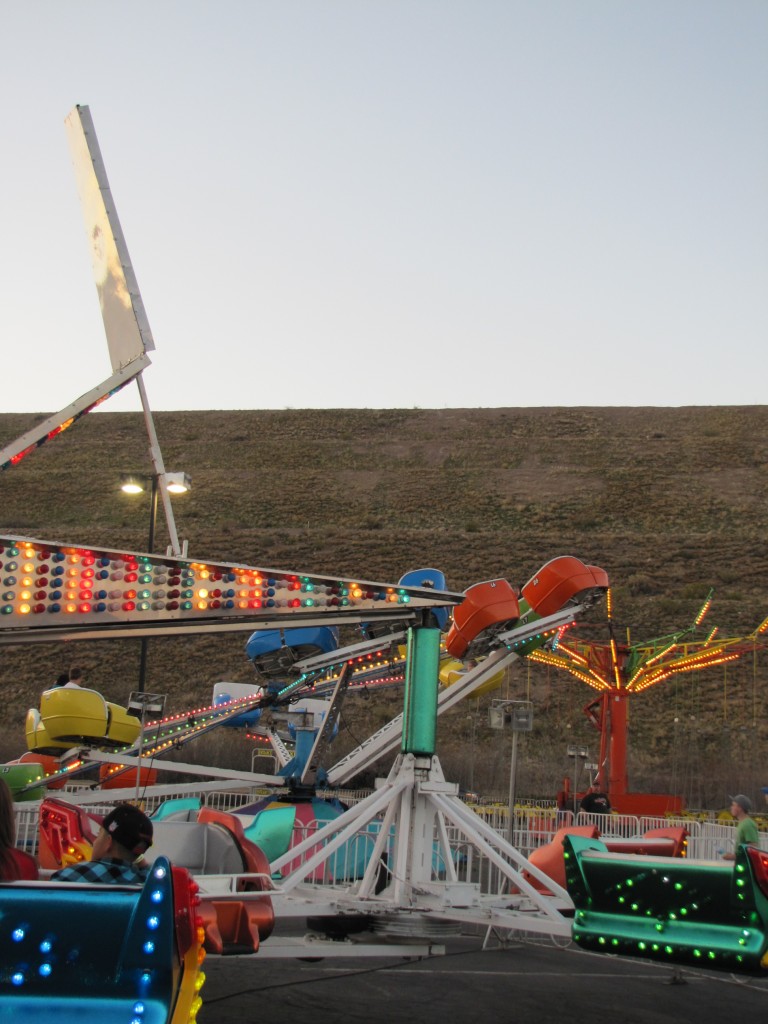 Rides in this setting were otherworldly, both ugly and beautiful

And that’s that for Day 2. But it’s time to introduce a new daily feature! Last year had salsa. This year has ART.

Hotel Artwork of the Day

Contemporary hospitality interior design theory seems to believe that paintings should not invite contemplation; that they should instead underscore the room’s sense of comfort, relaxation, and luxury by blending in with the decor. In other words (because I know Dad is lost after the last sentence), most hotel rooms don’t want you to really look at their art, at least not more than you look at the bedspread. If you’re going to think about the artwork at all, they want you to think, “Oh, that’s a nice painting,” and nothing more.

But maybe there’s nothing wrong with that! While I generally think art should be more than a bit player in an interior design concept, it kind of makes sense in hotels. Being forced by the wall to think about something on it is not necessarily what the average weary traveler wants.

Uh oh, I could go on about this for paragraphs. Don’t worry, I won’t.

Let’s take a look at our first specimen: 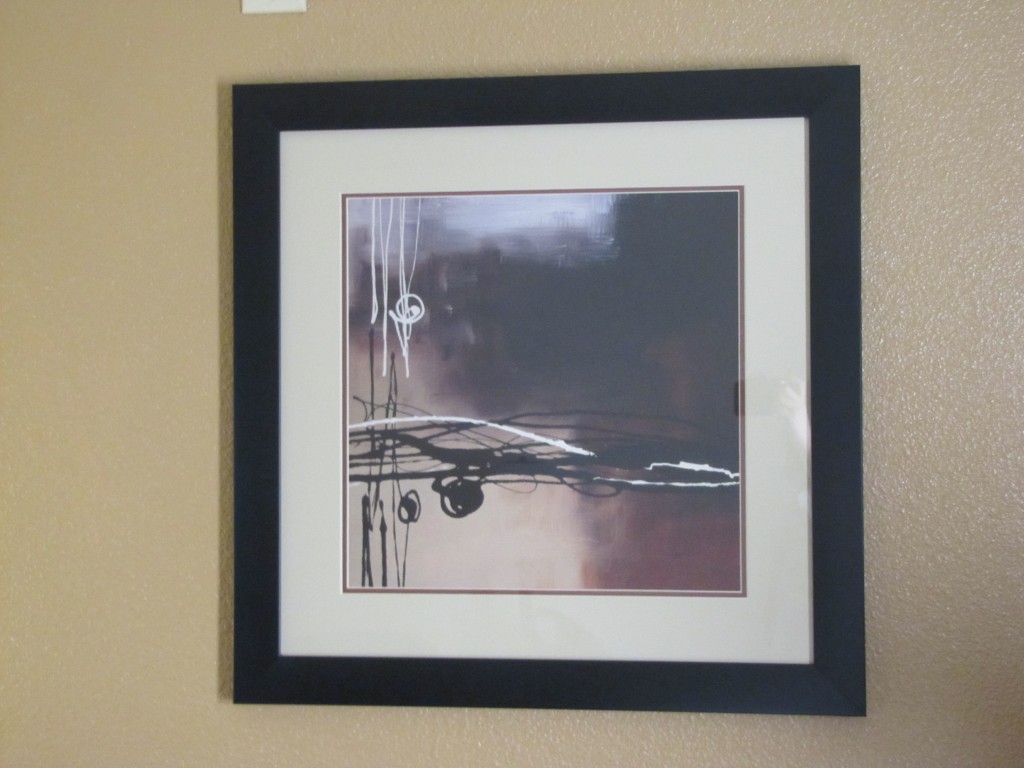 To me this feels like art at its most cynical. There is no discernible soul; it is actually noticeable for not being nice. Also it is boring. It’s hard for me to believe that the artist had any idea in mind other than to make money by churning out some hotel room art. Perhaps the scribbles suggest frustration at only being able to earn a living through crappy stuff like this. The background is painterly, at least. Still.

Hotel Art Score: 4/10
It basically blended in with the decor, but the angry lines work against my sense of relaxation. If they’re supposed to be whimsical they’re failing me. Also the square size was awkward for this particular room. Subpar all around.