I didn’t get the best sleep at the Best Western in Madison. I woke up early and cranky, annoyed at those @*$%! fat pillows and at having to use a 20-year-old bathroom with its ugly brown speckled sink and ugly old shower. Woe was me.

I went down to breakfast ahead of our scheduled meetup time and found Mark, Tim, and Matt already halfway through their meals. The Sullivans reverse the standard party arrival etiquette; it’s cooler to be at least 15 minutes early.

“Is your dad okay?” Matt asked me.

“Well, it’s still not even seven yet,” I said. Technically none of us was supposed to be here.

The night before, Chris Christie had stood awkwardly behind Donald Trump at a press conference, and Fox News — it still semi-astounds me that any establishment would make Fox News its default TV channel — was playing clips of the conference.

Dad arrived just as the others were finishing up. He expressed disappointment and surprise in Christie’s support of Trump and in the early birdism of his brothers. 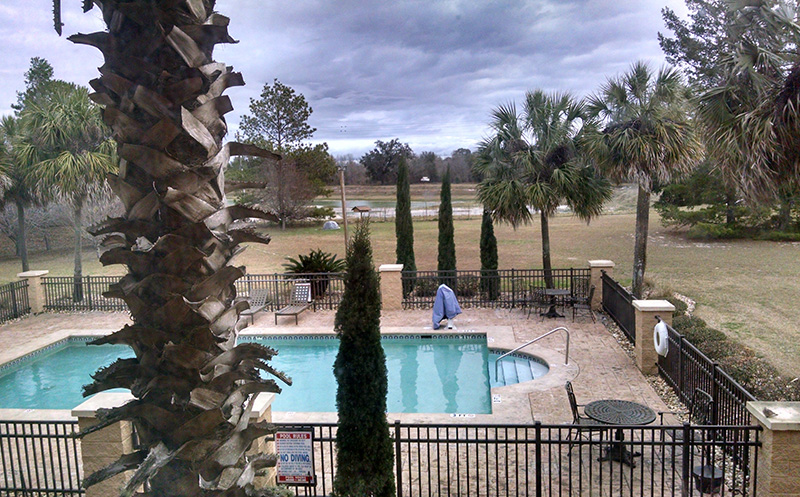 The view outside my window was way better than my room; note swamp in the background

When everyone was in the parking lot prepping to head out, I received a sign from the universe that it would be a good day. 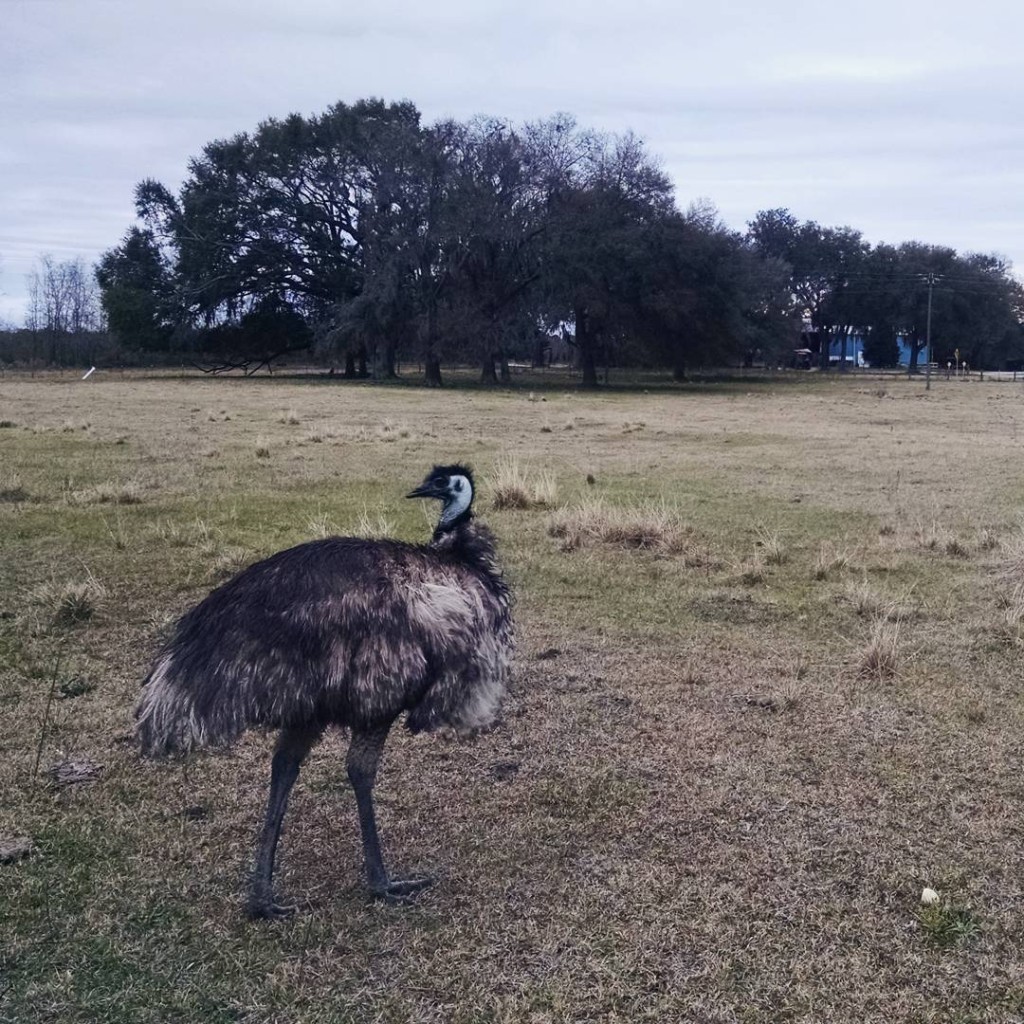 This big birdlike creature was hanging out by itself in a not particularly clean field next to the hotel. What a strange thing to see! I didn’t even know what it was at first (I’m terrible at identifying plants and animals) and guessed it was an ostrich. Matt jokingly proposed that it was an emu, and Wikipedia confirmed that he was right.

How could any day with an emu sighting turn out to be bad? Famous last words, I know, but I just had a feeling about this. 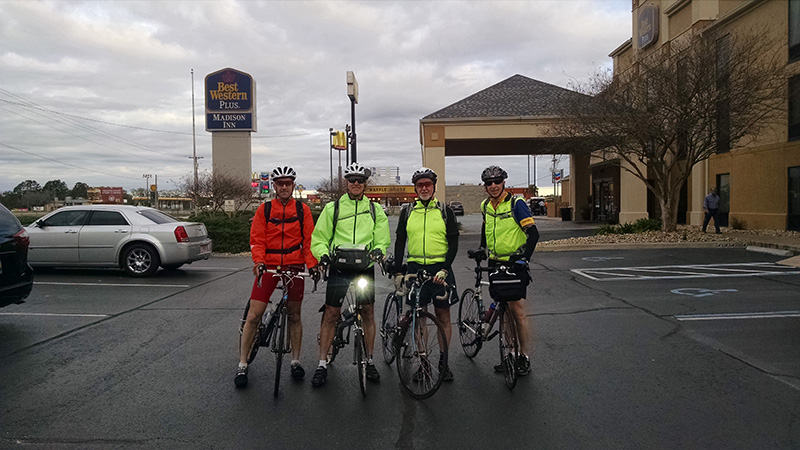 Despite the gloomy sky their future is bright 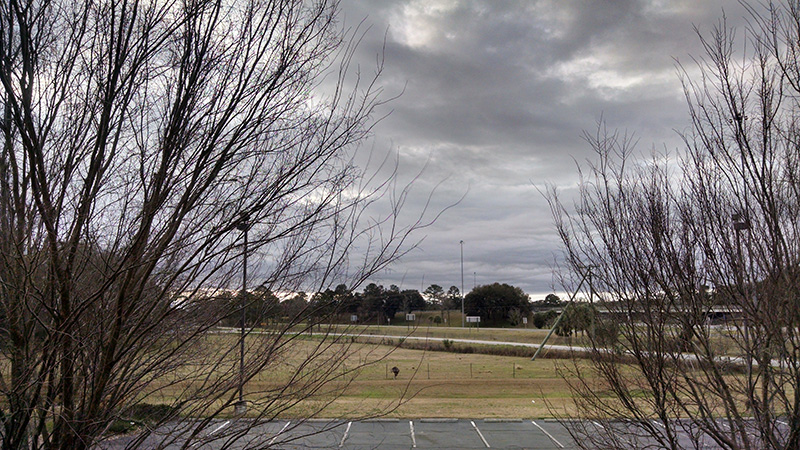 After the bikers departed I extended my hotel checkout time and partook in a conference call. Everything went smoothly because I was now operating on emu power. Here’s a secret thing about me: when I see a bunny rabbit out in the world, I think of it as equivalent to getting a power-up heart in a video game. It’s called bunnergy. I take energy away from the bunny when I see it, but not enough to deplete the bunny in any significant way. The emu equivalent of bunnergy was like a 10x power-up.

On the drive, which also went smoothly, I relistened to a chapter from The Acceptance World because of some technical difficulties, but it turned out to be fortuitous, because it was the chapter in which the concept of the acceptance world was explained, and I hadn’t really understood it the first time. You don’t care what it is now but I think many of you (is anyone still reading?) would enjoy this novel. 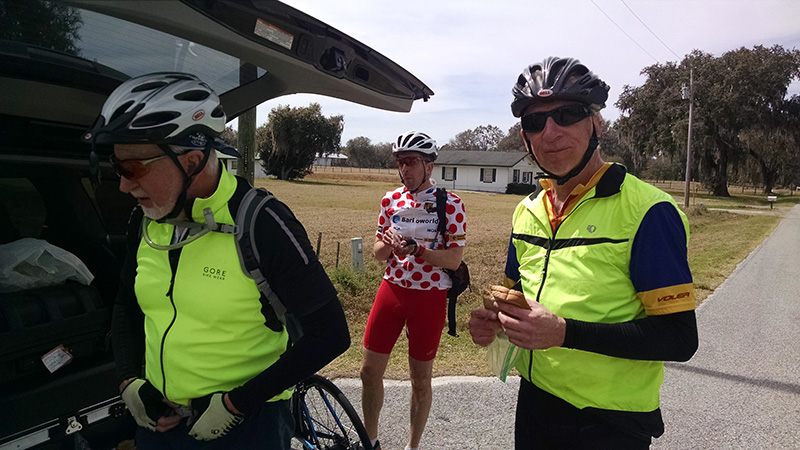 I met up with the guys around lunchtime. Just behind Onyx in this picture are some horse stables, and both Tim and Brian noticed them at different times and asked whether they used to be a motel.

Speaking of horse lodging, were going to be staying in a B&B that night, and it had a check-in time of 4 p.m. B&Bs, I’ve learned, are fairly inflexible about check-in times. The guys were going to arrive around two o’clock, so during our pit stop I decided to call the owner and see if we could check in early. I told her we really only needed one room by then so that the guys could shower. She seemed like a high strung sort of person and told me they couldn’t all shower in the same room. I said, “Well, not at the same time, obviously!” I’m not sure what her reservation was — maybe she didn’t want to mix up the towels? Too much water usage from one room? Anyway, she thought that four rooms would be ready by then, and that sounded fine. 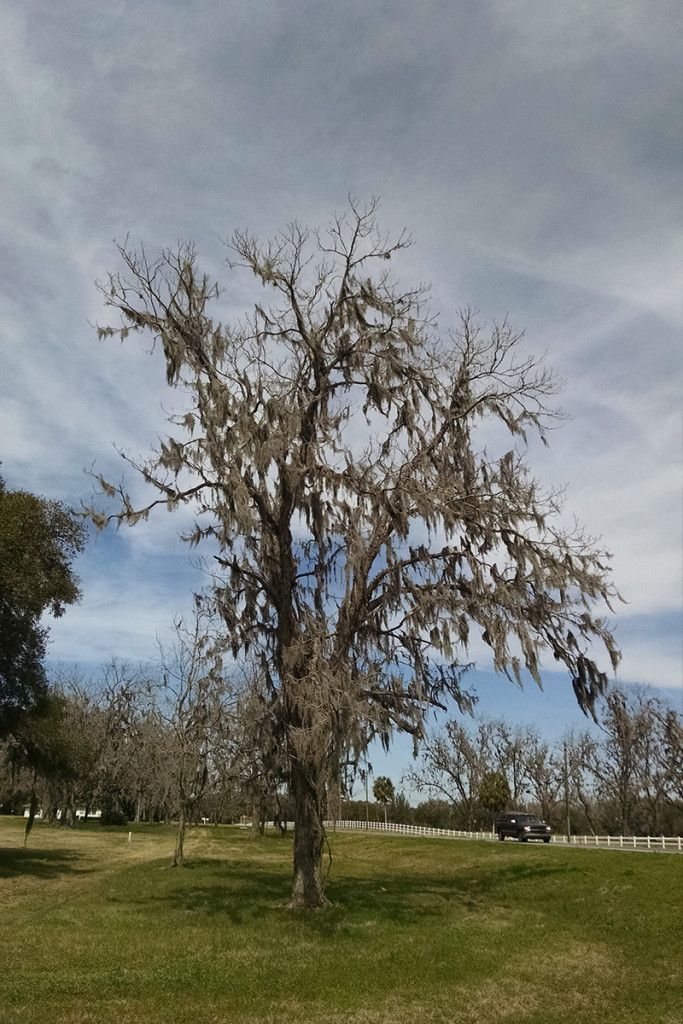 I had to kill about 45 minutes when I got to High Springs. Fortunately High Springs is very quaint and walkable. The town’s population is about 5,500, but it draws visitors who like to scuba dive, canoe, swim, and fish in the nearby Santa Fe and Itchetucknee Rivers. It was about 75 degrees that day, and I would have been happy to canoe down a river, but I was just as happy to wander around the town. 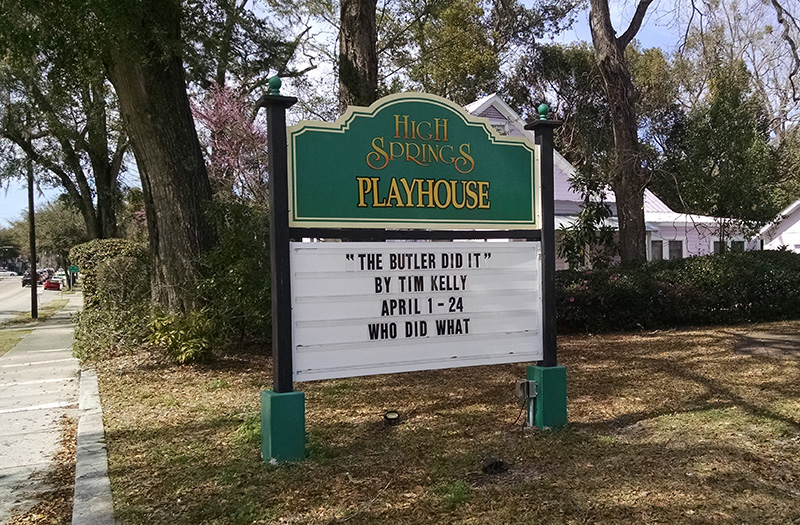 SERIOUSLY, WHO DID WHAT 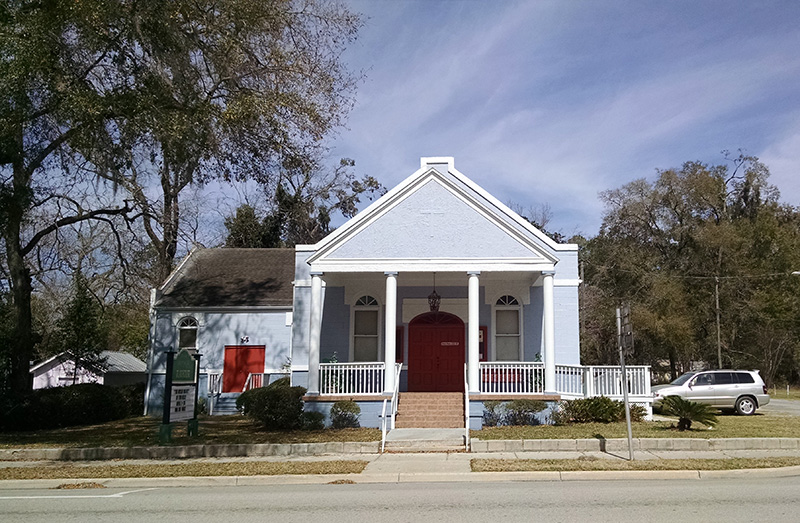 I dipped into one of the many antique shops that line the main street and took my time looking at stuff, eventually finding an old card game called Flinch for $2. It was created in 1905 and is still being produced, though I’d never heard of it. My version is from 1951 and has great type. 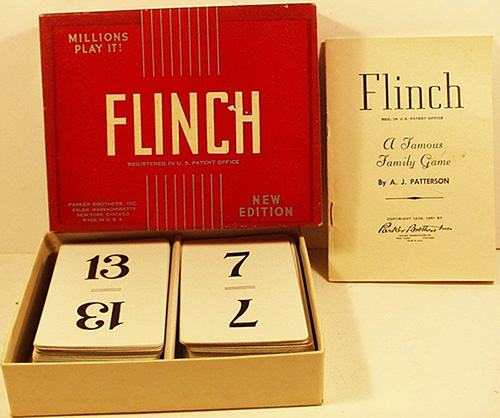 The B&B was on what passed for a busy street in High Springs, and I initially passed it and kept driving to see how far the historic district went. Not far. I looped back, pulling up at two o’clock on the dot. I was met by the husband of the woman from my phone call, an amiably smug fellow who predicted that by the time the guys arrived I’d be sitting on the front porch enjoying a gin and tonic. This sounded very appealing, but it was not to be. Midway through the house tour — soon after I met the woman and witnessed a tense exchange between husband and wife about where to store the bikes, after which she disappeared to her office and he put his arm around my waist and told me conspiratorially never to get married — the gang appeared. They sweatily but patiently listened to the entertaining but long-winded house rules, their need for beer growing more palpable by the minute.

Everyone’s bike had had some kind of problem that day, so our post-ride snack session turned into bike tune-up time. I cheerfully ate tortilla chips and fetched beers as needed. 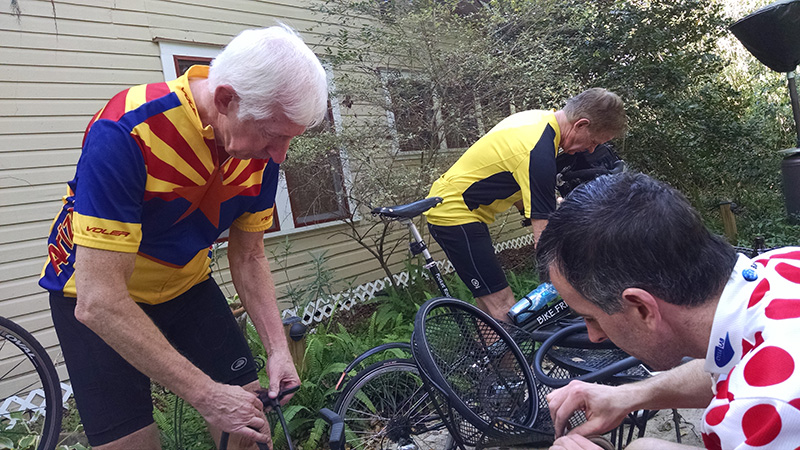 Working on bikes in the backyard

We walked into town to get some bike parts, then settled into our rooms until dinnertime. 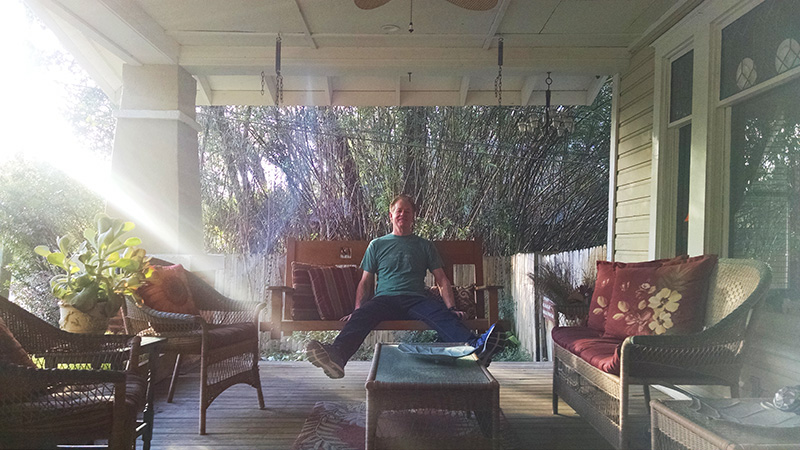 Dinner was at the just-right Great Outdoors Restaurant, which by five o’clock was already filling up. The atmosphere was great, the food was plenty good, and we all felt so glad to be outside on a warm night. A couple guys played country, Mark’s and my favorite style of music. Honestly, that was pretty good, too. Thanks, emu. 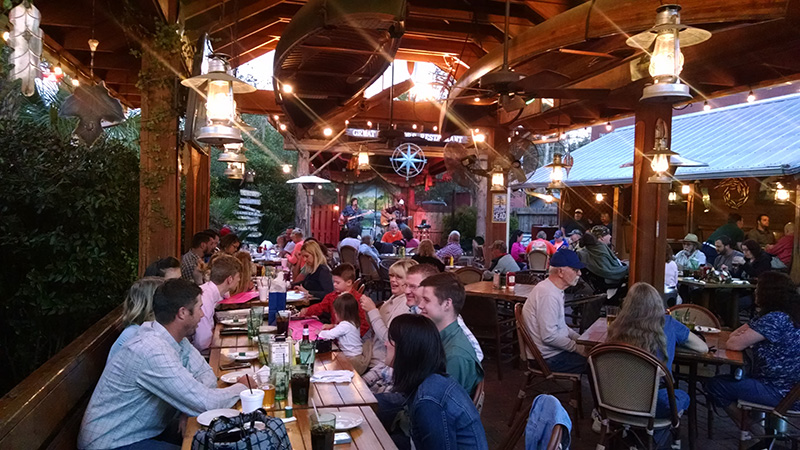 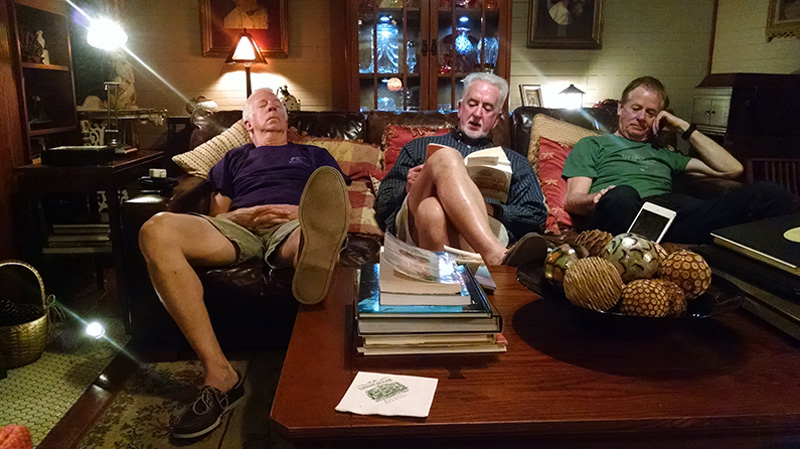 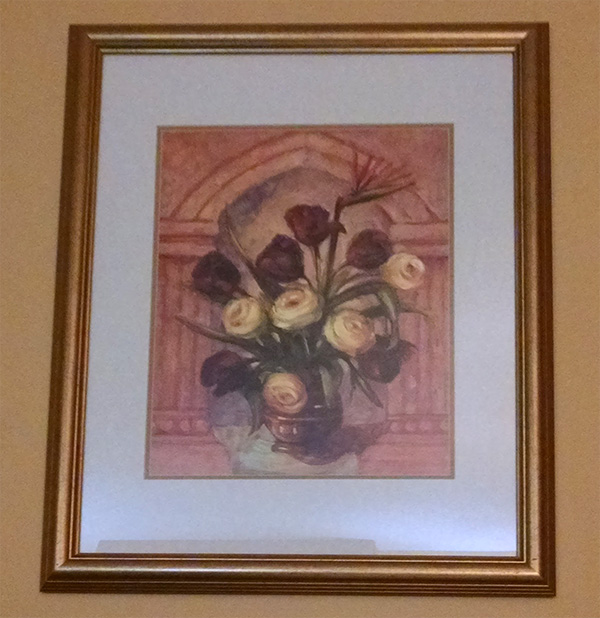 7/10. The picture isn’t great so you can’t see the technique too well, but it’s got a nice illustrated style, and the background feels like an imagined mental space. The painting feels like a still from an arty animation. I like it.