The Blanco Best Western is an unusual property. Its reviews on TripAdvisor are remarkably positive — a 4.9 rating and comments like “best Best Western ever!” and “Greatest hotel!” — so I was excited to stay there. It certainly had the most expensive and ornate loveseats of any Best Western I’ve known. 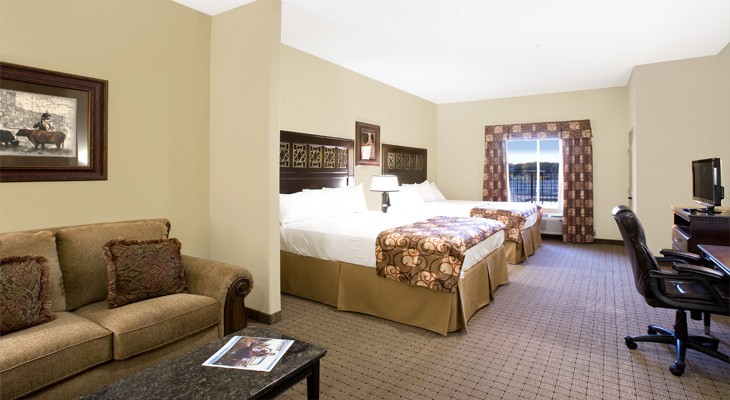 The loveseat: a solid piece of furniture

And it had a robust collection of Southwestern art in the elevator, halls, and rooms. Some of the paintings in the first-floor hallway had rotating colored LEDs shining on them, adding a gratuitous but appreciated oomph (sadly not captured on camera). 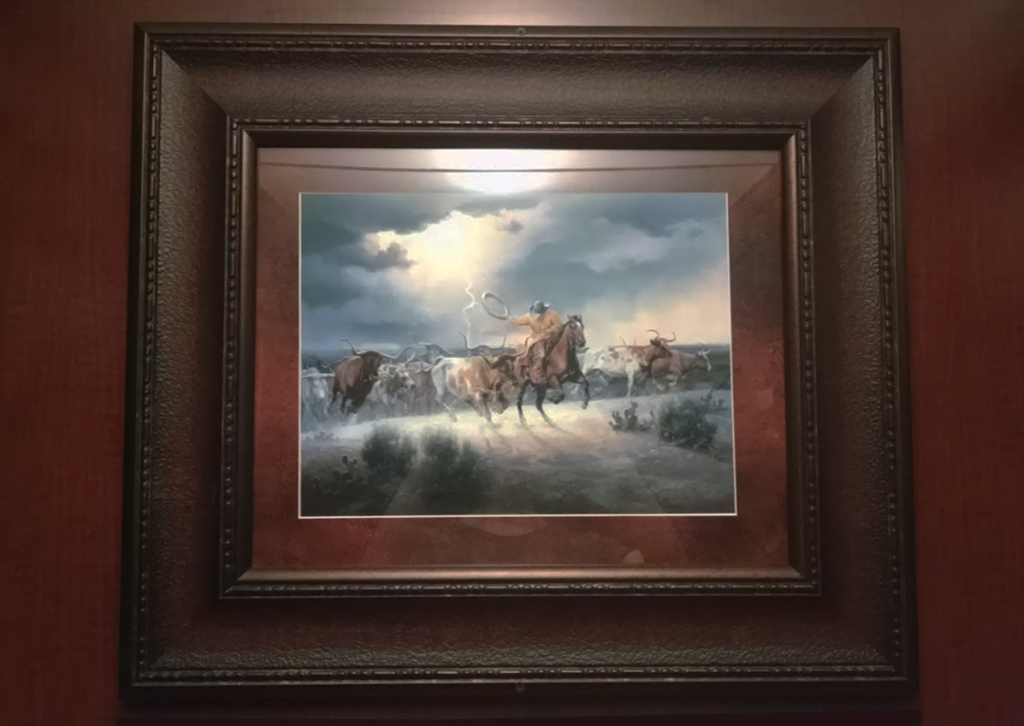 Herding in a thunderstorm 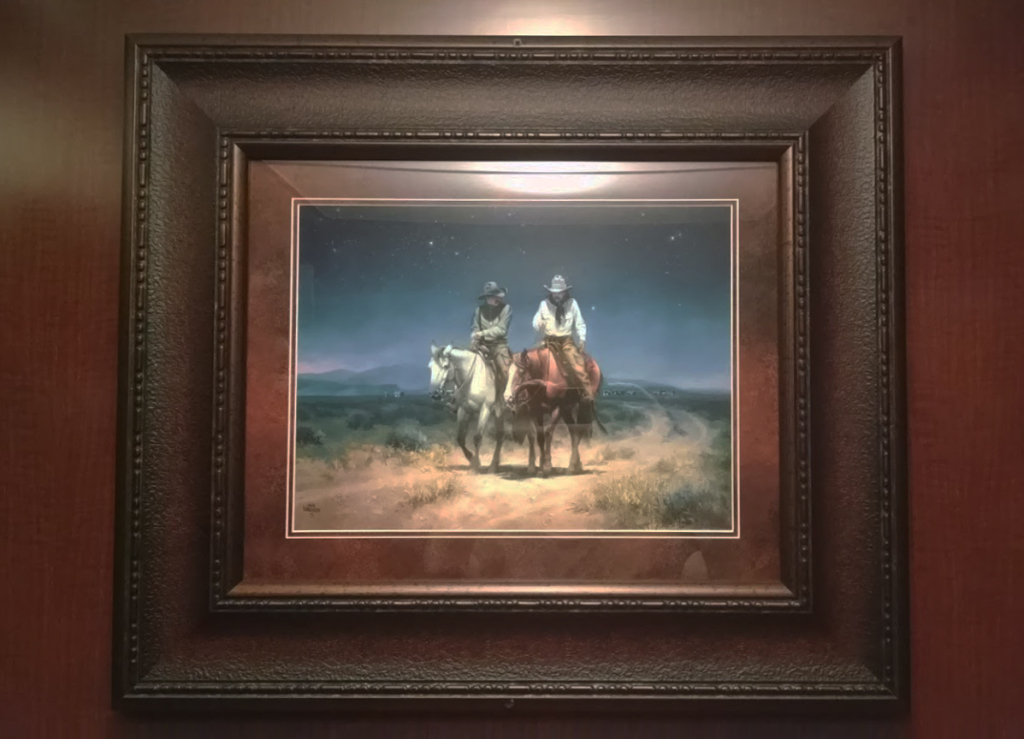 And there were two TVs in my room, one facing the bed and another in the office area. And it had a nice garden outside.

It wasn’t the best Best Western ever, though, because breakfast was horrible: half-frozen tater tots, instant scrambled eggs (which weren’t replenished when they ran out, maybe to the benefit of future guests), and even worse, instant coffee. How is instant coffee still a thing? Isn’t making coffee one of the simplest tasks man can attempt? The internet likes to tell you you’re doing everything wrong, but as far as I can tell it hasn’t tried to tell you that you’re making coffee wrong, because you aren’t. You’re just making coffee and it’s coming out fine. You are, however, drinking it wrong. See below. This video is an annoying Buzzfeed production but it actually has some good tips. I recognize that posting it makes me complicit in the propagation of our detestable internet culture and I am sorry:

Here, watch this to cleanse your palate. You’ll never look at a Twinkie the same way again:

In conclusion, if you’re a hotel owner, don’t scrimp on coffee. I know it’s cheaper, but your savings are not worth the bad taste in everyone’s mouths.

A storm struck right as the guys were prepping to take off, so they hung out in the lobby for half an hour and waited for it to pass. 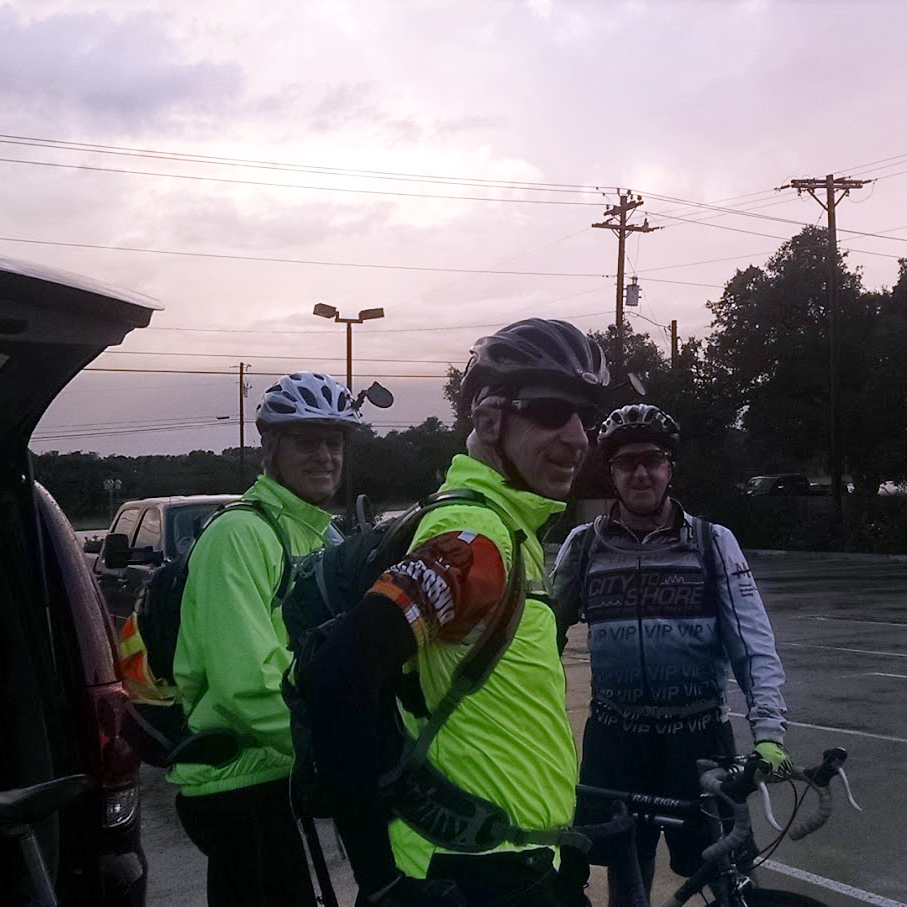 Not really in the mood to pose

Their ride was wind assisted and therefore speedy. My drive was short and entirely forgettable; it’s two days later and I have already forgotten it. The bikers actually beat me to the La Quinta in Kyle by a few minutes, all of us arriving a little after noon.

Mark and Tim didn’t invite Brian to the hot tub because they knew he would just be bugging them to hurry up to leave for the LBJ Library. After the secret hot tub session everyone convened in my room and we decided on pizza for lunch. I thought we were going to try a local place, but the guys had passed a CiCi’s, a buffet-style franchise with which you might be familiar, on the way in, so that’s where we ended up. 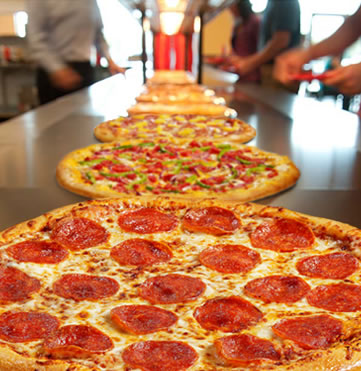 Next up: the LBJ Library and Museum! 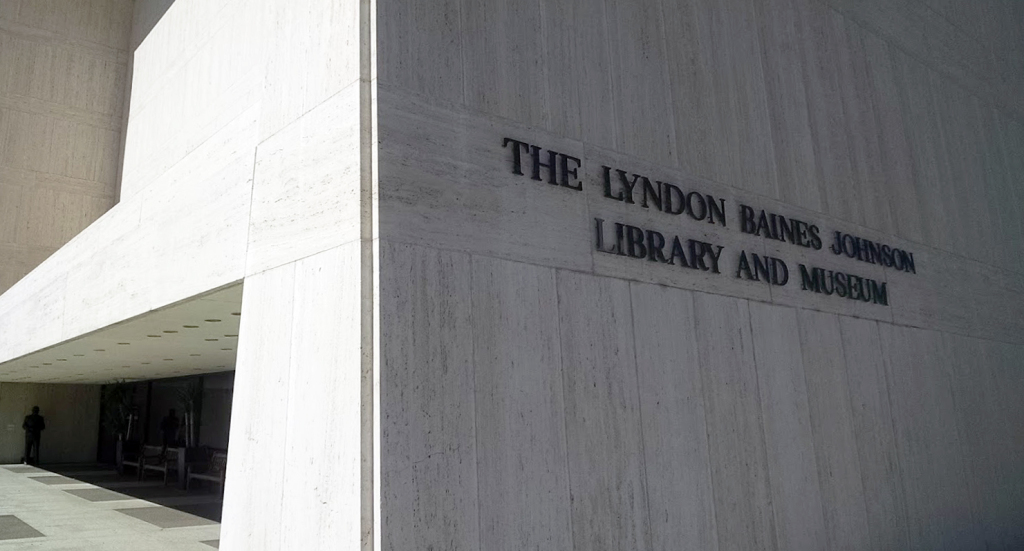 The brutalist building seems to suit LBJ’s personality — which is not to say he was brutal, just forceful

Its feature exhibit was on sixty influential people from the 1960s. I thought the museum did a nice job profiling people you (or at least I) might not already know much about, like David Ogilvy and Berry Gordy, along with more well-known names like Charles Schulz and Kurt Vonnegut.

One neat interactive feature was a free jukebox with a selection of influential recordings, again with a nice mix of popular and lesser known. 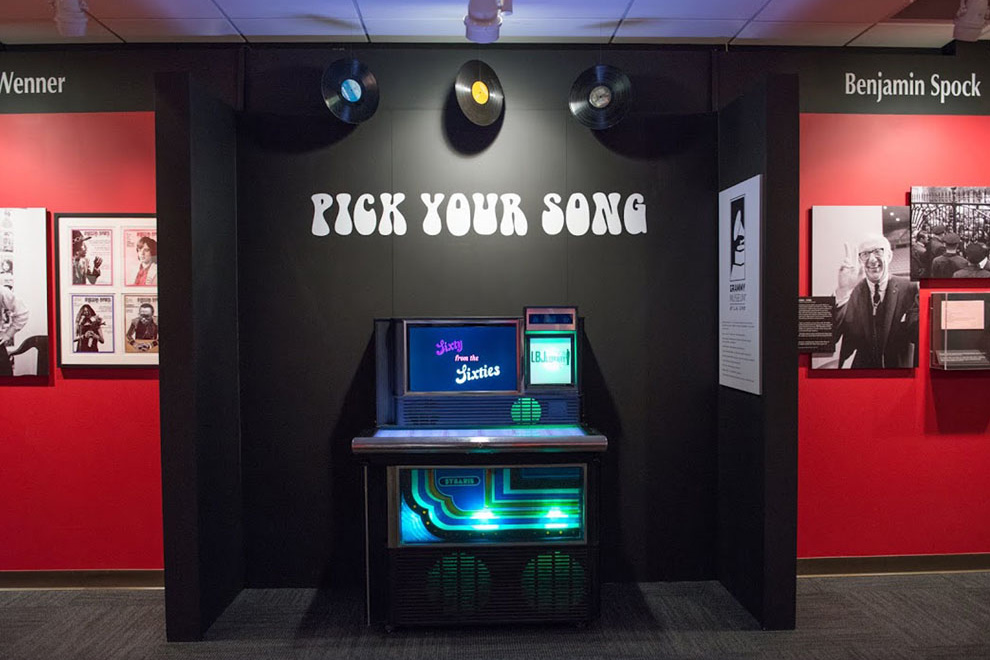 I waited till it was free and walked up to take a look at the songs, planning to choose a crowd-pleaser for the guys. I noted they had an obscure Led Zeppelin track on there, which pleased me. But before I had a chance to pick my song, a guy, 40ish, came over and stood next to me. He asked how to do it and I explained it to him: “I think you pick a letter and then you pick a number.” You know, like on every jukebox you’ve ever seen. I should have said, “Um, I was about to pick something,” but when I feel uncomfortable I usually try to make the situation end in as quick and conflict-free a way as possible. I’m working on this.

He pushed a letter and hesitated. “Okay, now you pick a number.” He put on Coltrane’s “A Love Supreme” — a fine choice, but I wasn’t about to say so after he usurped my turn — and kept standing there, so I walked away. I have no idea if it was an idiotic attempt to hit on someone in a museum or if he was just clueless. Maybe standard jukebox etiquette doesn’t apply in a presidential library.

Doofus aside, I enjoyed the museum a lot. I particularly liked listening to LBJ’s phone conversations and could probably have spent a few hours doing that. I listened to one he had with Jackie Kennedy just a couple of weeks after JFK’s death in which he tells her that she should visit whenever she wants, and she must still be in shock because she’s breathless and coquettish and giggly the entire conversation. It was fascinating.

I also learned that he founded the Corporation for Public Broadcasting. 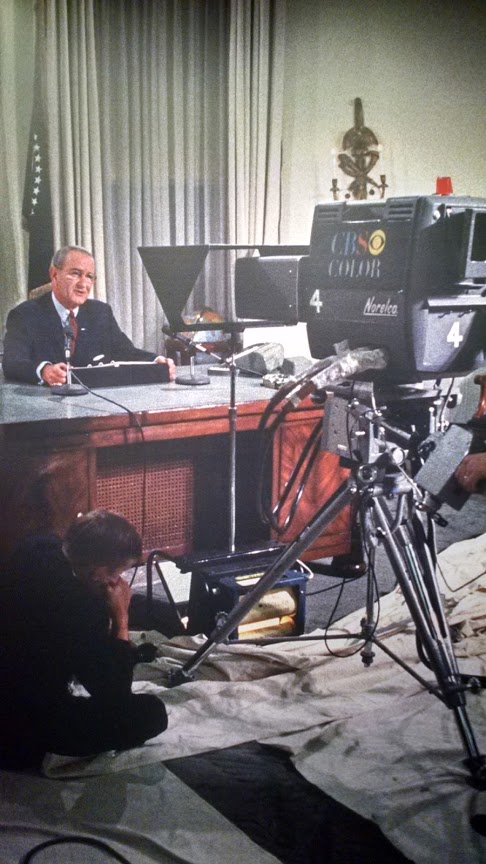 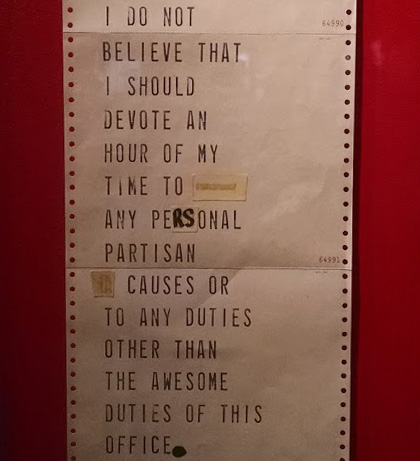 Teleprompter page from the speech 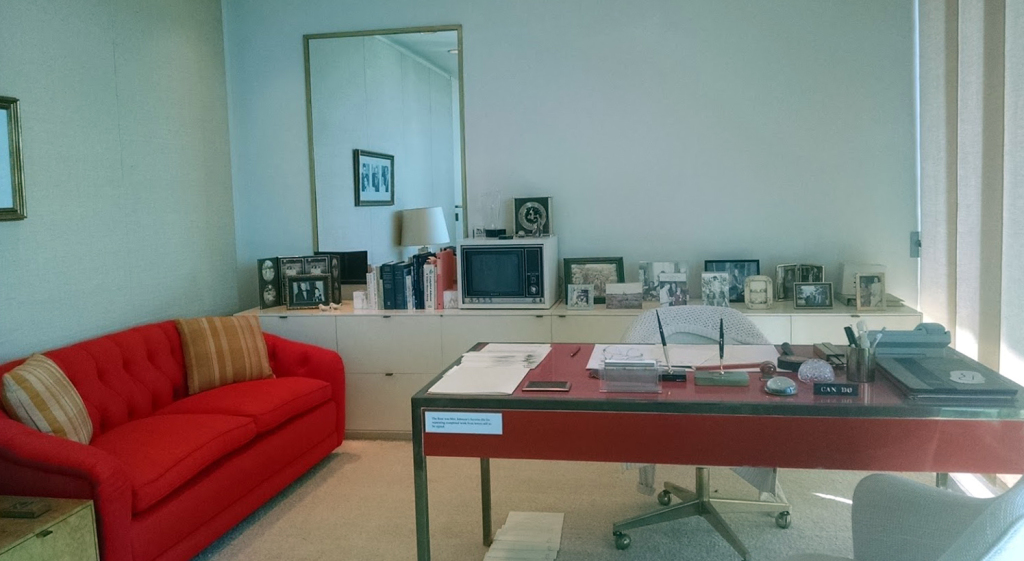 Replica of Lady Bird Johnson’s office. She would sort her files by making piles on the floor. I do this, too.

After the museum, we ate a quick but delightful meal at the nearby Salty Sow, then drove back to Kyle in rush hour traffic. I used the Waze app (which I downloaded after Laura recommended it on her blog — thanks!) and while it couldn’t do much for us that day, it is a cool tool. 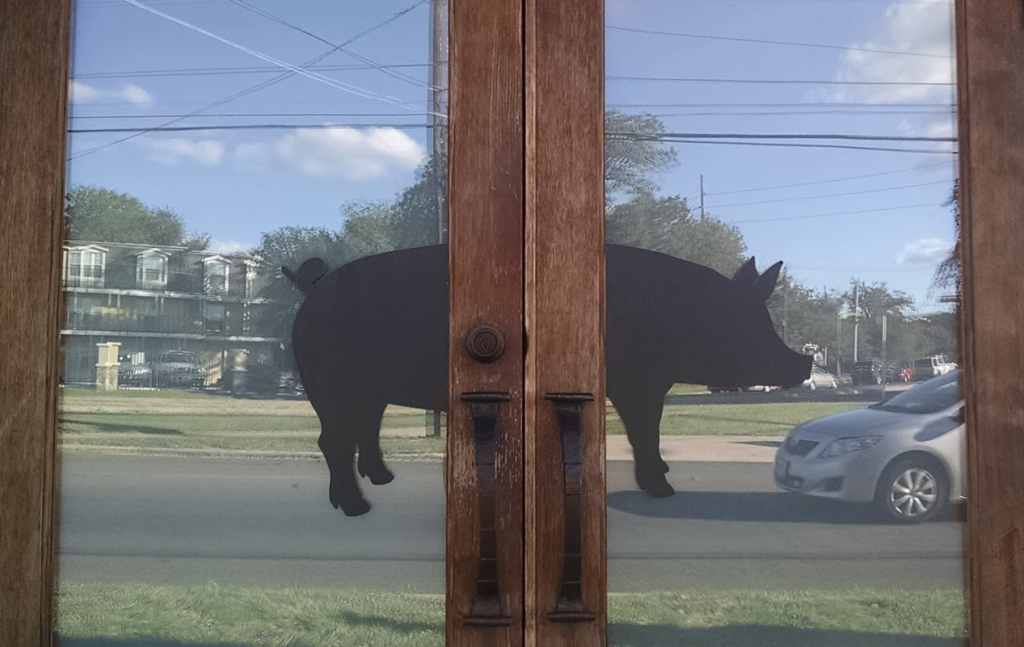 Back at the room, I performed blog assistant duties and half-watched “Dancing With the Stars.” Carlton is pretty good, huh? 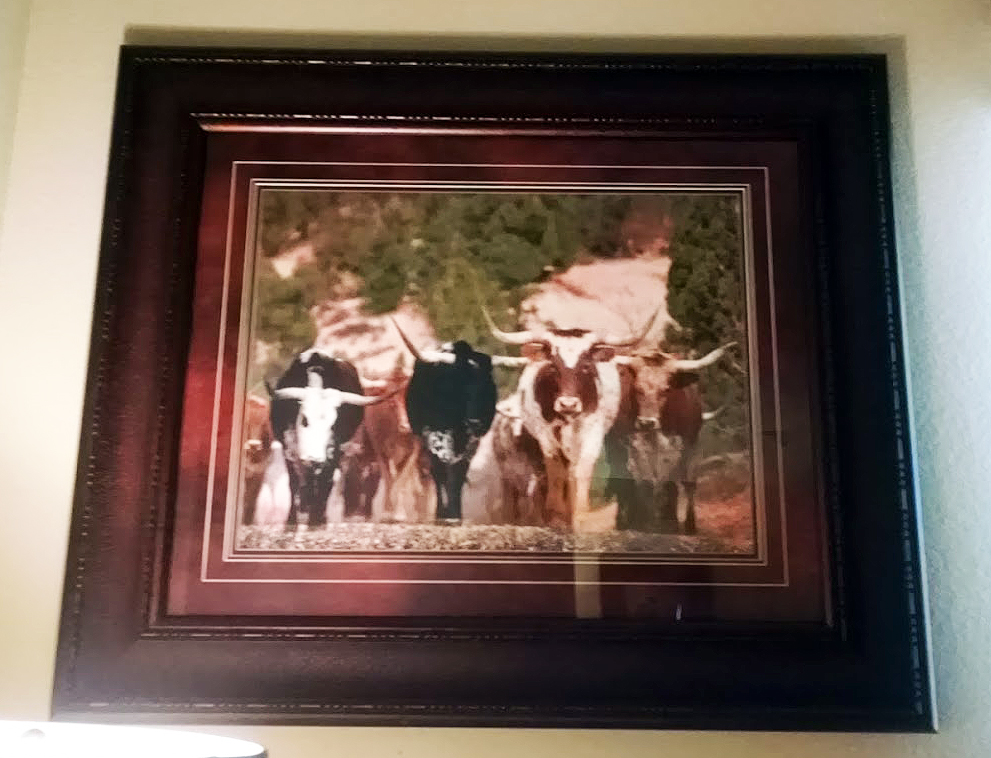 Sorry about the poor quality, it was tough to get a good, non-glarey shot of this.

7/10. This is like if Michael Bay were a cow and made a movie about other cows. It made me smile every time I saw it. 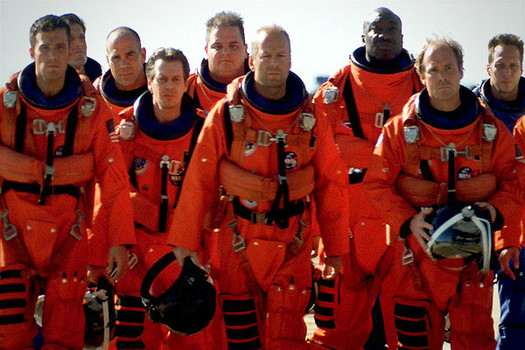