I forgot to tell you about my podcast concept. The show would be called “Beth’s Bar and Grill.” For each episode, someone would come over to my apartment and I’d make dinner for them, or we’d just have some drinks, and they’d talk about their lives and their problems. I’d ask my guests probing, sometimes daringly personal questions. The cast would rotate, so listeners could check in on developments in each person’s life periodically and be able to start seeing patterns in the types of turmoil people are experiencing in our modern era. It would essentially be like listening to therapy sessions, but with some joking around and slight inebriation. If you live in or around the New York City area and would like to appear on “Beth’s Bar and Grill,” please send an email to barandgrillpodcast@gmail.com.

Day 3, Saturday, started off gloomily. I woke up at 4:30. Breakfast was a soggy hard-boiled egg and a wheat English muffin. I will make different choices at our next Holiday Inn Express because I deserve better. 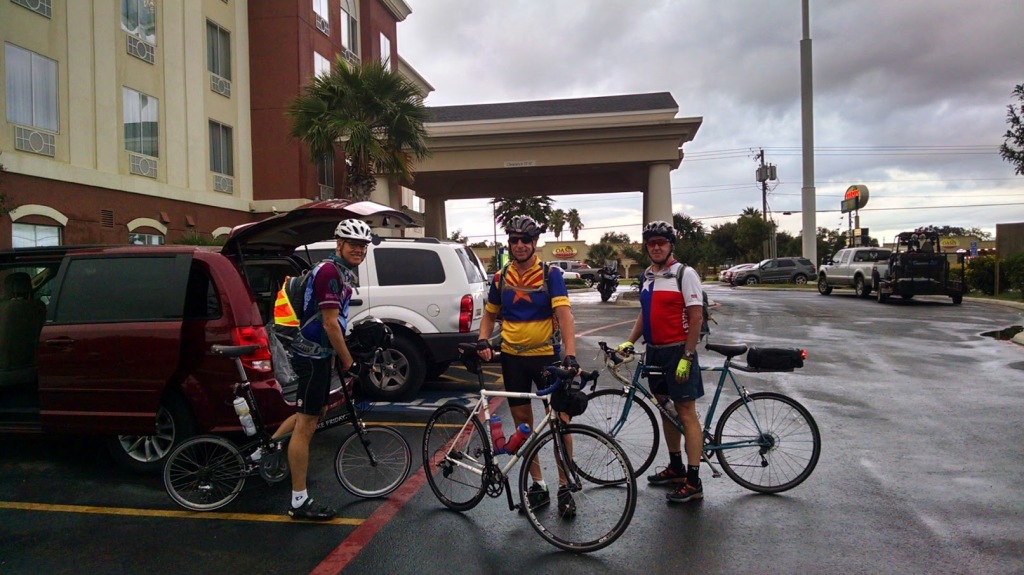 Ginger and the boys

The guys began their arduous journey at 8. I left the room at 11:30 and stopped at Walmart for fruit and sundries. The bluetooth FM transmitter I’d been using to listen to music in the car stopped bluetoothing, so I had to find a replacement, because radio options around here are dire. Walmart couldn’t hook me up, but there was a RadioShack in the same shopping center that could.

The Uvalde RadioShack was undergoing some major product rearranging, an odd undertaking for a busy Saturday; the floor was a Slip ‘N Slide made of little boxes of electronics. I slipped but fortunately did not slide. And I found a new transmitter. It kind of sucks but it gets the job done, mostly.

It was a lovely drive, the first really green drive of the tour, with winding hills and unusual wildlife — antelopes! — and cloudy, gothic weather. And as usual on these trips, when the road is empty and the scenery is beautiful and I become aware of my solitude, I feel an overwhelming love of life. 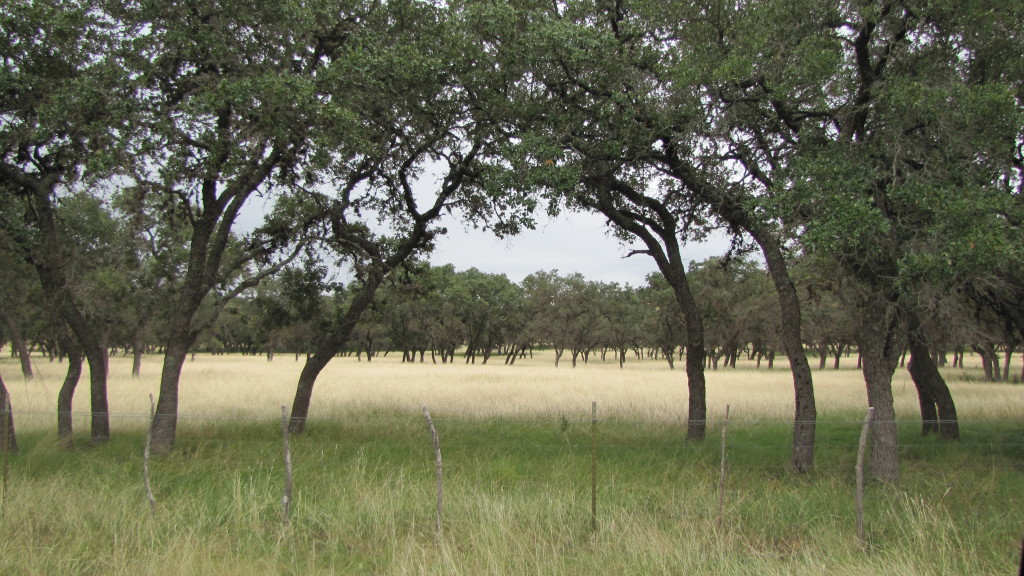 I met up with the guys around 1, a little more than halfway through their day. They were having a tough ride but spirits were high. 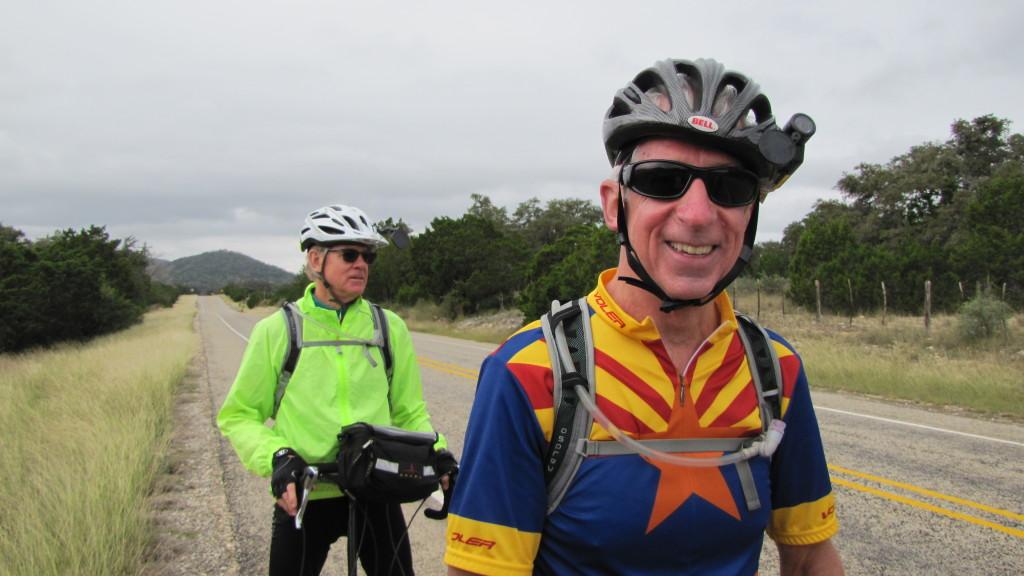 About half an hour later, Ginger and I made a wrong turn and headed into the town of Bandera rather than toward our B&B. It felt like a real old-fashioned frontier town, with a short strip of shops, restaurants, a church, and a courthouse. My impression was certainly helped by this, which stopped traffic as it made its way down Main Street: 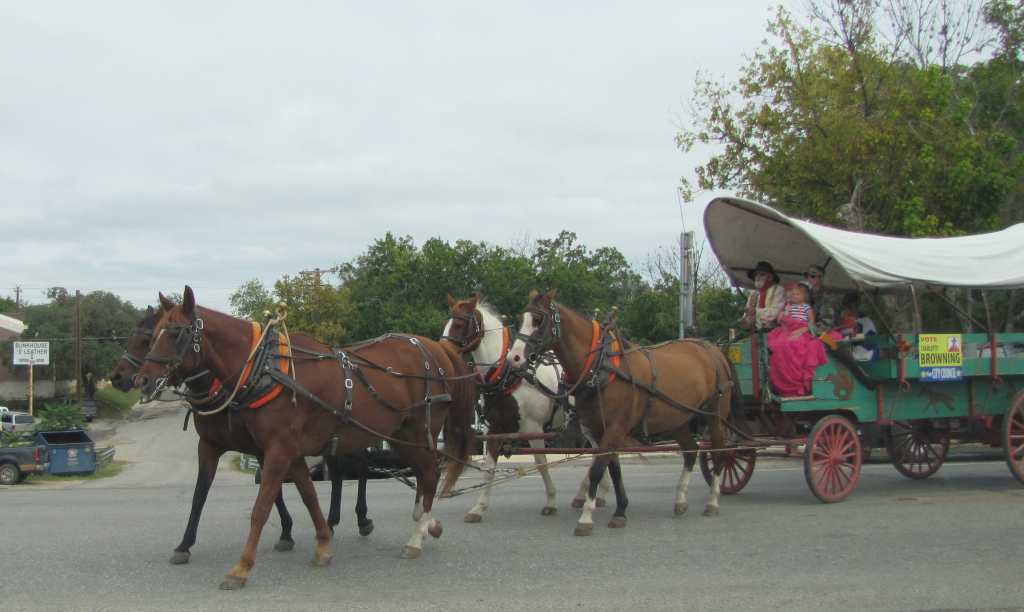 I arrived at the Diamond H B&B a little after 2 o’clock. The place looked welcoming but deserted; Ginger was the only car in the lot. I found the door to the office open and walked in. It looked like someone had been there moments before; the desk had a few sets of keys on it, and there was an open pack of cookies on the coffee table. The office led to what was clearly a living space, a sofa and dining table visible through the doorway. Something told me not to call out — probably my dim memory of reading that check-in was a firm 3 p.m. I decided to undo my cavalier entrance, head back outside, and alert them to my presence by doorbell.

I doorbelled. Then I knocked. No one answered. I went inside again. Still no one there. I went outside and walked around to the front entrance — aha, I just need to ring the front doorbell! But there was no doorbell at the front. So I knocked. I peered in the windows. Nothing.

One summer day when I was five years old, I asked my mom if I could visit my friend John, who lived a couple blocks away at the bottom of our street. I didn’t usually go places by myself at that age, but my mom let me walk to kindergarten and to visit friends in the neighborhood, which in hindsight was really cool of her. When I got to John’s house I knocked on the screen door, but no one answered. Having committed to the idea of visiting John and not knowing the protocol for pretty much anything at that age, I let myself in and walked through the rooms downstairs. But John wasn’t there; no one was. I started getting the sense that I shouldn’t be in the house, that something was wrong there. But instead of leaving, I started climbing the stairs to the second floor to investigate, growing more trepidatious with each step. About midway up I heard a radio on in one of the rooms, and that was it. I freaked out — I have a snapshot in my memory of the moment when fear overtook me, the way the sun was hitting the stair railing, the bedroom door to my right slightly ajar — and ran as fast as I could out of John’s house and back up to mine. I never told him about it.

I went in the back entrance of the office one more time, hoping mildly that there had been a gruesome murder and I was about to discover it and it would be like Columbo. I realized that if there had been a murder I was probably in danger — the murderer would still be at large, as they say — and noted it was odd that I didn’t feel like I was in danger. And then of course I self-corrected and thought that I didn’t really want anyone to have been murdered, I just wanted intrigue. You know, for the blog.

When I peered through the office doorway I heard TV sounds and saw an older man on the sofa watching it. He did not see me.

I decided to leave and come back in an hour. Peeing would have to wait.

I filled up Ginger’s tank and took my time picking up a couple six-packs. When I got back to the Diamond H, it was after 3, which to me meant it was safe to call out. After a couple “hellos” a nice lady — Sharon — came out in stocking feet and got me settled in. The bikers arrived not long after. 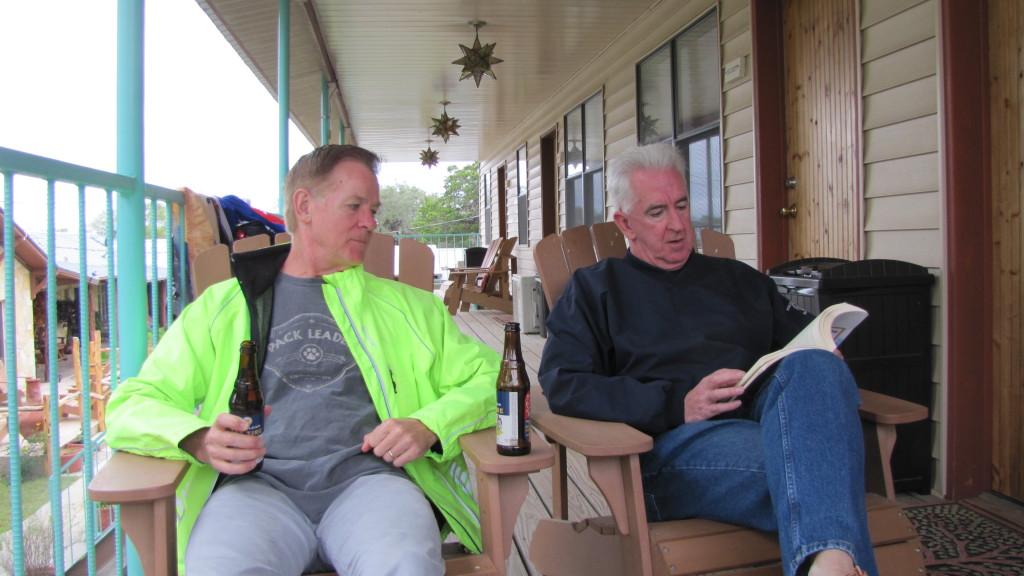 Our trusty reader Tim returns, with his inimitable pronunciation of places and names

Jim, the guy I’d spied watching TV, was friendly and amusing, a natural storyteller. I asked him for a restaurant recommendation and he said we should go to O.S.T., “a steak and potatoes place,” but warned me that it wasn’t like a New York City restaurant. It sure wasn’t, but that’s what we’re here for. 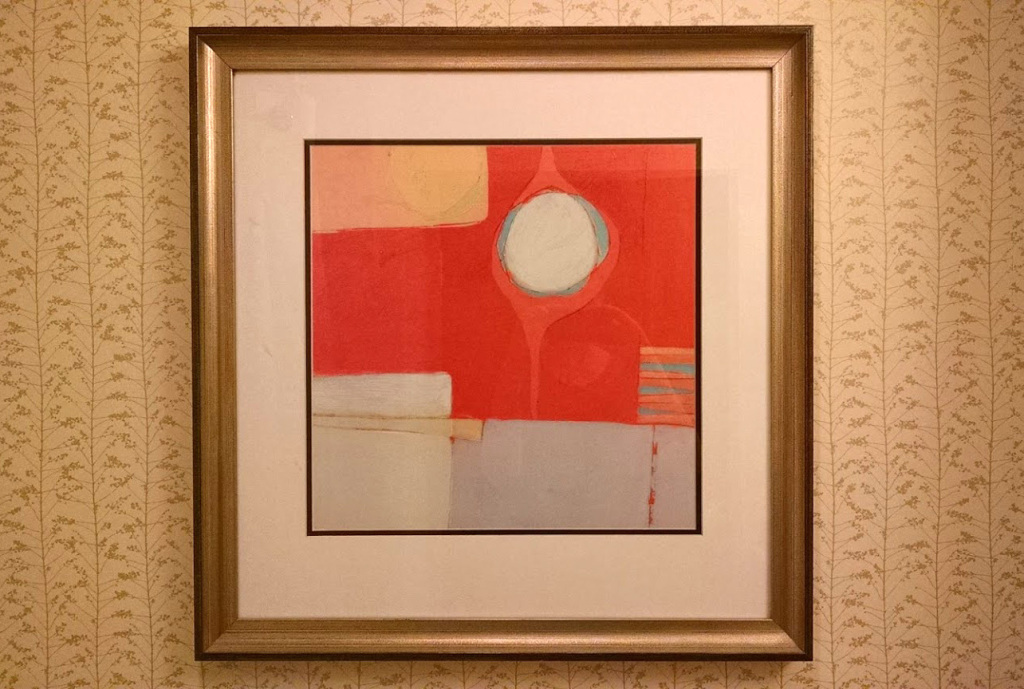 9/10. This was in the bathroom and I always liked seeing it when I entered. You can’t tell from this photo, but the brushstrokes are visible, which adds energy to it. It’s playful; the colors are harmonious and it’s got a nice overall vibe. It’s like art lite — a cheery, mass-produced doodle. In fact I might just like it because it looks a lot like the doodles I make during conference calls, except colored in.

6/10. (It’s on the line between a 5 and a 6 but why not just give it a 6?) I think the artist might have actually cared about this in a nonchalant way, and that counts for a lot.