Today we got up shortly after 6 am, packed up the truck, and drove off the lot of the Outback Oasis motel, which was easily the worst accommodations we have stayed in this or any leg of the bike trips.  The bugs at the Outback Oasis, flies, ants, etc. might have enjoyed it, but not us.  Mark was somehow able to tune them out, but I was not and neither was Beth.  After a really good breakfast taco (bacon and eggs on a soft corn taco), we started the 30 mile drive past Dryden, where Beth picked us up at the end of the day yesterday.  Here are two videos I took early this morning, one on the drive to our drop-off point, and one shortly after starting out on our ride.  It’s pretty dark in the first video, but you can see the headlights from our Silverado pickup truck, and the white line forming the edge of the eastbound lane of US 90.

We had ambitious plans for today!  We wanted to bike 92 miles from 10 miles east of Dryden all the way to Del Rio.  But, unfortunately, the wind had other plans, which you can kind of get a feeling for from the last video.   I think about the time we were 30 miles out and pulling into Langtry, TX, we realized that we weren’t going to make it.  The winds were a steady 15-20 mph with gusts up to 30 mph, and they were mostly headwinds.  Once we crossed the Pecos River, the winds became a combination of head and cross winds, and they were relentless, not to mention discouraging.  It was all we could do to pedal between 8-10 mph on the flats.  When we were riding uphill, and there were a ton of hills today, we were moving at a 5-6 mph clip.  So after having traveled 30 miles in more than 3 hours, it was likely going to take us until sometime after 6pm if we continued to Del Rio.  So we opted to make it to Comstock, another 30 miles away, and have Beth pick us up there, which she did at 3:45pm.  Our average speed for today was under 10 mph.  Oh well ….

Aside from the wind, the day was nice.  It was sunny, and it warmed up from the 54 degrees we started with all the way up to 85 degrees by the time Beth picked us up in Comstock.  Traffic along US 90 was fairly light and 99% of the drivers were extremely courteous, moving all the way over to the left when they passed us.  Like most of US 90, the stretch between Sanderson and Comstock was just 2 lanes total, but with a speed limit of 75mph.

For me, the highlight of the day was our visit to the Judge Roy Bean Visitor Center in Langtry, TX, just a mile off of US90 on TX Spur 25.  There they tell the history of Judge Roy Bean, the law west of the Pecos.  His buildings are still there, restored no doubt but shown in the condition in which he occupied them.  The bonus part of the visit was the Judge Roy Bean cactus garden! Here are some photos from our visit.  If you’re ever in west Texas driving along US90 west of the Pecos River, don’t miss it! 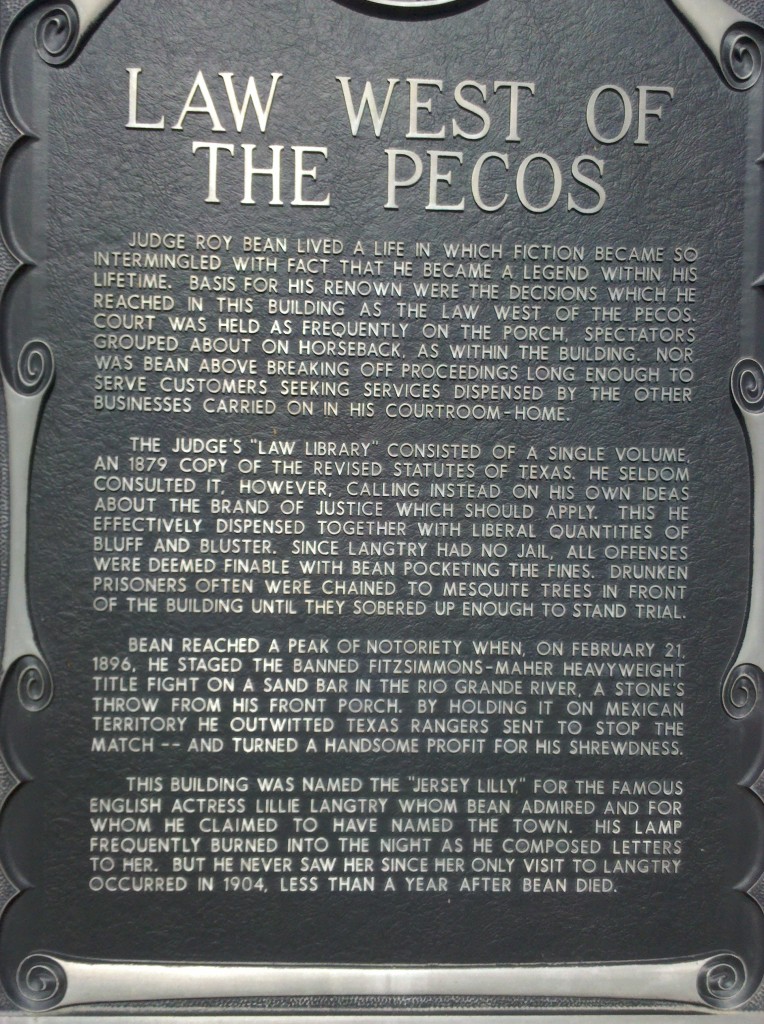 This historic marker at the Judge Roy Bean Visitor Center in Langtry, TX, tells more of his story and his shrewdness, especially when it came to making a buck! 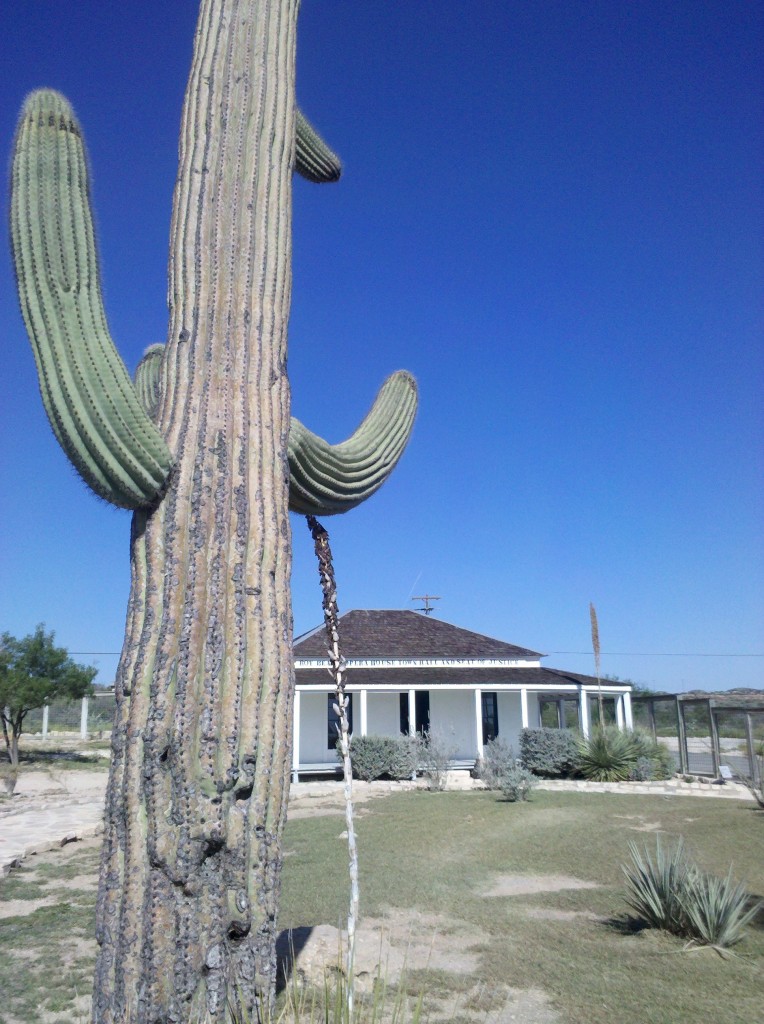 Saguaro cactus in Judge Roy Bean Visitor Center, Langtry, TX. The only saguaro cactus we have seen on Leg 3 have been at Langtry. 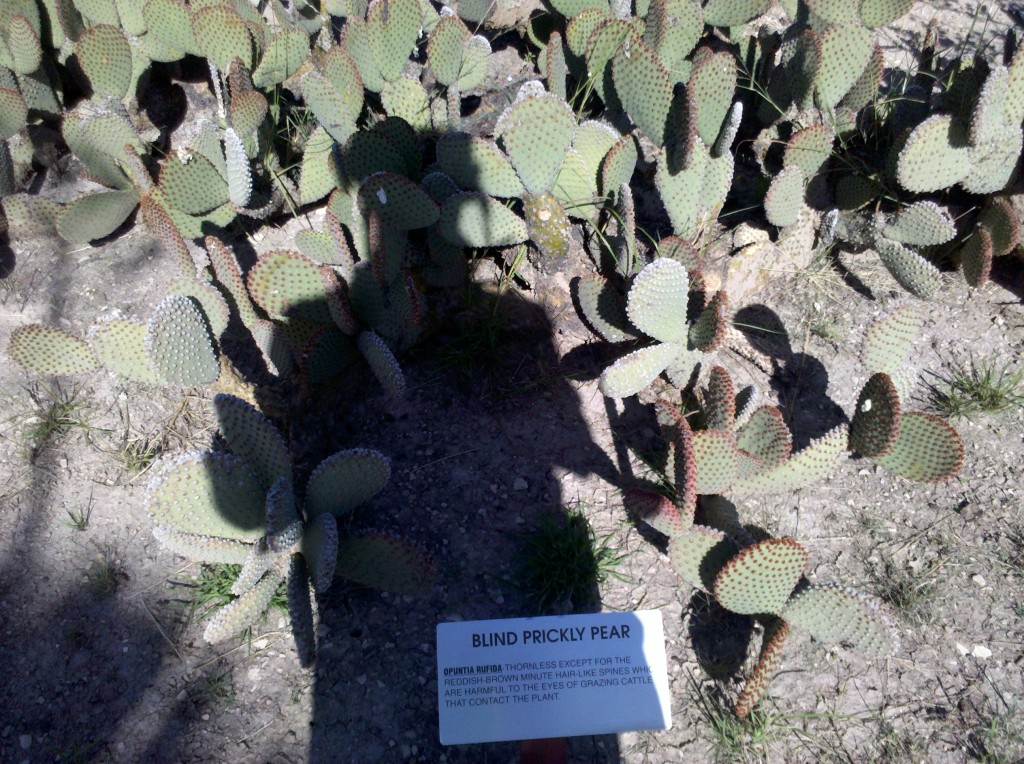 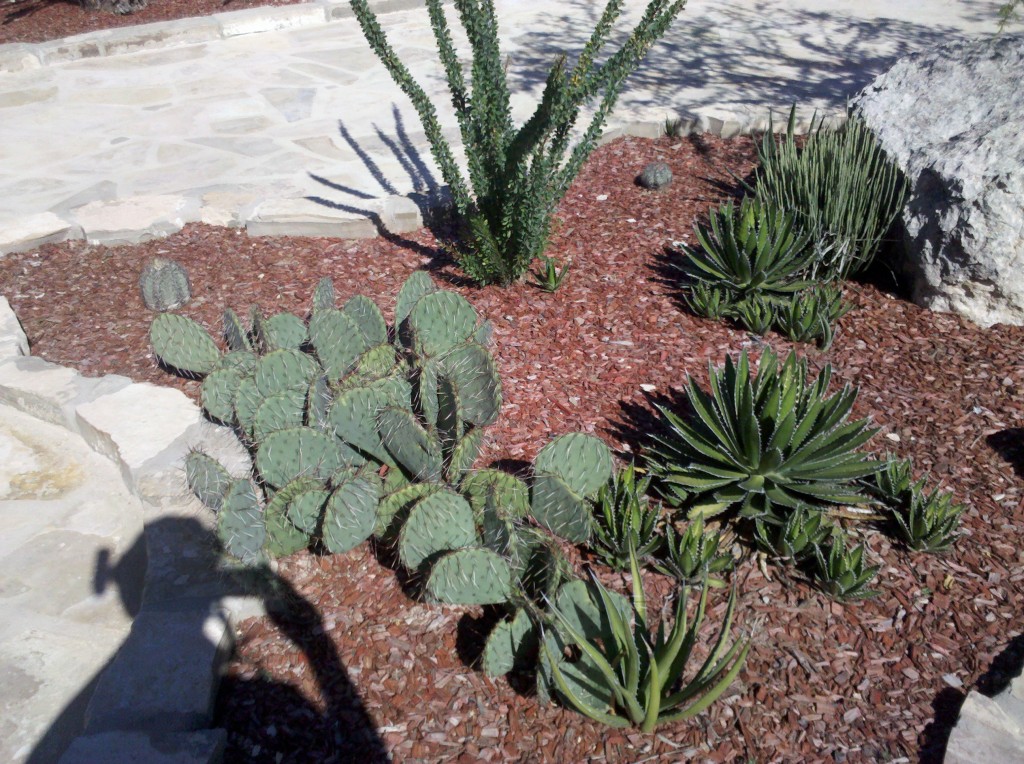 Prickly pear, Ornamental Agave, and Ocotilio cactus in Judge Roy Bean cactus garden, Langtry, TX. Mark and Tim were getting a bit concerned that they’d have to remove me by force from the cactus garden! 🙂 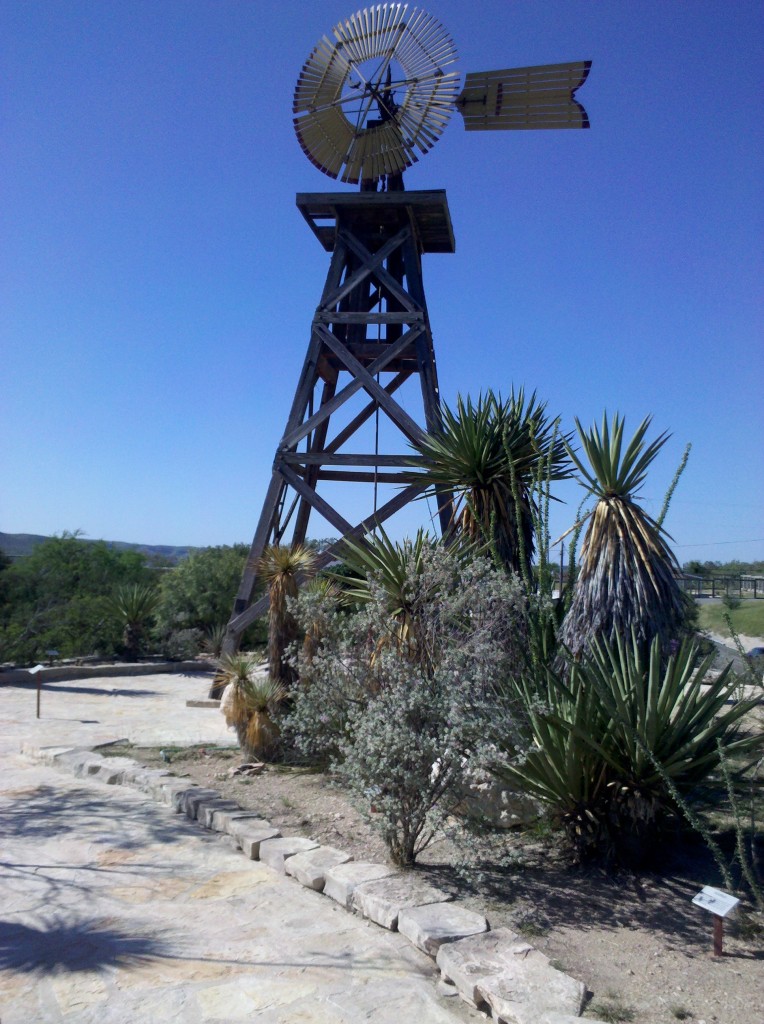 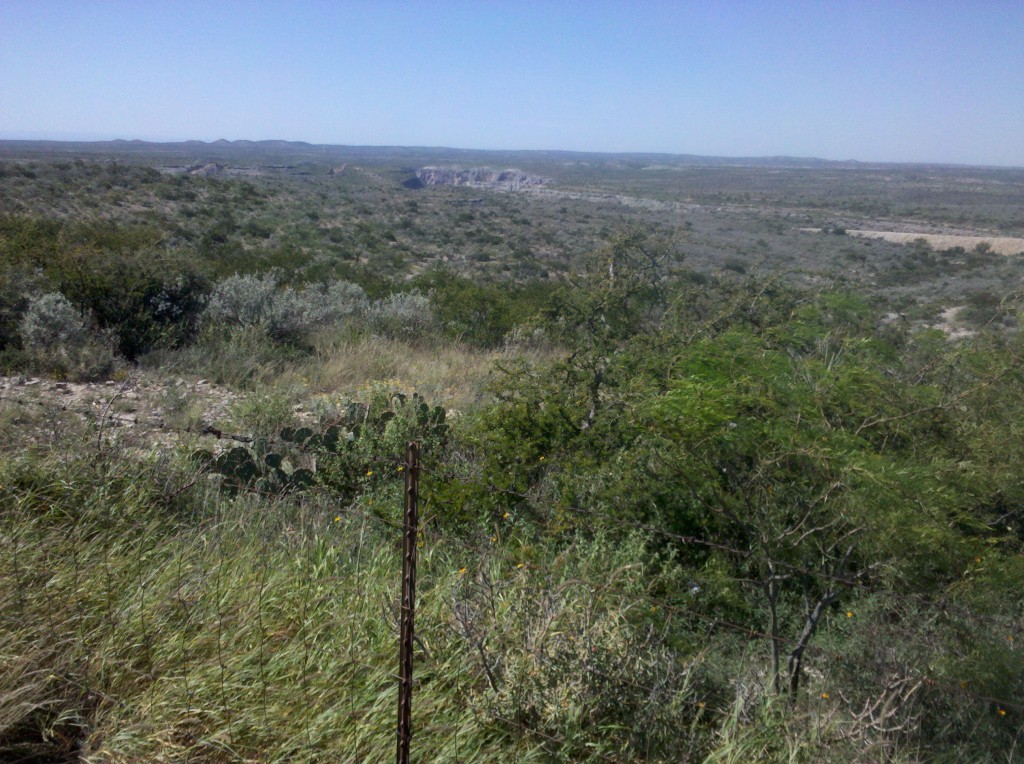 Gorge just west of Pecos River. This was my only “scenic” shot of the day, but Mark took lots of them on the ride.

The only other remarkable thing about today was the omnipresence of Border Patrol personnel.  I think we must have seen at least one vehicle every 30 minutes on the ride today.  Here is a video of a Border Patrol vehicle driving next to US 90 on a kind of a frontage road, except that it is gravel and not paved.  The vehicle is dragging three big tires behind it, which are sweeping the surface of the gravel road clean of any footprints.  It’s a little difficult to see the tires, but they are there in the very bottom right of the screen.  By sweeping the road, the next time they drive the road, probably early tomorrow morning, they’ll know if any people came along or over the gravel roadway.  We’re just a few miles from the border with Mexico, and within 40 miles from Del Rio, which is on the Rio Grande and right next to the Mexican border.

We’re having dinner at Chili’s (the best that Del Rio has to offer) and deciding what we’re going to do on tomorrow’s ride.  We’ll let you know tomorrow what we decided to do.  Bet you just can’t wait! 🙂

The only other thing I want to mention tonight is that I am reading a book loaned to me by Mart Lou Brogan, one of Nancy and my friends from our college years.  It’s called “The Given Day,” by Dennis Lehane.  It’s a very enjoyable read and I’ve been talking about it during almost all of our meals, but Beth, Tim and Mark might all want to read it, so I can’t give away any of the plot.  When I finish reading it, either on the plane home or possibly even before, I’m going to miss it.  It’s 700 pages long, but it’s moving very quickly.  So thanks Mary Lou, if you’re reading this!