I’m a day behind. We apologize for any inconvenience. 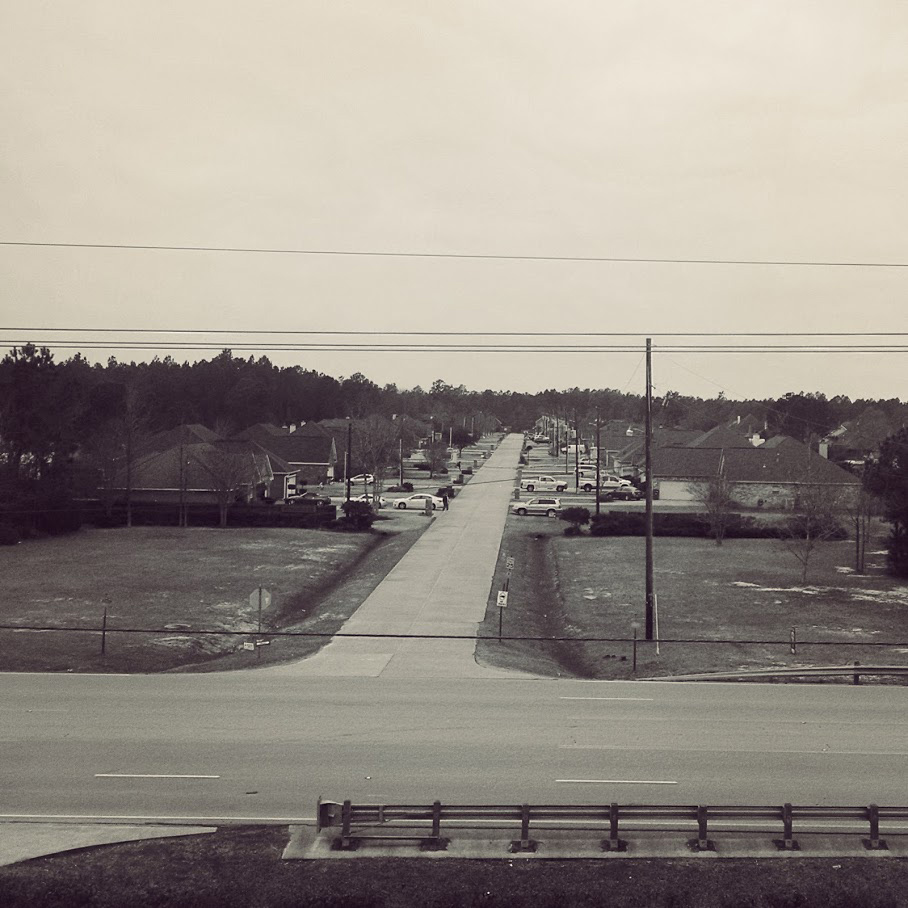 Lumberton, Texas, a little after sunrise 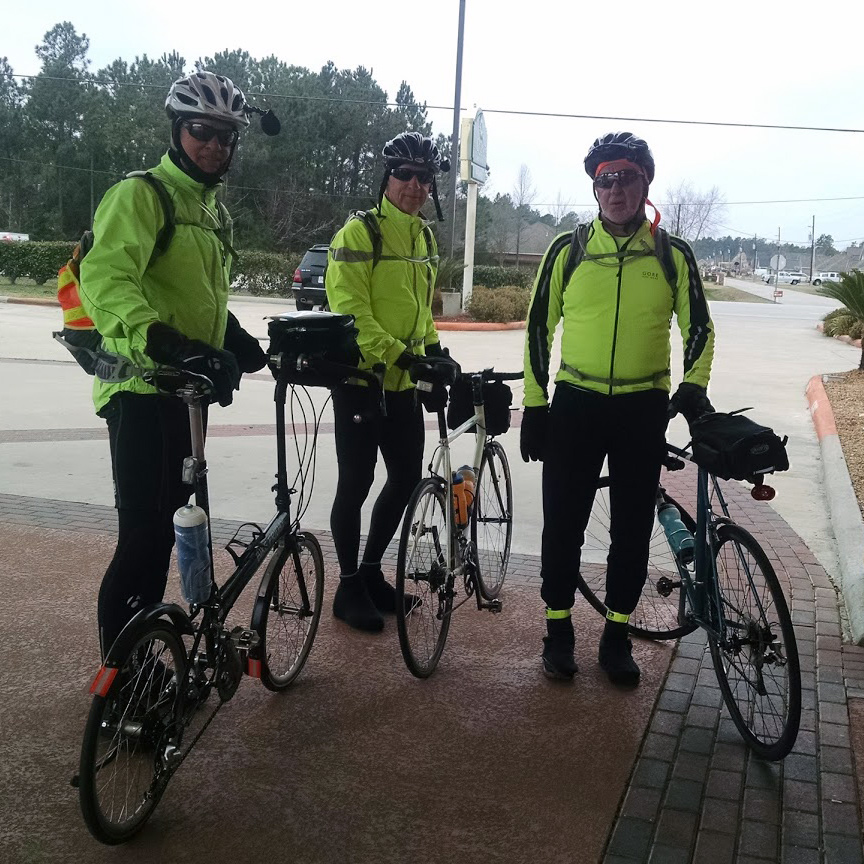 At the start of another cold day

I worked for about five hours on Friday but didn’t finish the thing I’d really wanted to finish, so I left the hotel in a BAD MOOD.

On my way out of town I had to make a hairy left turn onto a busy street. After waiting a while I finally saw an opening and started creeping into the lane of oncoming traffic; I just needed the traffic on my right to pass, and in seconds it would. But suddenly a car coming from the right turned left onto my street, taking my turning window. Meanwhile, a semi truck was bearing down on me from my left, and I didn’t have time to accelerate quickly enough to clear it. So I backed up to avoid death. But it was scary and did not improve my mood!

The drive was neither here nor there for me; it was too crowded to achieve the sense of oneness with the world I’ve found on previous trips, and I was pretty distracted thinking about work. I contemplated moving to my parents’ shore house for the next six weeks so that I would be forced to work all the time and wouldn’t have to engage with the things and people I care about. And somehow having and then discarding that thought freed me. Also Spotify (or God) kept playing jazz as if it knew my brain needed to break out of its overly trodden stress grooves.

I’ve been listening to a mix Andy made from Tom Moon’s 1000 Recordings To Hear Before You Die on shuffle on drives going back to L3, I think. It’s incredibly diverse and about 93% awesome. (If you want in, let me know and I’ll share it with you.) After listening to it semi-regularly for more than two years, I still encounter tracks I’ve never heard before. But whenever you’re with people and try to turn them on to it, it plays stuff that makes you look weird for liking it. There should be a term for that phenomenon, as well as for the phenomenon of your computer slowing way down whenever you want to show someone something on it. 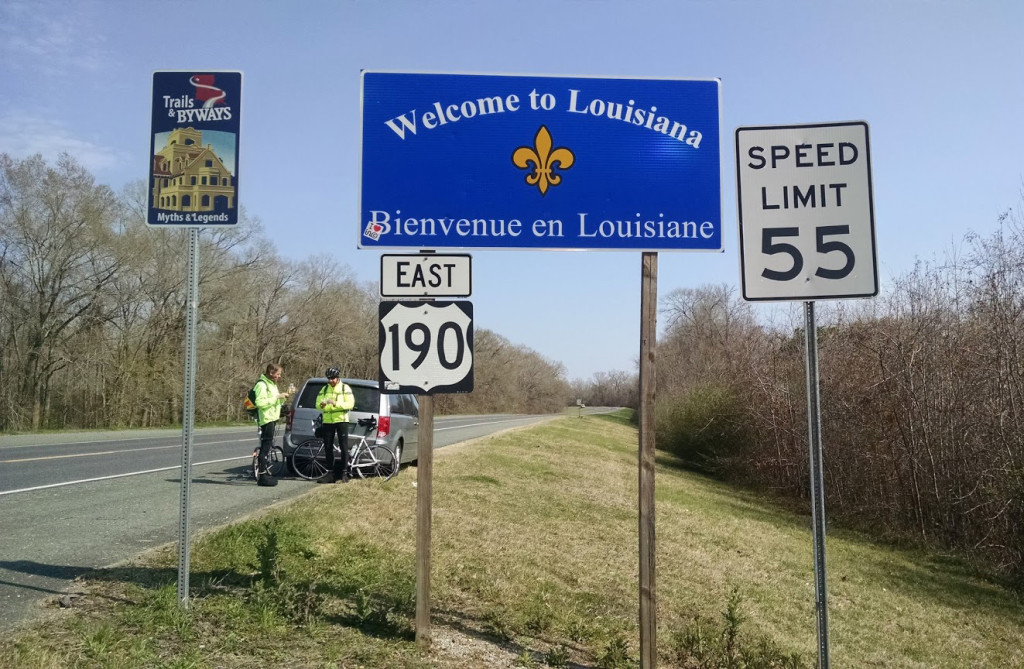 I happened to catch the guys right at the border 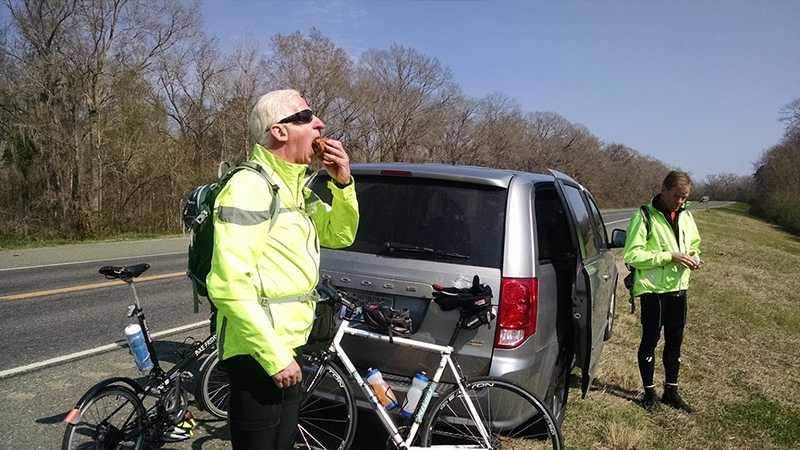 Dad is enjoying his fruitcake

Let’s pause for a moment to marvel at the great state of Texas. We crossed into El Paso on the last day of L2 and spent the next two legs exclusively in Texas. It is pretty much its own country, and like most countries its people and culture are varied. Despite spending 19 days in it, we barely brushed its expanse.

It was a short drive to DeRidder after crossing the Louisiana border, and I pulled into the parking lot of the first grocery store I saw to replenish our beer supply. A clerk saw me wandering around like a clueless dope and asked if she could help. I said I was looking for six-packs and she told me they weren’t in this building but in the brown one just outside. Okay.

But first I decided to buy some seltzer, because I had found good, unexpired seltzer in nice glass bottles. All previous bottles I’ve had on this trip have gone flat after one sip, and I realized it was because they were all expired. (My bottle from Day 2 expired in November 2013.) Anyway, the checkout girl at Brookshire’s was frazzled and gave me change of $11 instead of $16, and it was kind of an ordeal to get that $5, but not one worth describing. And yet I’ve spent three sentences almost describing it, so why stop now? But I am.

The brown building was a tobacco and liquor store. There were maybe eight kinds of beer available. That is not a lot of kinds. It seems that in Louisiana liquor laws are determined by municipalities rather than by the state. In New Orleans, for instance, you can drink pretty openly wherever you go, but in this part of the state they seem really uptight about it. Anyway, I picked up a sixer of Fat Tire Amber Ale.

When I saw Wal-Mart next to our Best Western, though, I stopped in, thinking they might have beer with hops, and thinking also that somehow Wal-Mart would have found a way around the separate tobacco/liquor store requirement. Yes and yes. I stood for a while in the busy self-checkout line only to learn after trying to scan my beer that you can’t self-check alcohol.

Dad wanted pizza for dinner, so we ordered from Domino’s and blogged quietly in my room while we waited. The pizza arrived and tasted good. Tim read to us from Crossing the Borderlands. It was a nice night.

After dinner Dad and I walked over to Wal-Mart for more mini wine bottles. We stood in the line of a young lady, and she told us in a very teenager-y way that she couldn’t check us out but would call someone over. She called us “you fantastic people” twice and pronounced receipt “reh-seh-pit” on purpose. She looked mildly like perpetual teenager Kristen Stewart and had a streak of green in her hair.

In conclusion, I learned a lot about how to purchase alcohol in this part of Louisiana. 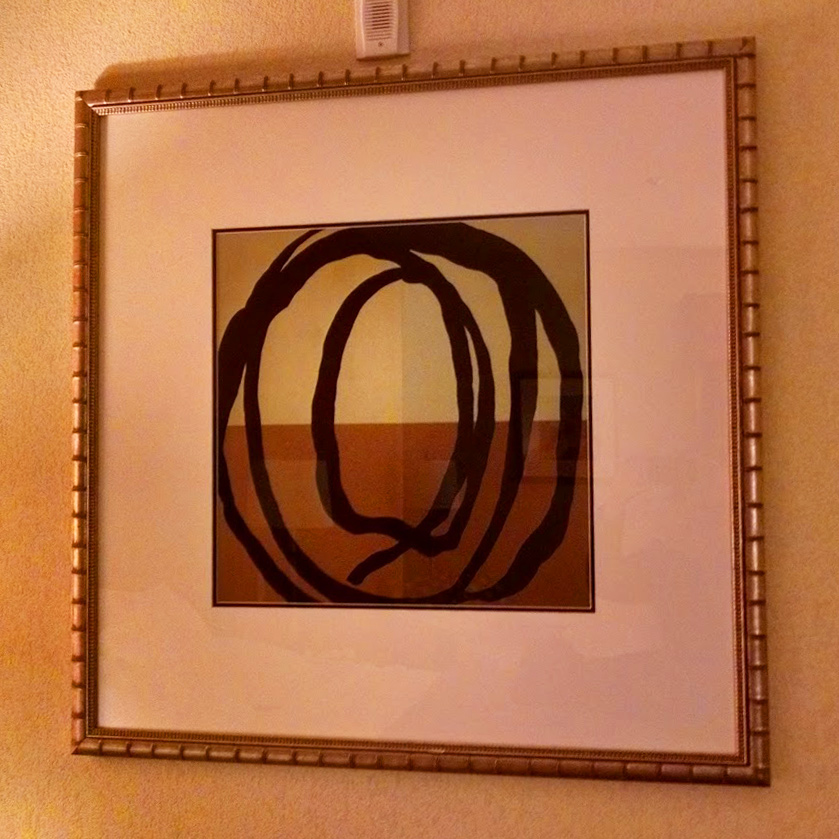 6/10. When I first saw this and its companion, which is similar but has squares of different colors and a scribble that resembles a scary face, I thought, “Oh, brother.”

But then it grew on me. Maybe it was because everything else about the room was so inviting, but I ended up feeling warmly toward it. I am able to see it as a statement about the potential for harmonious co-existence of chaos and order.

3/10. I think that I’m imposing that meaning on it and it’s actually just some cynical hotel art meant to tie in the room colors but add some visual panache. But I’ve thought more about this than usual.