Posted by Brian on February 25, 2015
Posted in: Brian. Leave a Comment

Yesterday (2/24/2015) I flew from Philadelphia to Houston on a remarkably pleasant US Airways flight.  It took off at about 11:45 a.m. with the bright sunshine doing its best to warm things up outside.  I had a window seat in the Exit row and paid attention as we flew along the Delaware River, until somewhere between Chester and Wilmington, after which the plane headed in a more westerly direction overland.  The Delaware River was not completely frozen, although sections of it looked walkable.  It had lots of ice chunks in it, as expected, since it has been so cold for so long.  I wonder what the Schuylkill River looks like ….  Anyway, I met up with Beth at Houston’s George Bush Intercontinental Airport, and we drove to Navasota, checked into our hotel, and then went out to dinner at an excellent Mexican Restaurant right on Texas 105.  I only had one magarita (with salt on the rocks, if you care) and after returning to my room, managed to get my bike put together in record time (for me) – only 90 minutes! 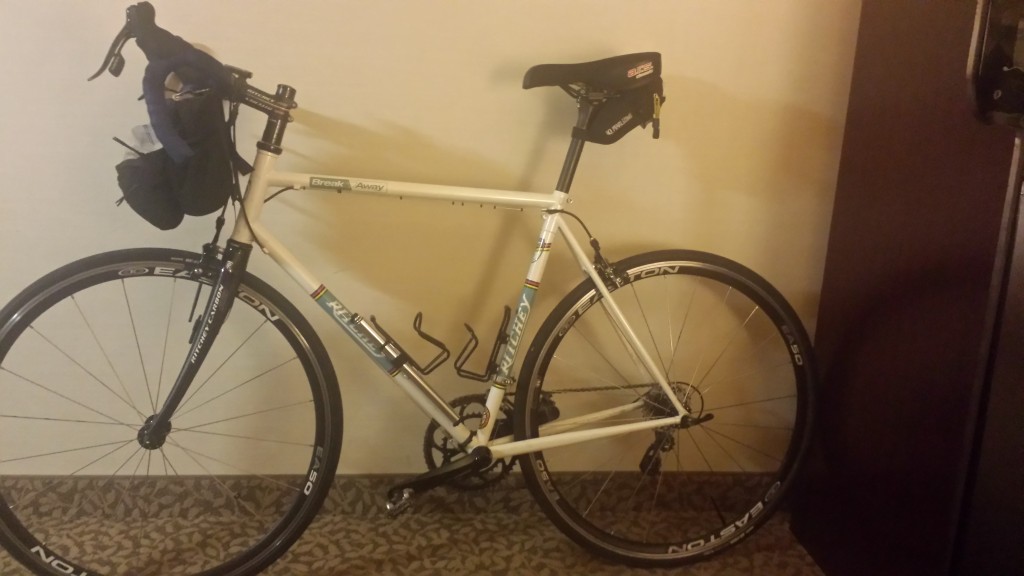 I was able to put my bike together in record time (for me) – only 90 minutes!

Before we took off, I cut a piece of Jane Parker fruitcake for Tim and me to take with us on today’s ride.  Mark definitely was not interested, which is quite fine – it leaves more of this scrumptious food for Tim and me.  In case you want to see what it looks like, check out this photo. 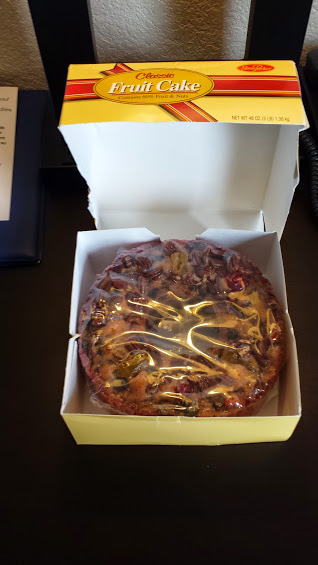 Photo of Jane Parker fruit cake. Tim and I will be enjoying a piece of this everyday of Leg 5 until there is none left. Don’t you wish you could have a piece of this? 🙂

We finally got going around 12 noon on the day’s ride to Conroe, TX.  It was 39 degrees outside, so it was definitely not warm, but we’ve had at least one colder day (Silver City, NM – 32 degrees).  The ride was 42 miles to Conroe and it was sunny out when we started, so we all figured it would warm up on the ride.  How wrong could we be?  It was pretty cold for most of the ride, especially after the sun hid behind the clouds, which happened about 10 miles into the ride.  It was cold enough that we didn’t actually stop anywhere for more than a few minutes, and the only thing I ate on the ride were 3 fig newtons that Tim gave all of us.

One of my few stops along Texas 105 was near a cattle ranch right on the road, where Texas Longhorn steer were munching in grass.  When I stopped, they all moved away from the fence by the road, and stood alongside one another so that I could get this group photo (I am not kidding!).  Wasn’t that nice of them? 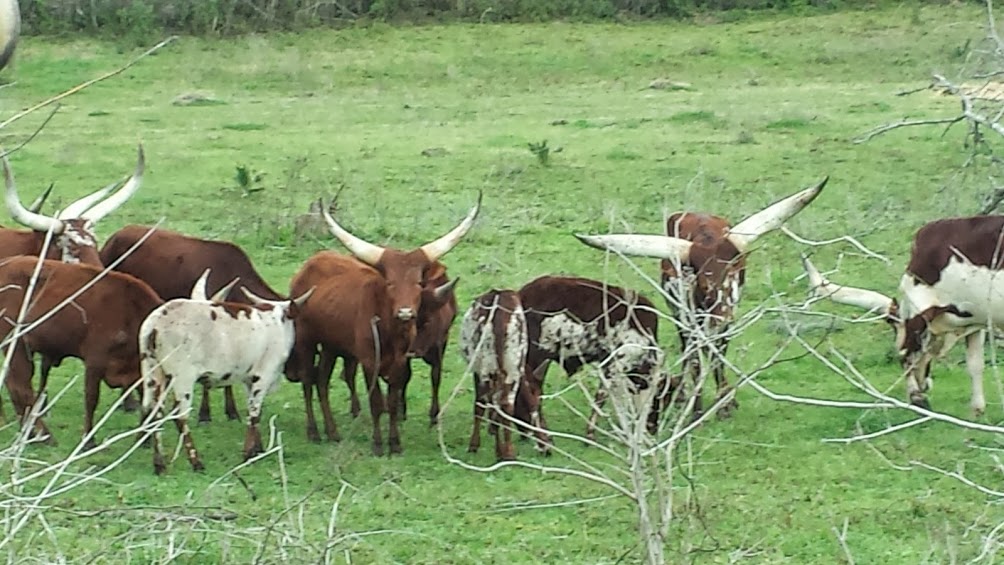 Texas Longhorn steer in ranch along Texas 105.  Those are some big horns!

We made it to our hotel in Conroe just before 3 p.m., so we averaged better than 15 mph in today’s ride.  But we are all really cold by the time we arrived and I couldn’t even feel my feet.  After we took our showers (although Mark took a hot bath to help get feeling back in his legs and feet), we retired to Beth’s room for snacks and beers.  Here’s a photo of Mark enjoying a post-ride Dos Equis! 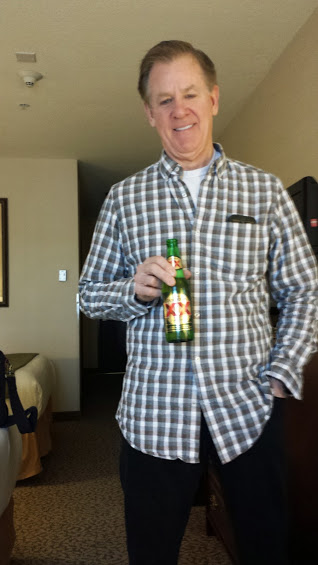 Since we didn’t really have lunch, after Tim and Beth worked out the route for tomorrow’s ride to Lumberton, TX, we walked across the parking lot to a Texas Roadhouse Restaurant for dinner.  We actually got there around 4:40 p.m. and were given a pager and told we’d have about a 10 minute wait for a table!  Before 5 p.m. – can you believe it!  So we took a booth in the bar and all had a real nice dinner, arriving back at our hotel by around 6 p.m. 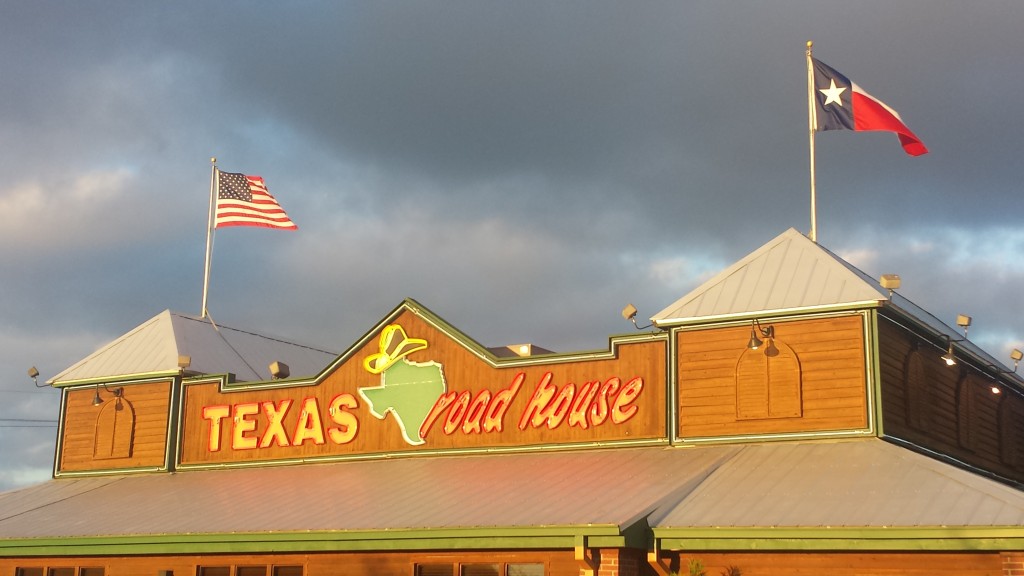 Texas Roadhouse Restaurant, Conroe, TX. I don’t think we’re going to see too many more Texas state flags, so I wanted to get this one in a photo for the blog.

Tomorrow’s ride to Lumberton, TX will be between 85 and 90 miles, and it is only supposed to be 29 degrees at 8 a.m. when we begin our ride.  So we’re all planning on dressing more warmly for tomorrow’s ride!