We met for breakfast at 7 a.m. and then had the car packed and were ready to go by 8 a.m.  We decided to use TX Farm Road 1023 to start out, instead of riding along US 90, which was four lanes and a bit “trafficy.” TX Farm Road 1023 was quite desolate, which was exactly why we used it.  Along the way we passed several cattle ranches, and at one of them the cattle were very active, which I was able to catch in this video.

After about 20 miles, we made it to Sabinal, TX and TX Ranch Road 187, where we stopped for a short break.  Here is a picture of Tim and Mark at that first rest stop. 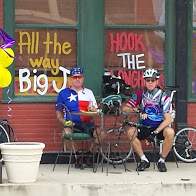 Mark and Tim at first rest stop of the day in Sabinal, TX.

While in Sabinal we met a man named Billy Riggs, a cattle rancher who was very friendly and talkative.  Here’s a picture of Tim with Bobby Riggs. 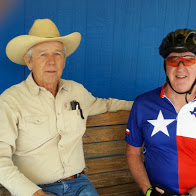 Billy Riggs is a cattle rancher who recently sold his cattle ranch to a company that is planning to frack for natural gas on his land.  Billy received five times what he paid for the ranch 20 years ago.  He used to money to buy another cattle ranch in Truth or Consequences, NM.  Billy is in his mid-seventies and commutes every week back and forth from his ranch in New Mexico to Sabinal. We told him he looked fit enough to join us on the ride and he told us he knew he could do the ride, but he didn’t want to – he’d prefer to ride along with us on his horse, and I’m pretty sure he could easily have kept up with us today doing that.

We rode 80 miles today, more than half of it with a stiff headwind, and when we finally turned away from the wind, we had to deal with the hills of Texas Hill Country, so it took us slightly more than 8 hours to complete the ride today.  Here are a few pictures I took along the ride. You’ll have to excuse me for not taking too many photos today – I concentrated on just finishing it! 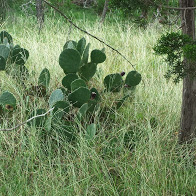 Prickly pear cactus on Farm Road 470 at one of our last rest stops of the day. You didn’t really think I wasn’t going to post some pictures of cactus plants, did you? 🙂 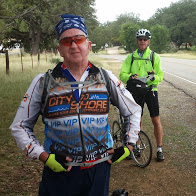 Tim and Mark at one of our last rest stops on TX Famr Road 470.

Just after 4 p.m. we finally made it to the Diamond H Bed and Breakfast outside of Bandera, TX.  Here are a few pictures I took of our lodging place for the evening. 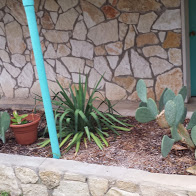 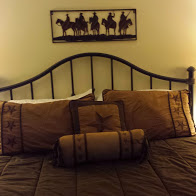 We have another long day tomorrow – it’s at least 70 miles or so to Blanco, TX.