Day 5: Down to the Bottom

We all had breakfast at Johnny B’s, a cute retro greasy spoon next to the hotel. The TV in the corner had the Today show on, with its dumb stories about how you’re allowed to eat food past the expiration date and how Miley Cyrus had teased Matt Lauer about his sex life. It seemed incongruous to me that this part of Texas would be exposed to the same cultural junk as the rest of America, because it kind of does feel like a different country here. TV in west Texas should only have stations with shows about ranchers and trucks and Mexicans, at least while I’m visiting. And all the good John Wayne movies plus Touch of Evil should be running on a loop. 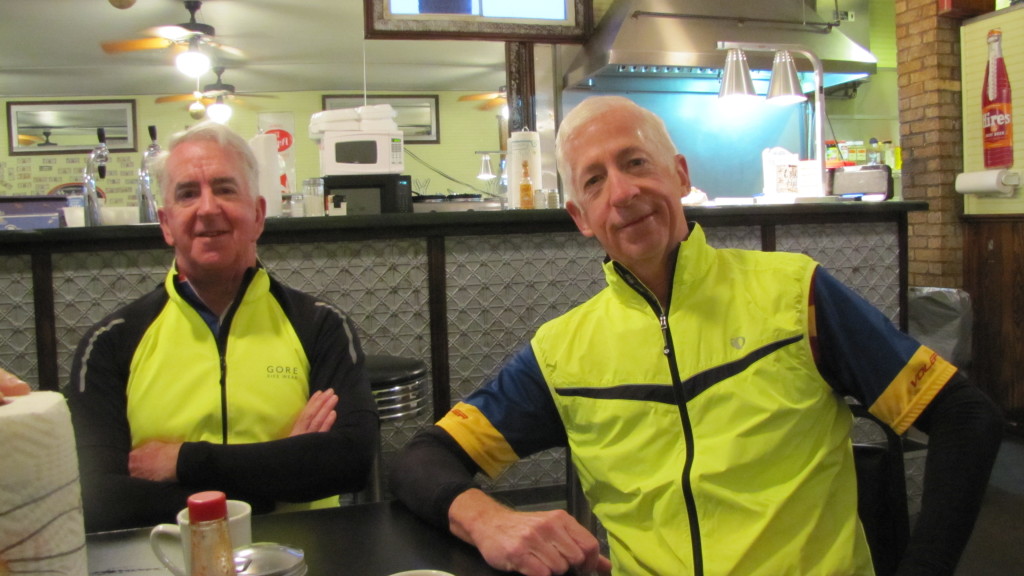 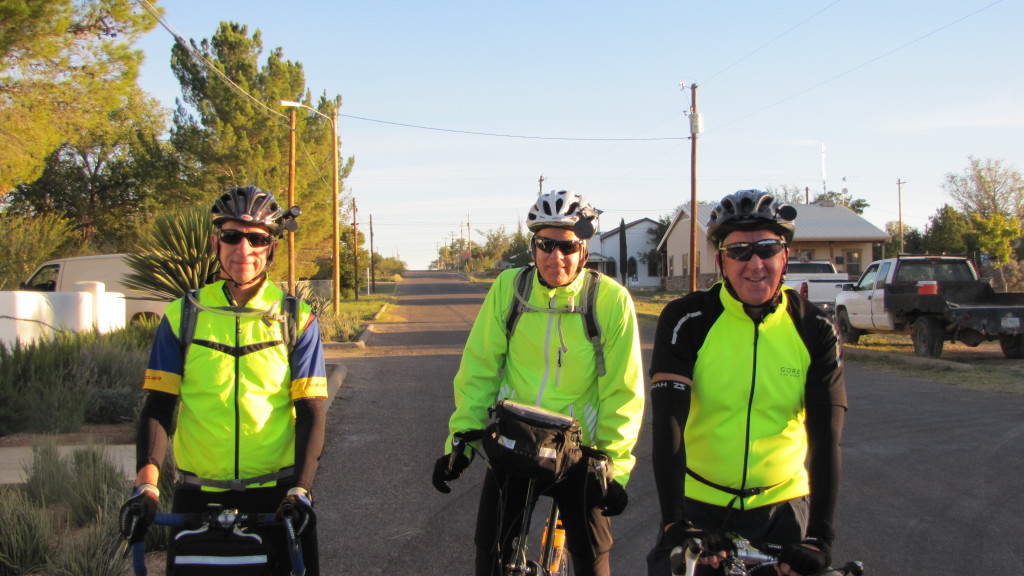 I feel obligated to post these pre-ride photos even though they all look pretty much the same. You guys need to start mixing it up a little with different expressions or poses.

I really (really) didn’t want to leave the Gage Hotel, especially knowing that the Outback Oasis in Sanderson, self-proclaimed Cactus Capital of Texas, was our next stop.

I contemplated getting an expensive massage, but that would have been rubbing it in too much. So I picked out an overstuffed chair in the lobby next to the fireplace and caught up with work for a few hours. 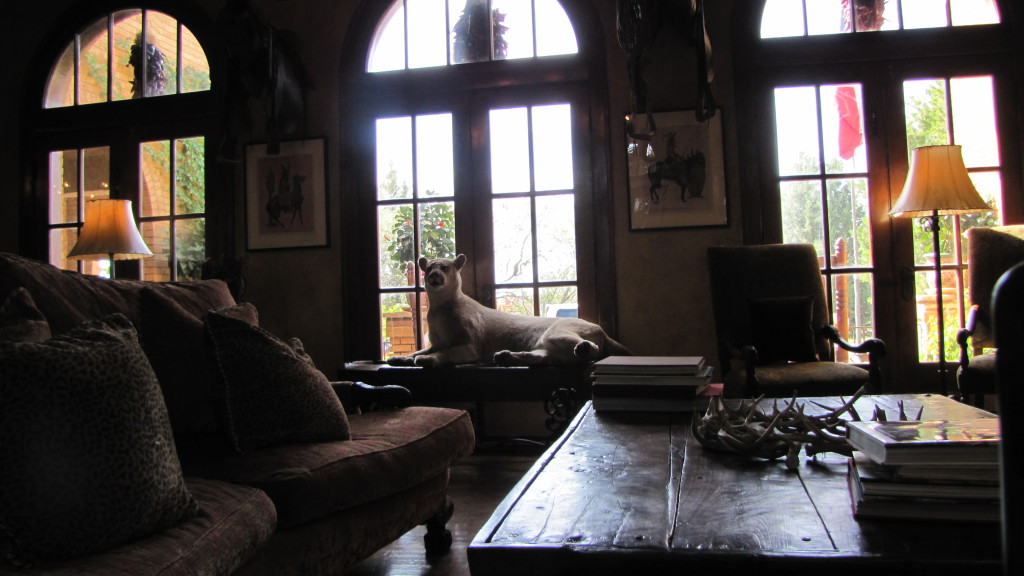 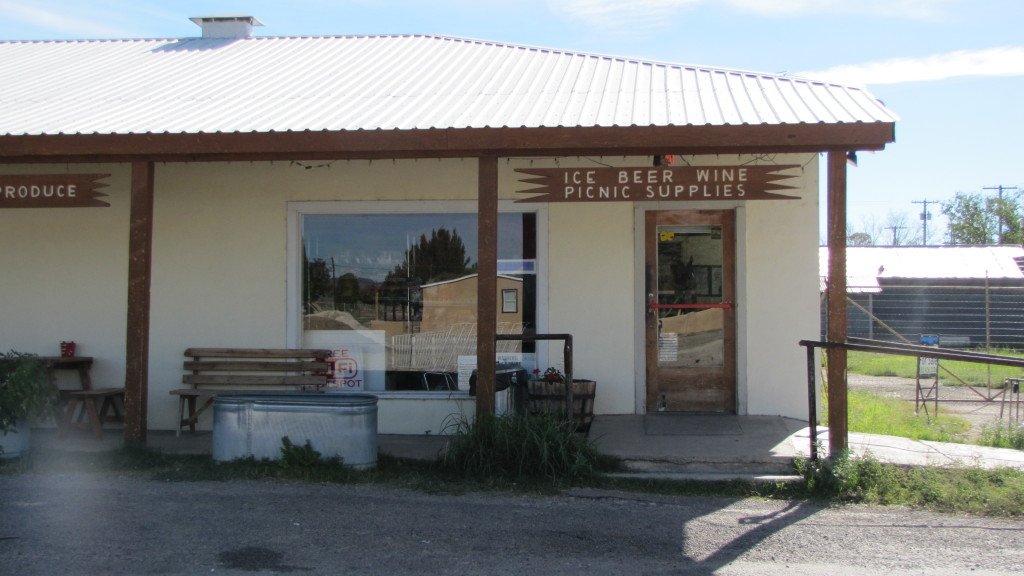 The dudes wanted to add 30 miles to their total today so that they wouldn’t have a crazy-long ride on Wednesday. I picked them up at a picnic area on highway 90 and reluctantly trucked them back to the Outback Oasis.

It’s a charming motel on the outside, and the owners seem like very nice people. The reviews online all say things along the lines of, “It’s nothing special, but it’s clean.” But it actually wasn’t clean. There was a piece of tortilla chip on my comforter, confirming my fear that comforters rarely get washed (which I usually just try not to think about because ugh). The grimy bathroom floor was one big ant party, with a conga line (credit Mark for the phrase) starting in the shower. The crappy mattress creaked with every small move and the stained barcalounger had no springs left. In the span of a few hours we’d gone from first to worst in Brothers’ Bike Ride accommodations. 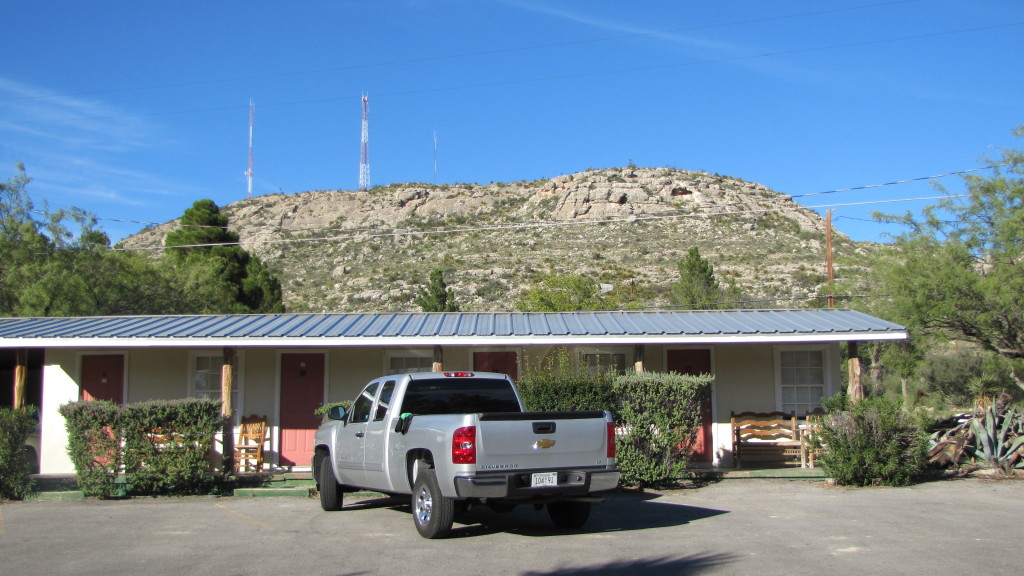 Silver had no complaints 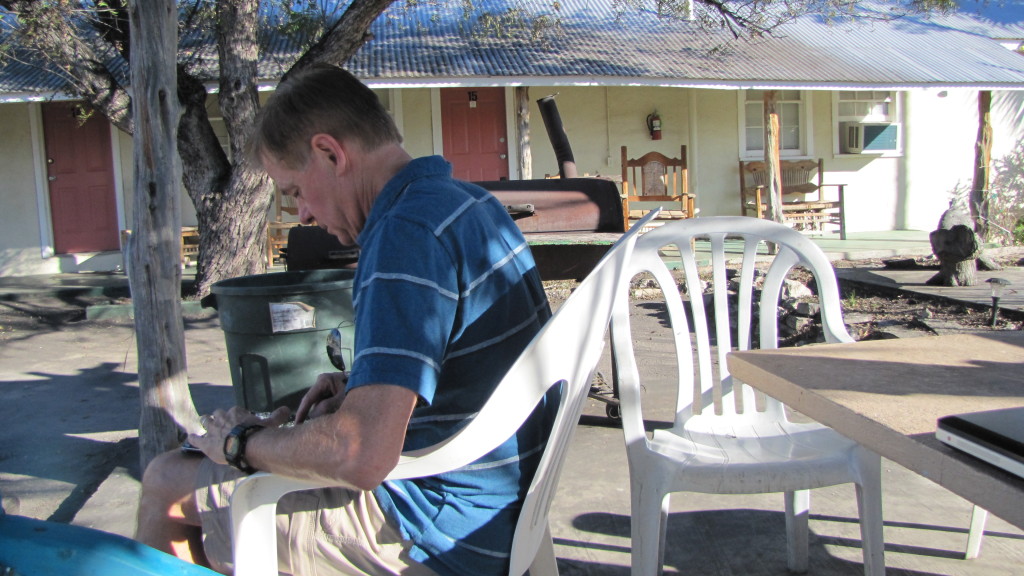 The internet worked outside, at least

For dinner we alighted on the Eagle’s Nest, which seemed to be the only open establishment. The woman who waited on and cooked for us and who probably owned the place told us about how Sanderson (population 837) was hurt when the train switching stations moved from there to Alpine. It’d be interesting to see what Sanderson is like in 50 years, if it still exists. I had chicken tenders (my go-to meal when I don’t know whether to a trust a place), and the guys had burgers, all with tater tots on the side. The food was fine. The brothers reminisced about family trips they took when they were kids and I ate it all up. 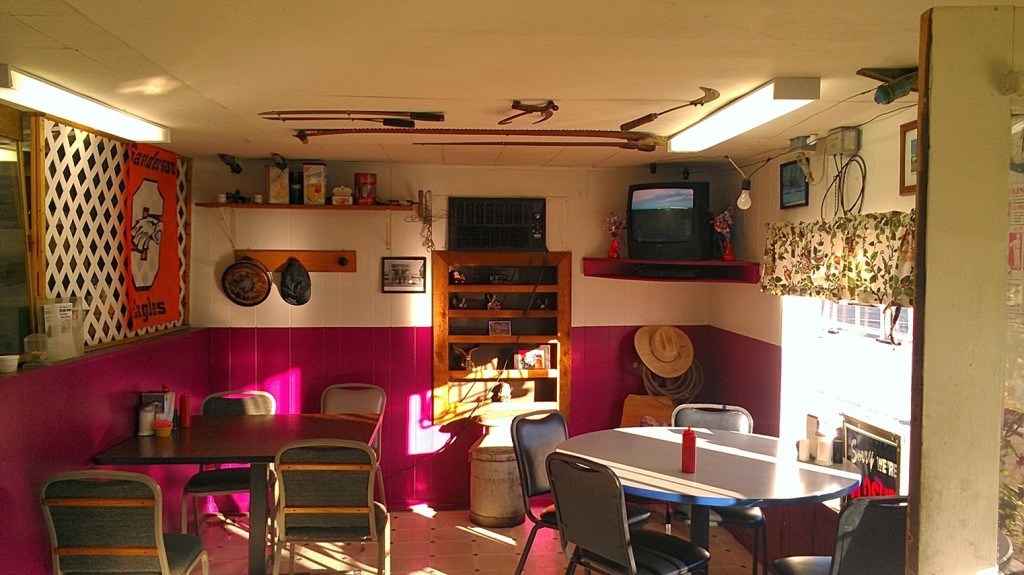 It’s hard not to like a place that embraces fuscia 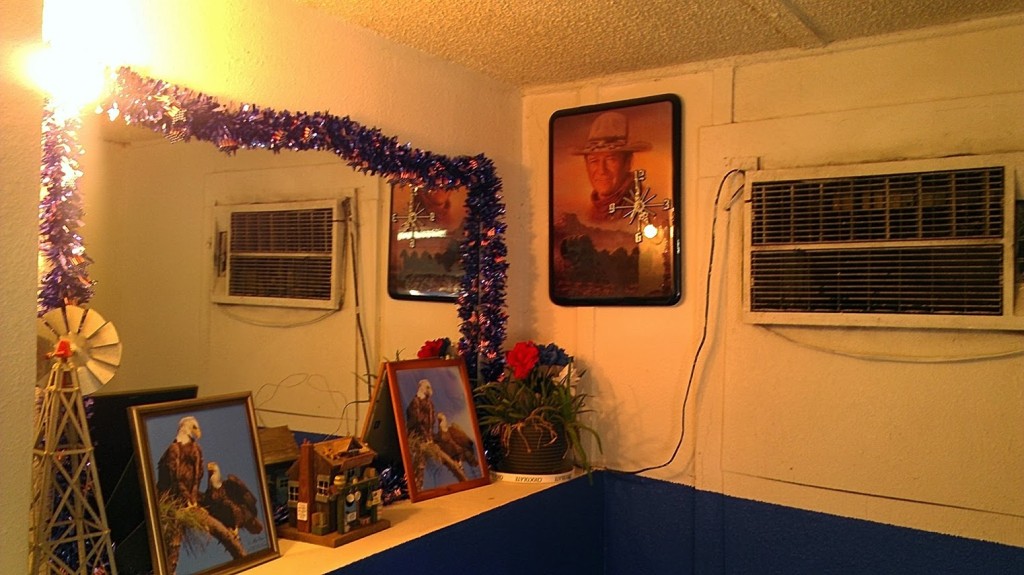 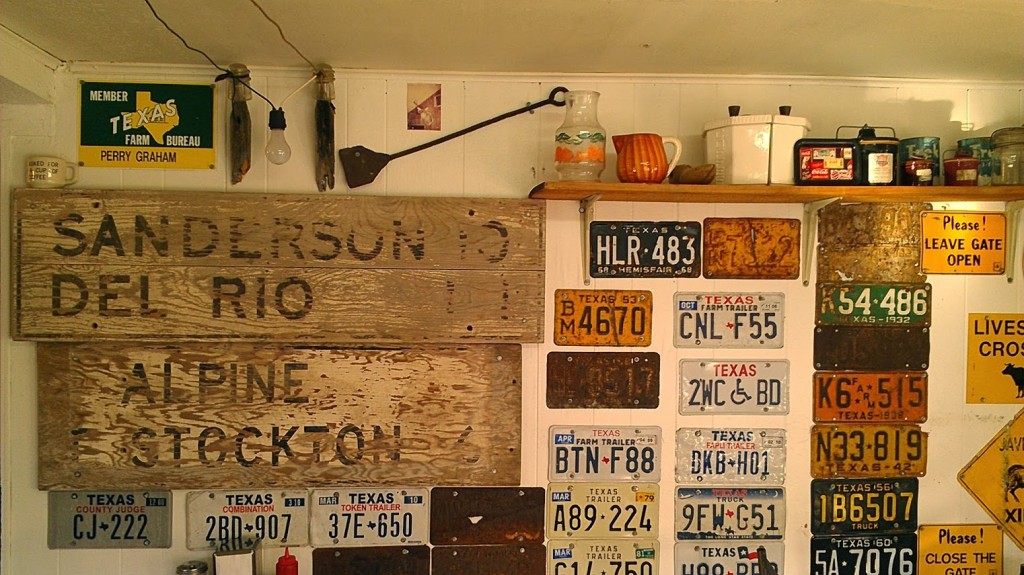 Back at the motel, I really tried to sleep, but I was skeeved out for various reasons. There were no curtains, just blinds, and I realized that I could easily be seen through the window if I slept too far over on the right side of the bed. I kept thinking I heard subtle movements just outside my door, but when I got up to look, nothing was there. The ants continued to party, and I pictured them conga-ing right up onto my arms and legs.

I finished one book and read five chapters of another. Some time after 1 a.m. I finally conked out. 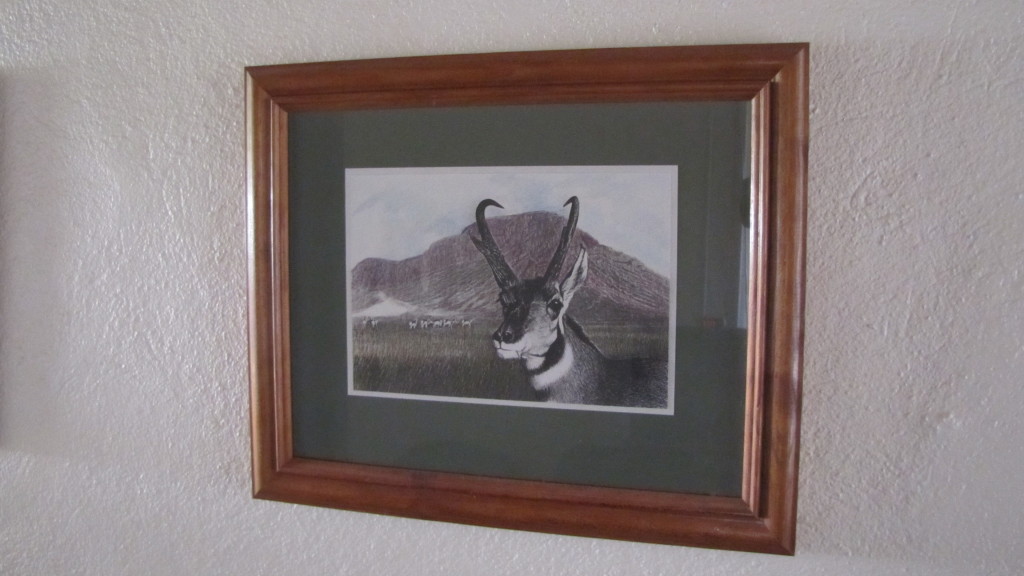 6/10. There were three related pencil drawings in my room and I enjoyed all of them. They appear to be originals and were done by someone with some amount of talent. I chose this one because the antelope seems to be photobombing the mountainscape and it amused me. The color feels like an afterthought, though; it almost seems like a kid went in and colored someone’s illustration. It would be more successful if it were black and white.