Posted by Chris on August 18, 2016
Posted in: Uncategorized. Leave a Comment

Since I had announced that I was going to go to bed no later than 9:00 p.m., I let Tim talk us into meeting for breakfast at 7:00 a.m. I guess I was too tired to fight?

It was a mistake.

First, at breakfast, I just couldn’t eat the amount of food I wanted to eat. I just couldn’t force it down. I felt like I had had enough coffee – it was delicious – but I guess no amount of coffee is enough for a 6:45 a.m. wake-up call. Coming out of Odense (by the way, I didn’t get to show the guys ANY of the city and I feel bad about that), I was yawning non-stop. My legs felt fine, my knees felt fine, but – especially after our first rest break – I kept scouting the shoulder of the road for a nice place to take a nap.

I was able to talk the guys into spending some time in Faaborg – I’m not sure if I spelled it out, but I figured we might as well since otherwise we’d probably just be waiting for the ferry. Coming into Faaborg, there was a long downhill that felt great. We got a lot of speed and it must have lasted over a kilometer. I’d hate to have had to climb that!

As we were walking into the center of town, a fellow cyclist named Jess commented on the Bike Friday and we got to talking about his annual ride to Paris. It turns out that his wife’s cousin lives in Quakertown and he’s spent some time in Pennsylvania. Small world!

I absolutely needed a cup of coffee and got one at Cafe No. 2 in the middle of town. I also treated myself to some delicious pancakes since my breakfast had been a bit on the light side. If we were doing the Souther Tier, I’d be totally on board with the ‘nothing but cereal bars / make yourself a sandwich for lunch from the breakfast tray’ habit, but in Denmark, there are towns in between our stops that offer actual food options. I don’t know – a cereal bar is nice when you’re in the middle of nowhere (and we have been in the middle of nowhere from time to time), but I can’t do it day in and day out when it’s not necessary. For a ride like this, I need real food.

Back when I lived in Greenpoint, I would occasionally ride to Nyack on Sunday mornings with a coworker named Mensur. There was one morning when I was running late and just stuffed a bunch of powdered mini donuts in my mouth before heading out. I’m sure you can guess the end of the story, but I totally crashed a few miles before we got into town. We stopped at a cafe frequented by bikers and I got myself the largest meal they had. Mensur warned me not to and said I was going to throw up. I scarfed it down and led the whole way back. Food is fuel, folks.

Anyways, we left town with plenty of time to get to Boejden for our ferry. We took the noon ferry and I had my daily hotdog while making our way from the island of Fyn to the island of Als.

Compared to yesterday, today felt like a rest day. Once we arrived in Als, we only had 18 km to go. I saw no need to rush since it wasn’t even 1:00 p.m. and there was no way our room would be ready, so I just sat back, let myself get dropped and reminisced about the time Antje and I spent biking around Als in 2004 just a couple of months after we started dating.

We made it to our bed and breakfast before 2:00 p.m. The proprietor seems to be one of the handful of Danes whose English is not better than my Danish, so I ended up using more Danish today than I probably ever have in my life. Anyway, she commented on how fast we arrived – that’ll happen if you’re leaving around 7:45 a.m.!

Once we got to our rooms, I really just relaxed – washed my biking clothes in the sink, let them dry out on the porch, took a nice long shower and followed with a nap while the guys had a beer in town.

My dad and Tim had agreed to meet for dinner at 5:30 p.m. I hadn’t known this, but I ended up knocking on my dad’s door at that time to see if he had come back yet. He was totally out of it when I woke him up and asked me to repeat what I had said when I apologized for waking him up. He told me the dinner plan and asked me what time it was. I erroneously told him it was 5:00 and went back to my room when Tim came down and immediately knocked on his door. I felt bad about giving him a non-existent half hour, but at least I let him sleep for the maximum amount of time.

For dinner, we all had burgers – my body’s just been craving steak and burgers since we started this trip. I’m going to have to try to eat something like pasta tomorrow to carb up for our last leg. 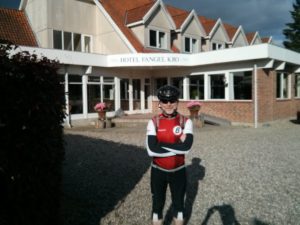 Google Maps took us through Fangel – where Beth and I stayed (“in Odense” hah!) back in 2001. Fun times were had in this hotel. 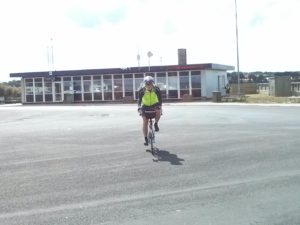 Tim approaching the ferry to Als. 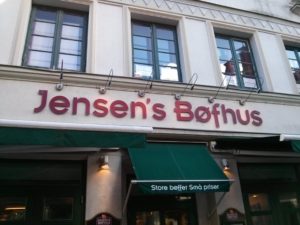 Where we got out dinner. Store bøffer Små priser 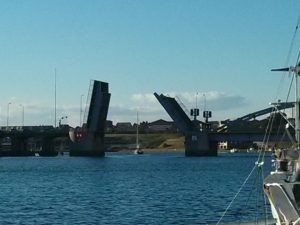 The bridge to Dybboel on the mainland peninsula of Jutland. 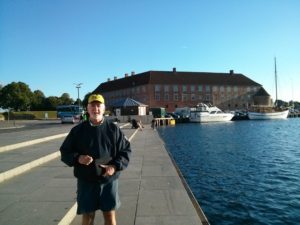 Tim in front of Soenderborg Castle 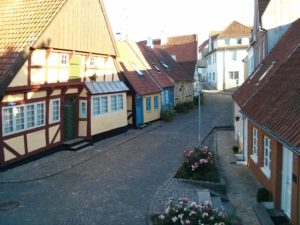