Posted by Chris on August 18, 2016
Posted in: Uncategorized. 1 comment

Dad had been relegated to the alcove of our room in Roskilde so Tim and I could get some sleep. I didn’t hear a peep from my dad’s section of the room, but I again had trouble falling asleep. Tim’s snoring was minimal – more like occasional pseudo-snoring sounds. Quite a change of pace from the previous night. But it was hot in the room and I just didn’t feel ready for bed at 10:00 p.m.

Breakfast was crazy – I think our hotel was filled with a tour bus from China. Tim went down first (he was dressed before either my dad and I were up) and had to fight to get a spot and people kept cutting in front of him in the coffee line. When dad and I finally came down, it had died down a lot, but it was still pretty hectic. They were lacking a few things you’d expect, like cheese, but they had these great mini croissants, so I ended up having three of them.

The weather couldn’t have been better and my legs felt great. I spent a lot of time out front throughout the day (except for the end… we’ll get to that). We also finally saw our first horse on the bike paths – this was something I had been waiting for throughout the trip because the bike paths between cities here are just filled with horse poop. I kept thinking to myself: all this horse poop and no horses? Anyways, after passing a group of high school students on a bike excursion, my dad swerved – it looked like to avoid something – like horse poop, for example. Instead, it turned out he had a flat. Changing his tube was a group effort, with me doing the least amount of work. It took a while, but I once we were up and running again, we just took off. I felt so good, I was singing to myself. My dad and I were up in the front when he asked if I had seen Tim. I thought I had seen him in my rearview mirror, but just as he asked, I couldn’t see him at all. So we stopped and he walked back about a 150 yards and met up with him. I eventually rode back to discover that Tim also had a flat and had yelled to me to hold up. I guess I had been singing to myself too loudly to have heard it. 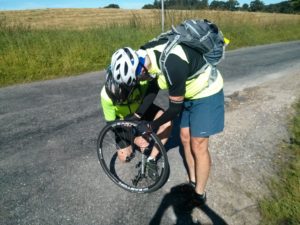 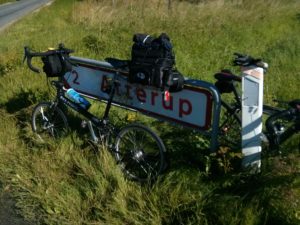 Where we stopped to change dad’s tire. He couldn’t have picked a better place to get a flat. 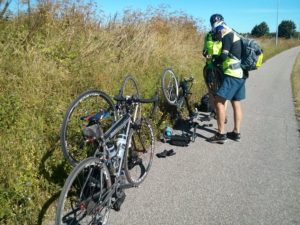 Afterwards, we tried to stop a little less to make up for lost time – it was our third longest leg of about 70 miles. We rode into Slagelse – one of the few cities in Denmark that was on my list of towns to see (and just about the only one I haven’t seen before), but Tim let it be known that he preferred to avoid cities altogether. Still, we saw the main square and a group of some 20 people on horseback (they looked like part of a riding group or perhaps even police). The town looked far smaller than I had imagined, so it didn’t matter that we really didn’t stop at all.

We continued on to Koersor – where the bridge (and train tunnel) over (and under) the Store Baelt / Great Belt is located. I made the guys stop at a grocery store because I was out of water. We continued on another 3 km to the train station, got tickets and made our way to the tracks. I wasn’t sure that the train to Esbjerg was going to stop in Nyborg across the belt, so I went back to the shop in the train station to make sure. I also got my daily hotdog there (wrapped in bacon!). I was told that all trains that stopped in Koersor were local and so we only had to wait a few minutes to catch a train.

The ride in Fyn continued to be easy, but it was a hot day and I had run out of water again. My dad apparently had a hole in his backpack’s water reservoir, so he was out as well. We stopped at a bakery roughly 15 km outside of Odense around 4:00 p.m. There, we bought a bunch of water, cola and snacked a little. I was still feeling great.

But once we remounted our bikes, my right knee started aching. Around 4 km outside of Odense, I couldn’t even bend it – it could be bent, I just couldn’t make the motion of bending. I spent a good 2 km trying to pedal solely with my left leg and another 2 km in a super low gear, which just wasn’t helping. We stopped and even adjusted my seat a little – still no relief.

We eventually made it to our hotel – a Best Western (and probably the nicest Best Western in existence) – around 5:00 p.m. The guys took the stairs up to the rooms while I took the elevator.

Ever since it rained on the first day, I had been having trouble charging my phone. Our room suffered from a lack of outlets and I had to get on my hands and knees to try to get my phone to charge. While doing this, my knee POPPED. It was very audible and I felt like my whole upper body had dropped by a centimeter. When I stood back up, the pain was gone. My knee was fine. I can’t tell you how relieved I was.

The guys had already started drinking when I got the restaurant – again, attached to our hotel (I took the stairs down!). This was a NICE restaurant, e.g., our starter course was spinach-stuffed tortellini with caviar. We kept noticing that luxury cars kept pulling into the parking lot. I had three large beers with my meal and after such a long day, was starting to doze off while finishing up. When we went back up, I borrowed Tim’s charger to see if I could get that to work with my phone (it did), then tried my charger on his Bluetooth keyboard (it didn’t work) and then went to the hotel’s reception to ask if they had a charger from their lost and found I could have (they had a box of about 30). Charging problem solved.

I fell asleep around 8:45 and slept until dad woke me up around 2:00 a.m. I was wide awake for about an hour and dad started to do a much toned-down version of the propeller snoring from the other night. I listened and laughed a little and just let him do it for an hour until I felt like I was tired enough to fall back asleep. Then I took my mom’s advice and said “You’re snoring” (I didn’t preface it with “babe,” by the way) and he stopped. Silence for the rest of the night. Well done, mom, well done. I asked him about it today and he has no recollection of waking up or anything.