Day 3: Into the Groove

I came into this trip with a very low opinion of Florida. Despite wishing unrelentingly that I could go to or live at Disney World from the ages of eight through thirteen, I currently find no romance in this state. It doesn’t have the otherworldliness of Arizona and New Mexico, the expansiveness of Texas, the Southern Gothic mythos of Mississippi. Florida, in my preconception, is old, sterile, corrupt, trashy, pastel, sad. It has some positives, sure — it’s the birthplace of Tom Petty, home to some interesting architecture, site of preseason baseball — but otherwise it’s a big, funny shape of wasteland.

I’m wrong, of course. How could it be mostly bad? (How could almost anything?) As a surgically modified but wise (I guess?) woman once said, “Beauty’s where you find it.”

On Sunday I found it out the window in the hotel hallway. Some of my favorite travel photos have been taken from hotel hallways, and I think such a project would make for a good coffee table book. Hotel Hallways: Windows to the Unexamined American Landscape would be the title, probably. Here’s what I’m talking about: 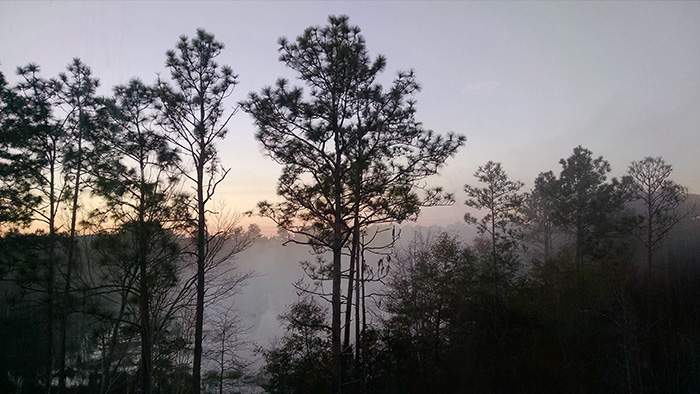 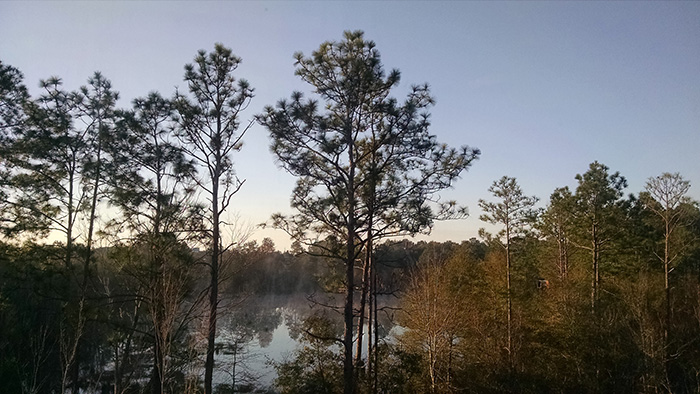 Prettiest view of the day.

Second prettiest was the full team getting back on the road: 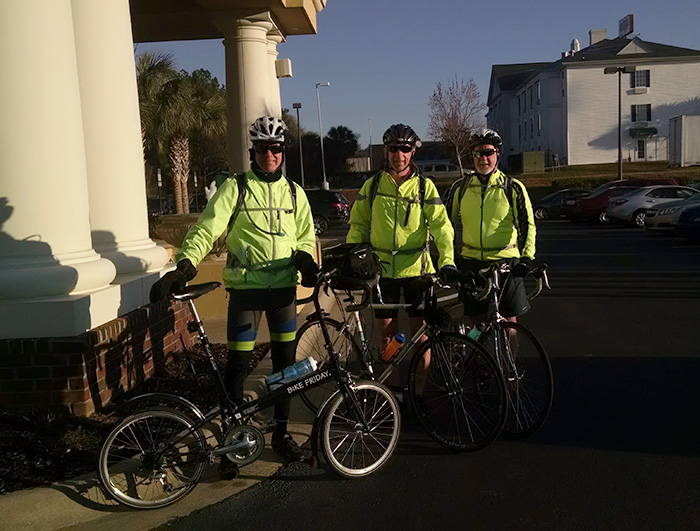 Dad felt ready to ride, and so the men headed out for what might end up being their longest day of the leg, at over 90 miles.

Likewise, it was my first substantial drive of the trip. The journey is the thing, and I looked forward to getting back on the road for some soul-purifying solo time. It was a gorgeous day, warm and springlike. Onyx and I were pumped to be traveling together.

Given my anti-Florida bias, I wasn’t expecting its roads to be so lovely, to have such good foliage. It’s a little jarring, actually, to pass from beautiful roadways into dumpy towns and cities. If they can make this highway nice, why can’t they make everything else nice, too? It’s complicated, I get it. It just feels like a fakeout. 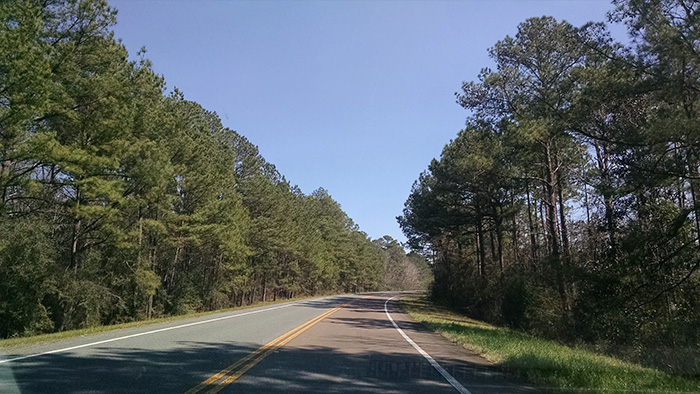 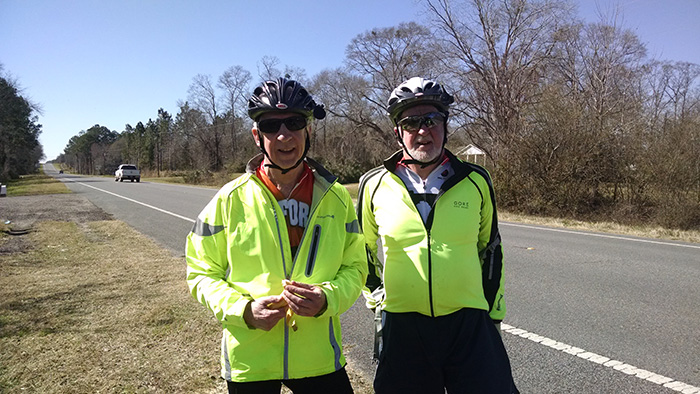 Brian and Tim during my pit stop along Route 90

Marianna is, or sure seems like, a dumpy town. We’ve passed through many a dump in our travels, but now that we’re in the east, the exoticism is gone. We’re from the east. We already know what everything is like here: slightly congested, slightly ugly, usually. There’s variation, sure, but it no longer feels like there’s anything new to discover. Surprise me, Florida.

Still, I landed at the hotel in a good mood. The trip was happening! My dad was okay! We were all doing this, this very last ride, together. 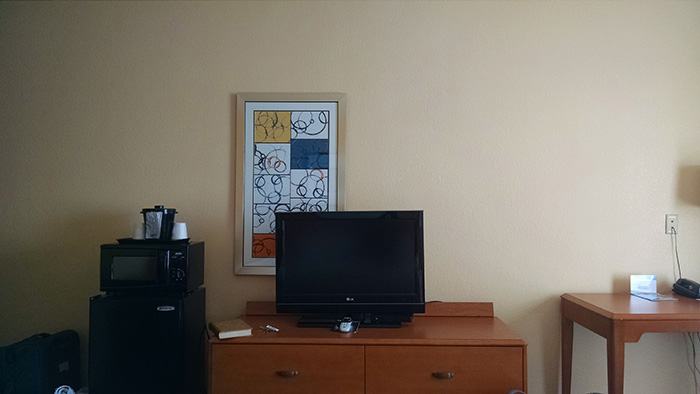 Hey, so where should we hang this? There aren’t many options… I guess behind the TV? 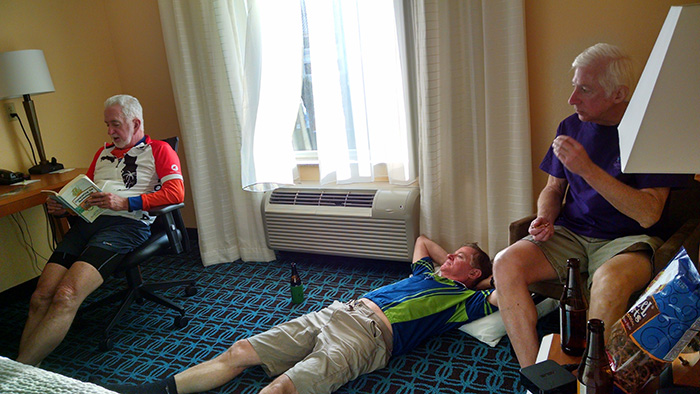 Chillin’ with my homies

We enjoyed a quick and hearty dinner at a local pub chain called Beef O’Brady’s. Afterward Tim (who was especially beat that day from being the pacer) and Mark retired, and Dad hung out to blog and half-watch the Oscars red carpet festivities. Then he went to bed and I stayed up for as long as I could. It was the first time in a while that I didn’t watch the entire broadcast. I was in Central time and still couldn’t handle it. So it goes in sleepy L6. 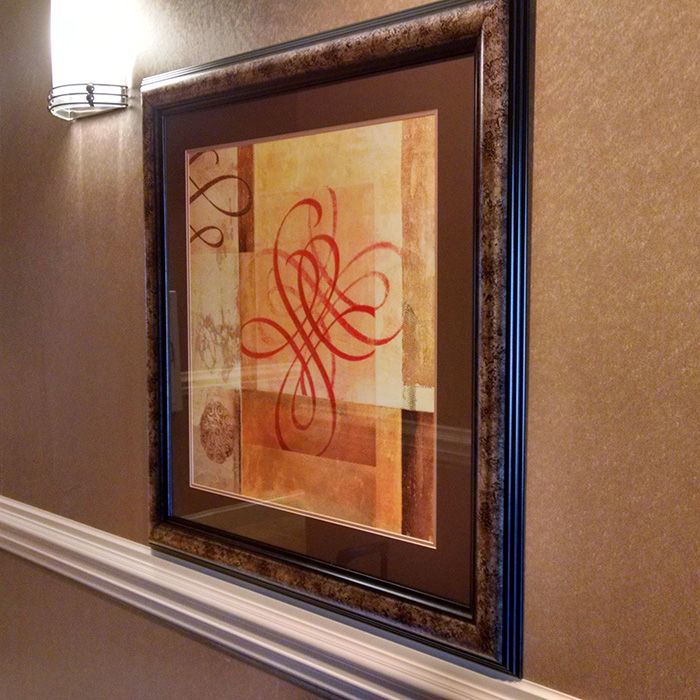