Days 0 and 1: You Can Still Change Your Mind

For who knows what reason — work stress, old age, the presidential election — I’ve been having trouble sleeping for the past few weeks. On Thursday I woke up at 4:15, tallying five hours, and that was that. People’s bodies can get accustomed to lack of sleep, I know, but I don’t think it’s good for any of us. Eight hours or bust is what I always say!

During breakfast the Hampton Inn lounge played generic light pop and CNN at the same volume in a subtle commentary on media oversaturation. I read the Wall Street Journal, a paper I generally enjoy when I run across it, and have just now spent about ten minutes reading conflicting reports of its political bias. I detected no bias. Its crossword was fairly challenging, and by that I mean I haven’t finished it yet.

I hung out with my laptop till the guys arrived, then we headed for the Gulf Breeze Motel on Dauphin Island, speculating about the fates of Downton Abbey characters during the drive. Dauphin Island is a quiet coastal town; it reminded me a little of Chincoteague, minus the cutesy antique stores and coffee shops. For a chilly weekday in February the motel was surprisingly booked. 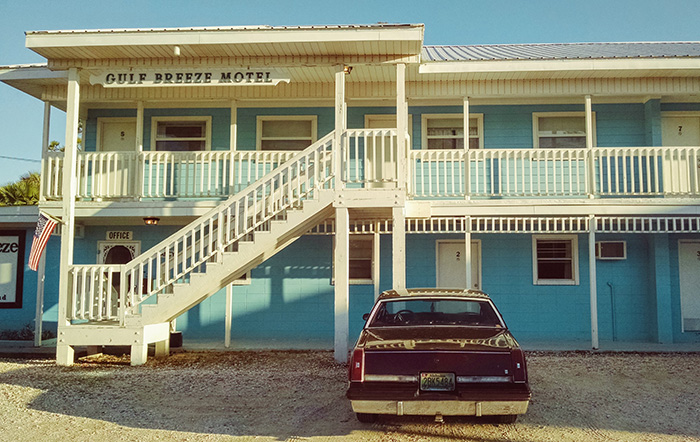 The guys got to work putting their bikes together while I ran out to a gas station for beer. By the time I got back twenty minutes later, Mark was all done and Tim was close to finished, but Brian was engaged in his standard bike-building struggle. 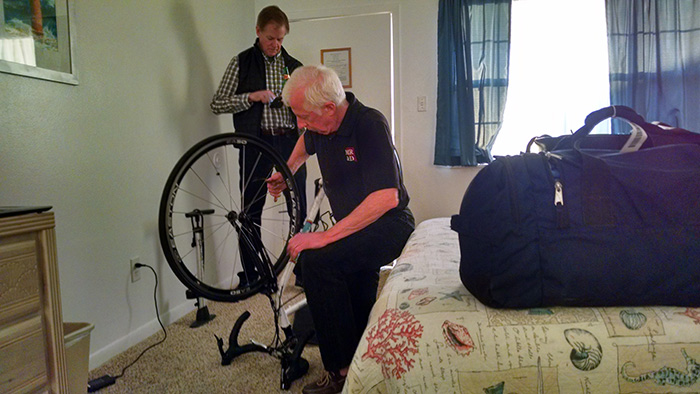 We were all a little worried about my dad. He’d been sick for three weeks with a terrible cough that kept him from sleeping and thus getting better. He hadn’t exercised in a long time and had barely trained for the ride during the winter. He’d worked himself ragged and had reached a point where he didn’t even care whether he rode. At the motel he became increasingly frustrated with his bike, and eventually Mark offered to finish putting it together for him after we ate.

Dinner was at JT’s Sunset Grill, a modest family place with views of the water. I watched the sun set as Tim tried to slice a fried green tomato with a plastic knife (“Don’t fight it,” I told him). Our meals — delicious fresh fish, seasoned perfectly — were terrific. We talked through plans for the next day. It felt good to have the band back together. 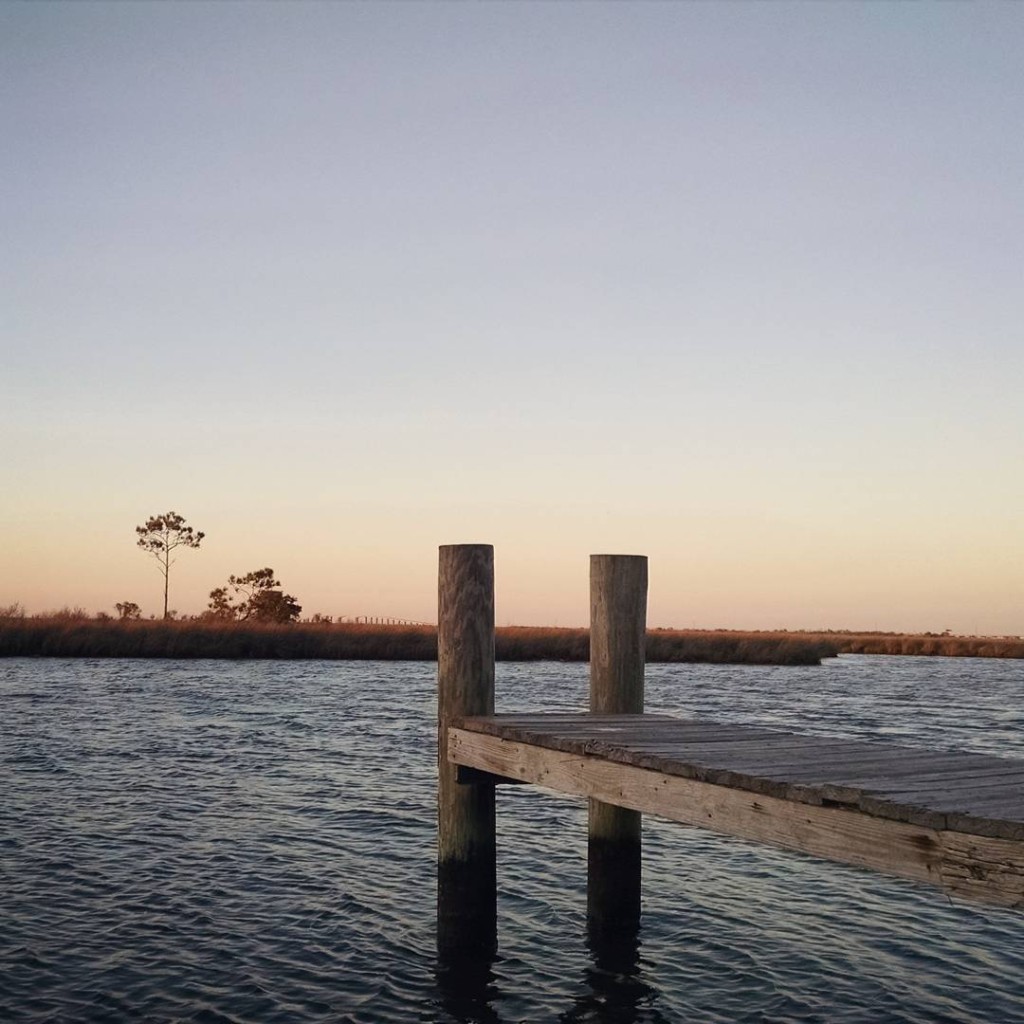 My mattress in the Gulf Breeze Motel was wonderfully firm and granted me seven decent hours of rest. Things had not gone as well for my dad, who was up most of the night coughing and worrying. “You don’t have to do this,” I said. But he needed to prove to himself that he could. So he headed out with his brothers, and I promised to rescue him if he needed it. 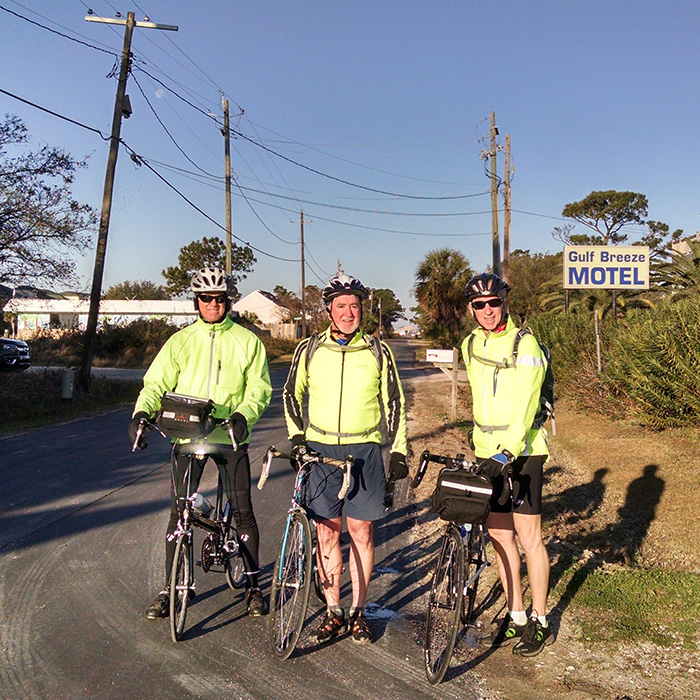 First day of the last ride

I just wouldn’t be able to rescue him between the hours of 11 and 1, because I’d booked a massage in Pensacola.

My massage therapist was a mild-looking man in his twenties, tall, black, with glasses. Was he cute, Beth? He was cute. But he seemed uncomfortable with the idea of saying words; he was nervous and overly formal, and I diagnosed him as feeling like he couldn’t be his real self at work. I wanted to ask him questions — “How long have you been doing this? Does it ever get boring? Does this music (it was distractingly bad) drive you crazy? Do people ever proposition you?” — but based on his distant responses to my initial attempts at small talk, I sensed any conversation would just make him feel more awkward. Maybe he went into this line of work in order to speak as little as possible.

I’d asked him to focus on my perpetually aching shoulders. He did, and I was grateful; sometimes massage therapists just run mindlessly through their routine. As part of this he asked me if I’d ever heard of Biofreeze. I had not. It sounded futuristically dangerous. He haltingly explained what it is — a menthol-based “cold therapy” gel — and offered to use it on my shoulders. All massage-related decisions need to be made before the massage begins, because you’re in no place, mid-massage, to have rational thoughts about anything. I felt myself tense up at having to make a choice while face down on a table, searching my mental Google for “Biofreeze death.” To stall for time I asked him if Biofreeze was an extra charge. It was not. In the end I agreed. Biofreeze was applied. For a few seconds my shoulders felt like they were on fire, and after the sensation passed they felt the same as before, but I have no regrets.

Despite the social weirdness, despite Biofreeze, it was a great and much-needed massage, and I left feeling relaxed and happy — especially after I checked my phone and saw a message from Dad saying he was doing okay.

As I was paying, a potbellied mailman entered and said to me in a deep southern accent, “Excuse me, ma’am, does this shirt make me look fat?”

I looked at his shirt, which barely reached the bottom of his gut. It had black smudges on it.

“It’s your fat that makes you look fat,” I thought. He would have liked it if I’d said that, I think, but my impulse to be polite is too strong. “No,” I said.

“Well, she’s a good liar, I can tell you that,” he said to the receptionist.

“He does this every time,” she told me.

Soon after I settled into the hotel the bikers arrived. My dad had gone though some tough moments, but he’d made it to Pensacola in one piece. We dined at the nearby McGuire’s Irish Pub, which had a comforting Towne House (R.I.P.) vibe, and enjoyed more delicious fish. 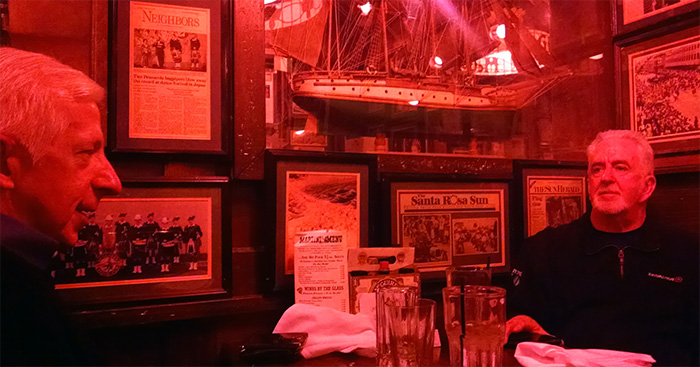 Hotel Art of the Day will return tomorrow. In the meantime I invite you to: 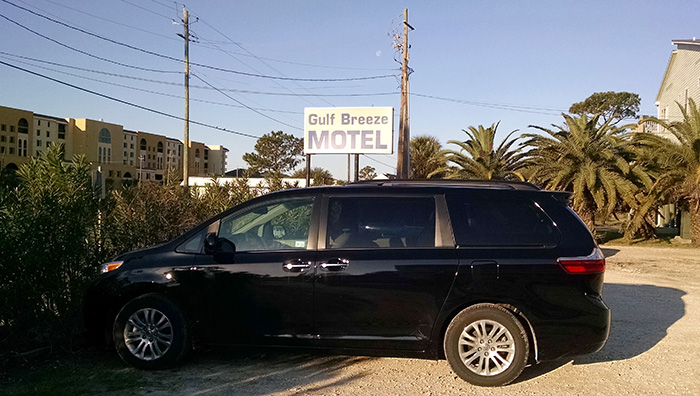