Posted by Brian on February 27, 2016
Posted in: Brian. Leave a Comment

On the last part of Friday’s ride, we passed Blue Angel Parkway, which leads into Naval Air Station Pensacola, the home of the National Naval Aviation Museum.  We did not detour to visit it on Friday, but after reading Marcia and Nancy’s comments about how they could not believe Sullivan boys could possibly pass up a museum, I felt I just had to go back and visit it!  Plus my friend Brian Zuchowski from Palmdale highly recommended it to me, so instead of riding today, I decided to take the day off and go to the museum.  I felt rested enough to ride (I had the best night’s sleep in about a month on Friday!), but really wanted to go to the aviation museum, which I had never visited.

I arrived a few minutes after 9 a.m., shortly after it opened, and spent about 2 hours there, which was just about enough time for what I wanted to see – mainly the WWII aircraft.  I hope you like looking at planes, because that’s what most of my blog will be. 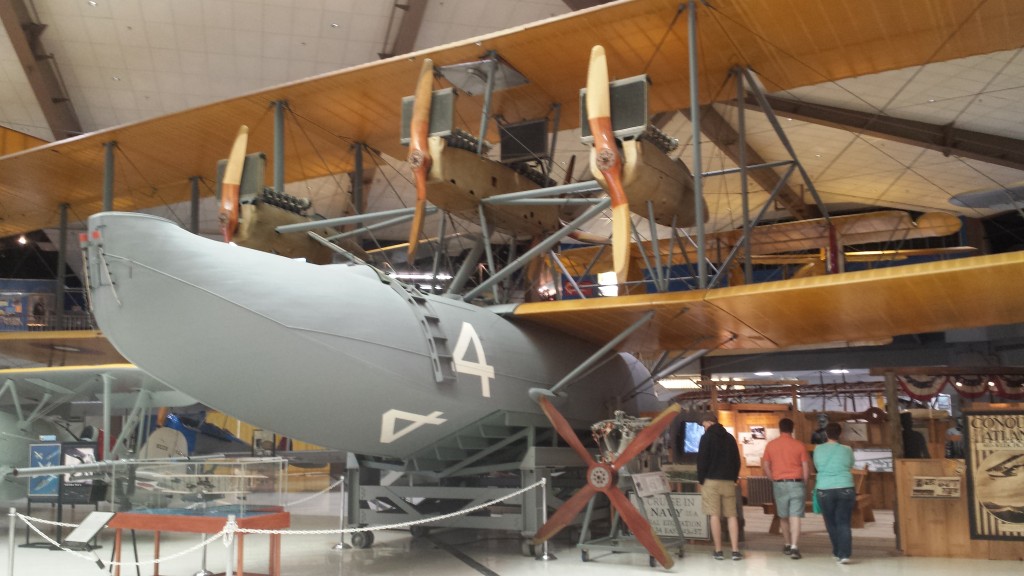 Curtiss NC-4 WWI antisubmarine aircraft. The size of this WWI plane was really impressive, and also the mass of the three engines, each of which needed radiators to stay cool. 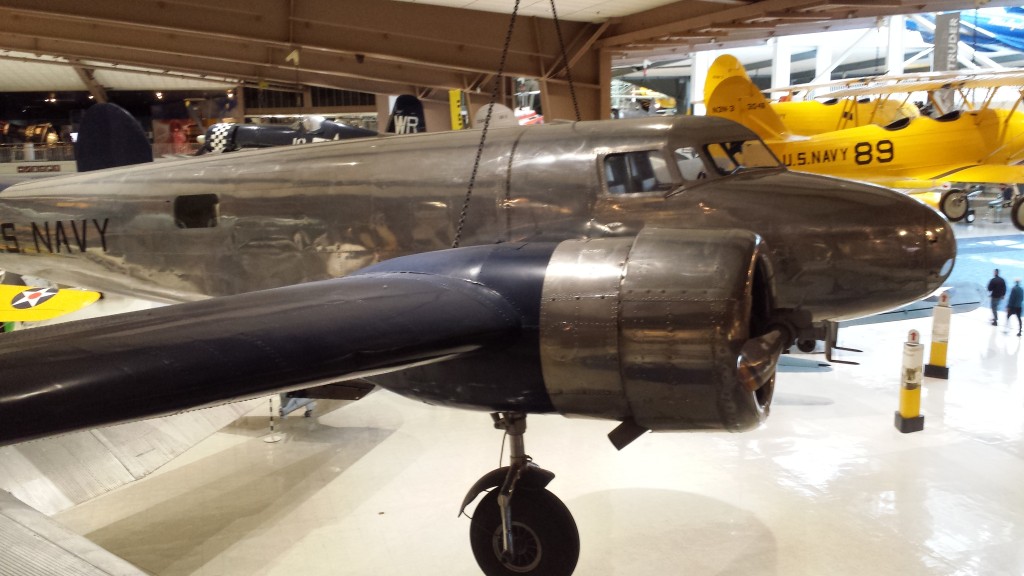 Side view of a Lockheed L-10 Electra, the same plane Amelia Earhart was flying when she and Frank Noonan were lost in the South Pacific in 1937.  I think this L-10 Electric is in the Naval Aviation Museum because the U.S. Navy spent weeks looking for Earhart after she didn’t make it to her next scheduled stop. 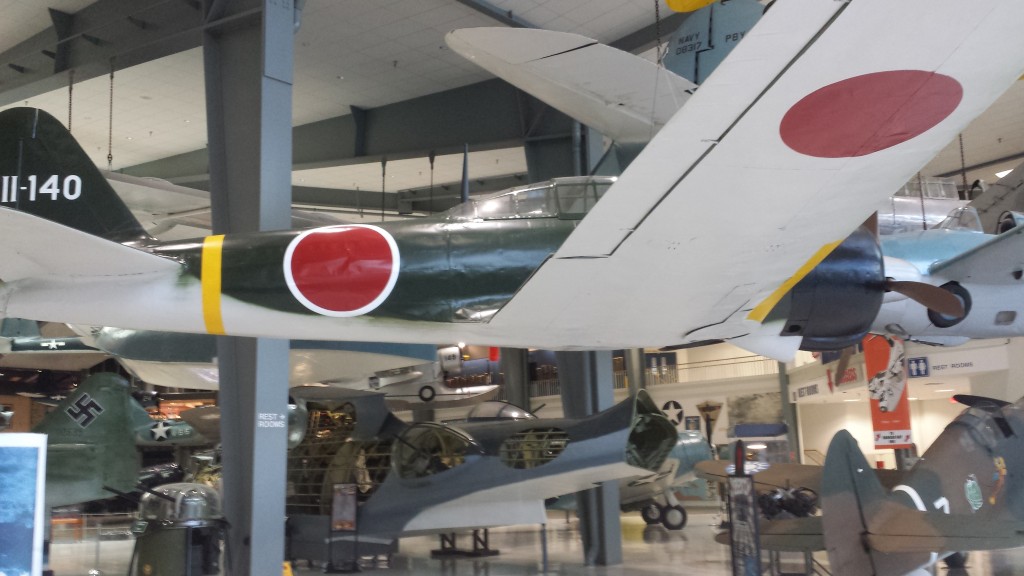 One of the famous Japanese Zero aircraft from WWII. 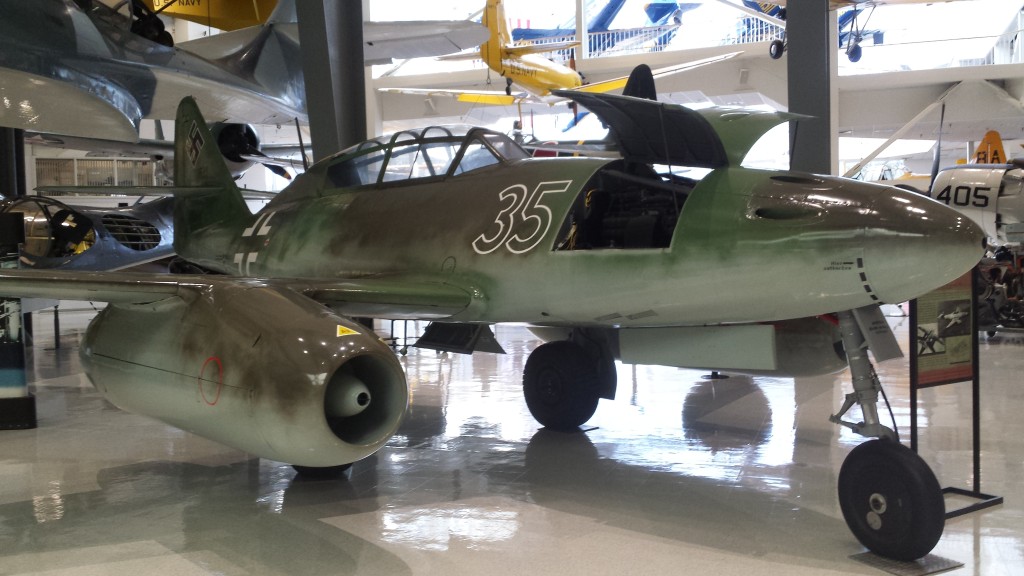 German Me-262 jet aircraft, which the Germans deployed near the end of WWII. I’m not sure there is really any connection between this aircraft and naval aviation, but it is a very famous aircraft nonetheless. 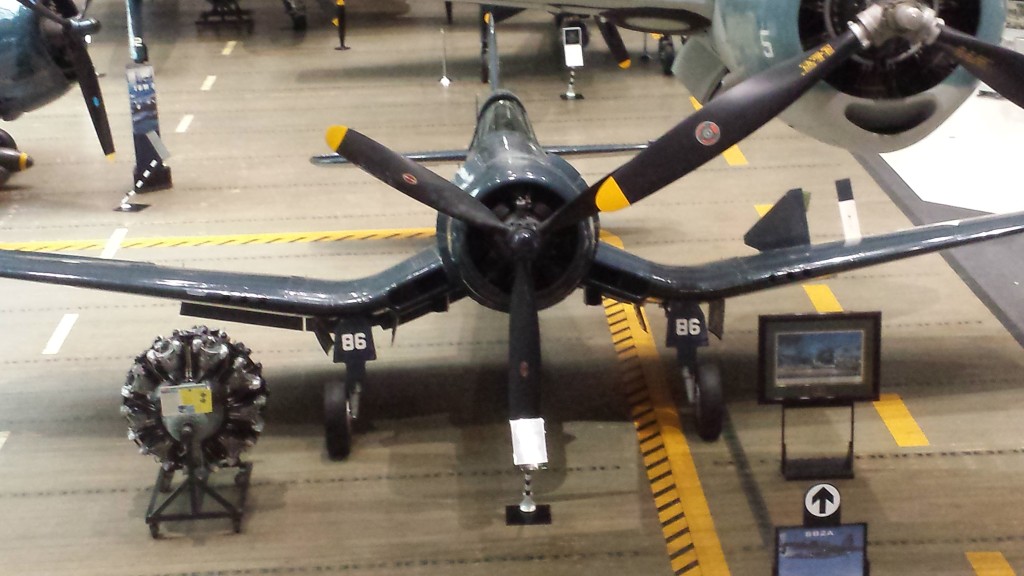 Corsair aircraft used by both Navy and Marine pilots during WWII. Pappy Boyington and his Black Sheep aviators used this plane in WWII. 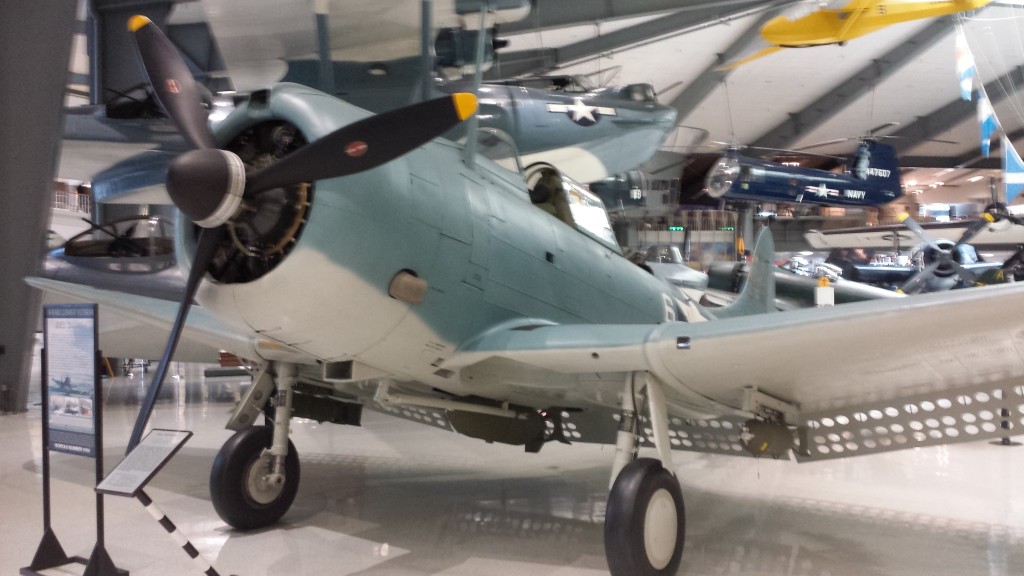 Grumman F4F Hellcat, which was famous for its service in the Battle of Midway.

If you’re still with me, the next two photos have a family connection.  During WWII, my uncle Paul Gallagher served at NAS Pensacola, and was an instructor teaching Navy pilots how to fly the North American Aviation SNJ aircraft.  I took two photos of the SNJ. 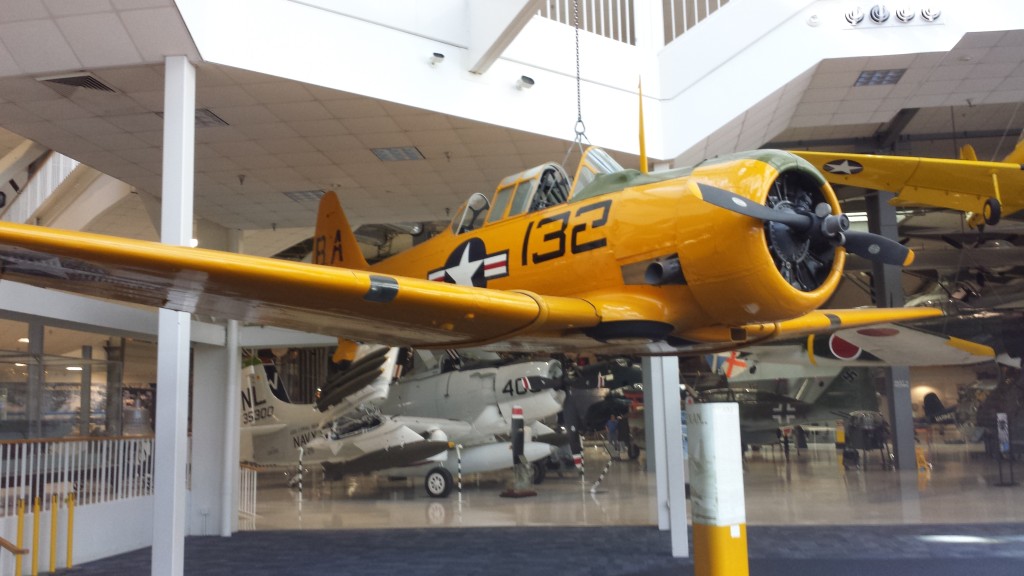 Another photo of the SNJ. North American Aviation made the same plane for the Army Air Corps, which they called the AT-6. My Dad flew the AT-6 as an instructor in 1945 at Newburgh Field, NY. 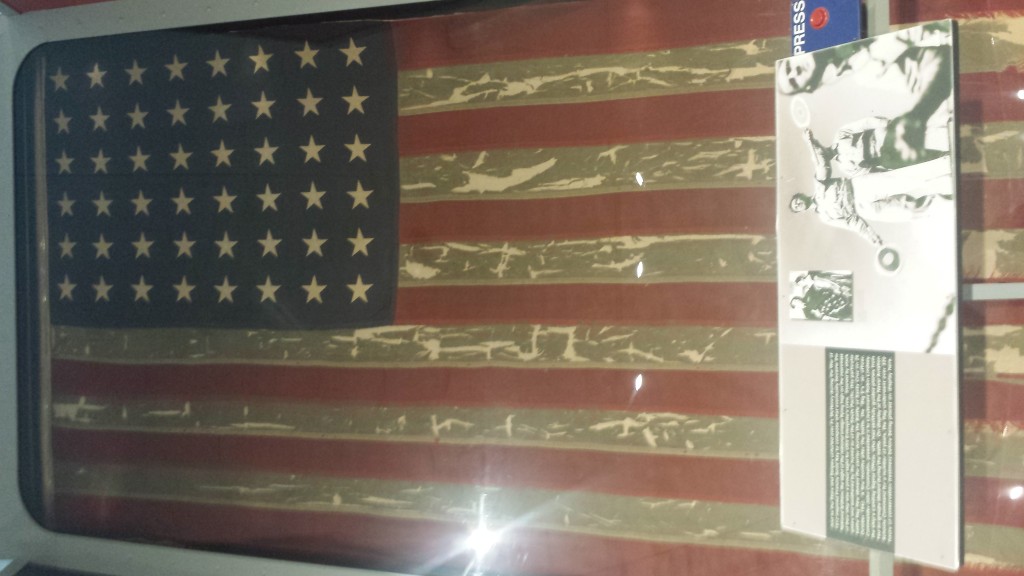 Battle flag of the USS Enterprise aircraft carrier, the same carrier that Jim Doolittle’s raiders used to take off from when they bombed Tokyo in April 1942. Beth and I toured the USS Enterprise, which is now located in NYC.

After visiting the museum, I returned to our hotel and picked up Beth.  We had a nice lunch at a nearby Panera Bread and then went to a Barnes and Noble bookstore, since I was nearly done reading one of the two books I brought on this trip.  By the time we made it to the Holiday Inn Express in Crestview, Mark and Tim were already there relaxing in the pool’s hot tub.  We all relaxed in the afternoon, and then Tim and I went to Saturday night mass at Our Lady of Victory Church in Crestview.  Our proof of admission is a photo their church bulletin (see below). 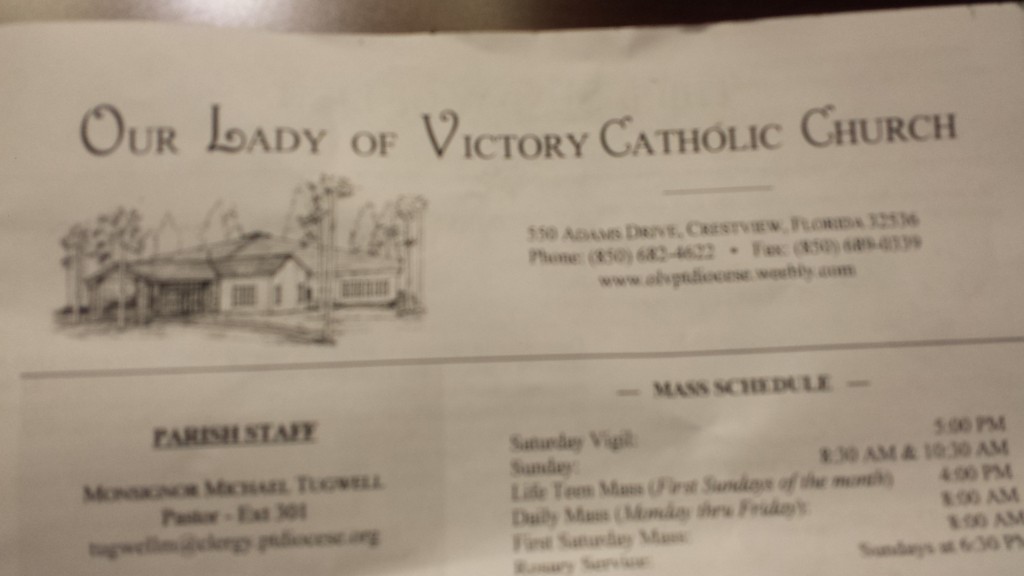 Tim and I returned to the hotel after Mass, picked up Beth and Mark, and then went to an excellent dinner at the Wild Onion in Crestview. 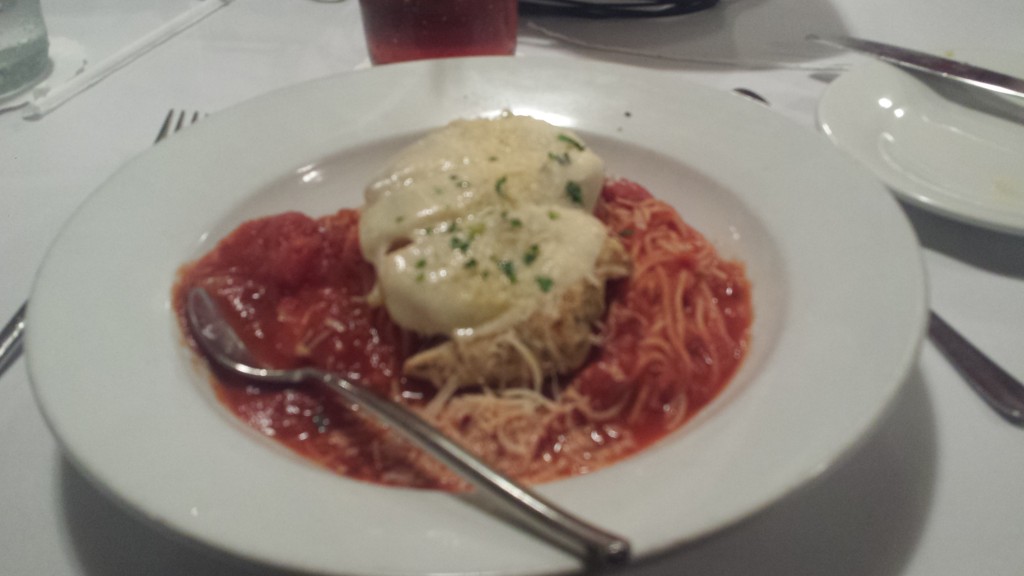 My chicken parmesan entree – it was just OK, but the desets were outstanding!

Tomorrow’s ride is all the way to Marianna, FL, which is about 92 miles from our hotel.  Wish me luck!