The temperature was about 52 degrees when we left Poplarville, plus it was rainy and cold.  After riding about 1.5 miles, we decided to stop in at the Hardee’s fast food restaurant to get out of the cold and rain and also get some real breakfast, since none of had eaten anything substantial in our cabins.  All of the Poplarville locals were extremely friendly to us, asking us where we were from (and then commiserating with us over recent Eagles trades) and where we were headed.  In the Hardee’s I took this picture, the only one I managed to take today. 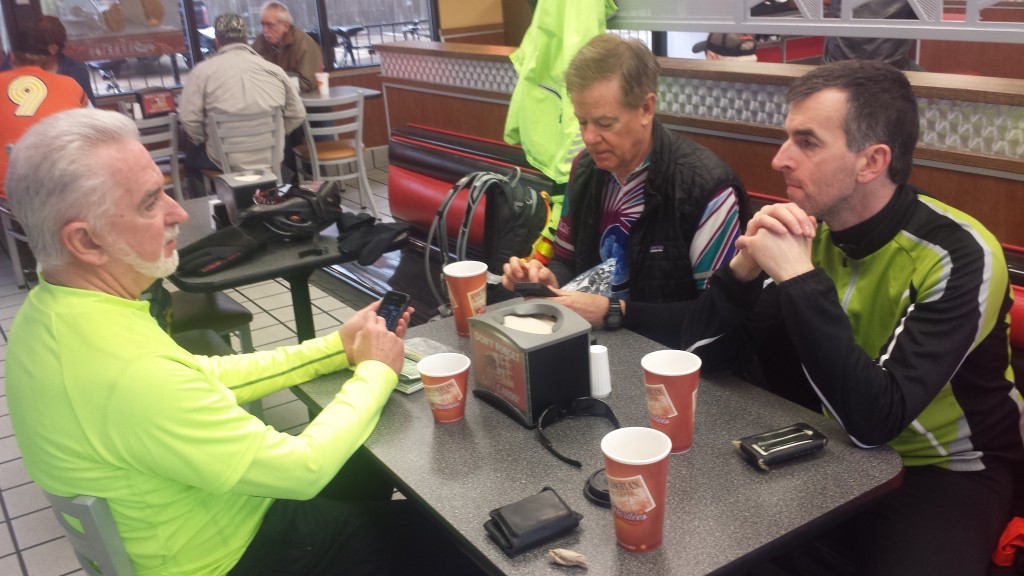 The guys at the Hardees Restaurant in Poplarville, MS. All of the people in this fast food restaurant were incredibly warm and friendly to us. Maybe they felt sorry for us because of the awful weather we were riding in?

The main things that happened today were that Mark unintentionally hit a dog on his bike, but somehow managed not to fall off his bike, which was amazing!  The dog came out of nowhere and Mark did not have time to get out of the way.  The dog really looked stunned, but otherwise appeared unhurt.  And I broke another spoke, which Matt again helped me tape off and loosen the adjacent spokes so that I could continue riding.  This happened around mile 20 of a 78 mile day, and we got in too late for me to take the wheel into Mobile for spoke repair.  So I am going to roll the dice and ride tomorrow and hope I don’t break another one before getting to Mobile.  I’m guessing I have another 50 miles to ride before this leg ends, after which I will get the wheel re-spoked at Drexel Hill Cyclery.

But the really best thing that happened today was getting picked up by Beth in Vancleeve! That was the end point of our ride today, and the plan was for Beth to pick us up in Vancleeve for the drive to Lucedale.  After warming up in the New China II restaurant for only about 10 minutes, Beth arrived, we loaded up the bikes, and ordered Won Ton soup for the ride to Lucedale – and boy did that hot soup hit the spot! But the warm ride in the car with Beth was the best part of the day for me!

The temperature dropped throughout the day, ending up a tad over 40 degrees at the end, which felt even colder than that since we were wet from getting rained on.  Tomorrow’s weather should be dry but still on the chilly side.  This is our last night in Mississippi since tomorrow we will get to Mobile, AL.  I am positively impressed by the friendliness of Mississippians, which has been true of people in every state we’ve biked through!