Luck of the Irish

Hello all, Matt here, long time reader, first time blogger. As you may have picked up from the other recent posts, I’m joining my dad, Mark and Brian for the second half of this leg. I flew into Baton Rouge last night after a day of airport delays, landed in intense fog, and was surprised to deplane into a brand new terminal (seriously, the fresh paint was literally still drying). It was close to 8pm and I still had to assemble my bike when we got back to the B&B, so I hustled down to baggage claim to see my bike case coming out third in line.  And it was intact.  Wow! Greatest airport experience ever.  And thanks TSA, I guess my distrust was totally misplaced – sorry…for now.  My dad picked me up and we drove back through the fog to the B&B.

Mark was still up, and my dad serenaded us with some of his famous reading out loud while I put my bike together in the living room of our small cottage. After that we set out our gear for today and turned in for the night. I was sharing a room with my dad and Mark had a room on the other side of the living room. After a few fitful hours of being serenaded by “chainsaw Tim’s” (yes, that’s his new nickname, feel free to use it) snoring, I gave up and slept on the couch. Oh well. Our 3 kids at home don’t let us sleep either, so it was par for the course. TRuth be told, he’s actually snoring right now napping in his bed!

After a quick breakfast, we met up with Beth and Brian, and headed out through the awesome trees draped in Spanish moss and out onto the highway. The first things that I noticed were the almost tropical smell in the air, and the amazing noise from the frogs.  They didn’t croak like the frogs we hear in our area, but almost chirp like birds – lots and lots of them at once. It was actually really cool! I was hoping to see a gator or snake but had to settle for the sound of frogs and beer cans instead. Brian wasn’t kidding when he said there were Bud Light cans everywhere. There was one every 100 yards in places and shockingly no any other brands were well represented. Mark and Brian counted the cans for a while but then decided to sing songs instead. Oh my. Music must not be in my genes, and that was confirmed when my dad’s decided that it was his turn to sing.  whatever it was that he launched into left nothing but quizzical looks on Mark and Brian’s faces.  They actually accused him of making it up.

Anyway, the riding today was great. The roads went through pretty varied terrain with the one constant being the watery ditches on either side the entire way. I don’t know if they are usually dry, but yesterday’s rain had filled them up and it spots we seemed to be riding on a causeway between streams. I’ve never been to this part of the country, so I enjoyed seeing the swamps (even without gators) and was impressed by the courtesy of the drivers (we’ll get to the exception to that later). I’m used to the east coast drivers in their constant rush and the number of drivers that waited for a safe area to pass and then went as far into the other lane as possible was refreshing!

We stopped about every ten miles for a snack, and only saw one set of historical markers, so we made good time through today’s 65 or 70 mile ride. At every stop my dad tried to convince us to take some dog-infested shortcut, but we soldiered on and weren’t legitimately chased a single time today. Only a couple of dogs showed any spunk and none of them actually came after us. Rain was a constant threat, but we only got drizzled on a couple of times. We had an annoying headwind for the last 7 or 8 miles, but the weather otherwise was very cooperative. In fact, just as we were checking in, it started pouring outside, so the luck of the Irish paid off in spades today! The only noteworthy exception to the courteous drivers was the numbskull that passed us and immediately turned right in front of me to get to Wal-Mart. Luckily, I saw her turn signal (it was right next to me as she started to turn) and put on my brakes in anticipation of her idiocy. Crisis averted!

here are a few pics from today: 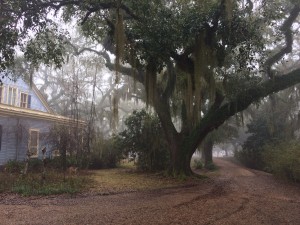 The Spanish moss at the B & B. 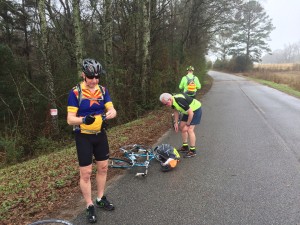 I think my dad was letting go of some swamp gas here. 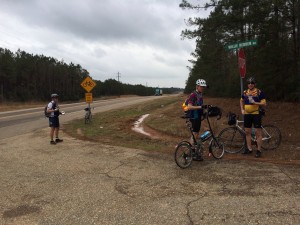 Louisiana scenery. Rolling hills. Ditch of water. Logging trucks. And three brothers having a great time together. Note the Share the Road with bicycles sign. And thanks Louisiana drivers for doing so! 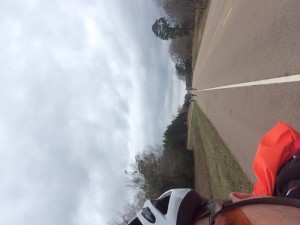 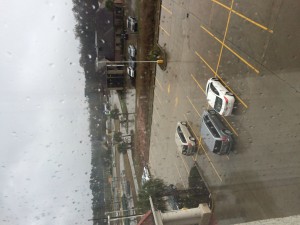 The pouring rain that just missed us and will hopefully be gone by morning.

2 comments on “Luck of the Irish”