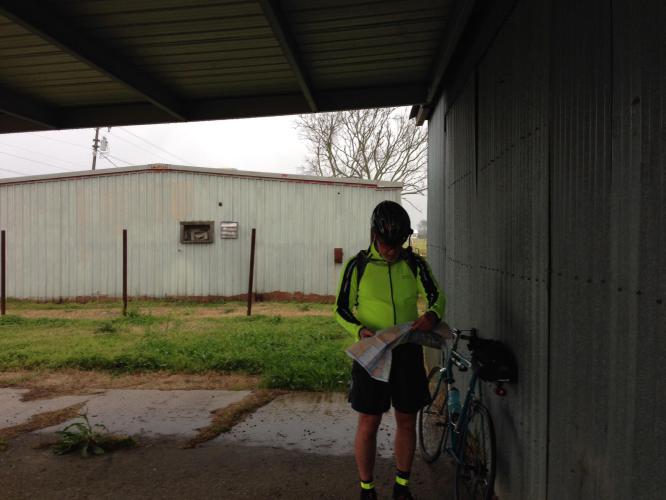 Ducking under an awning 15 minutes into the downpour.

It was with a good deal of trepidation that I began riding today. It was cold and raining and we had lots of miles again today. The Adventure Cycling maps route from Ville Platte to St. Francisville is over 100 miles. Tim (the mapman) found a different, more direct route using Rt. 190 East. Brian and I always defer to Tim when it comes to directions. Well, there is a reason why you should not use 190 unless you are riding on a Sunday with light traffic. It’s called the Atchafalaya River Wildlife Refuge and it was 4 lanes of high speed hell with no shoulder for 5 miles.

It was completely unexpected and like dummies we just got into it and there was no turning around so we blasted on through. I tried to keep the three of us together as I was leading but Brian fell behind and Tim wasn’t waiting around for stragglers. I kept hogging the whole right lane so trucks would move over and they did. Brian kept falling further and further back so finally I gave up and just like Maverick in “Top Gun”, I left my wing man behind. It was the noise that distracted us the most because there are metal expansion joints every 100 feet. Cars on both sides of the road hit one every 10 seconds and provided a constant banging in our ears. It was scary noisy. When we reached the end, there were lots of smiles and high fives and stained shorts to go around. Tim and I were incredulous to hear that Brian actually stopped to fix his saddle bag in the middle of the bridge. He’s nuckin futz!!

I didn’t realize that we would be crossing over the might Mississippi River on the ride today. Wow. What a milestone. We saw some other cool stuff, too. We saw a River Otter that must have been hit by a car. They are like dolphins. You hate to see them harmed.

I think those flooded fields are actually crawfish ponds and not rice paddys. There are Mardi Gras beads littered everywhere. Lots of cattle ranches and farms but no dogs bothered us today. Water and swamps and bayous abound with bald cypress trees standing in the water. They say there are many snakes here but they will leave you alone if you don’t bother them. Well “duh”. However, it is pouring rain as a write this and there isn’t much dry ground. I remember an episode of “Naked and Afraid” (a brutal survival show where people are dumped in jungles or deserts or deserted islands without clothing or tools and left alone for 21 days) in a Louisiana bayou and all the snakes went to dry ground whenever it rained. We need to watch where we walk today. What about the alligators?

Other than the Atchalafalaya Refuge, the ride was great, with lightly traveled roads or roads with decent shoulders. There is a huge Walmart distribution center and even on Sunday, Walmart trucks come and go. Churches are everywhere; Catholic, Baptist, Pentecostal and all other Christian types in all sorts of old and new buildings; store fronts, stand alone metal sheds, old wooden buildings and the occasional standard brick building with steeples.

We eventually turned onto Rt. 1 along The False River and rejoined the Adventure Cycling route near New Roads. Unfortunately, when the roads surface is wet, bicycle tires get sticky and it’s hard to see debris. I got one flat right before the Mississippi and Tim got two flats right after the big Bridge. Bad way to end an otherwise good day of riding. We are staying in a B&B called The Butler -Greenwood Plantation, built in 1796 and is still occupied by the descendants of the original owners. The house has a formal Victorian parlor but isn’t open for tours anymore. Huge oak trees draped with Spainish moss and formal gardens from the 1840’s make this one of the few remaining Antebellum gardens in the state. St. Francisville is one of the oldest towns in Louisiana. It was established near the site of a monastery built in 1785 on land granted to monks by the King of Spain. This part of Louisiana was not granted to the U.S. in the Louisiana Purchase. It was part of Florida still ruled by Spain. In 1810 planters attacked and captured the Spainish fort in Baton Rouge and 74 days later American troops arrived and declared West Florida and St. Francisville part of the original Louisiana Purchase.

Today is a rest day for us and thank goodness as it is pouring rain. We completed another map section and tomorrow we will begin Map 6 on the Adventure Cycling Southern Tier ( there are 7 maps in all). We will do some bicycle maintenance and get ready to reach Mobile in another 4 days. I will also be making a “Name that Tune” playlist to test Beth’s classic rock knowledge. God Bless Spotify! 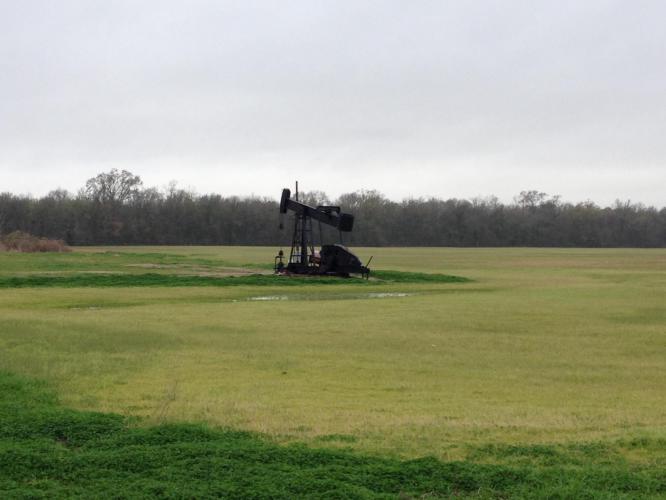 Oil derricks are in this state, too. 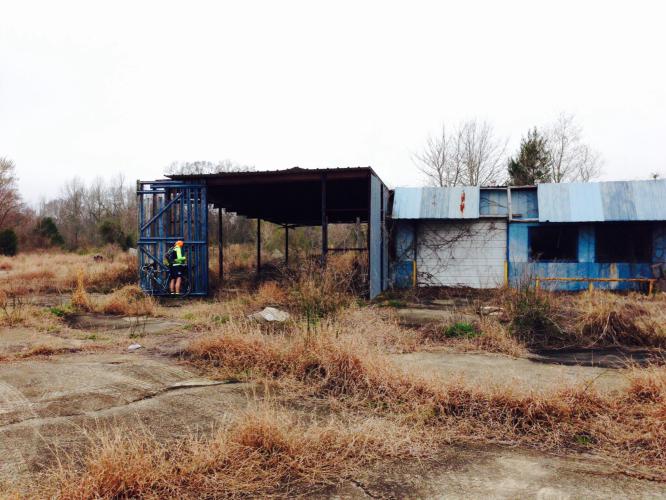 Worst rest stop in the world. But good privacy for when nature calls. 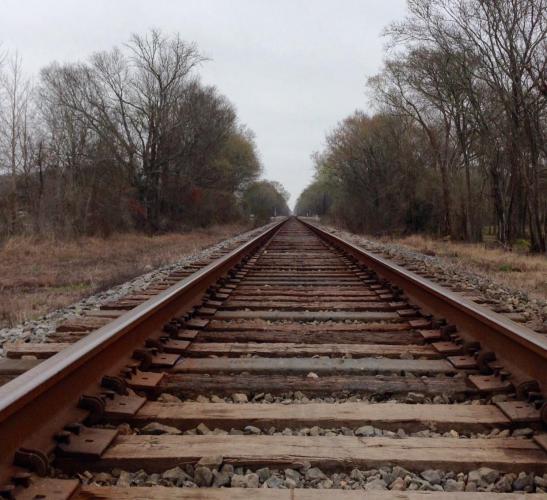 It always seems like we ride next to railroad tracks. It’s been like that since Arizona and Texas. 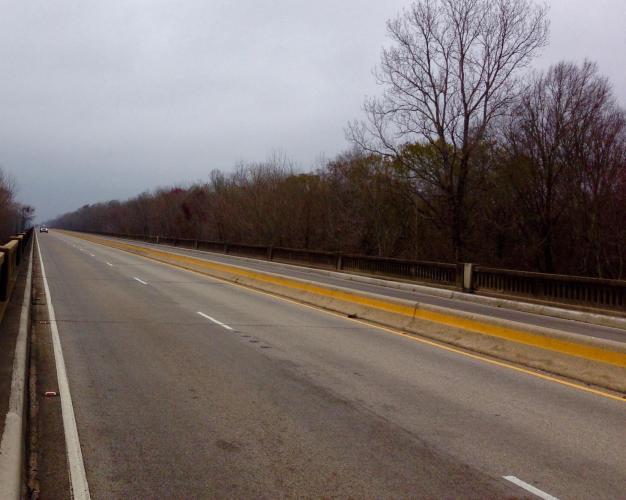 The end of the bridge across the Western edge of the Atchafalaya Refuge. This was one long stretch without any road kill. Animals would have a hard time climbing onto the concrete surface and we certainly didn’t wish to join that club! 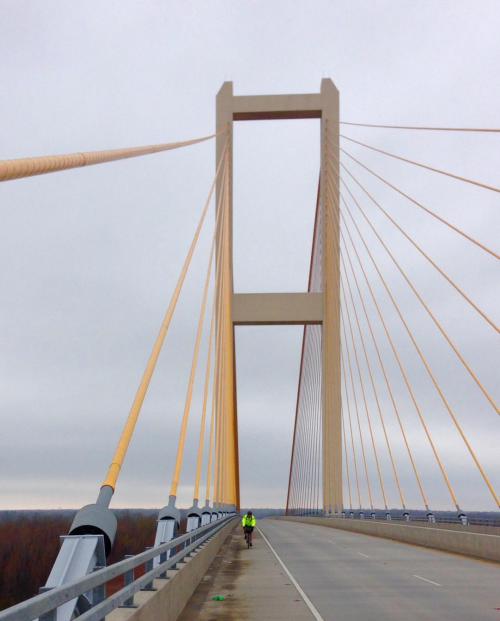 The Route 10 bridge over the Mississippi. 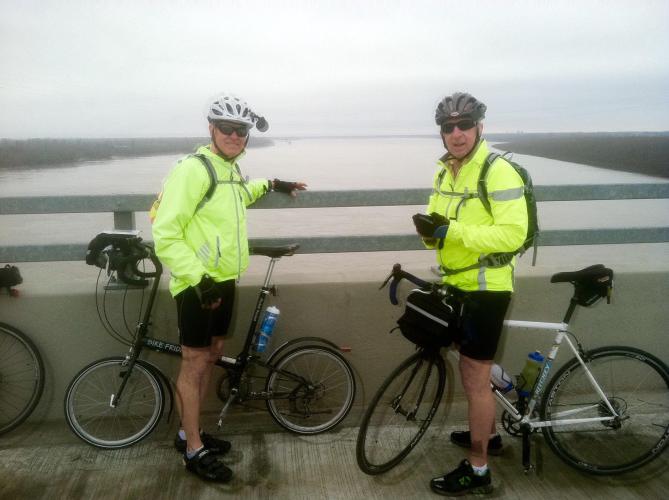 Top of the bridge over The Big Muddy. 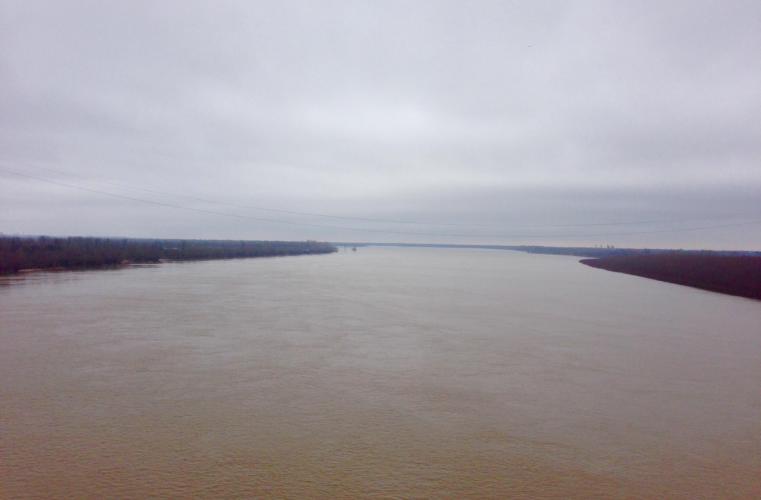 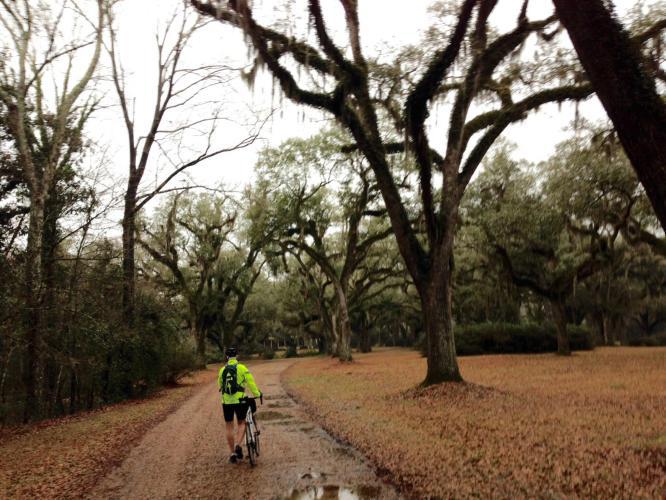 The Butler-Greenwood Plantation main house. Tim and I are in a small 2 bedroom cottage with a full kitchen and Beth and Brian are in a pool house with an upstairs bedroom and a downstairs bedroom/living room. The pool is nice but the water is unheated but with all this rain it’s gonna feel like we are swimming anyway. 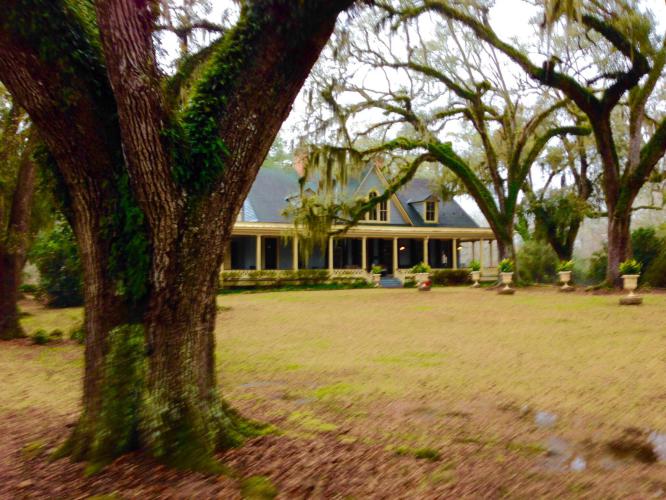 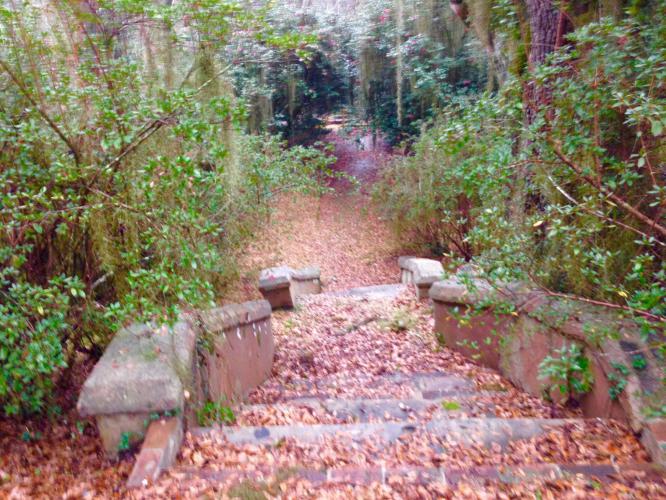 Must be an entrance to some of the formal gardens. I don’t want to bother any snakes so there will be very little exploring today.