Posted by Brian on March 2, 2015
Posted in: Uncategorized. 5 comments

At breakfast at our Best Western in Ville Platte, we all discussed the fact that we all had crazy dreams on Saturday night – maybe that was an omen we should have paid more attention to at the time.  I was able to remember 2 of my crazy dreams.  In one of them, I was a rookie playing for the Phillies and I was being interviewed by Harry Kalas.  I kept making references to Joe Hardy of “The Year the Yankees lost the pennant” fame, except that I was using my own body and not that of a 20-something kid after selling my soul to the devil.  Harry didn’t have any idea what I was talking about.  In my second dream I was teaching at Villanova before the days on Distance Learning and On-line courses, so I was using a blackboard and white and yellow chalk, except that I was giving a lecture on the U.S. Constitution and not the Engineering Math I usually teach – all very strange…..

We got going right around 8 a.m. and it started raining almost immediately and rained for about 20-30 minutes, at which point Tim located some shelter which we decided to use, even though it was early in the ride.  It drizzled off and on, more off than on, for most of the day, but it was nevertheless a very memorable day.  Tim had mapped out a route using roads not on the Adventure Cycling Association maps, because their maps would have had us biking 108 miles, and our route was only supposed to be about 80 miles – it eventually came out to 82 miles, quite a savings!  But after biking over a 4 mile long bridge with no shoulder, we figured out why our route is not the ACA recommended route.  What was most memorable about the ride was the bridge with no shoulder, biking over the Mississippi River (which was really quite awesome!), three flat tires, and Beth’s rescue of Tim, who finally had enough of changing flat tires.

One more memorable item from the day’s ride was all of the things we saw on the roads we biked, which included lots and lots of road kill, lots of discarded Mardi Gras beads from last week’s Fat Tuesday celebrations, and an almost unbelievable number of empty Bud Light beer cans – don’t people from Louisiana drink any other kind of beer?

Ok, enough talk – here are the pictures from the day’s ride. 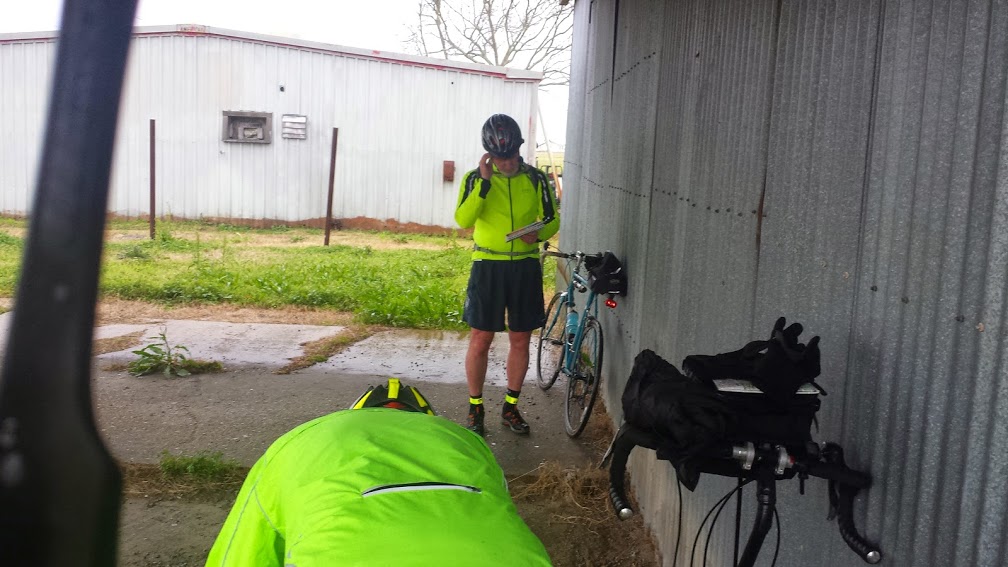 Tim consults map at 1st rest stop. We were really just trying to get out of the rain for a few minutes. Mark put on rain paints (which is why he is bent over) which naturally made the rain stop. Thanks Mark! 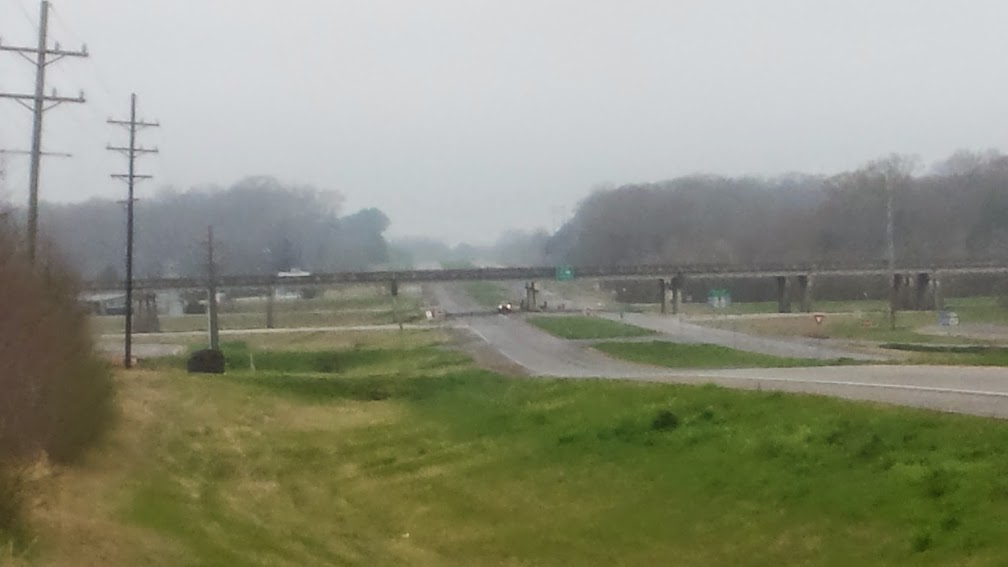 View of Interstate 49 near its intersection with LA 190. Before this trip I never even knew there was an I-49! 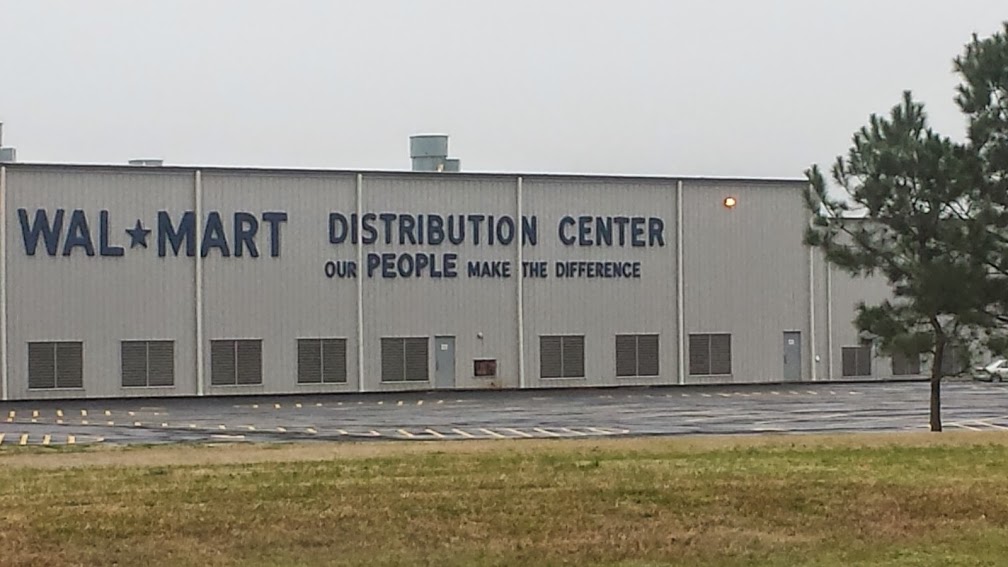 Wall Mart Distribution Center near I-49 and LA 763. Every single town we have been in on this leg has its very own Wall Mart! 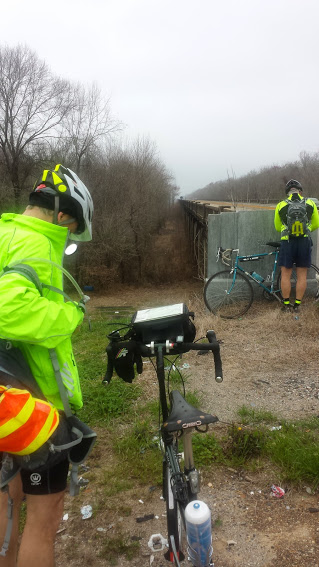 Tim and Mark at end of 4 mile long bridge along US 190. It really seemed like this bridge was never going to end. Fortunately, since it was a Sunday, the traffic was light and all of the LA drivers were very courteous! 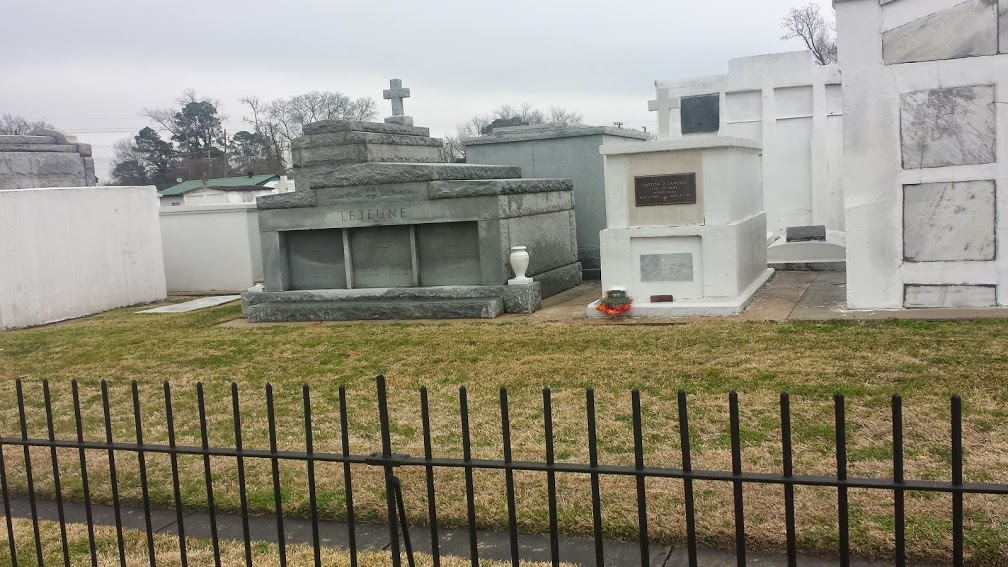 Cemetery in New Roads, LA. I am guessing the water table is high throughout all of southern Louisiana, because even here (as in the Big Easy), all of the burial sites are above ground. 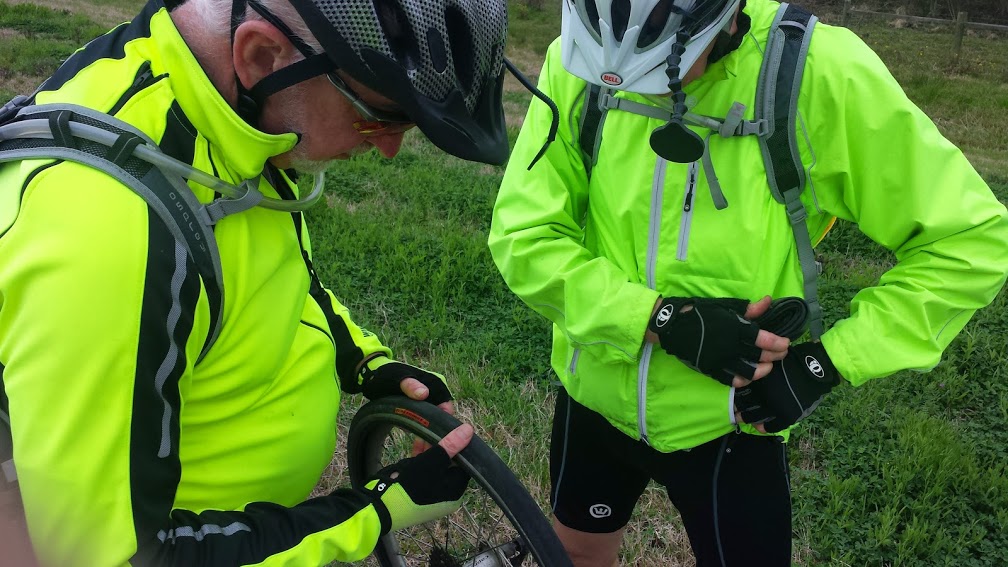 Tim inspects tire for one of our numerous flats. We had a total of 3 flats on Sunday’s ride. 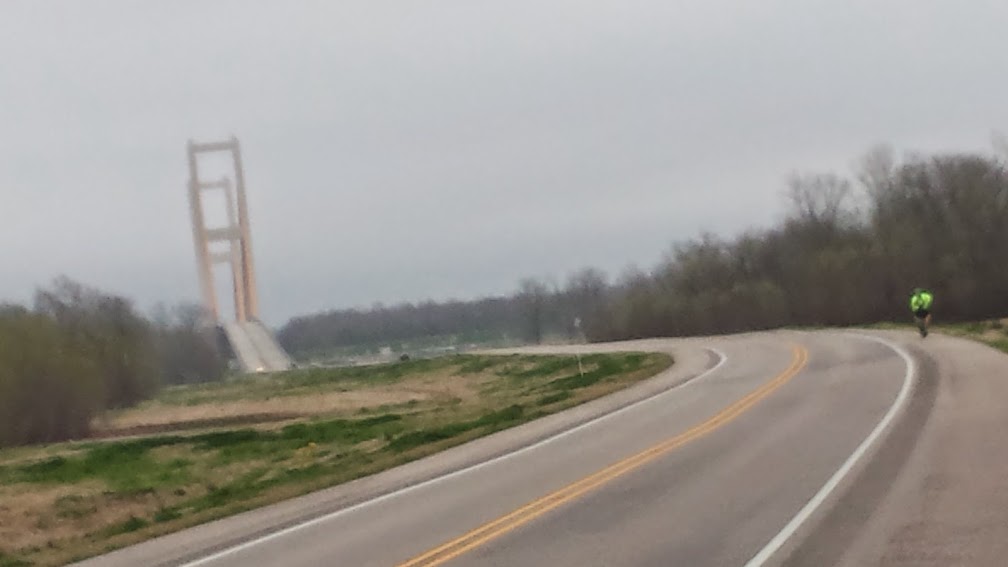 Approach to bridge over the Mississippi River along LA 10. This bridge was built in 2010 – before that everyone, bikers and drivers, had to take a ferry into St. Francisville, LA. 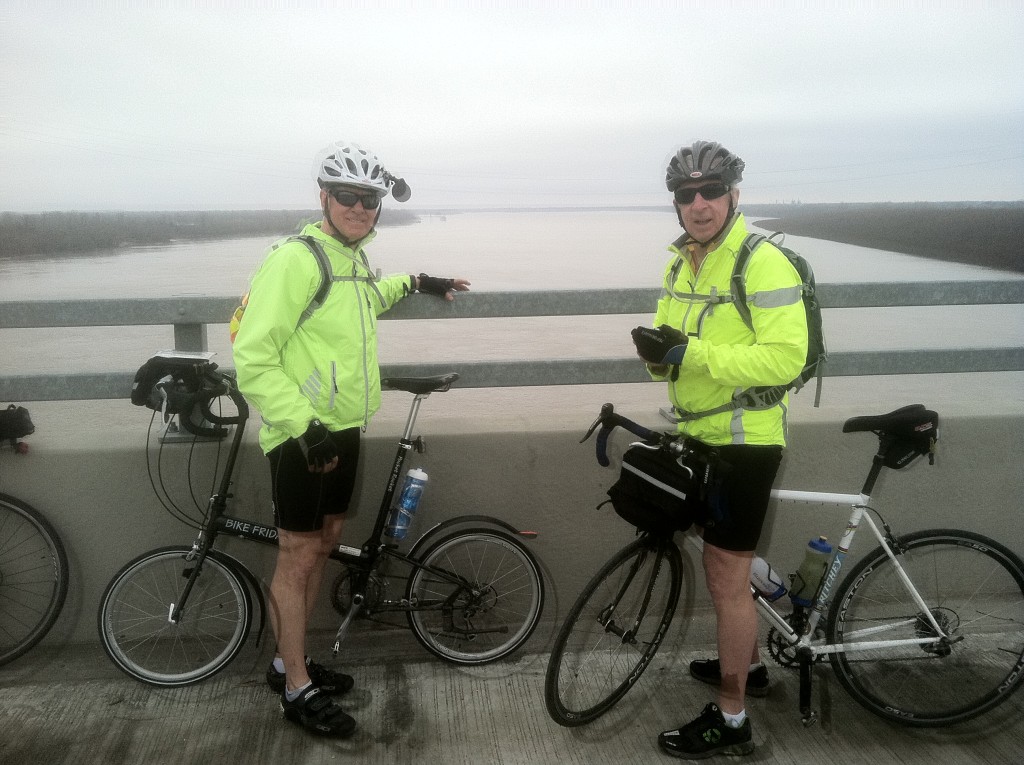 Mark and Brian and Mississippi River. I know everyone else has posted this picture, but it’s a good one, so I want to post it too!

The “big muddy” at the top of the bridge overlooking the Mississippi River on LA 10. It is really wide here and incredibly muddy! 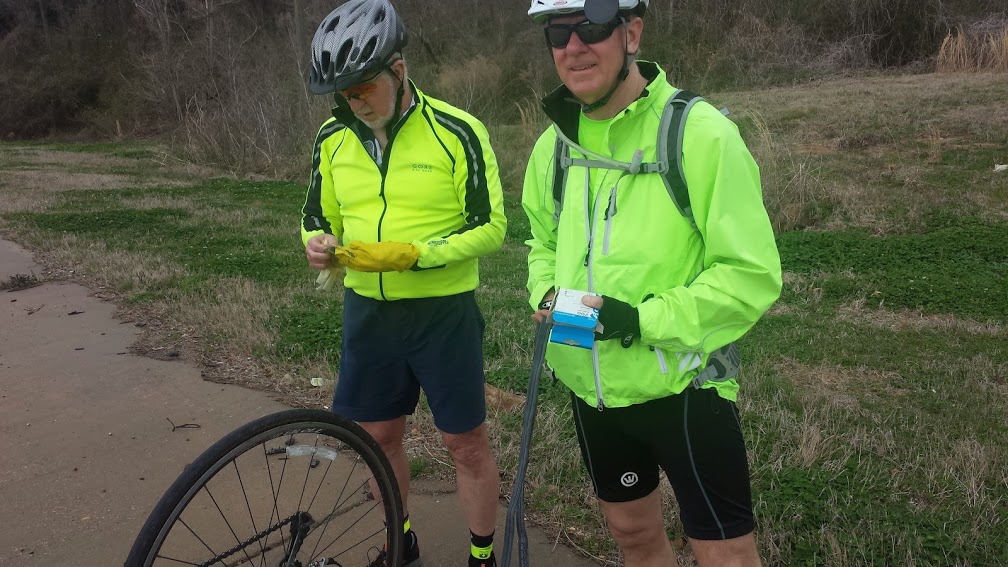 Another flat – this one on LA 61. One of the things about riding on wet roads is that your tires hold onto sharp things they would normally push aside – hence you’re prone to getting way more flats than you normally would riding on dry roads. 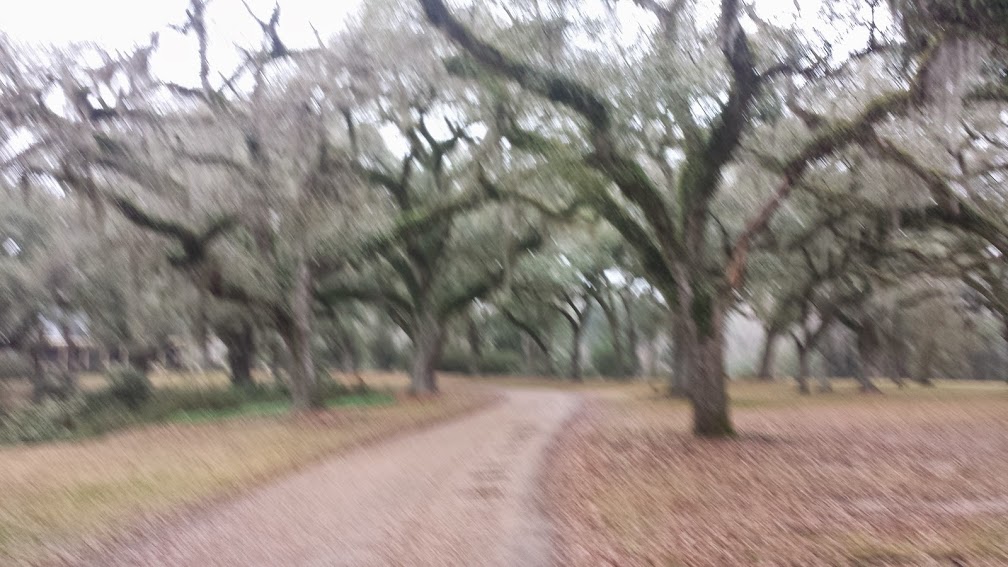 Photo of Live Oaks with their Spanish Moss on grounds of Butler Greenwood Plantation B&B. Sorry it’s a bit blurry …. 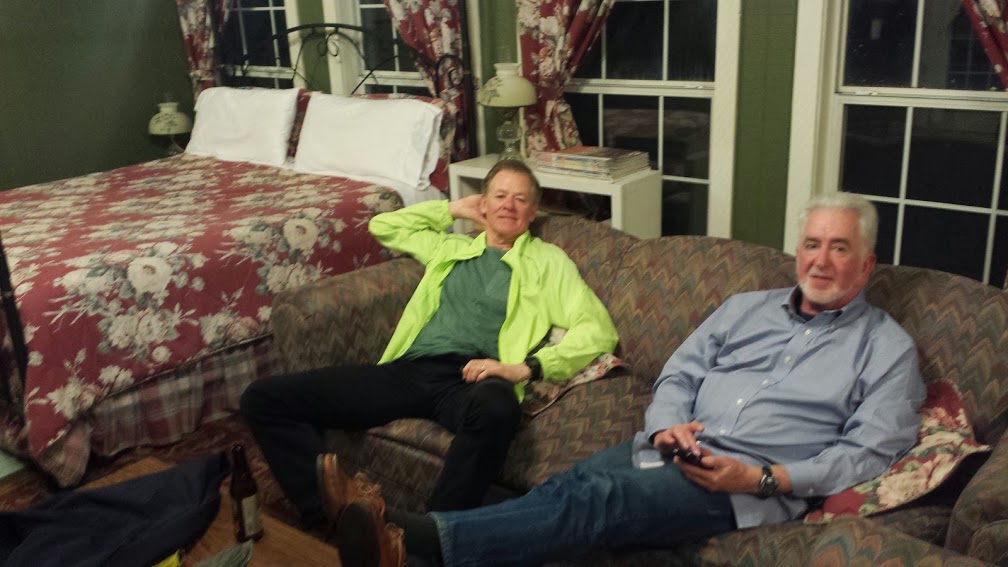 Mark and Tim relaxing after we made it to the Butler Greenwood Plantation B&B. This place has been in the Butler family for about 8 generations, since the 1790’s! 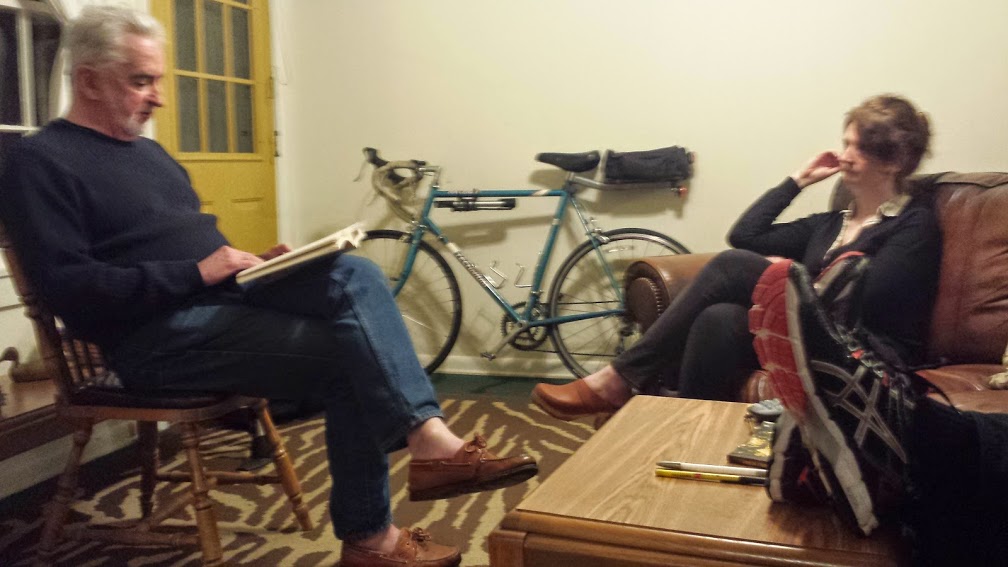 Tim reads from Conquering the Borderlands at Tim and Mark’s lodgings at B-G B&B.  Those are Mark’s size 14 sneakers on the far right of the photo.

We finally made it to our lodging quarters right around 5 p.m., about one hour after we should have made it.  Monday was an off “rest” day, which I used to catch up on work, and I did have a productive, though not very restful, day.  It turned out to be a really good thing that we didn’t ride today because it rained “cats and dogs” all day long! Matt (Tim’s oldest son) flew into to Baton Rouge and Tim picked him up around 8 p.m. and Matt will be riding with us the rest of this week.  Tomorrow we ride about 75 miles or so to Amite City, LA.  Hopefully the weather will cooperate and it won’t rain.