Day 4: Walk on the Wild Side

Day 4 was a Saturday. I hadn’t slept well because my room was opposite a Wal-Mart, and the bright lights from its parking lot filtered in through a crack in the blackout curtains of my room. I woke up early from a dream in which David Letterman had invited me to see a taping of his show. We were in a restaurant with a red and white checkered table cloth. He said he’d get me a good discount on the tickets. There was more to it, but it was mostly about my imagined sense of 1980s New York at night. The dream felt kind of like this:

I can hear Tim saying, “What the hell was that?” Or maybe “what the f*@% was that,” but that’s tomorrow’s entry. 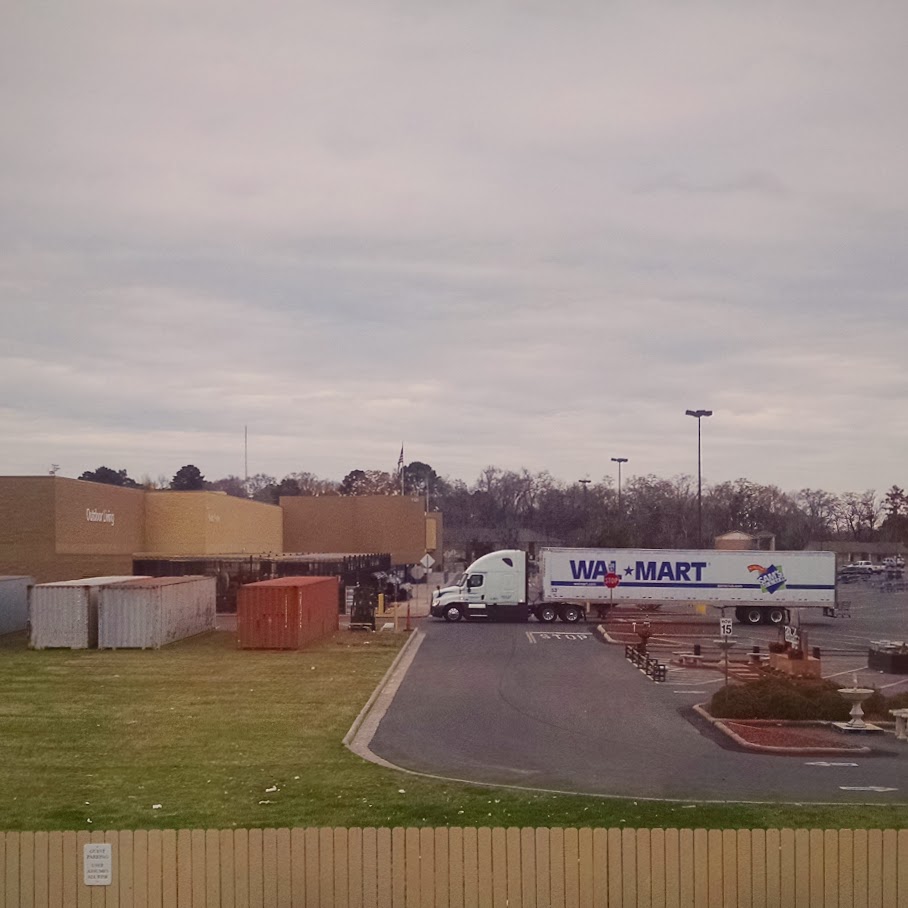 A truck pulls in for an early-morning delivery

Anyway, Wal-Mart. I have very mixed feelings about Wal-Mart. In each new town, it’s always a relief to find one because I know our basic needs will be met. Bananas, bandanas, band-aids, beer, things that don’t start with B: we have bought all of these in Wal-Marts throughout the south. And as I’ve mentioned before, there is a definite comfort imbued by well-known brands when you’re in a foreign city. In fact, the bikers are taking a somewhat unusual route this leg because I’m wary of staying in non-chain motels. 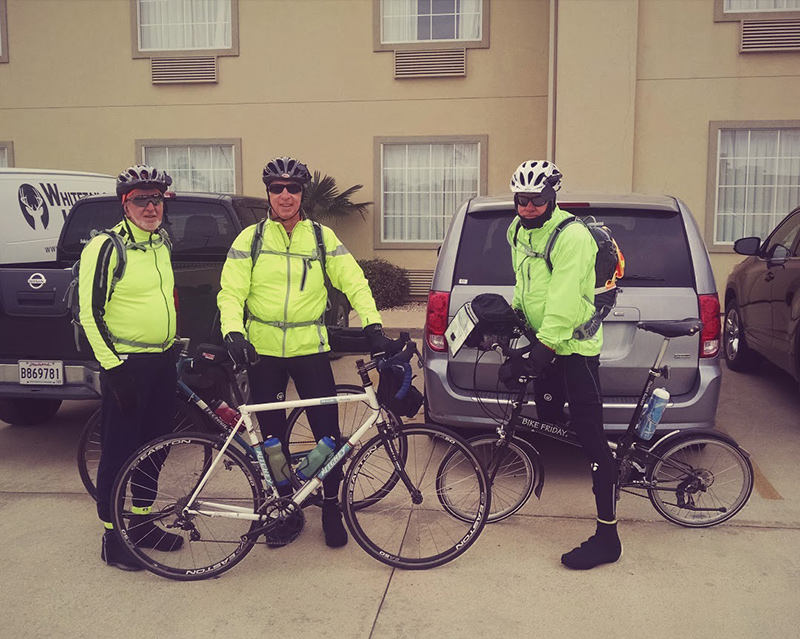 Another cold one! Mark does not look happy about it.

The guys headed out on another long, unpleasant ride. I worked for a couple hours in the Best Western, then started for Ville Platte.

I was expecting it to be the Louisiana equivalent of Brawley. (I’m linking to some greatest hits here, Steve.) But it actually wasn’t so bad. Right before I got to the next Best Western I saw this place: 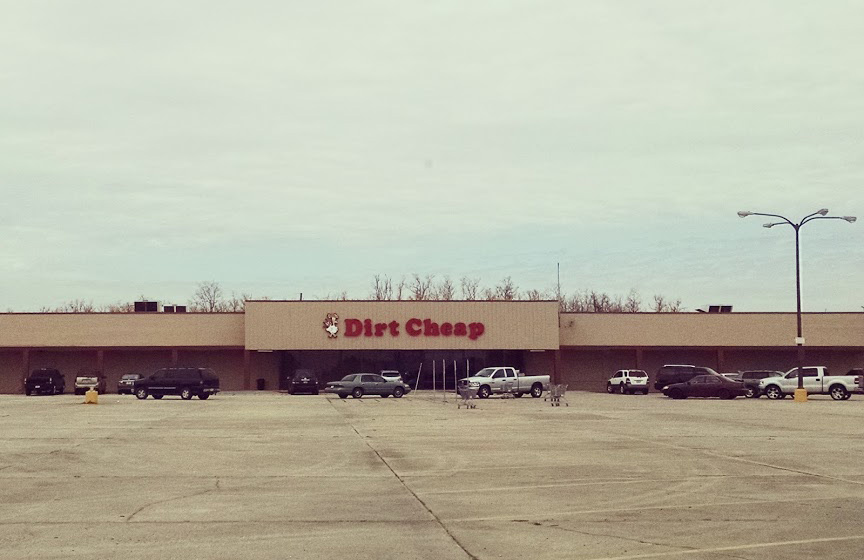 The logo uses Cooper Black, a font not seen in the wild very often these days

My thought, obviously, was, “I have to see what this is.” My theory was that it was a Wal-Mart competitor and that I’d be able to pick up some snacks.

But Dirt Cheap is actually more like a Goodwill, without the good will, and without any standards at all. 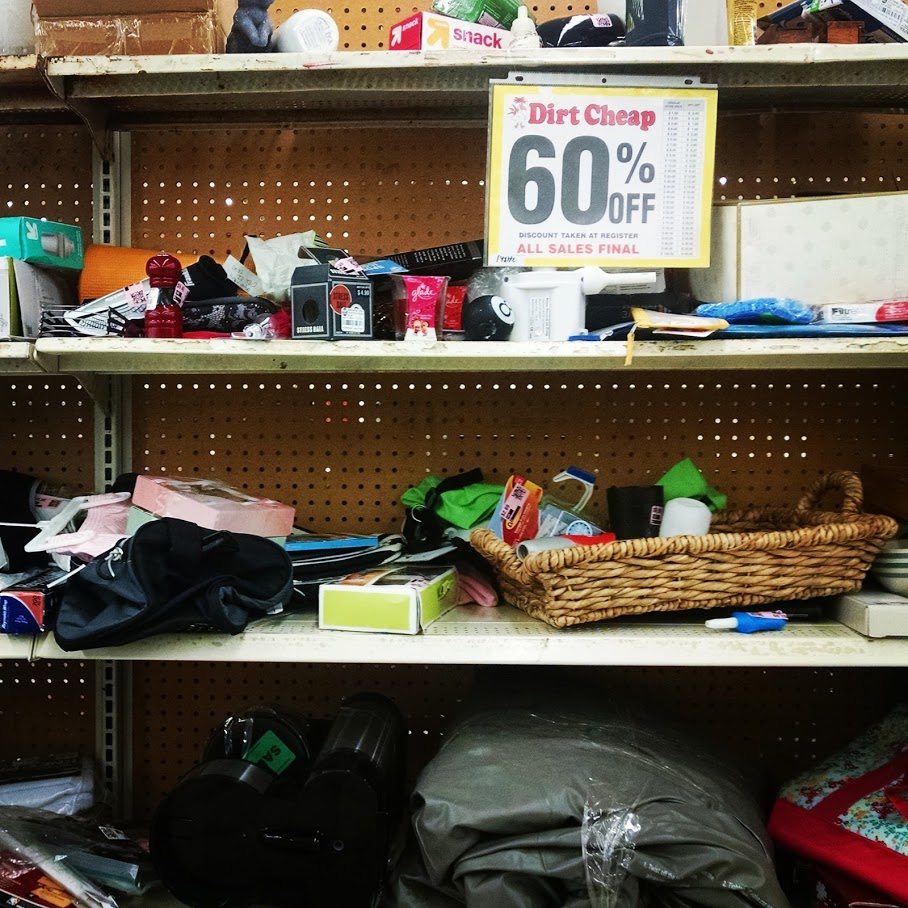 A tantalizing display of things that are 60% off

So, just imagine aisles and aisles that look like this, each with its own uniquely random crap. Here’s another example: 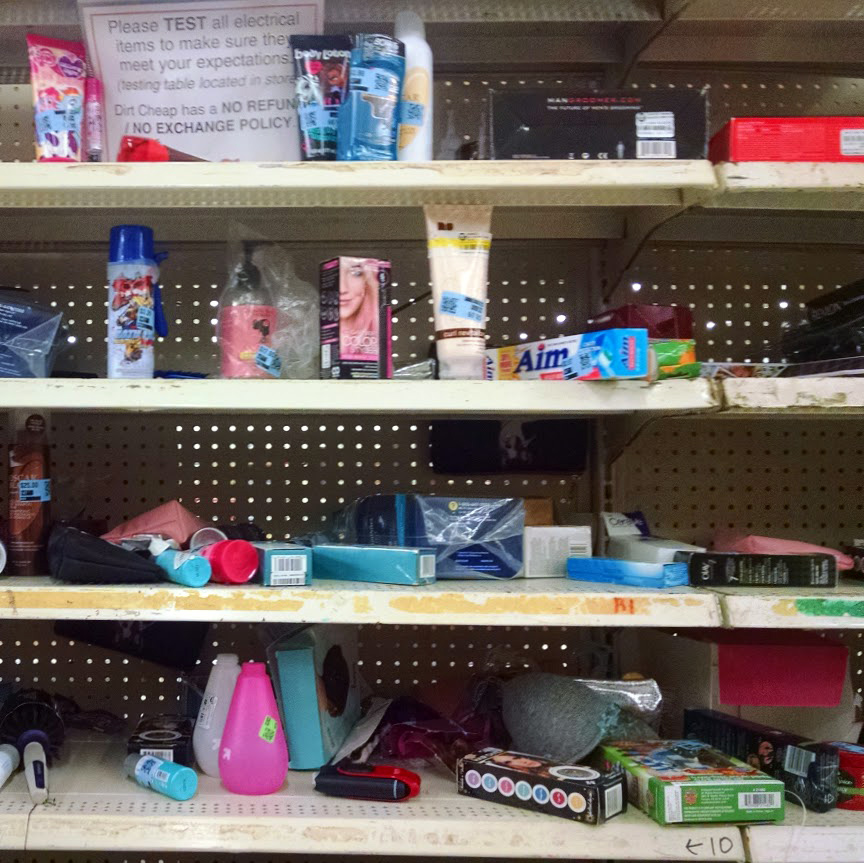 Perhaps you would like old toothpaste, some plastic bottles, a bra, or some other stuff

While it does not seem to have a Wikipedia entry, here is some background from the About page of its website:

The first Dirt Cheap store opened in 1998, in Petal, Mississippi, and has since grown into 57 stores and counting. Today, Dirt Cheap is a standalone company purchasing its own merchandise and exhibiting its own unique selling strategies.

I felt a little bad taking pictures and tried not to be too obvious. People were actually shopping in here, though the aisles of miscellany were generally empty of anyone. Most shoppers focused on the racks of clothing, which were arranged in a somewhat more civilized manner.

I left soon after getting the general idea, the refrain of AC/DC’s “Dirty Deeds Done Dirt Cheap” cycling through my head — actually I was saying it out loud over and over under my breath — and went to, yes, Wal-Mart for the snacks I’d set my sights on.

Then, because it was still a little before check-in time, I headed to the state’s pride and joy, Popeyes® Louisiana Chicken. There were kissing cop cars in the lot, and I immediately got nervous, because Silvester’s registration, like my many bottles of seltzer, expired long ago — in fact more than a year ago. (You gotta feel for Silvester; he hasn’t been given the love he deserves.) Starting in Arizona, with a few exceptions, we’ve been traveling through essentially lawless lands. But in Louisiana, the landscape shifted. There are cops. And I have no idea what will happen if I get pulled over in a rental car with expired tags. Maybe I’ll find out tomorrow!

So I pulled into a spot out of sight for the police cars, providing I left before they did, because I was right next to the only exit. I hurried in and placed my order.

Wouldn’t you have been less obvious if you’d gone through the drive-thru?
Sort of! I would have had to drive right past the cop cars in order to get in line. Like I would have been two feet away from them.

But the whole process would have been faster.
That’s true.

Did you really think the cops were in their cars and not inside, enjoying a leisurely meal of Popeyes unpossessive chicken?
Yes. I mean, I couldn’t tell!

Did you park at a weird angle that made it look like the driver of the minivan was a nervous person and/or scofflaw?
Yes.

There was no one in line, so my three-piece chicken tender meal was put together instantly. I decided to eat it in the car so that if the cops spotted Silvester’s tags I’d be there, ready to cooperate and play dumb. On my way outside, I saw two policemen in a booth in a relaxed posture, laughing over their chicken and ice teas. I had nothing to worry about, probably. But I decided it was too late to turn back. 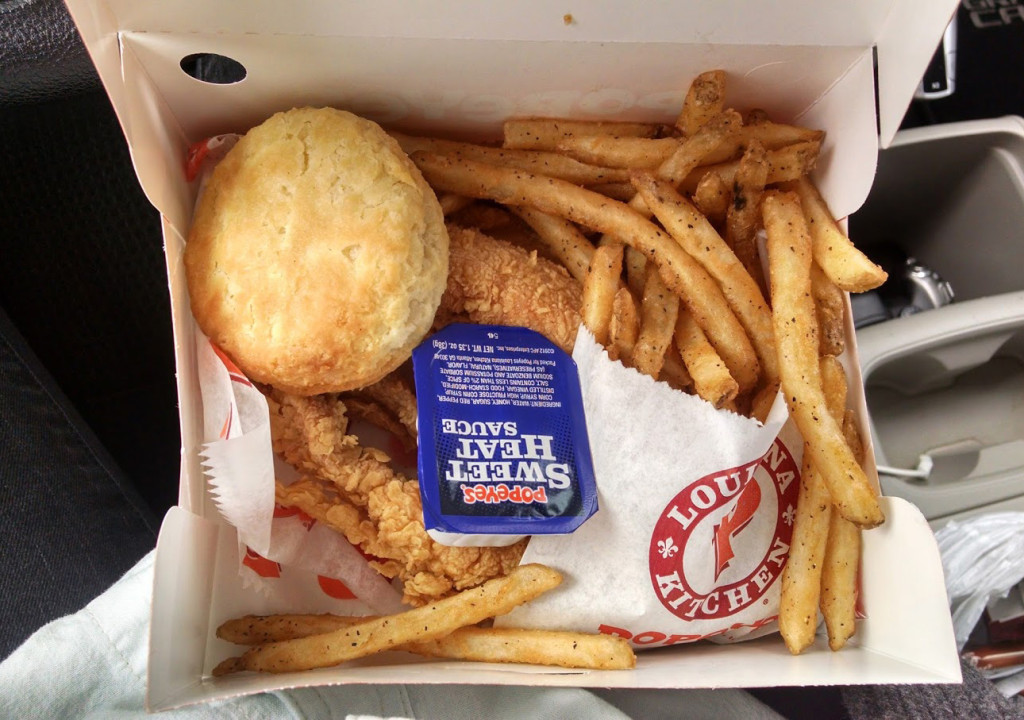 I took another photo with the sauce in the proper orientation, but my phone didn’t save it so you get this

I set the box awkwardly on my lap and dug in. I consider myself a chicken tender expert due to vast baseball park experience, and these were not nearly as good as I’d hoped. But the fries were great, and, spoiler alert, held up well in the fridge overnight, which fries never do. I don’t know if that means they aren’t real fries or real food or what and I don’t care. I did not eat the biscuit because I’m trying not to over-calorize. 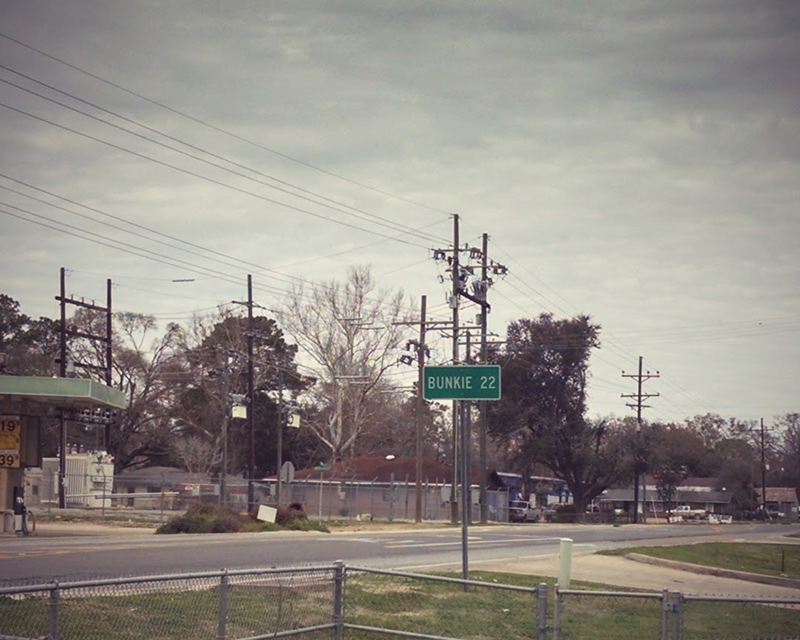 The pinky orange “Sweet Heat” sauce got all over my bleached chambray shirt, and in my nervousness I’d neglected to take napkins, and in my vainness I’d neglected to take photos. I just let it set on in to the fabric, telling myself I’d be able to deal with it soon when I got to the hotel. This was difficult for me. Five minutes later I pulled in to our next Best Western, covered the seven or so splotches with my sweater, and checked in. Once in the room, I immediately changed into a t-shirt (because it was like 65 degrees, a temperature my skin thought it might never feel again). Bar soap took the stains right out.

The Best Western in Ville Platte seemed like it might have been furnished by Dirt Cheap, but it wasn’t all that bad, except for an overly strong smell of commercial grade soap. I’m more sensitive to smell than I thought; it really has the power to disrupt my experience of a place. And later the new manager kept asking me if everything was okay, and I kind of wanted to give him all my notes, i.e., you need to get all new furniture and linens and you need get this weird smell out, but I mostly wanted him to stop asking, so I just said yes over and over and smiled falsely and agreed to write a positive review on TripAdvisor which I can’t in good faith write.

Dad and Tim went to church late and were back about half an hour later. We walked across the parking lot to El Charro for dinner. It was decent! I had steak tacos. 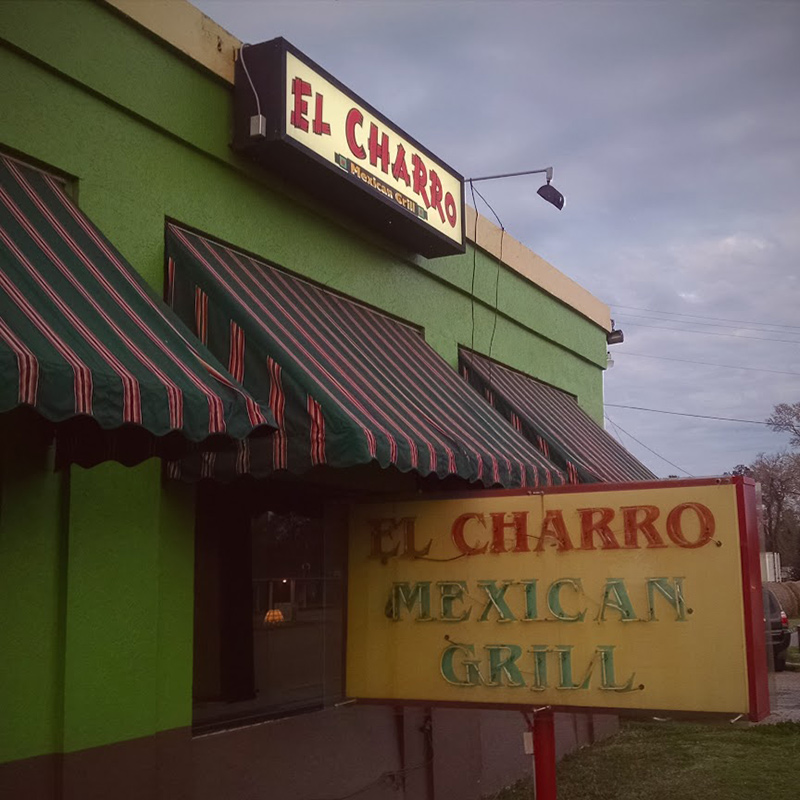 This place made some effort with their decor and I appreciated it. 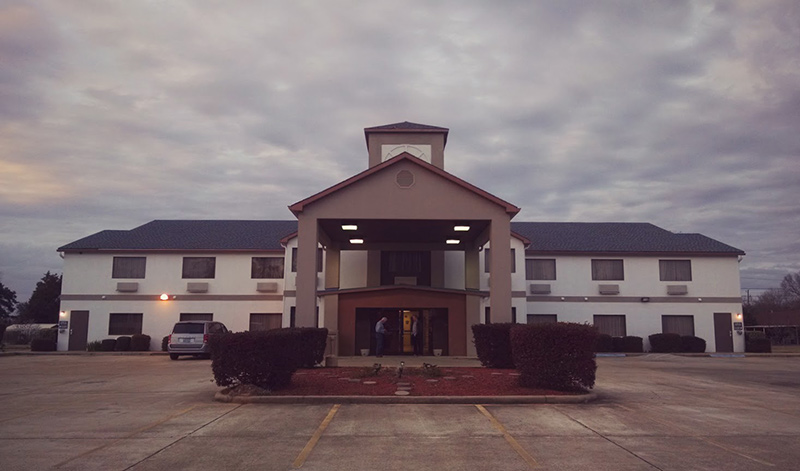 Our lonely Best Western. By morning the parking lot was almost full. I am pleased with this photo.

Back in my room, Dad and Mark blogged while I helped Tim map out the route for the next day. Tim asked if we could turn on the Weather Channel and the TV was tuned to AMC, and AMC was playing Jaws, so we watched that. Then the guys went to bed and Jaws 2 came on and boy, it’s not very good. 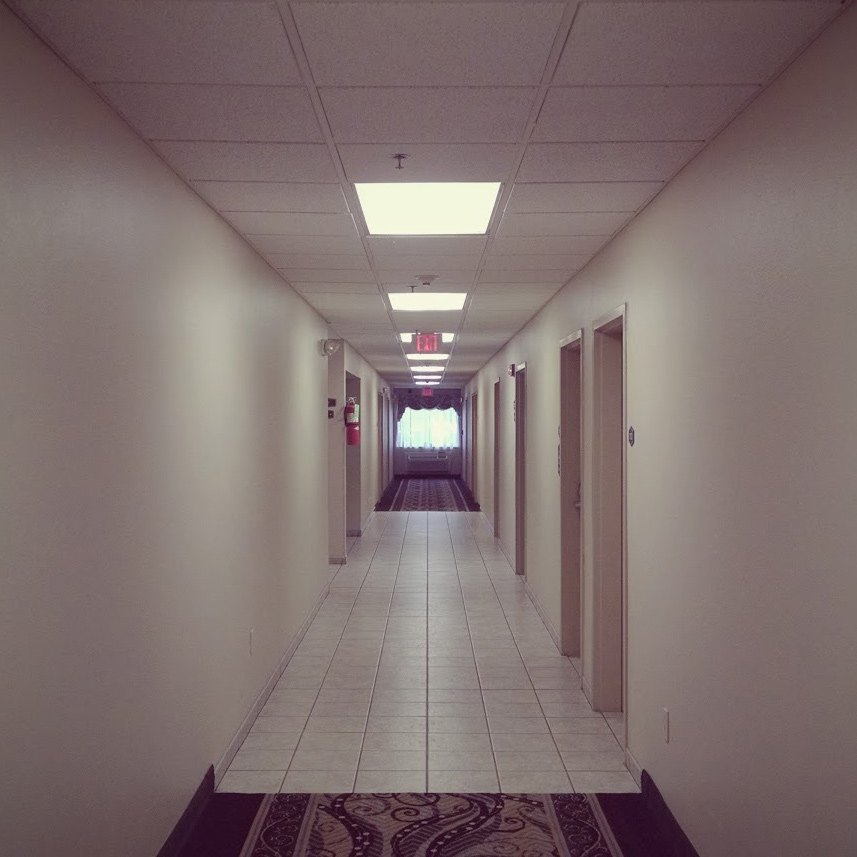 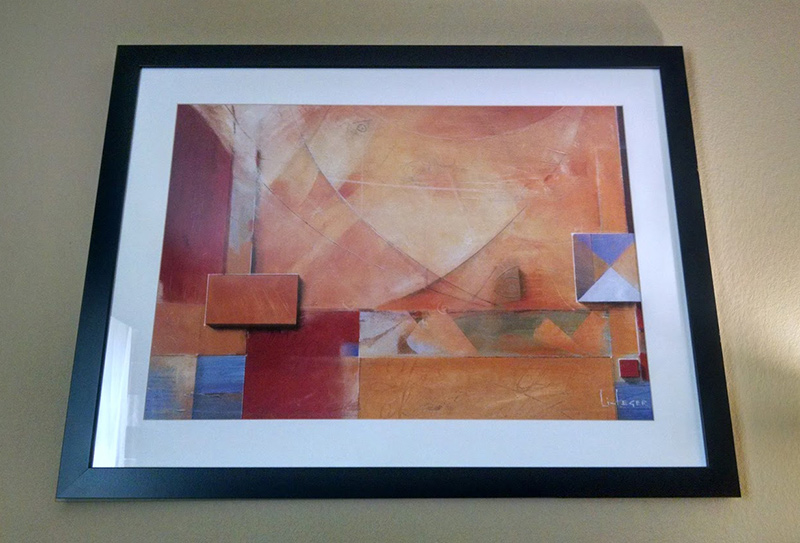 4/10. I don’t know. The best thing I can say about it, to tie things back to the ’80s, is that those raised boxes remind me very slightly of the abstract shapes in some music videos from my childhood. But it’s not bringing anything to the table as art, and it didn’t have anything to do with the room’s bland decor, so looking at it just made me feel cranky. But it’s not completely terrible. I just don’t like it.