Day 2: I Know There’s an Answer

Thank you to all who voted! (Sorry you missed the poll, Laura, but good name!)

Everyone, please give a warm welcome to Silvester. He has trouble shifting into second gear and I think his front driver’s side tire is going flat, but he’s been a reliable companion so far. 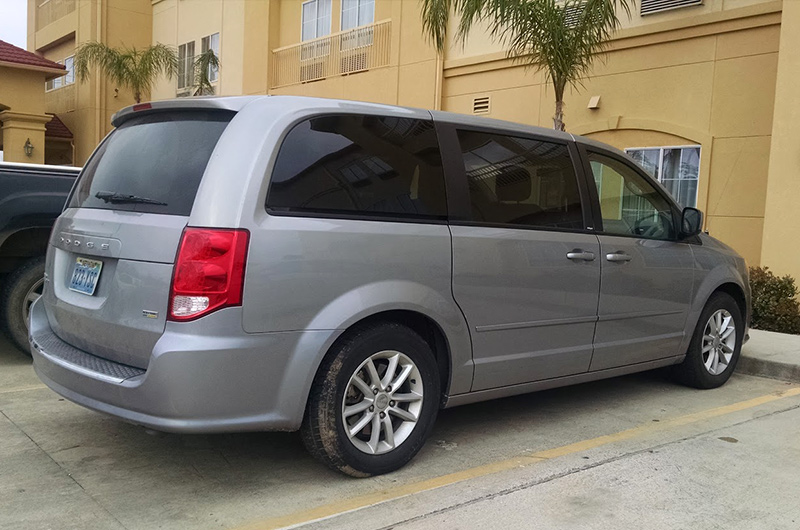 What’s there to say about Day 2? 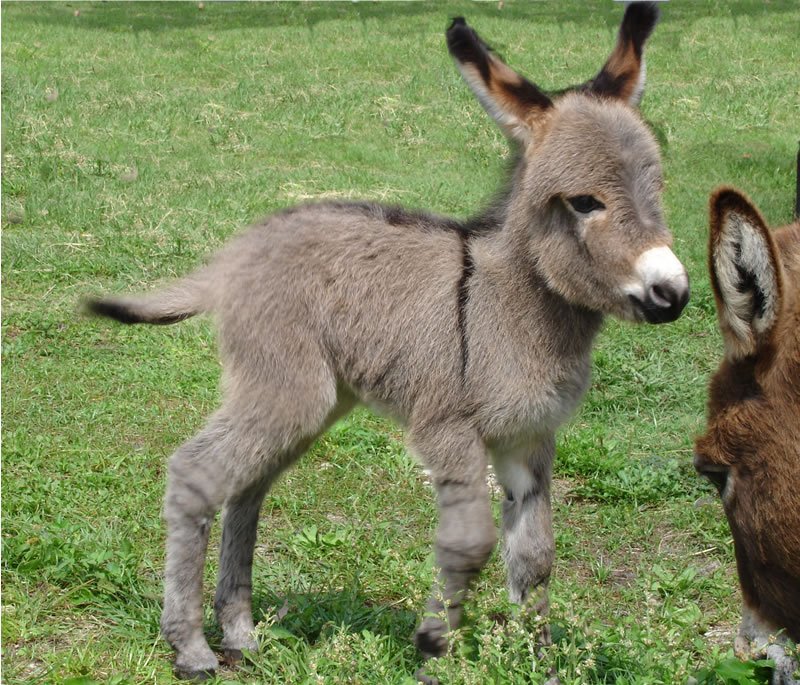 Why didn’t you stop to take a picture of the donkeys? I don’t like it when you use other people’s photos, it seems like you’re lying.

I know, sorry. The roads were pretty crowded and the timing just didn’t feel right.

We ate at a sad-looking but packed Italian place in a strip mall that had carpeted floors, fluorescent lights, and no liquor license. The food was pretty good, though! But not good enough for me to ever want to eat there again! Because atmosphere is at least fifty percent of my enjoyment of a restaurant! And I want to drink wine with pasta! And I will never be in Lumberton again!

Why aren’t you being more interesting?

Shut up! I’m using exclamation points, isn’t that good enough? Also I already told you, I have too much work.

But aren’t you going to regret not recording your days in minute detail?

Probably. I’m going to do my best and that will mean whatever it means.

What else happened yesterday that took time away from your blogging window?

This white/gold vs. blue/black thing. Everyone is already sick of it and so am I! But I spent at least an hour trying to see it both ways and discussing it online with Chris and Andy. I experienced something of an existential crisis prior to being able to see it as blue and black because I take seriously my ability to perceive color accurately. It seemed like something was wrong with my brain, and that upset me. But then I grew magical dual-sensing abilities and got over it and went to sleep. Wired has a nice analysis, if you’re interested.

How was your room at the La Quinta?

It had good feng shui and felt very cozy. Its branding was much classier than that of our last La Quinta, and it had high ceilings, a carpet with an inoffensive pattern, and a pleasing dusty orange accent wall behind the bed. The art was a good size for the room and had nice frames. And the bed was comfortable. Nice job, guys. (Art to come in tomorrow’s post.) 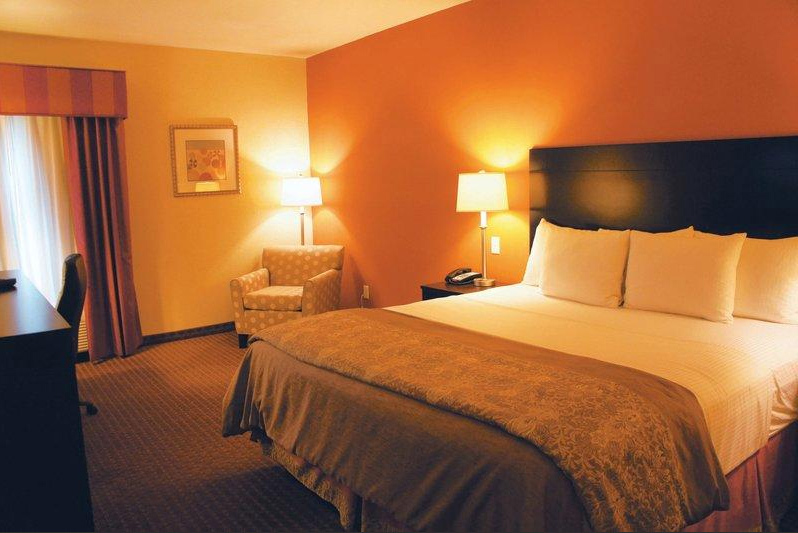 How does one pronounce La Quinta?

Did you come up with any band names today?

I did, thank you for asking! Today’s band name is Safe Mode. I came up with it when my phone got stuck on its boot screen and I kept pressing things and eventually it started in safe mode. It’s still not back to normal. This is a bad month for me and technology.

I’m bored. Can we look at photos now? 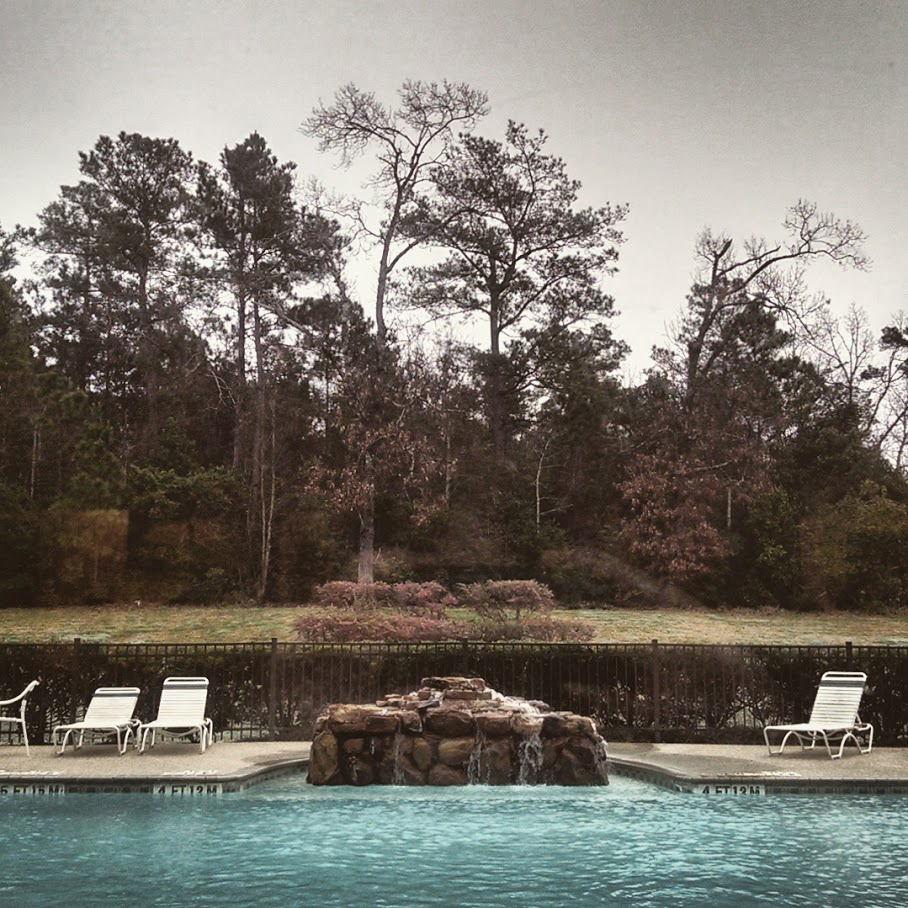 The lavish pool at the Holiday Inn Express. It had a 1960s Catskills quality. 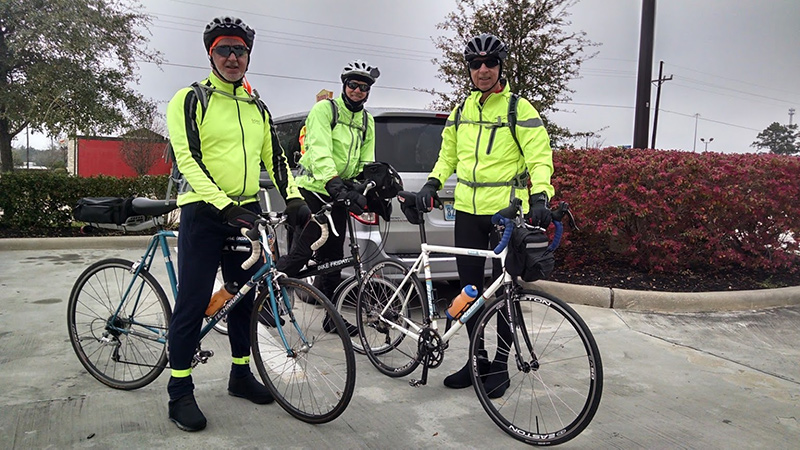 Bundled up against the cold. The guys tore off as soon as I took this; they wanted to get it done. It took them nine hours. 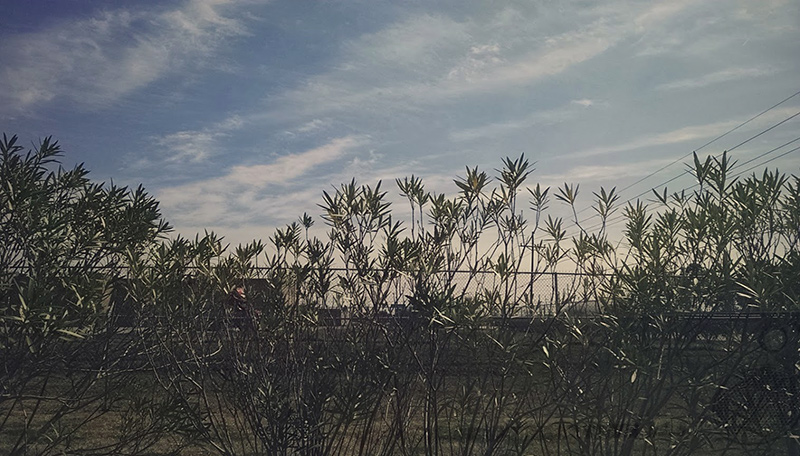 The view from Silvester’s parking spot. I thought it was a little pretty and a little ugly and I hadn’t taken many photos. The building at left is a Wal-Mart. 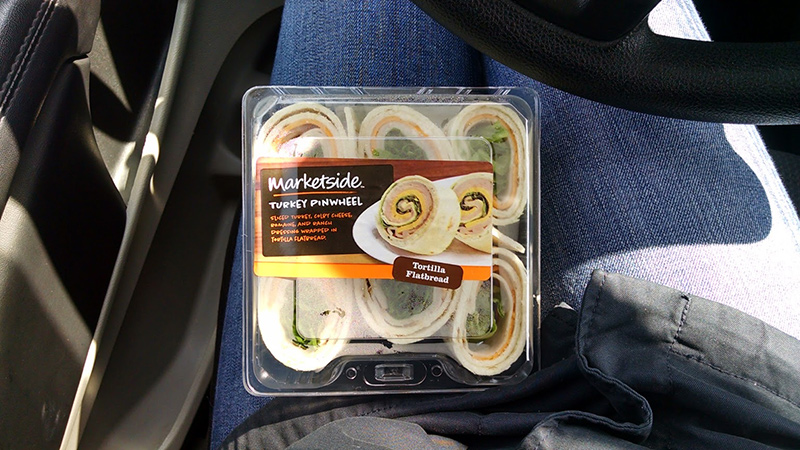 Today’s lunch. So when I saw this concept of wrap “bites” in the airport, I thought it was stupid and funny, yet appealing — it’s like having appetizers for lunch! But I guess it’s actually a standard thing now(?). Maybe if I’d worked in an office in the past few years roll-up lunches would seem normal to me. 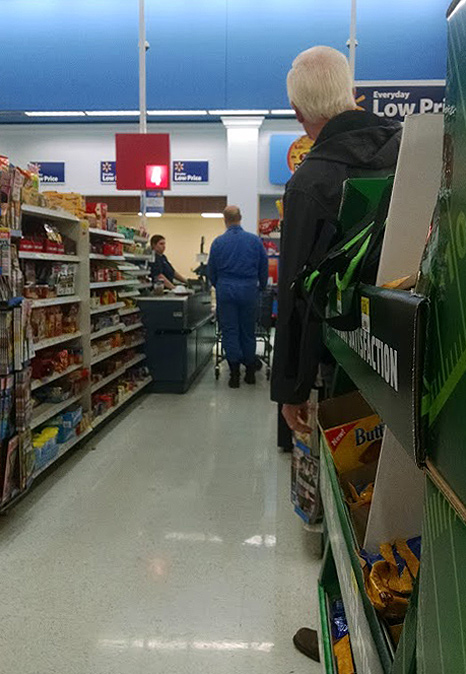 Dad walked into the frame of this photo of a guy wearing a jumpsuit at the last second. I thought at first that the jumpsuit was some kind of fashion statement, but it’s just his uniform. The photo still amuses me. 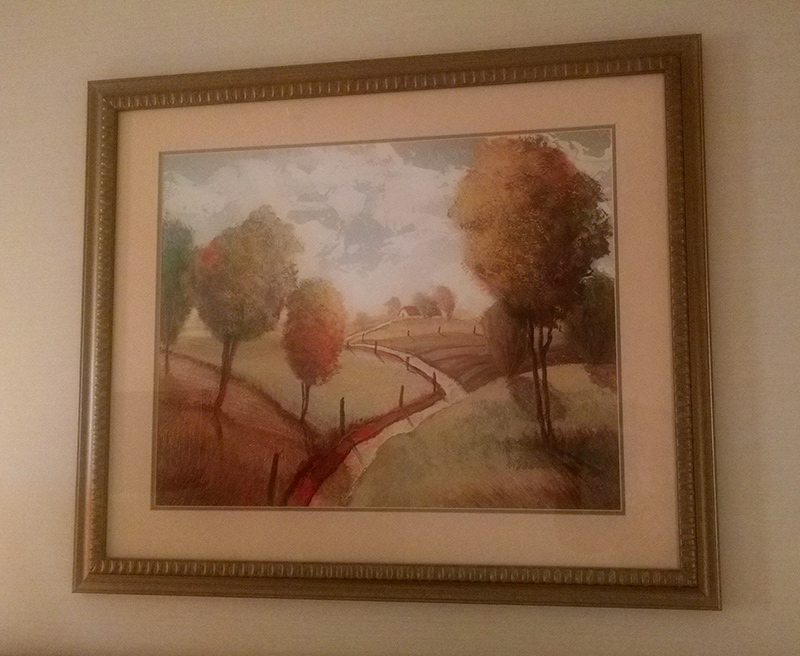 8/10. The style reminds me of something I’ve seen in indie animations; it feels fluffy, its slight blurriness giving it a sense of motion. It’s nearing the edge of being too colorful but doesn’t fall off the cliff. For a hotel painting it’s delightful. I feel like it’s inviting me in to that far-away farmhouse and I’m effectively invited in to my hotel bed.

6/10. It’s a little precious, but it’s real art. The style of the clouds feels incongruous; I keep being drawn to the sky when it’s not what I want to focus on.