Day 8: Biking from Bracketville to Del Rio, followed by driving some of Map 4 and an evening in downtown San Antonio, TX

Tim re-joined us on Friday October 11, our final day of riding on L3.  After Beth arranged for us to have a noon check-out time, we left the hotel with our bikes in Silver’s bay and drove to Bracketville, TX so that by biking west to Del Rio, we’d have the winds at our backs again.  We left the hotel around 7:15am when it was still dark, and somehow missed the turn that would have kept us on US 90 and on the right path towards Bracketville.  But we were glad we did get lost for a few minutes, because we came within about 20 feet of the International Fence, the closest we had ever been to the border and the fence.  Beth and Mark took pictures of it, so you can see it on their blogs.

Shortly after 8:00am, Beth dropped us off and we started our way on US 90 West towards Del Rio.  The ride was, fortunately, once again uneventful.  We again passed several ranches bordering the highway and I managed to take a picture of one of the more elaborate ranch signs, this one of the Clearwater Creek Ranch. 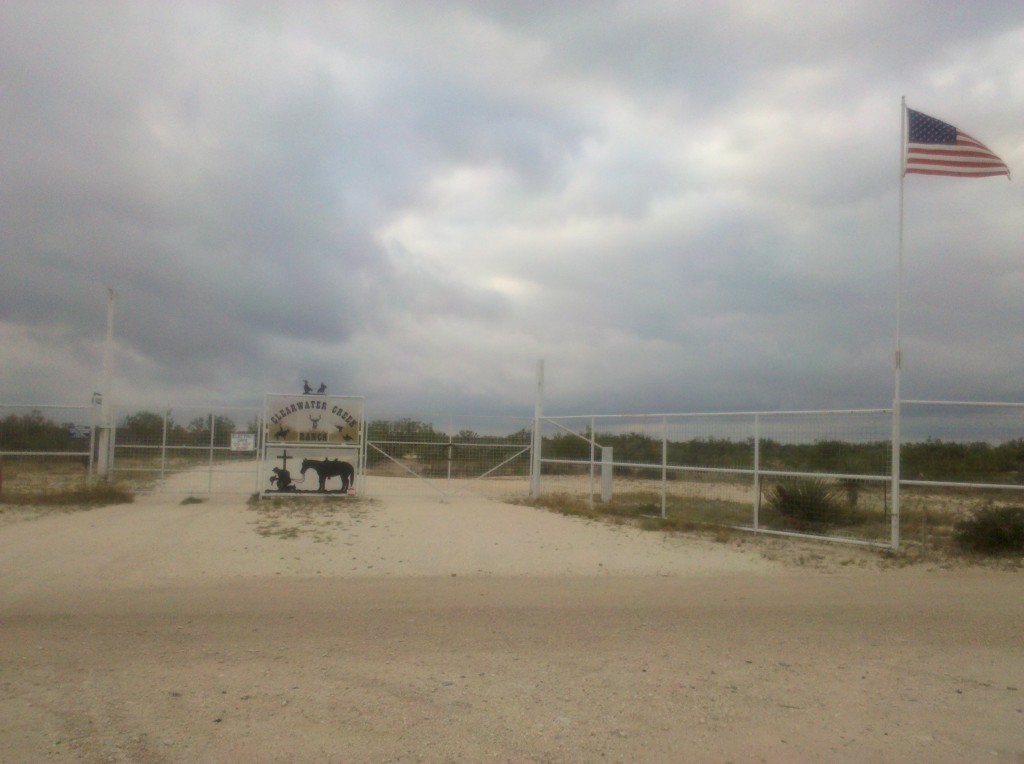 Clearwater Creek Ranch sign, Bracketville, TX. We passed dozens and dozens of ranches along US 90 between Van Horn and Del Rio, all of which had signs identifying them. This was one of the more elaborate ones. By the way, this ranch and its 2,000 + acres are for sale, in case you’re interested.

And here’s a picture of Mark and Tim on our very last rest stop of Leg 3. 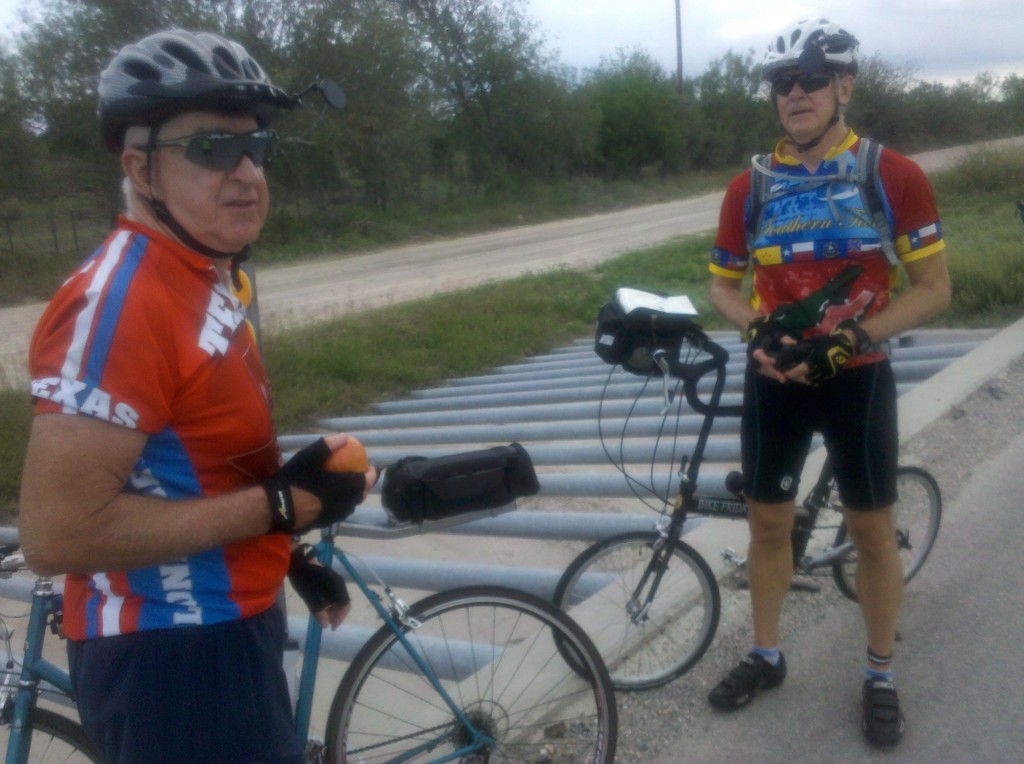 Tim and Mark on final rest stop of Leg 3. We stopped at a rain drainage culvert along US 90. The multiple parallel steel bars act as a grate to keep any large solid objects from entering the culvert with the water and clogging it up.

I also took a few final videos of Leg 3 while riding along US 90.  As you can see in the first one, the weather this day was overcast and the dark clouds actually did drop a few raindrops, but we were not caught in a downpour.  We were moving at a pretty fast pace at this point, a train passed by going in the other direction, and you get to see Tim passing me while I was taking the video.   I took the second video as we were passing by Laughlin Air Force Base.  Pilots were practicing take-offs and landings, passing over US 90 at a fairly low elevation, which was a different experience for us.  Hope you enjoy them.

We completed the 31 mile ride in a little more than two hours, arriving back at our hotel by 10:20am, gave each other congratulatory man-hugs, and then went to our rooms to disassemble, pack up our bikes, shower, dress, and check-out by noon, all of which we were able to do.

After that, we decided to drive a good part of the route in Map 4 of the Southern Tier.  We continued on US 90 east past Bracketville and drove into Uvalde, TX, where our Dad was stationed for several months during WWII.  We had planned to pay a quick visit to the John Nance Garner Museum in Uvalde (Garner was the Vice President to FDR during his first two terms and was a native of Uvalde), but as you can see from the photos I took there, the museum is closed for renovations.  Neither Beth nor Mark were too disappointed about that. 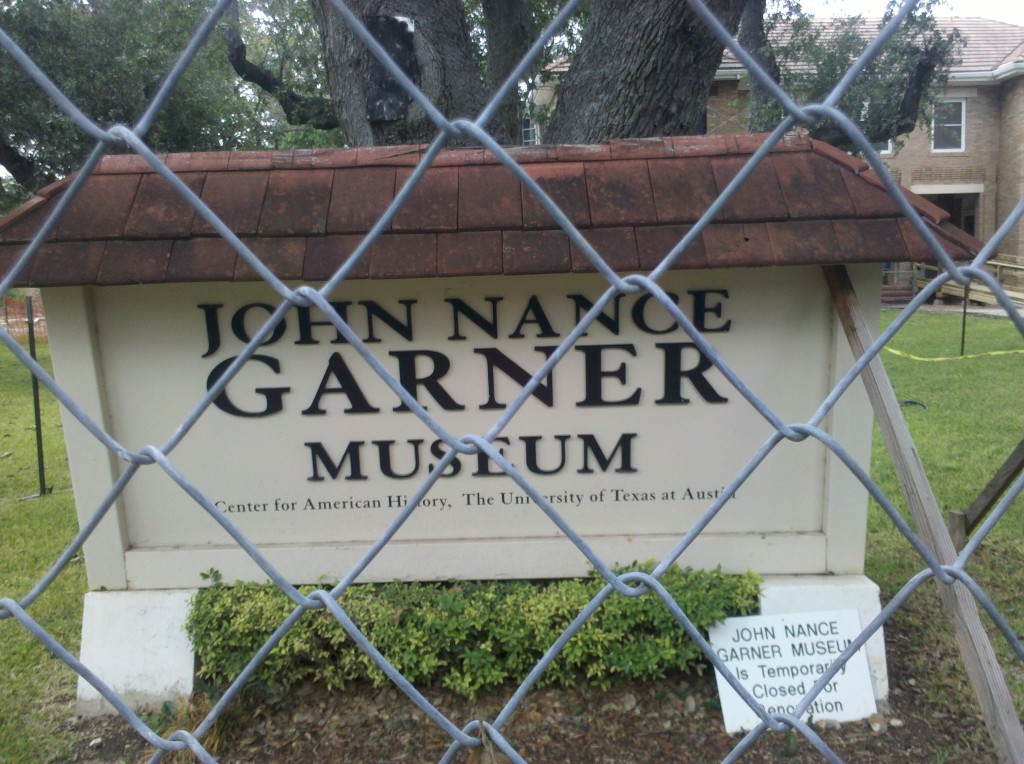 John Nance Garner Museum sign in Uvalde, TX. The fence and the small sign at the bottom right let us know it was closed. Beth and Mark were not overly disappointed. 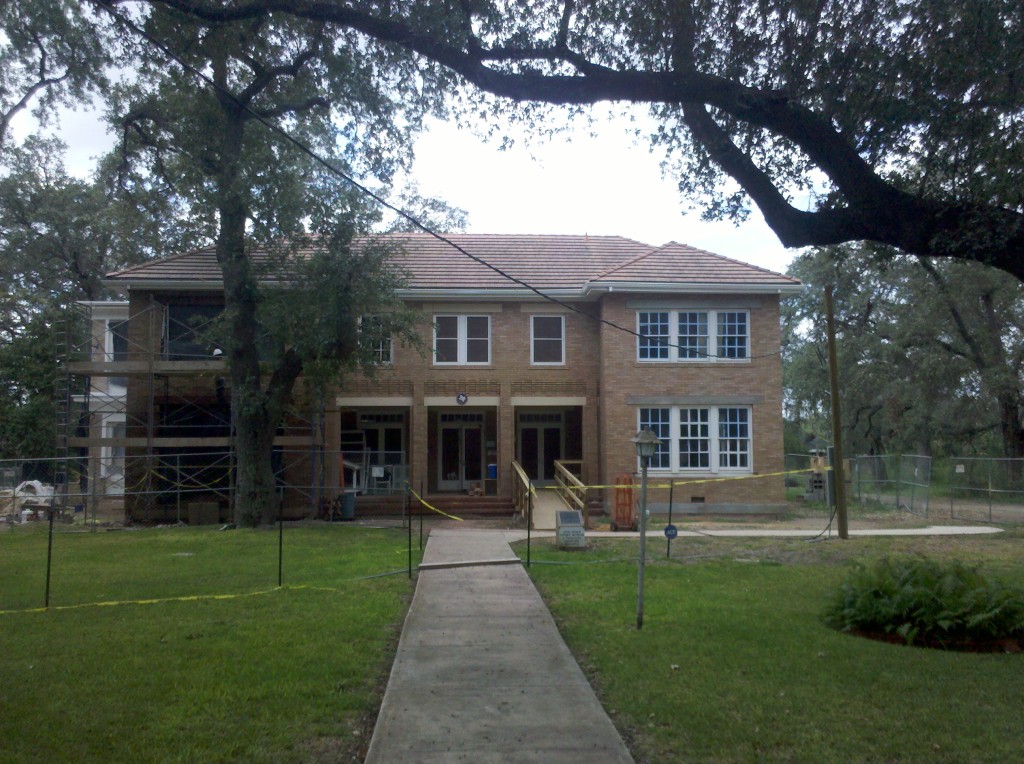 Photo of the John Nance Garner Museum in Uvalde, TX. There were lots of nice homes in Uvalde, which bills itself as Tree City, USA.  Indeed, there were many trees planted there and several were growing right in the middle of streets.

The drive along the Map4 route was very hilly, since it is part of the Texas Hill Country.  The roads were very narrow and mostly free of any traffic, but there are also lots of twists and turns and with a speed limit of 65 mph, I think cars might be right on top of us before we could have a chance to react.  So I am not at all opposed to Tim mapping out an alternative route to at least some of the Southern Tier Map 4, even though it is not his turn to plan the route.  We’ll see what he comes up with – we have a few moths to decide on the route we’re going to take in early March 2014.

We made it to our hotel near the San Antonio Airport around 5:00pm, had a few beers and snacks, and then Tim drove us to downtown San Antonio for a visit to the Alamo and the River Walk. 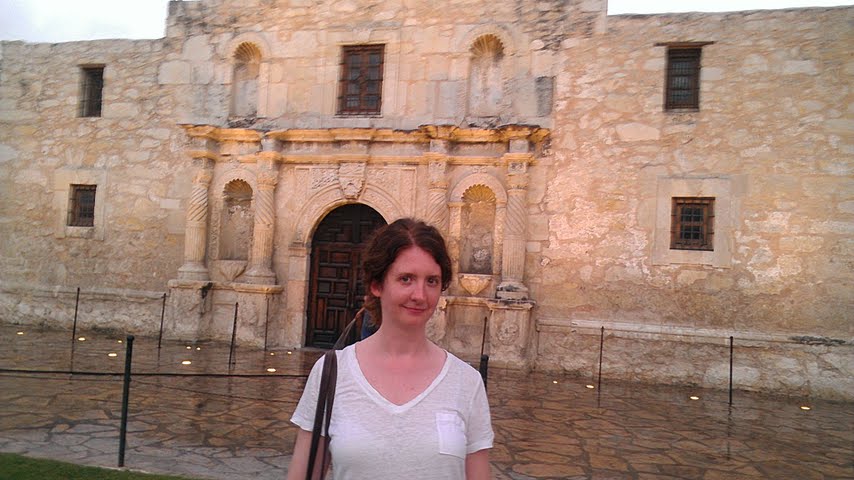 Beth in front of the Alamo, San Antonio, TX. 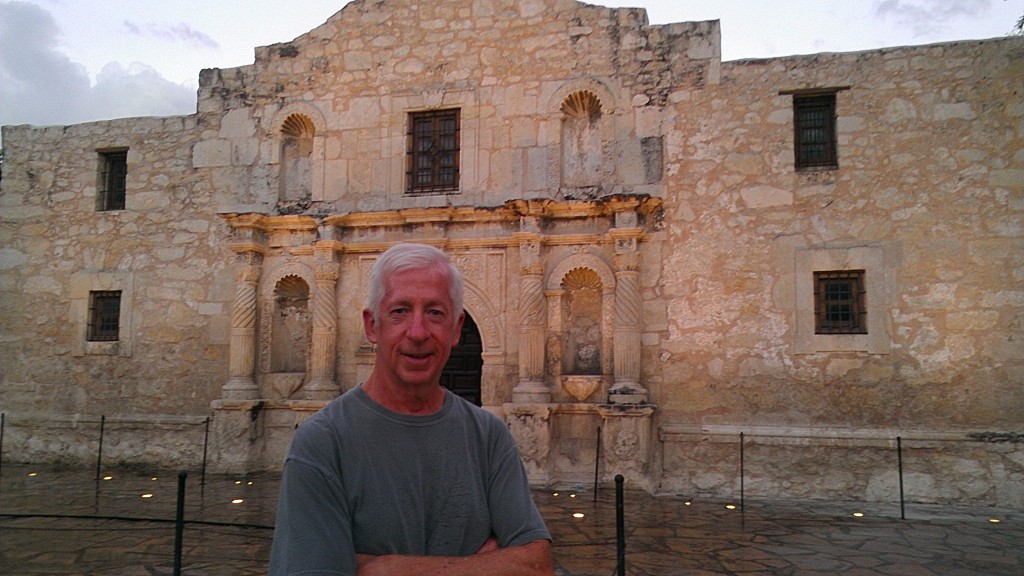 Brian at the Alamo.

After an outstanding steak dinner at the Saltgrass Steak House on the River Walk (great choice Tim!), we finally managed to get Beth to at least try on a cowboy hat, even if we couldn’t interest her in letting us buy it for her. 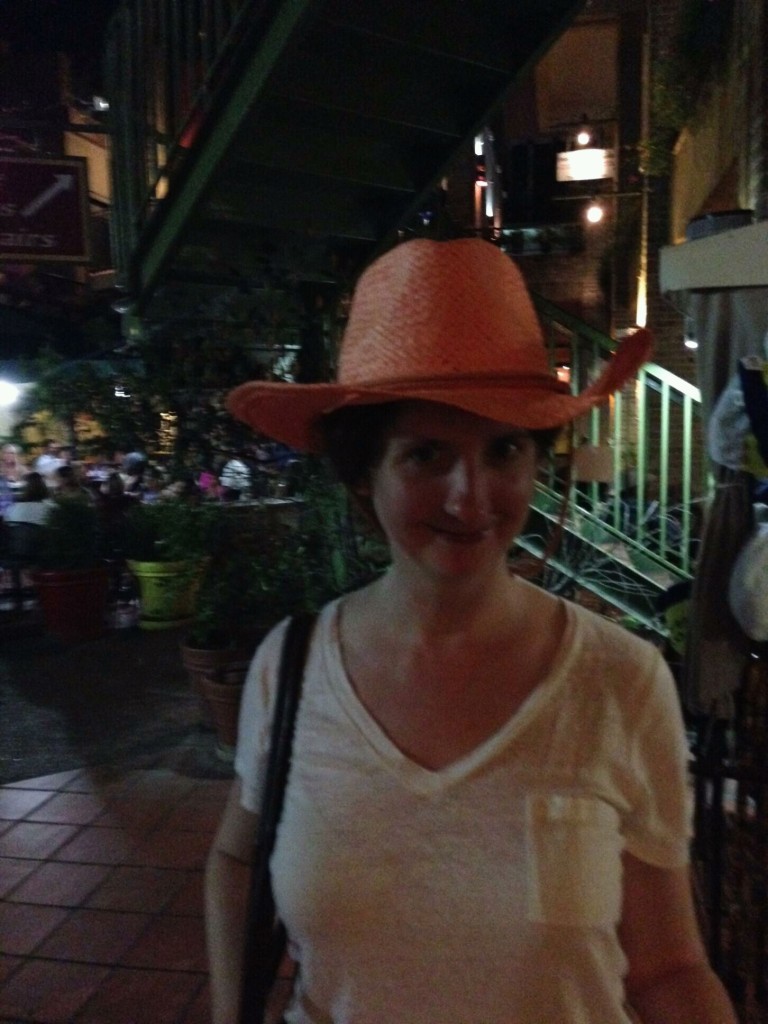 Beth posing in a cowboy hat on the River Walk in San Antonio, TX. Maybe on our next leg, we’ll convince her to buy one. 🙂