At breakfast this morning, Tim told Mark and me that the cold he’s been fighting the past few days has finally gotten the better of him and so he wouldn’t be riding with us this morning.  Mark and I decided to ride anyway, but to make an easy day of it by riding with the wind instead of against it.  We decided to ride from Del Rio back to Comstock, a distance of only 30 miles, heading west with the wind, instead of from Comstock, where we left off yesterday, to Del Rio heading east against the wind.  We missed Tim on our ride today – it was uphill most of the way, but it was only 30 miles, so it went relatively fast.

The first image I took a photo of today was of the flags of Texas and the U.S.  The flags were straight out and blowing in the direction we decided to travel, so it was a good omen.  Winds today were 15-20 mph with gusts up to 30 mph out of the east.  It would have been another hard ride if we opted to go against them, but we didn’t. 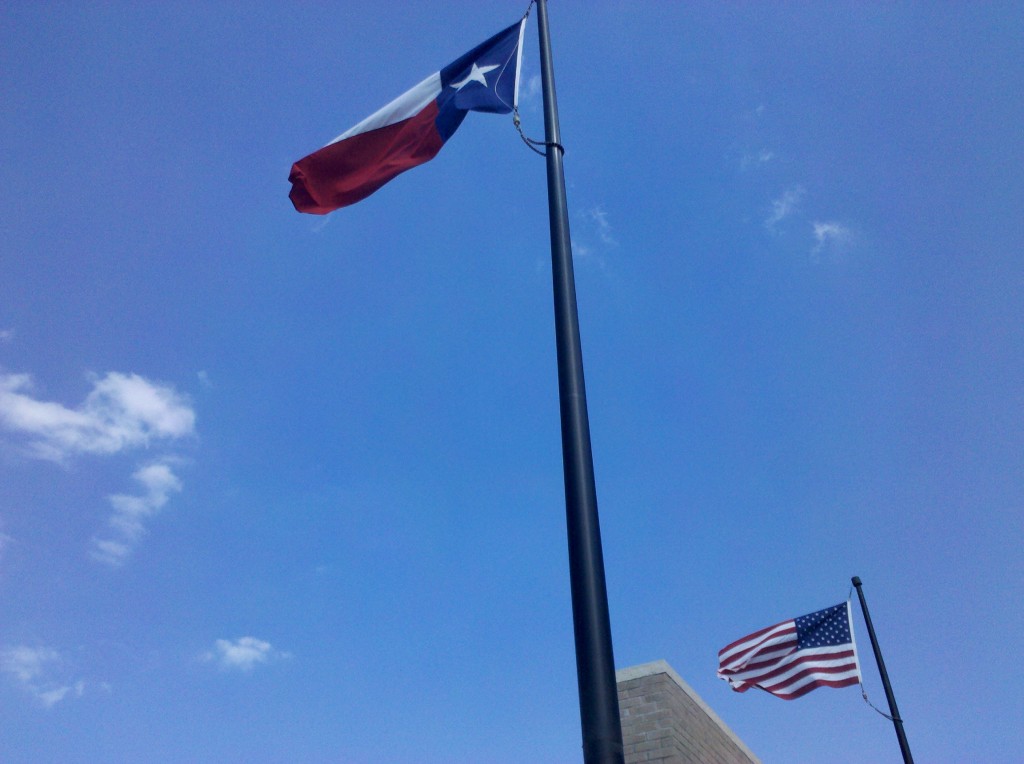 Texas and U.S. flags blowing in the direction we rode today. Often in Texas, the state flag is somewhat larger than the U.S. flag (since Texas was a republic before it was a U.S. state), but these flags look to be the same size.

Just before we crossed over the Amistad Reservoir, Mark and I stopped to take a few pictures of this beautiful body of water.  It’s right next to a dam on the Rio Grande, and it fed by the Rio Grande and the Pecos Rivers.  It looks to be very high right now – we didn’t see any high water marks on the shore above its current level. 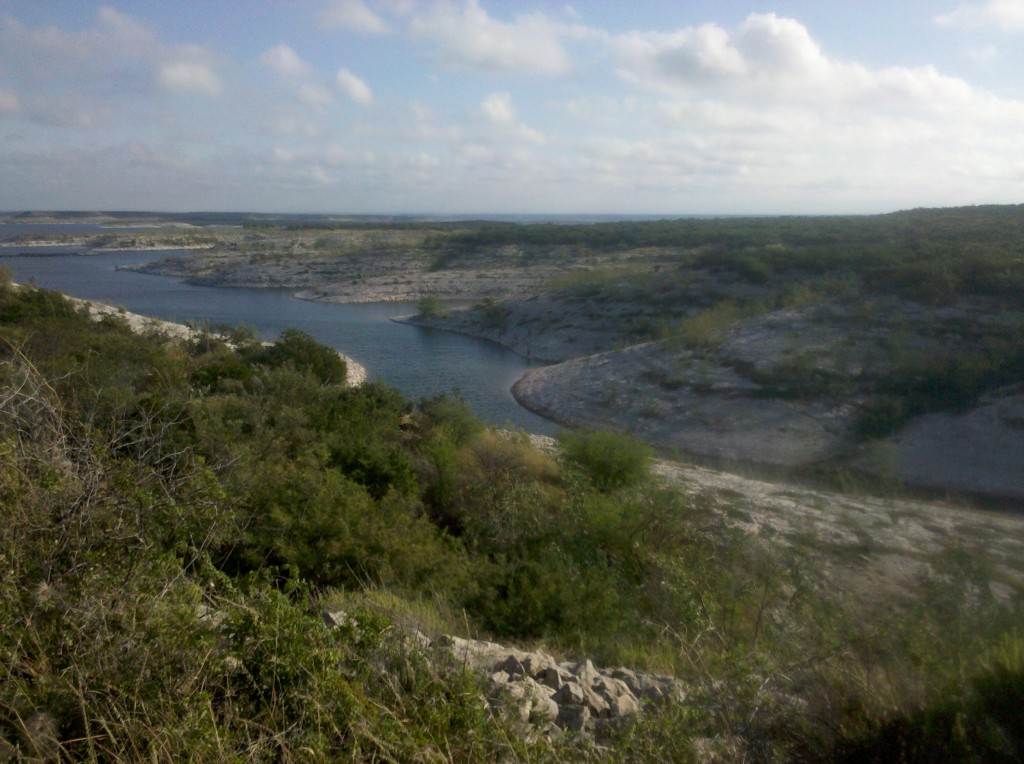 Close up view of the Amistad Reservoir on the east side along U.S. 90. 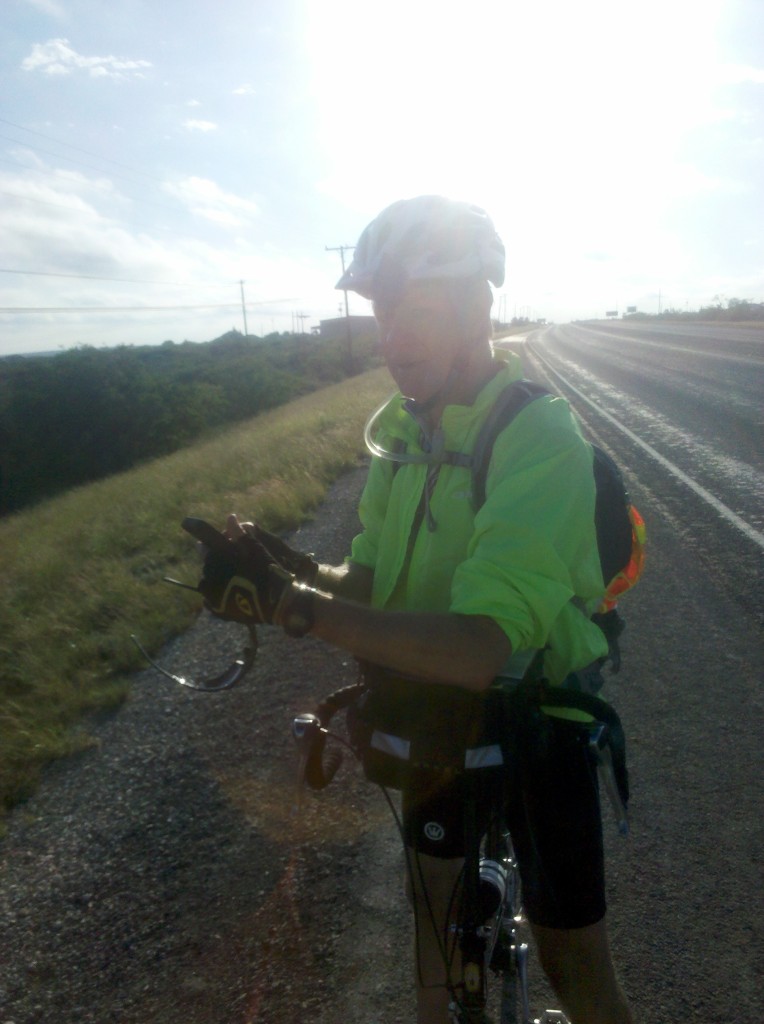 Mark taking a photo of Amistad Reservoir. It was another beautiful day, but we could feel the humidity today.

Mark and I were both a little concerned about crossing over the Amistad Reservoir on U.S. 90, since it is only a two-lane bridge with next to no shoulder whatsoever! But we were in luck, and also crossed it very early in the day.  Most of the traffic was headed in the opposite direction, towards Del Rio, while we were headed away from Del Rio.  So it was relatively easy, plus traveling with the wind allowed us to traverse the 2-mile long bridge very quickly.  But see for yourself in this next video.

Once we crossed the bridge, we made a quick stop to phone Beth and ask her to meet us in Comstock at 11:00am.  We also took a few photos of the roadside vegetation.  Bet you can’t guess what I took some photos of …..  🙂 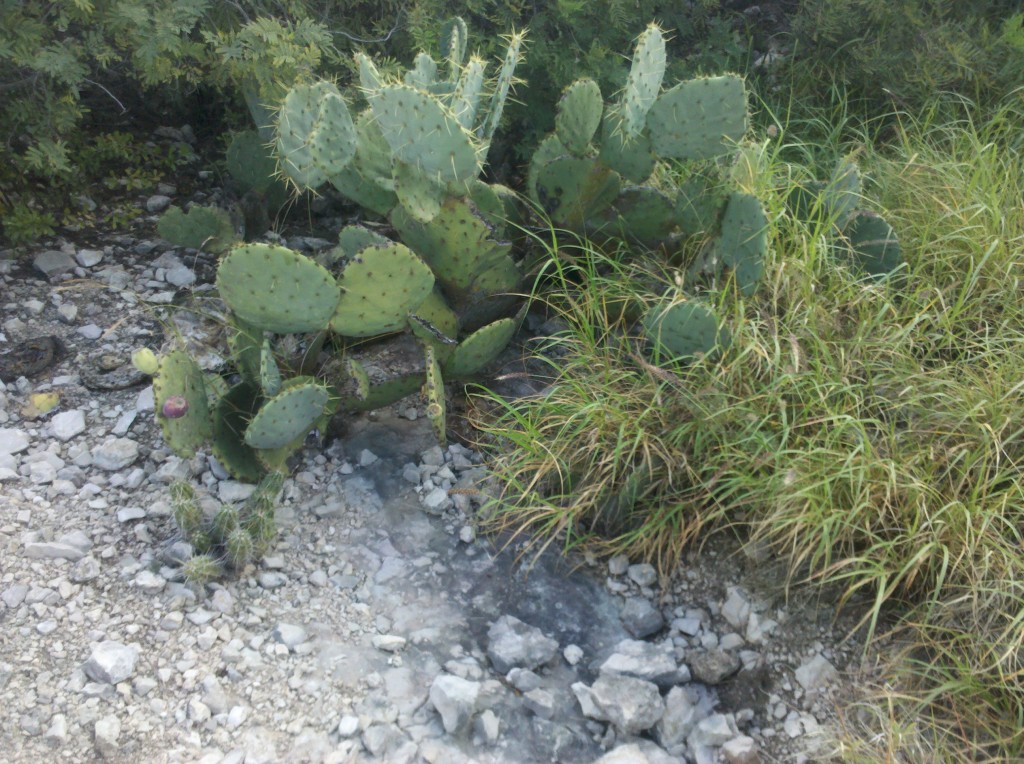 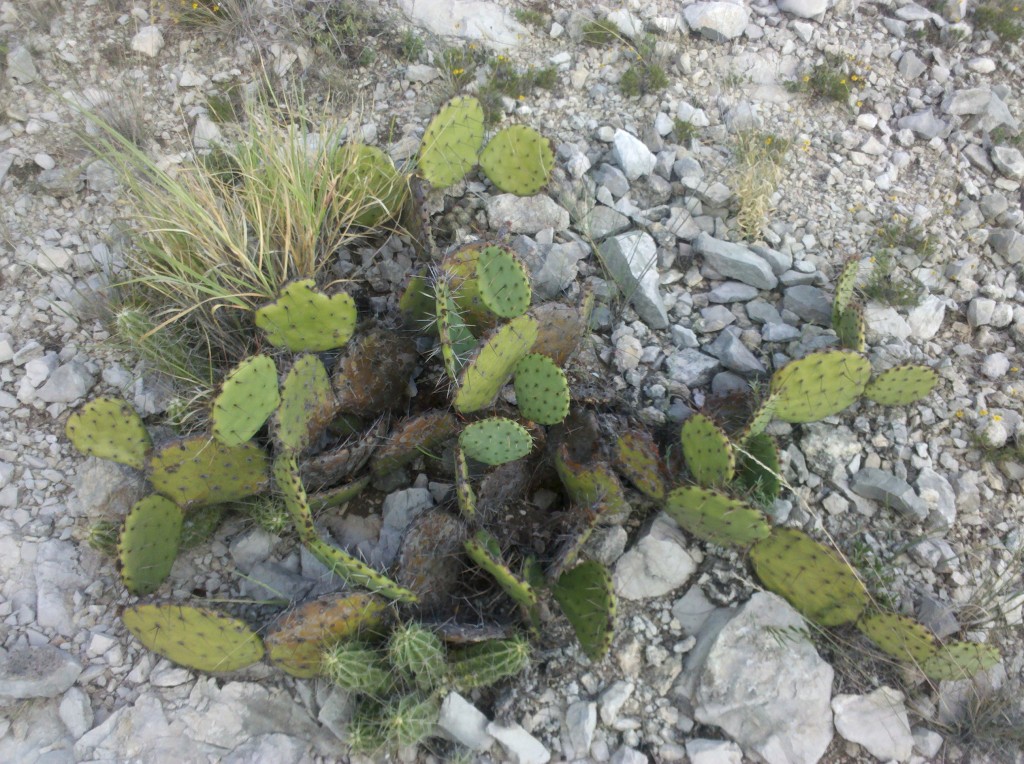 Prickly pear cactus photo #2 of the day. Mark thinks these may be of the Teddy Bear variety and he may be right about that.

The only unforeseen event of the day was that Mark got another flat tire, his third of this trip.  And this time if was my son Chris coming to the rescue.  He recommended that I take along a pump that he personally liked, and so I did.  Previously we had been using Tim’s pump but since he wasn’t with us, we used the pump Chris purchased for me and it worked fine!  So thanks Chris!

While we were changing the flat, the flies descended on us, finding us in less than one minute.  Mark and I agreed that the flies and other insects are the only thing about Texas that we’re not fond of – everything else about Texas (the history, the scenery, the courteous drivers and friendly people in general) have been great!  But the insects are another story.  They remind me of when my Dad was stationed in Texas during WWII and my Mom came down to live with him for a while.  I’m sure my sister Denise was with them also.  I remember my Mom telling me that the Texas insects were so pervasive, that aside from canned goods, every other food item had to be kept in the ice box to keep the insects from getting to it.  I can really understand why now.

But even with losing a little time changing the flat, we still made it to Comstock in time for Beth and Tim to pick us up at 11:00am.  Then it was a quick drive back to Del Rio, some relaxation in the pool and the hot tub, followed by a real Texas barbeque lunch, which was outstanding!  Beth, Mark and I decided we were going back there for dinner tonight! 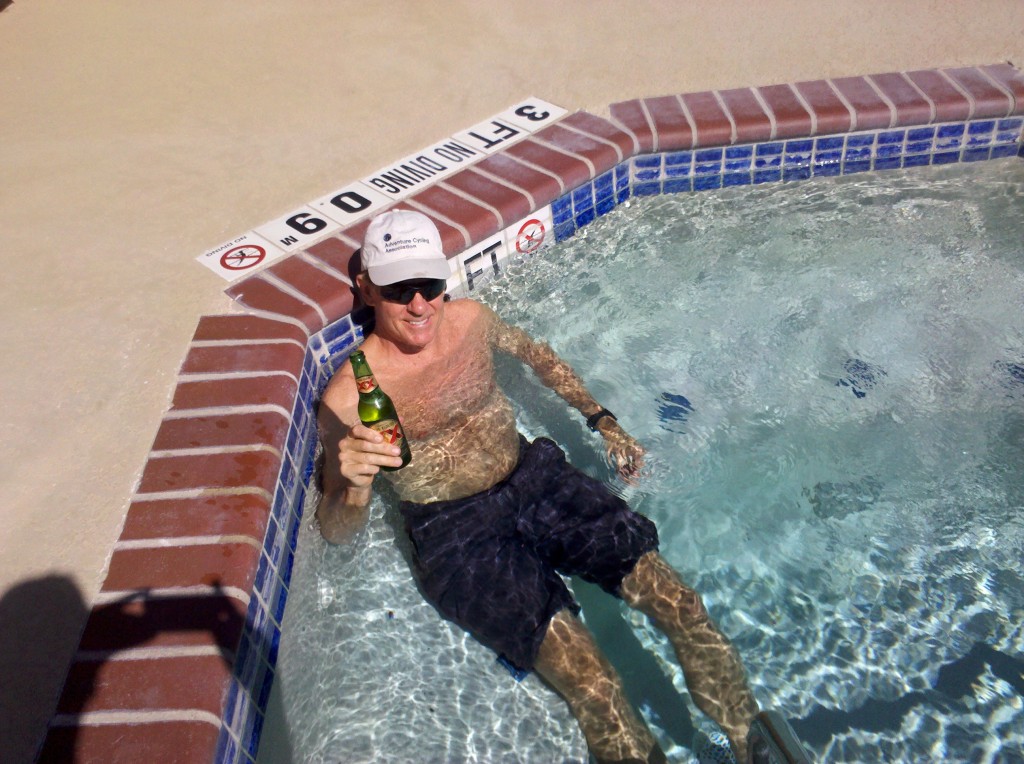 Mark enjoying a brewski at the Hampton Inn hot tub, Del Rio, TX. Map 3 of the Adventure Cycling Association Southern Tier Route is now complete! We’re going to let Tim decide, based on how he feels on Friday morning, whether we ride tomorrow or not.

One comment on “Day 7: Del Rio to Comstock, TX – Riding is fun again!”