Days 1 and 2: Back in the Saddle Again

I woke up at 3:19 a.m. and figured I might as well stay awake, as I wanted to leave a little after 5. Blah blah flights were fine. On the second one, from Houston to El Paso, I talked a little with a guy who works as a management consultant for Werner Ladders, a company I’d never heard of that is responsible for most of the ladders people use. He was rich in a low-key way. It’s usually easy to tell when people are rich because they seem more relaxed than other people. And because they tell you about the property they own in Switzerland. Also he was originally from California. Sometimes I confuse rich people with Californians, but this guy happened to be both. He was very nice, in case I’m implying that rich people aren’t. Anyway, you might want to invest in stock from Werner Ladders, because I hear it’s climbing.

My main objective upon arriving in El Paso was to sleep. I took a sort-of nap until Dad called and told me I should leave to pick everybody up in Fort Hancock. Then I drove them back to the hotel and took another half nap while the guys were in the hot tub. Then we went to an okay Mexican restaurant where I looked (and felt) tired while drinking a large but weak margarita. Then we went to a depressing Barnes and Noble and I bought a couple of notebooks. Then I slept. 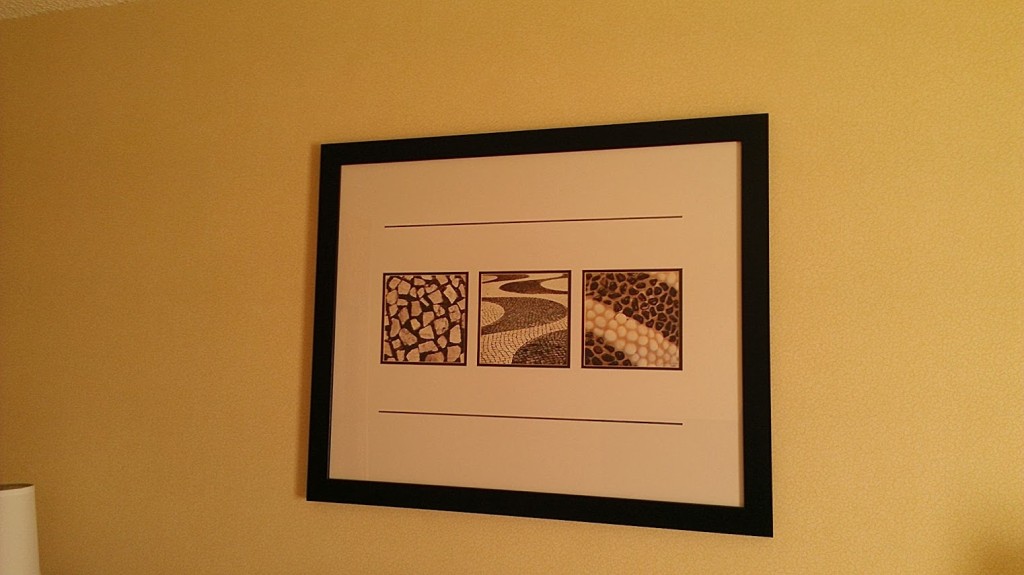 4/10. “Let’s frame some stock photos!” I don’t enjoy looking at this at all. And the lines in the matte make it more offensive.

I woke up at 3:50 a.m. But it was actually 5:50 Eastern time, so not as bad I guess? I dropped the guys off in Fort Hancock. It was chilly but sunny and everyone was in pretty good spirits. 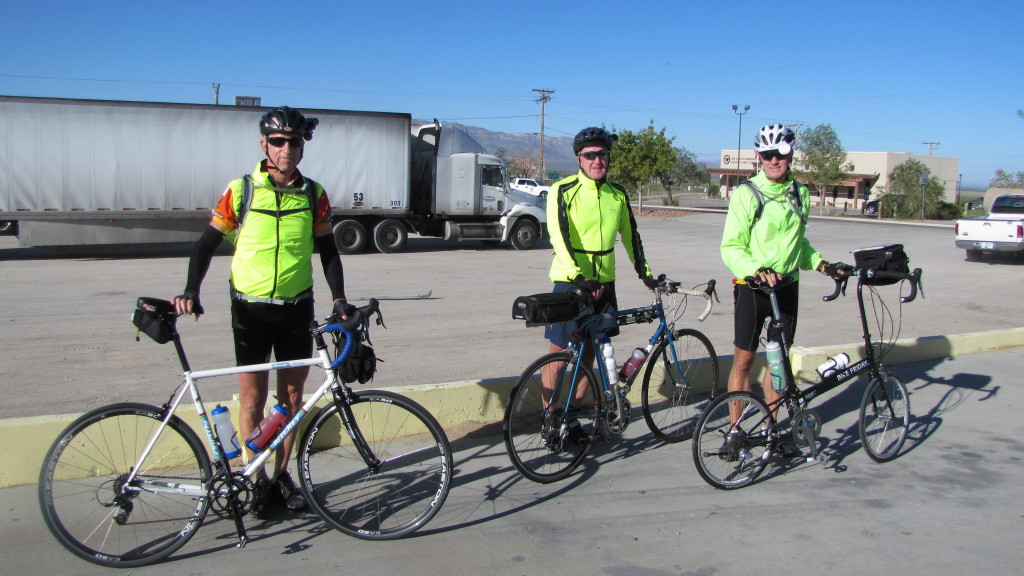 Ready for the long ride to Van Horn

Then I headed back to El Paso to while away some hours. First stop: the Cielo Vista Mall. I don’t get to go to malls very often and sometimes crave their reliably bland ambiance. Indeed, the most striking feature of El Paso to me is its blandness — it feels like the result of averaging all American cities together. Cielo Vista met all of my expectations.

As I wandered around looking for an ATM, a guy at a kiosk gave me a small piece of soap and said, “This is for you, it’s organic soap,” and then took it back and said, “Let me give you a paper towel to put it in,” and then took my right hand and said, “Will this make anyone jealous?” and I said no, and before I could process any of this he started buffing one of my thumbnails. He asked my name and asked about four times if I work with chemicals (I don’t take great care of my hands but his disbelief started to get insulting), and he used some magical block on my nail and finally had me compare my treated thumbnail to my untreated thumbnail and said, “Betty, do you like it or do you love it?” I said I liked it because I was pissed about his sales methods. But the treated thumbnail was much smoother than before and was remarkably shiny. He said, “We have a special offer for you today,” and that’s when I squirmed out of his grasp, organic soapless, telling him I’d think about it.

And I did think about it and I decided that I needed one of those magical nail buffers, because I couldn’t stop running my fingers over my new nail. But I didn’t want to buy anything from someone who had ambushed me. But if he hadn’t ambushed me I wouldn’t have known that my nails could feel so wonderful. But Amazon sells the thing the guy was using for about $3 and the first comment is from someone who says not to get these from the mall people, so I feel a little better.

The mall visit was just to kill some time; my real mission was to acquire a pair of cowboy boots. El Paso is, according to itself, the boot capital of the world. I did some research and learned about a factory outlet for Lucchese, a luxury boot brand. Johnny Cash wore Luccheses, and I try to emulate Johnny Cash whenever possible.

In the store, I tried on the first pair of boots that caught my eye in my size and soon realized I was going to have some trouble getting out of them. I tugged awkwardly with no success, and eventually a salesman came over and yanked them off of me, almost pulling me off of the bench, as other customers looked on and laughed. Then I went up half a size and easily found my new boots. They’re a little more ornate then what I usually go for, but I think they’re going to fade really nicely. And maybe sometimes I feel ornate! The boots are a birthday present from the guys (at least until they find out how much they cost). Thanks, guys, you’re the best! 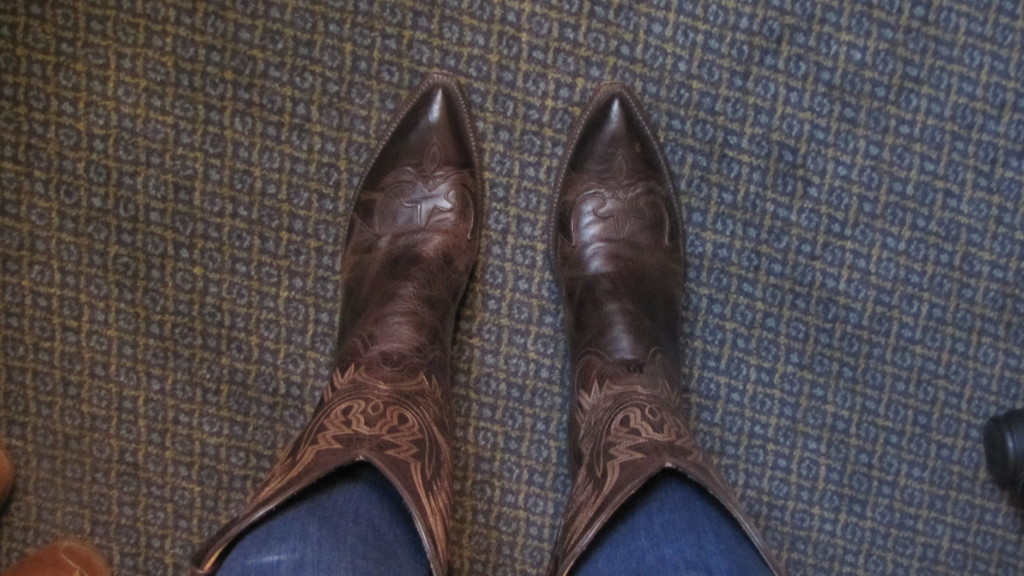 Next objective: lunch. I’d been seeing signs for Whataburger on the highway and was pretty sure I’d never had the eponymous burger before, so I Google mapped one and had Kiri (Android’s version of Siri) guide me there. I ended up missing the turn, though, and had to circle around to get there. I saw the big “W” sign and pulled into the lot, deciding to bypass the drive-thru for a more comprehensive Whataburger experience. When I walked in I was surprised at how crappy- and old-looking it felt, with its rundown pastel pink and blue decor. This was a fast food place not excited to be itself. I ordered a chili cheeseburger for $2.15 and had some insightful observations while waiting for it to be made:

I confirmed what you already know when I got back to my car: I was not at Whataburger. I was actually at Wienerschnitzel. I had been schnitzeled. 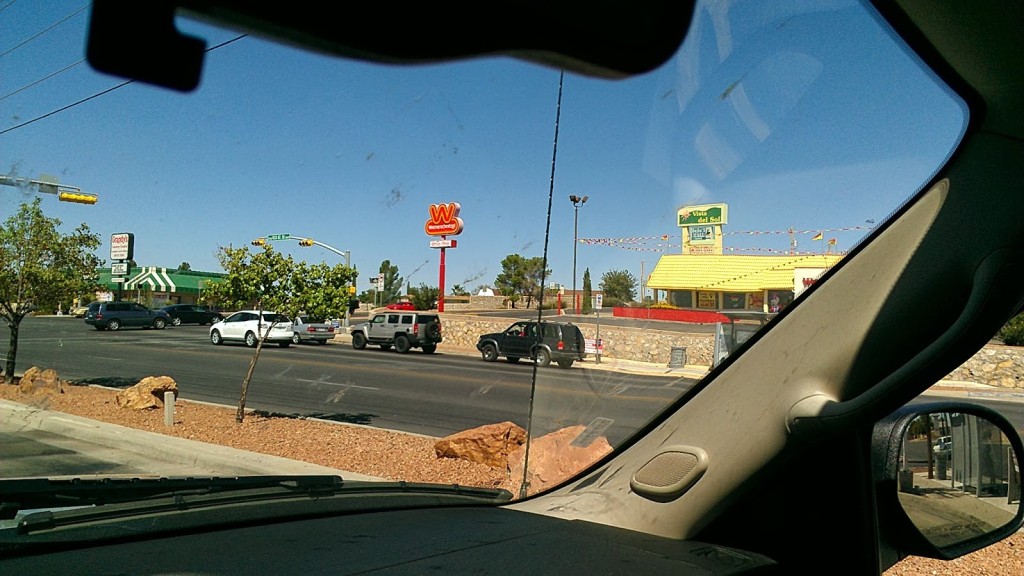 Okay, this W looks nothing like the Whataburger W. But I was hungry!

I took a few bites of the chili burger and said out loud, “You don’t have to eat this.” So I wrapped it up and drove over to my intended destination. The Whataburger was way better than the Mistake-a-burger. But I saved the half-eaten one and gave it to Dad later. He thought it was great.

I was happy to be in a pickup truck (more on the truck later) for the two-hour drive to Van Horn, because its threatening grille and hulking size make people move out of my way. I saw the guys on a frontage road about 15 miles away from town and knew they wouldn’t be long.

The check-in guy at the charming Hotel El Capitan was sassy and urbane. I kind of regret not getting his back story but I wasn’t feeling chatty and I don’t think he was, either. 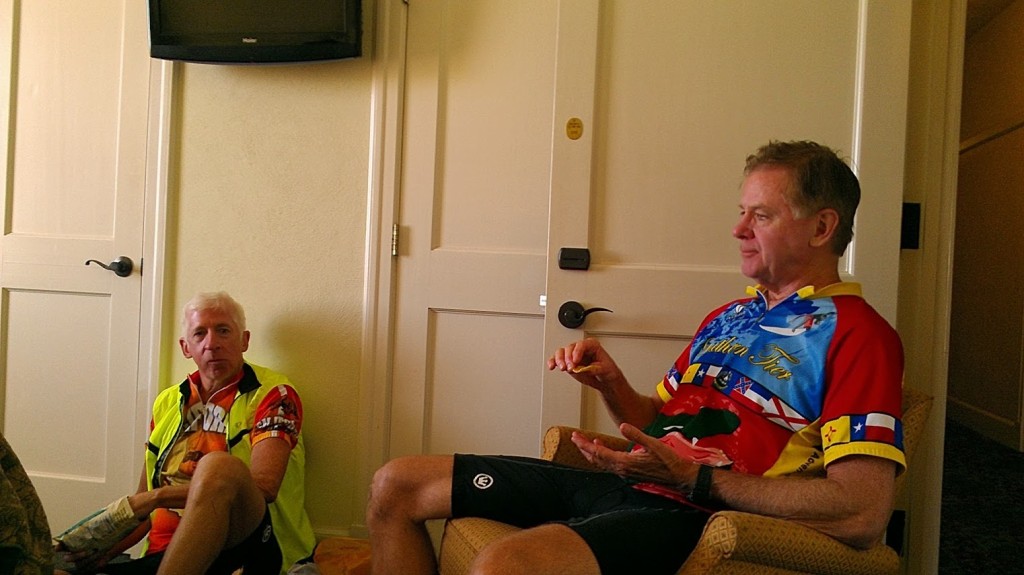 Snacking it up in Tim’s room after the ride

We ate a nice dinner at the hotel, then Dad and I went to the dollar store for some supplies, then I helped some people relearn how to blog, then bed. Tomorrow (or today, since I’m writing this so late): Marfa, the Brooklyn of West Texas. Everywhere is the Brooklyn of somewhere these days. 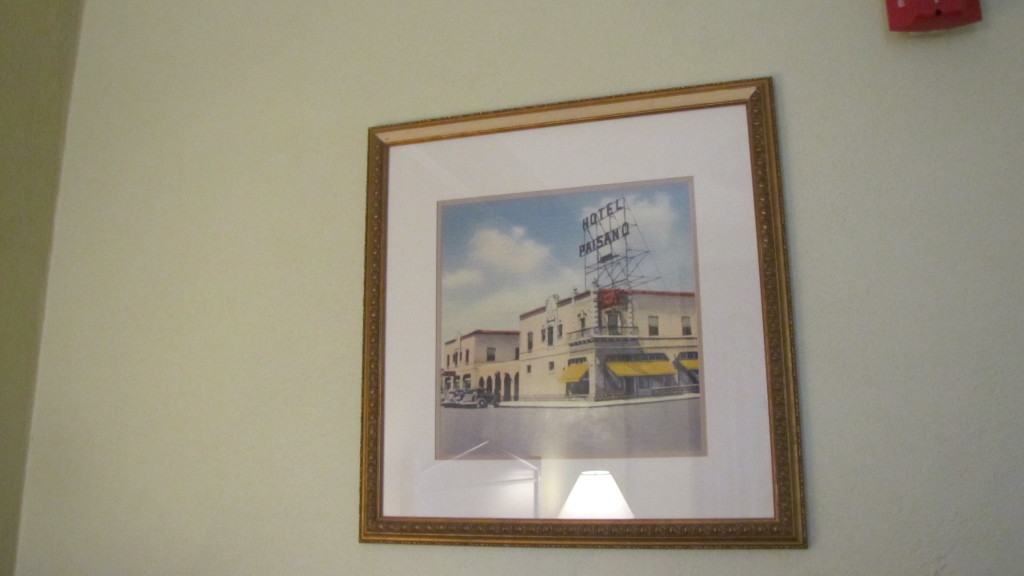 Sorry for the bad photo.

6/10. The Hotel Paisano is the owner’s sister property in Marfa. This seems to be an old photograph with some Photoshop filters applied. It’s appropriate and pleasant enough to gaze upon, though I wish the shot were framed with more space above the sign. The actual gilt frame is especially nice.

One comment on “Days 1 and 2: Back in the Saddle Again”