Day 6 – Silver City to Kingston, NM – up and over the Rockies!

Posted by Brian on March 7, 2013
Posted in: Uncategorized. Leave a Comment

We started this day pretty bundled up, since it was only 31 degrees Fahrenheit with a wind chill that made it feel like 21 degrees.  But we warmed up quickly as we started to climb out of Silver City.  We left NM 180 behind and got onto NM 152 shortly out of Silver City.  NM 152 was originally constructed in the 1930’s as part of a Works Progress Administration project and it is a beautiful road with very little traffic.  Silver City is at an elevation of 5,938 feet and Kingston is at about 6,200 feet, but first we needed to climb up to Emory Pass, which is at an elevation of 8,228 feet.  So we need ahead of time that it would be challenging, even though our total mileage for the trip was about 45 miles.  I took a few photos while on the ride, but I was mainly focused on completing the day’s ride, which had been on my mind for several days in advance.  Here are some photos to give you an idea of what we saw on this ride. 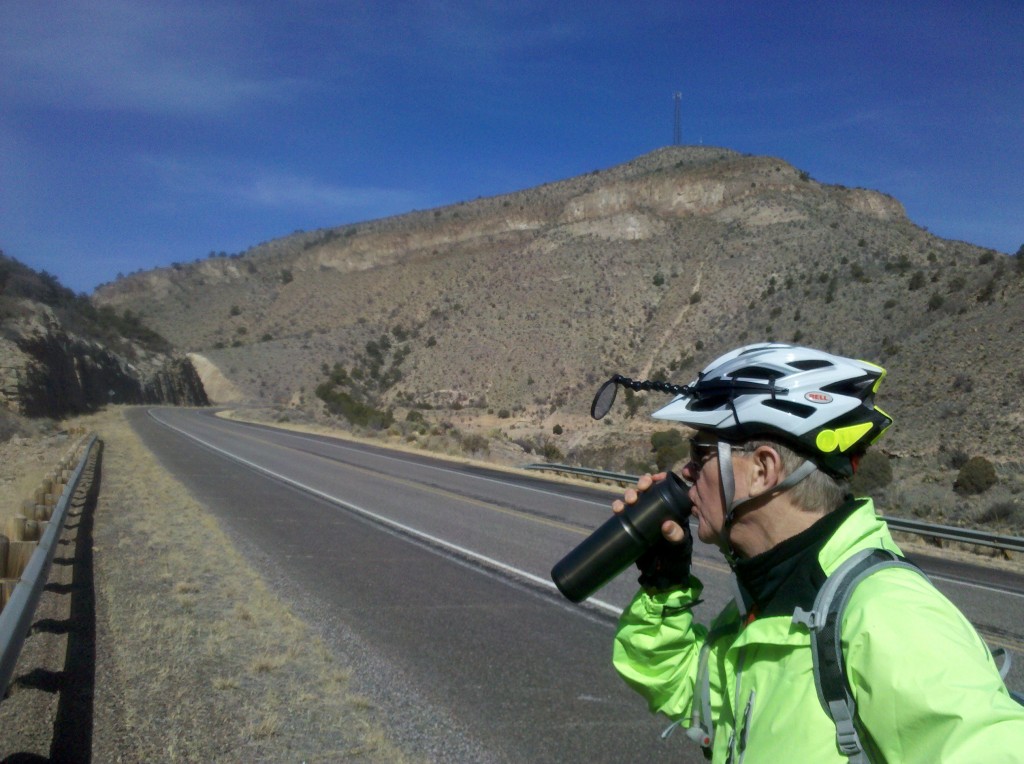 Mark drinking coffee at first break of the day. 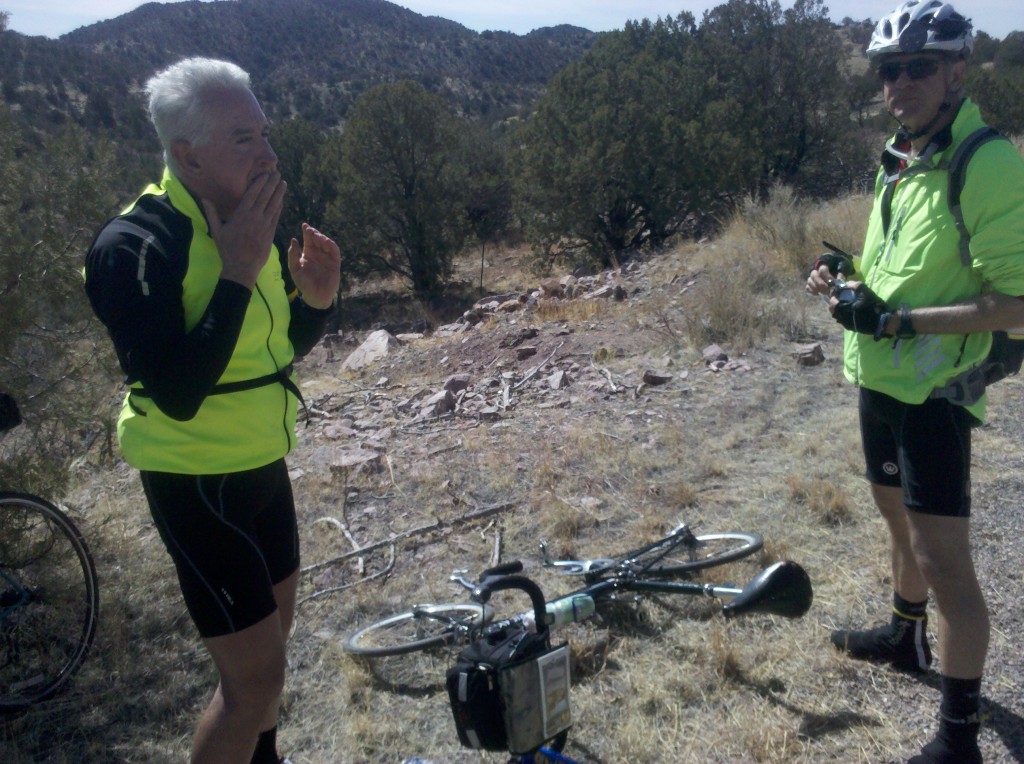 Tim and Mark at second break.

This was the first day using the new seat that Mark, Tim and Beth had strongly encouraged me to purchase the previous afternoon when we were in downtown Silver City.  I was really glad they were all so insistent, because the new seat actually made this ride possible.  We climbed almost the entire day, using switchbacks that had been carved into the mountain to make the grade tolerable for motorists.  I’m pretty sure the transportation engineers that designed the road were not really thinking of cyclists, but the grade is fine for bike riders also.  My one video of the day was when Beth met us exactly as planned at 12:30 p.m. along NM 152.  Beth had told us she was going to work out in the Exercise Room of the Silver City hotel and then go shopping for contents of the meal I would be cooking that evening, leaving the hotel around 10:45 aa.m.  By checking the driving directions on Google Maps for our destination,  she was confident that she would catch up to us at about 12:30 p.m. and she was right on target.

After meeting up with Beth and filling up on all our fluids and snack items, Beth continued on her way and we did too, with about another 6 miles or so of climbing ahead of us.  About the best I could do climbing the mountain was 4 miles per hour, and I told myself that if the grade got any stepper so that I slowed down even more, I would just get off the bike and walk, since my walking speed would be about the same as my biking speed.  But fortunately that did not happen and I never needed to walk.  It felt really good to make it to the top of Emory Pass, at which point I took some photos. 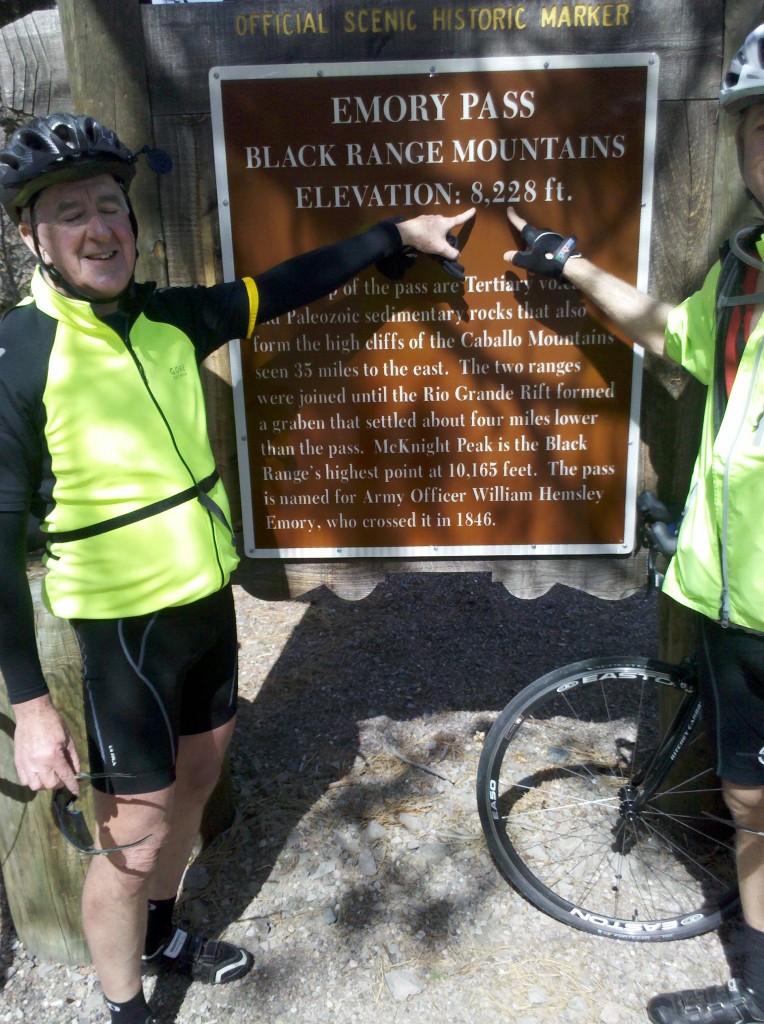 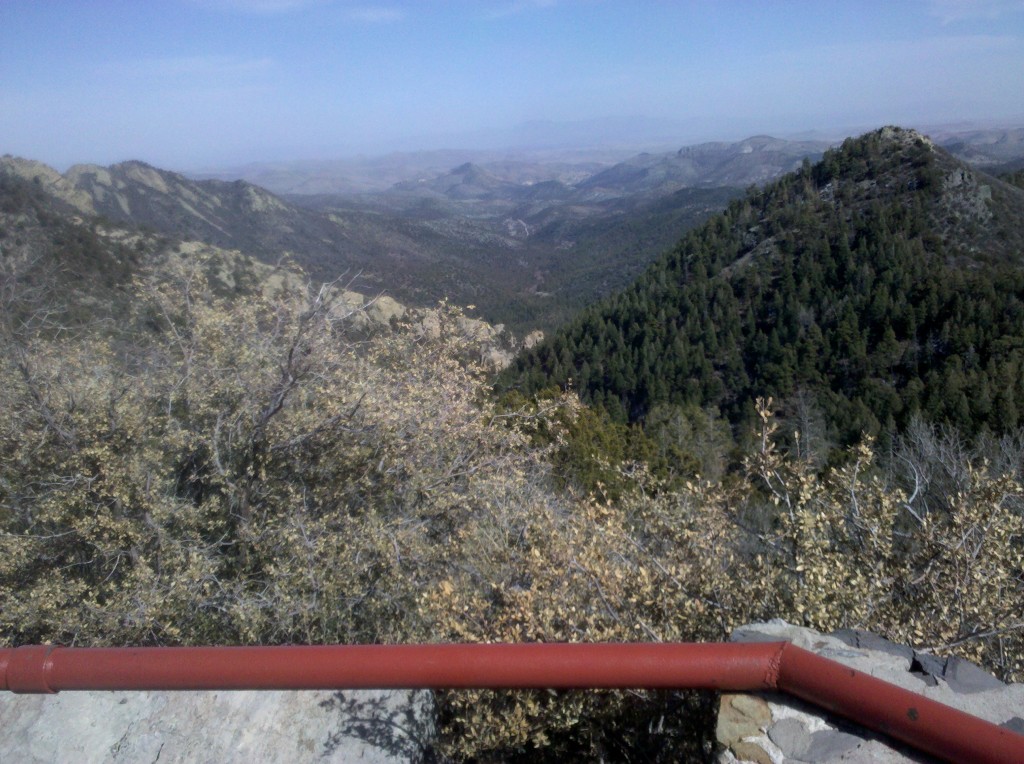 View of Kingston, NM from Emory Pass lookout.  The road in the center of the photo was our destination for the night.

Here is another view from the Emory Pass lookout.  The white spots on the mountains are snow. 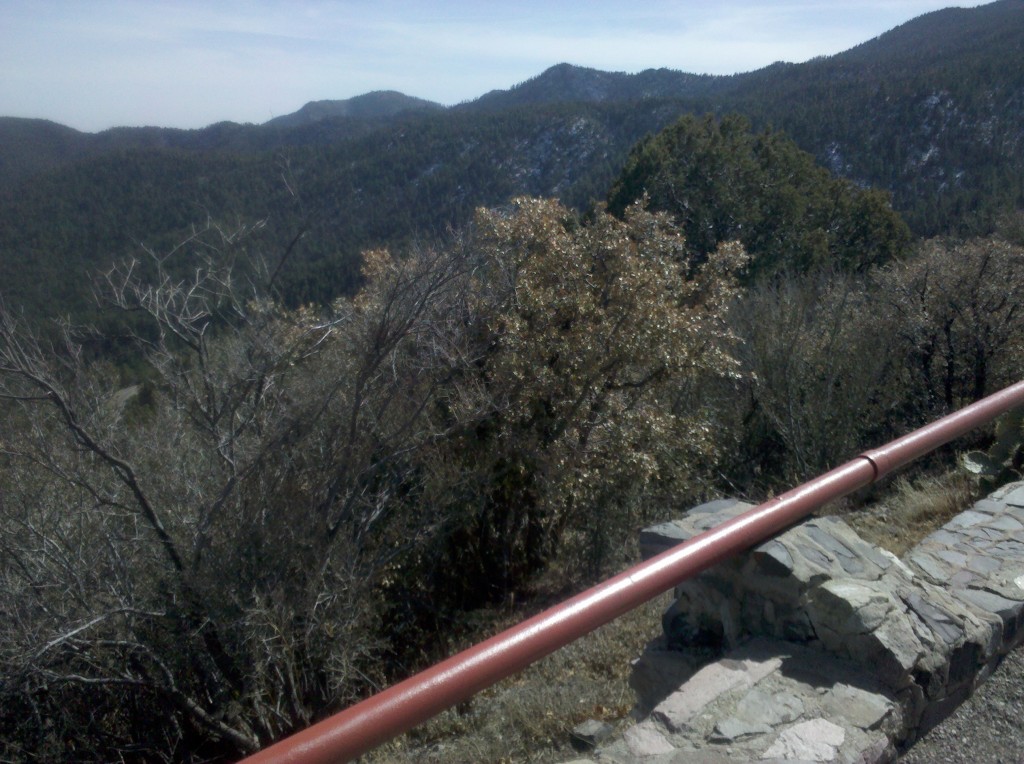 After making it to Emory pass, we had about eight more miles of riding, and all of it was downhill, a drop of 2,000 feet.  It took concentration and strong hands on the brakes to make it safely which, of course, we all did.  We made it to the Black Range Lodge in Kingston, where we stayed for the night.  Kingston was once a town of about 7000 people in the 1880’s and early 1890’s, when silver was still backing U.S. currency.  When that changed in 1893, the town’s economy plummeted, as did the population.  Today there are only about 2 dozen people still living there, and that includes Katherine (the proprietor of the lodge) and Gary and Tom, who help her run it.

Beth and I made dinner for this night, which consisted of breaded boneless chicken, white rice spiced up with hot salsa, and a green salad.  We invited Katherine and Gary to join us, and they both seemed to appreciate both the dinner and the conversation, which somehow included a fair share of history, politics, and bashing of Republicans.  It was all in fun and I know we all enjoyed it.

We all called home on the lodge’s landline.  There was no cell service to speak of and internet coverage was via satellite and spotty at best.  So there was no blogging this night.