Day 6: First There Is a Mountain

Day 6: Silver City to Kingston, NM. Dad and Tim were pretty anxious about climbing Emory Pass on Black Range (aka Sierra Diablo, Devil’s Mountains). It was the coldest day so far, and Day 5 had been extremely windy. They didn’t know what to expect. Neither did I. 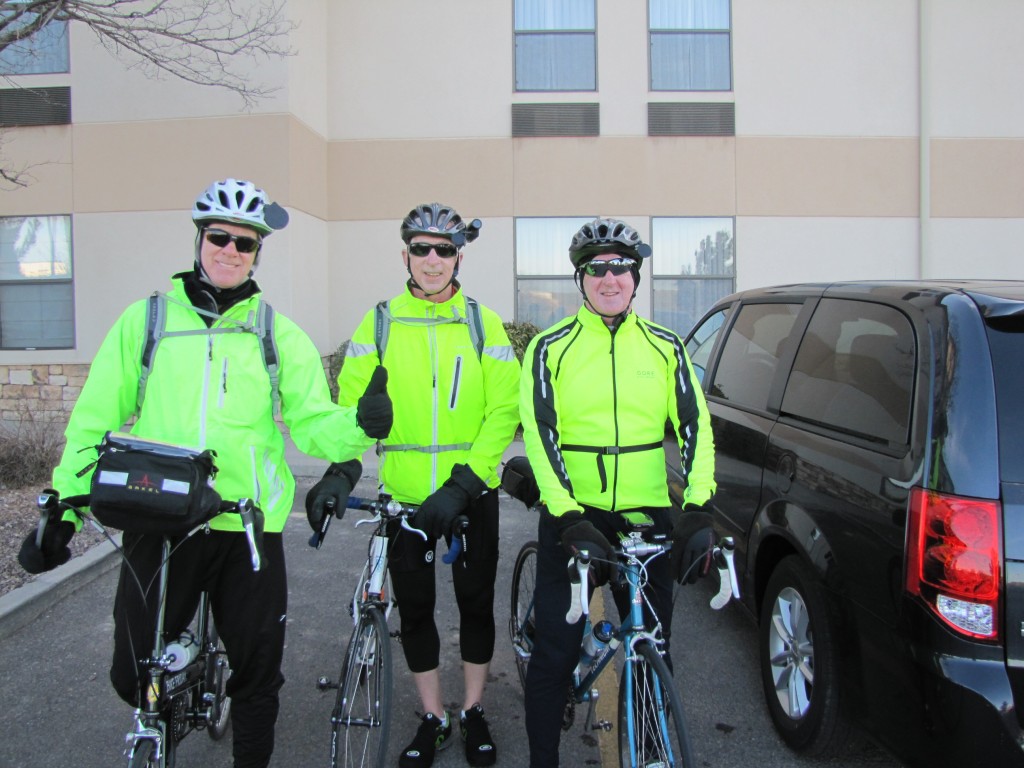 The bikers quickly relaxed once enveloped by the mountain’s beauty. But I, a few hours later, cursed constantly in surprise and fear at how dangerous the road was. This was the twistiest path I have ever driven, and there were no guardrails. Driving off the road into my death was an unrelenting option. I greatly disliked having that option, just as I dislike having the option to jump onto the subway tracks or jump off a hotel balcony when it has a low railing. Plus, at every turn (so about 117 times) I thought, “Maybe they fell off there.” I worried for us all. And I had no cell signal, so I couldn’t track Dad’s location with the GPS app we have on our phones.

But it was gorgeous. In my sporadic calmer moments I felt like I was in Disney’s Davy Crockett, crawling through unspoiled, Technicolor splendor. (Is it sad that I often first think of Disney when I experience real-world beauty? Is it because beautiful wilderness is so foreign to me? I will explore this on my own time.)

At last, only about 15 minutes after I expected to find them, I found them. They were in good spirits and ready for more supplies.

I love the typography in the Gila National Forest sign

I breathed only a little easier for the 12-mile drive from the rest stop to our B&B. At one point (because at 15 mph, it seemed to be taking forever) I yelled, “Get me off of this mountain!” And then amended it to, “But safely, not by me driving over the edge.”

Thanks, me, for not driving over the edge.

The Black Range Lodge was pretty much as I expected: cozy, quirky, and hospitable. Roosters crowed. Dogs wandered into rooms wanting some petting. Catherine, the proprietor, gave me a tour and shared the history of the place. As a former assistant director in Hollywood who has written screenplays, she originally envisioned Black Range Lodge as a writers’ retreat. The lodge, and Kingston (pop. 24) in general, certainly make for a remote escape — maybe a little too remote for me — but it would be a good place to write if you want to cut yourself off from civilization. 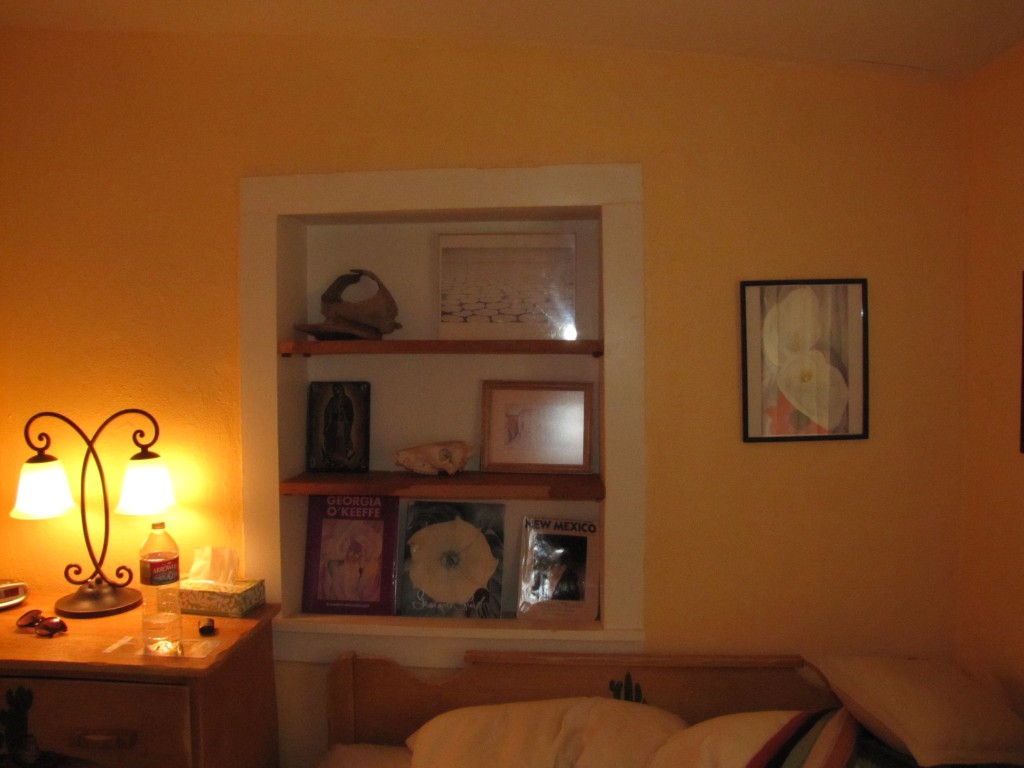 The guys arrived about an hour after me, we had our snacks by a gas fireplace outside our rooms, then Tim and Mark went off to soak in the hot tub and Dad and I made dinner. We invited Catherine and her handyman Gary to join us, and thankfully I’d bought just enough chicken breasts for everyone. Dinner conversation topics included Vietnam, LBJ, and I don’t remember what else because I drank a lot of wine. I needed it after that harrowing drive.

We then retired to the game room and played pool while listening to Chuck Berry on the room’s CD player. I was in no shape for a game of anything, to everyone’s amusement. Tim dominated and humble bragged about not having played in years. Then Mark put on Sting’s Ten Summoner’s Tales while Tim read to us about the next day’s trek. All in all an unforgettable day. 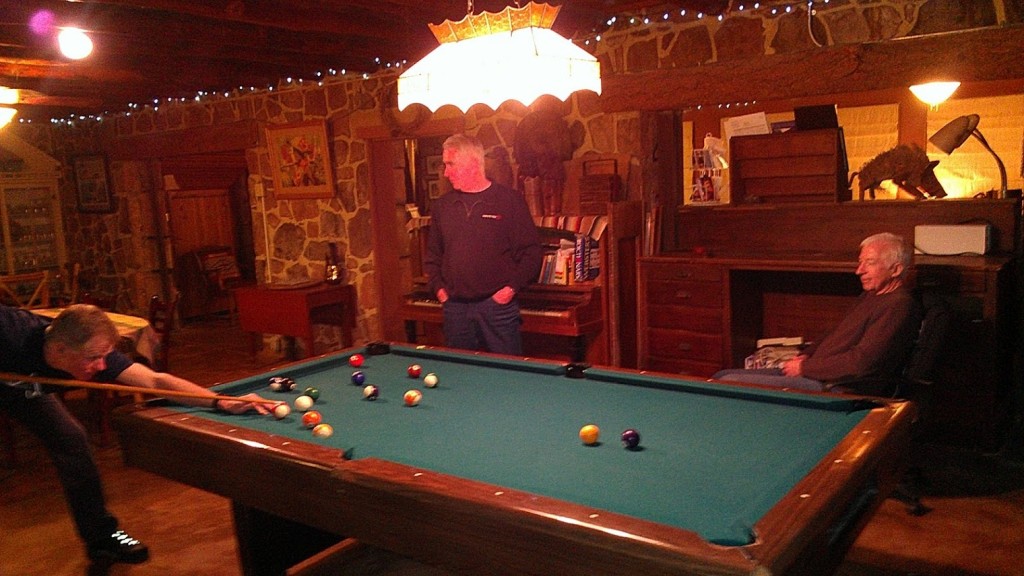 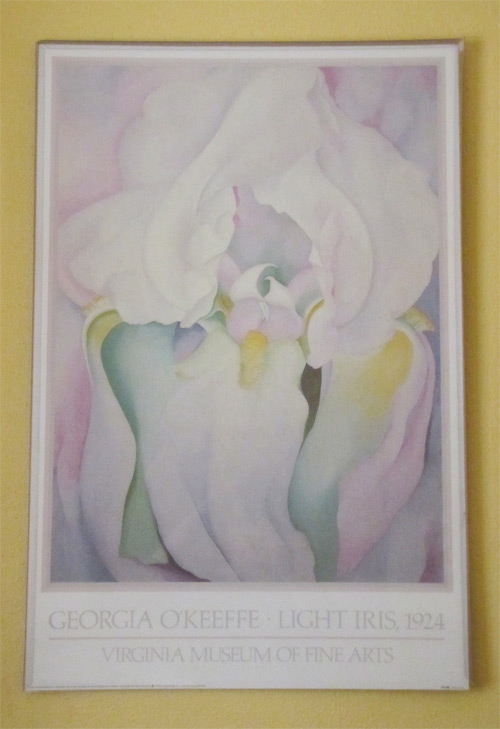 9/10. If you’re a remote B&B in New Mexico you can’t go wrong with a Georgia O’Keeffe print. But let’s say I didn’t know there was such an artist as Georgia O’Keeffe, and this was just on the wall without any marker. It’s immediately obvious that this is in another class. It invites you into its spaces; it wants you to look, and look closely. It reminds you to go outside and look closely at the world. Plus the yellow in the flower ties in nicely with the wall.

8/10. It’s kind of a different ballgame when the artist is critically lauded, but I’m trying not to let it affect my judgement. I should say that in general I’ve never been much of a fan of O’Keeffe’s work. My usual response (one I should maybe reconsider) is, “Oh, another flower that looks like lady parts. Mmhmm.”  But: I really like this piece. It’s intimate but not the most overtly “feminine.” Looking at it makes me feel peaceful. It’s just lovely.