Day 4 – Safford, AZ to Lordsburg, NM – A tailwind is a beautiful thing!

We left Safford, AZ at about 7:45 a.m.  It was only 39 degrees but sure to warm up quickly so, for a change, I did not put on any extra layers and did not regret it.  Here is a video of us at we first started out.  Based on some comments about the videos, I tried to narrate them today, as much as I could.

As usual, we made our first stop about an hour into the ride.  Here’s a shot of Tim at that rest stop, which was about 12 miles into the ride.  Notice the hat under his helmet and the long pants.  We have all gotten quite sunburned on our legs, so Tim kept those pants on the entire ride, even though it eventually warmed up to about 75 degrees today. 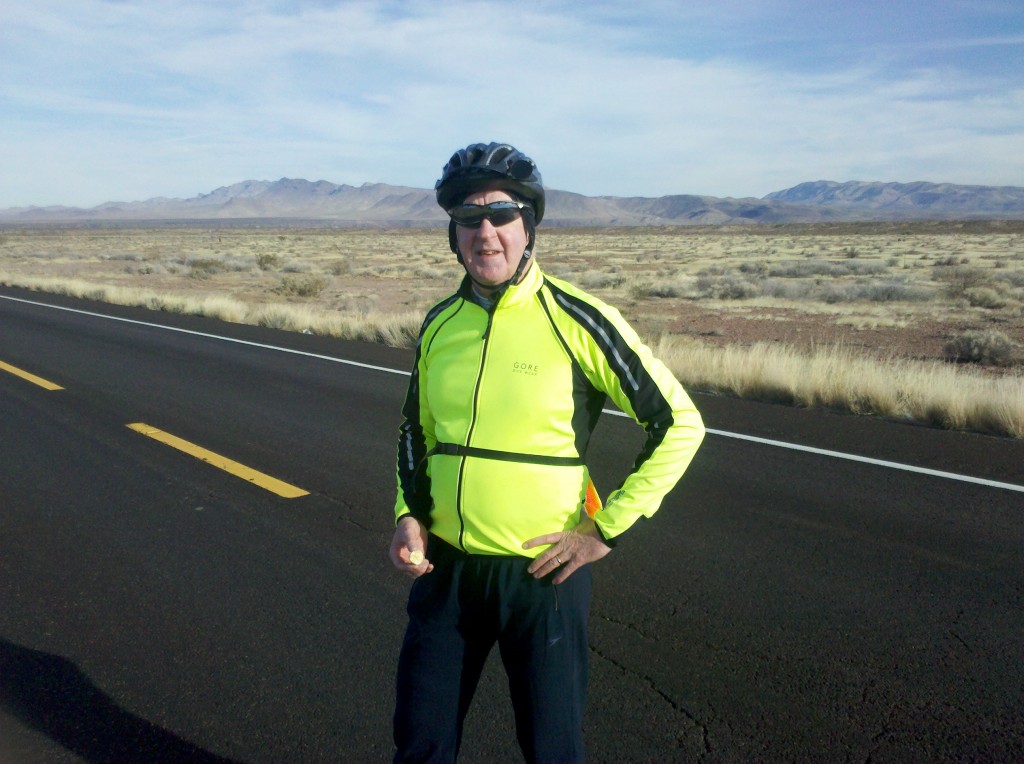 Our next stop was at a historical marker erected by members of the Church of the Latter Day Saints, in memory of two of their congregation who were killed by Indians who had stolen 45 of their horses.  Listen as Tim (yes, Tim, believe it or not!) reads from the words on the historical marker.

Not too far from the marker, the vegetation seemed to change and the hills became grassy and similar in color to the hills of Kansas.  However, unlike the Kansas grasslands, there were trees and bushes and even some prickly pear cactus, as I show in this next picture, taken at our third stop of the day. 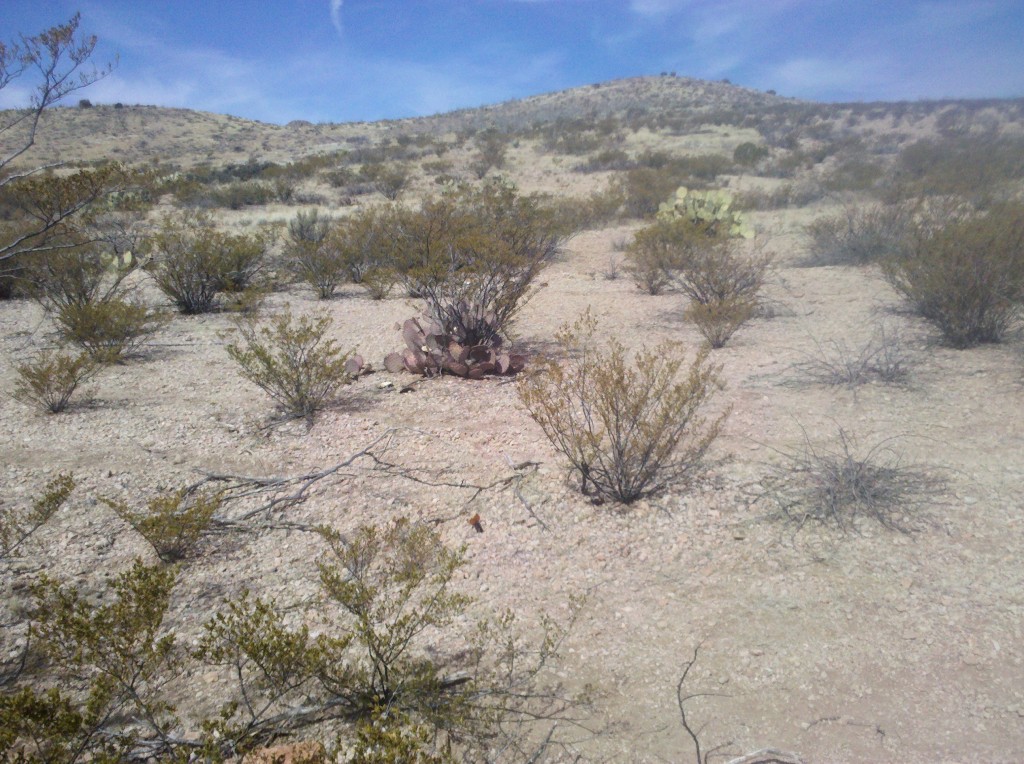 It was after this stop that the grassy nature appeared, as I tried to show and to discuss in this next video clip.

We made it to Duncan and met up with Beth, who had passed us along U.S. 70 about 30-40 minutes before we got there.  We had a nice lunch in Old Jo’s Cafe, which seems to be the only place in town where people can eat out.  We got there just before church let out and the place filled up with locals, most of whom gave us the typical strange looks we get when garbed in our biking outfits, all except Beth, of course.  Here is a shot of Tim and Mark at Old Jo’s Cafe. 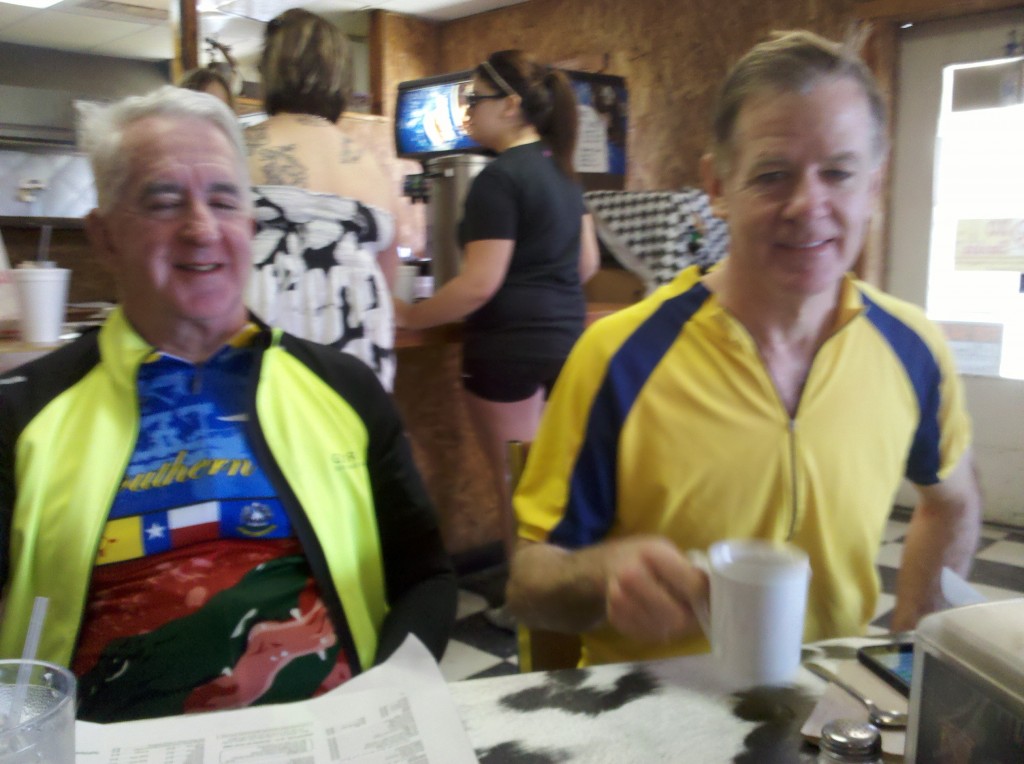 After lunch, we had about 36 or so miles in front of us.  At this point we were blessed with a strong tailwind, that took us into Lordsburg, NM in just about 2 hours, even with one more stop.   You come upon the State of New Mexico, shortly after leaving Duncan, AZ and here is a picture of Tim under the Welcome to NM sign. 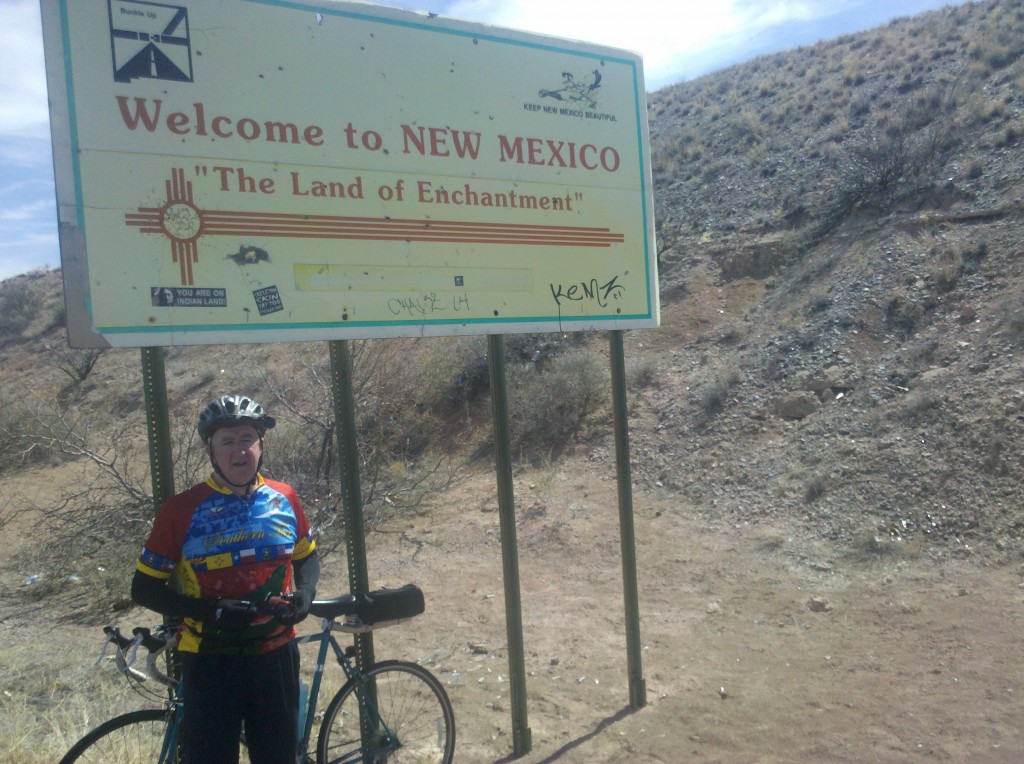 Here is a video clip I took in appreciation for the great tailwind and the newly paved surface of U.S. 70.

We made it to Lordsburg at about 3 o’clock, a distance of about 78 miles including a climb of about 1500 feet. Were it not for the tailwind, this would have been a much more difficult ride.  Tim and Mark went for a swim in the hotel pool (they didn’t get enough exercise? go figure!) while I showered and took a nap.  At 5 o’clock we met up in Beth’s room at our Comfort Inn and Suites (our nicest hotel thus far), to drink some beer, eat some snacks, and listen to Tim read about our next day’s ride in “Conquering the Borderlands.”  At about 6 o’clock, we went to dinner at Kranberries, a family restaurant not too far from our hotel.  Here are a few pictures I took at dinner.  Beth is talking to Marcia (Tim’s wife) in this next picture. 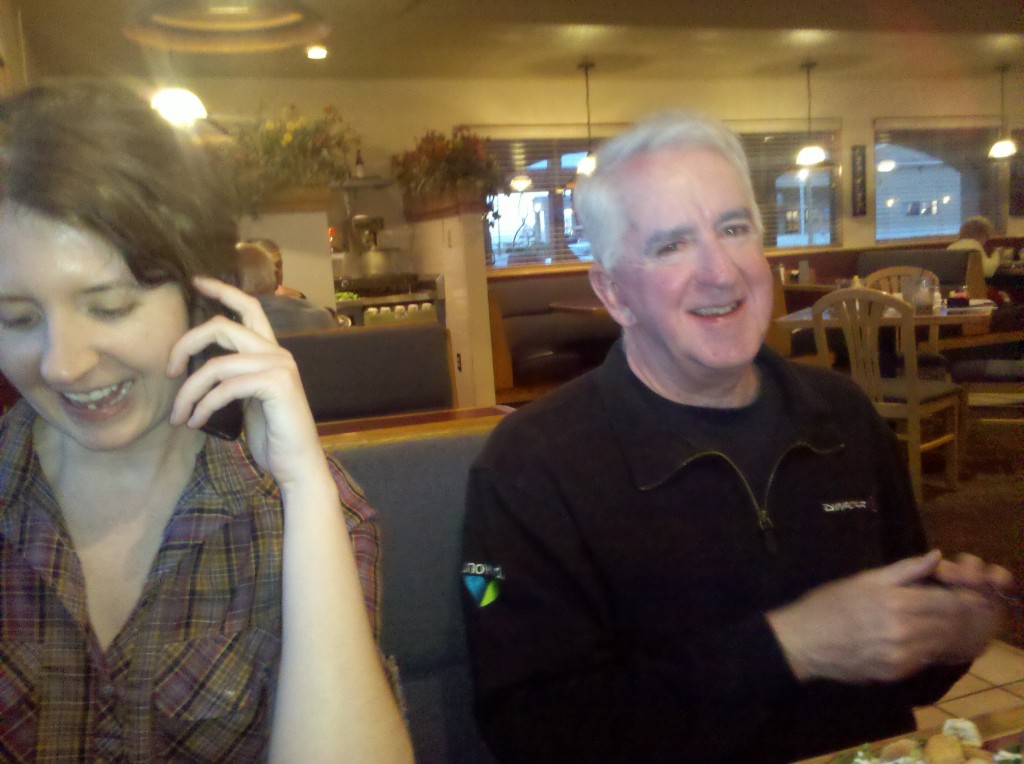 Tim ordered liver and onions for dinner.  Nancy and I remember eating with Tim at a restaurant in Upper Darby by the name of O’Malley’s, and he would always order liver and onions for his meal.  I remember it being very pungent, so whenever the restaurant was out of that dish, Nancy and I were glad.  But just for old times’ sake, here is a picture of Tim’s meal for tonight. 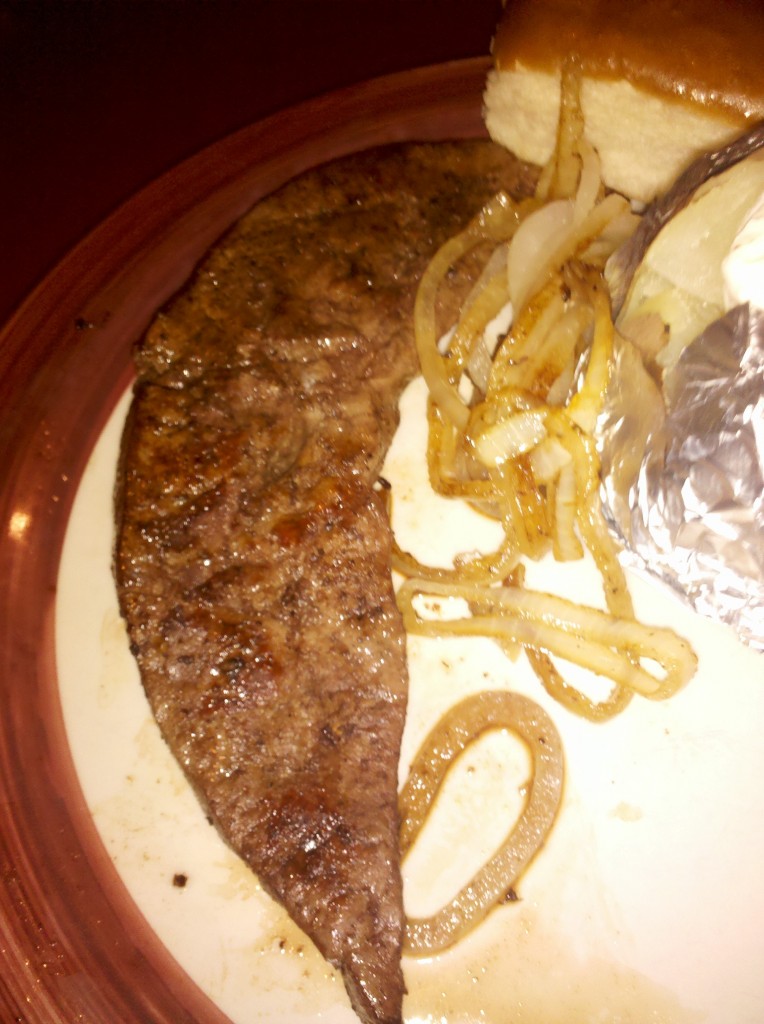 Tomorrow we ride to Silver City, NM.  It’s only about 50 miles but we’ll be climbing about 1700 feet from our current elevation in Lordsburg and about 3000 feet from our lowest elevation during tomorrow’s ride.  Hopefully we’ll have another tailwind!

One comment on “Day 4 – Safford, AZ to Lordsburg, NM – A tailwind is a beautiful thing!”