We left our hotel in Globe at about 7:40 a.m. with the sun directly in our eyes and a ride of about 77 miles in front of us, our longest so far.  We had some climbing today, but overall our elevation dropped by about 600 feet.   Mostly the terrain seemed flat, although there were a few nice downhill rides.  Here is a video of one of them, shortly after we left Globe.

Not too far out of Globe, we left U.S. 60 and took U.S. 70 all the way to Safford, AZ.  Our journey was actually on the San Carlos Apache Indian Reservation most of the day.  We saw one casino but also saw road signs marking U.S. 70 and other Arizona highways, along with signs in the form of inverted arrow heads marking Indian highways on the reservation.  We made our first stop of the day a little more than an hour after leaving Globe.  Here is a picture I took on our first rest stop. 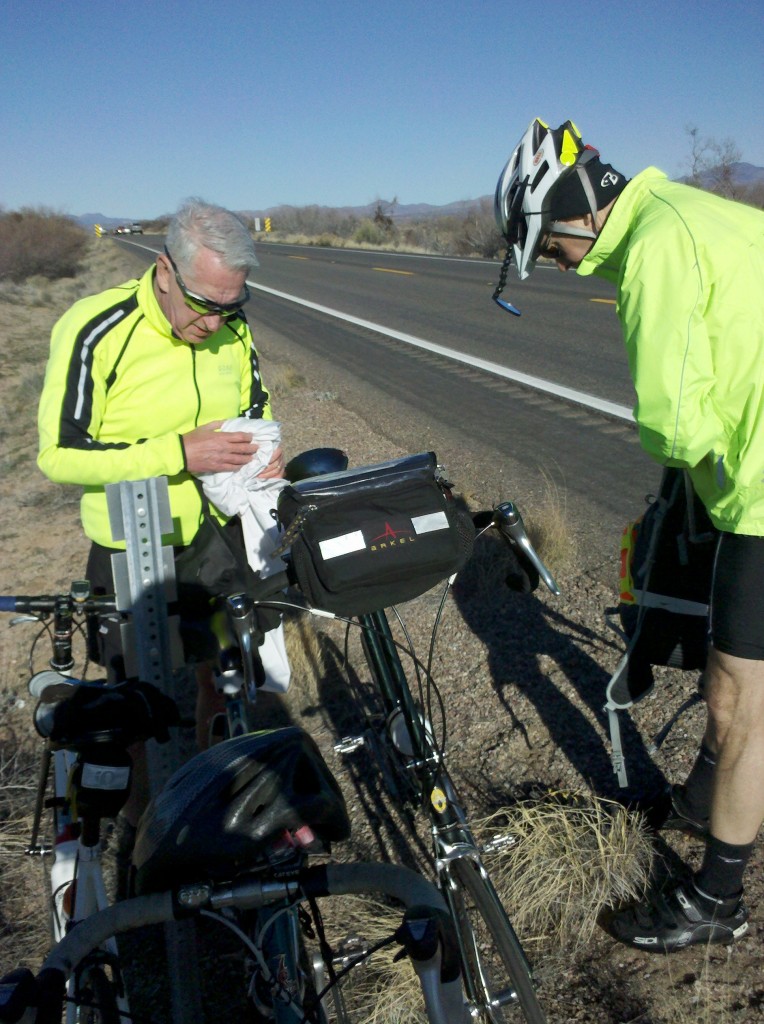 About 75 minutes later we made our second rest stop of the day.  Here are two pictures I took at that stop. 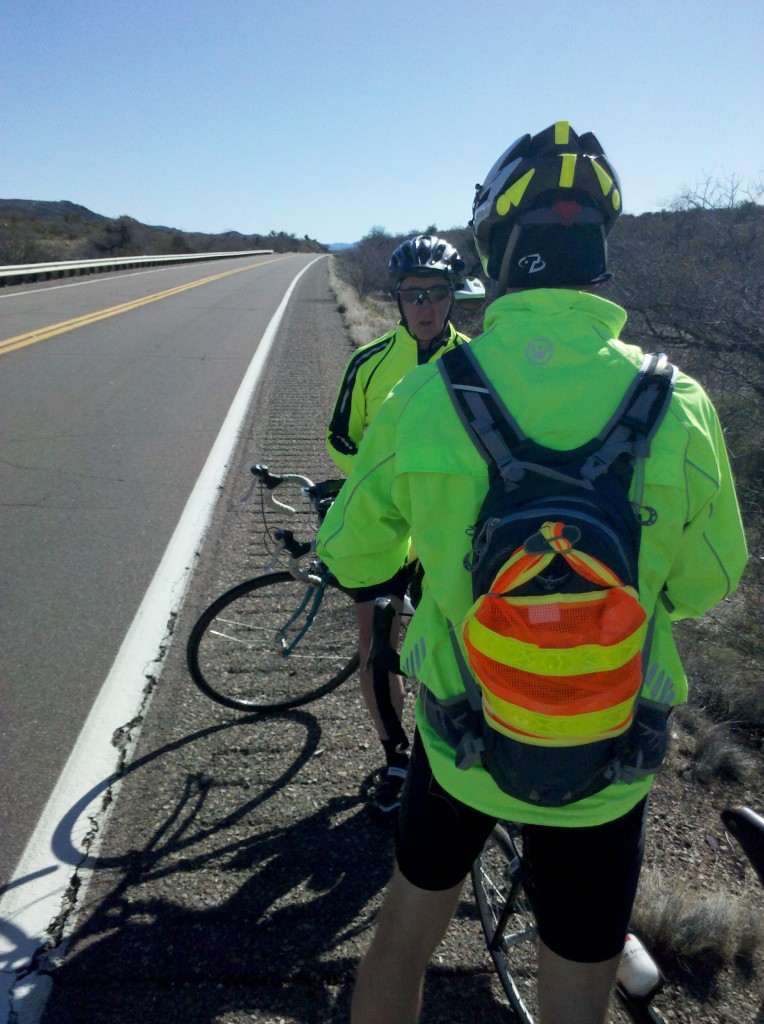 Mark and Tim at rest break along US 70 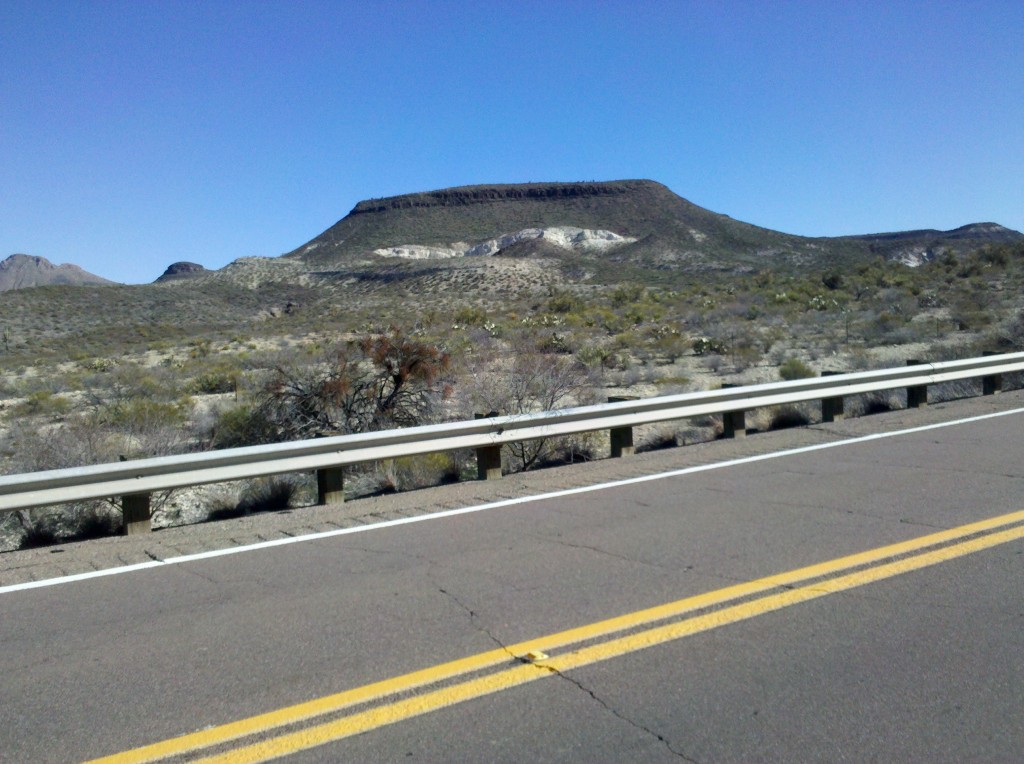 An Arizona Butte along US 70.  Note the prickly pear cacti in the foreground beyond the guardrail.

Beth met up with us at our next rest stop, by pulling over to the side of the road about an hour after our second stop.  By this time, Mount Graham is visible to our south and it stays with us for the rest of the day, sometimes making us feel that we’re not even moving!  Here is a shot of the snow capped Mount Graham, where there is supposed to be an observatory with a very powerful set of mirrors. 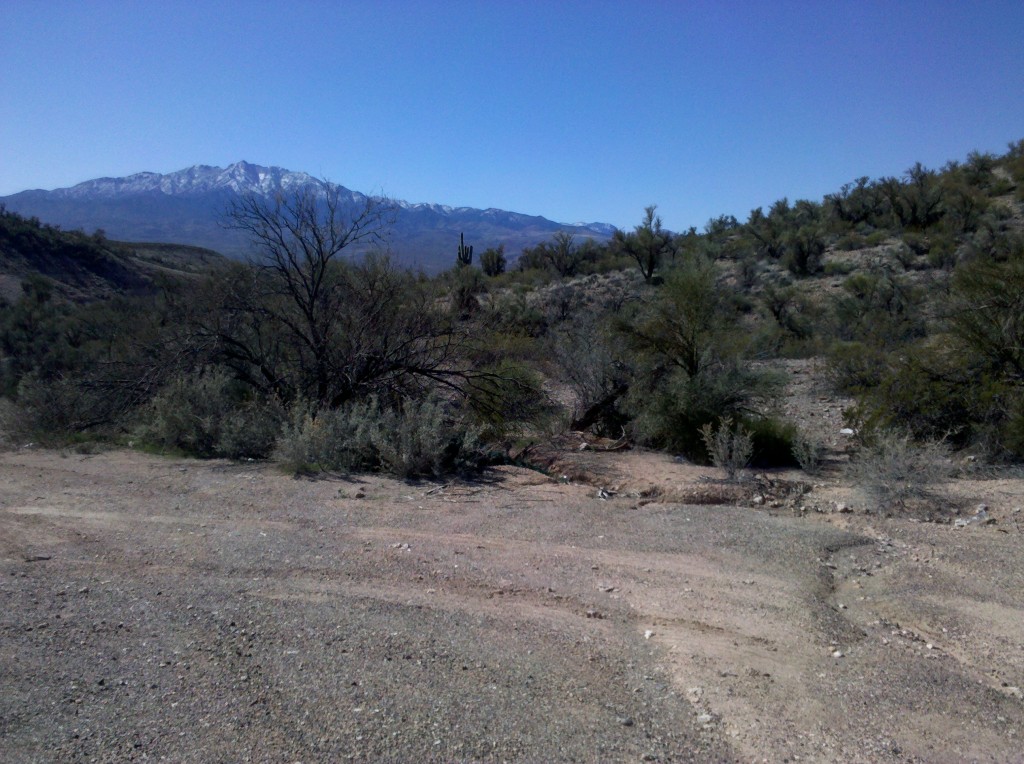 A shot of the snow capped peaks of Mount Graham along U.S. 70.

Not too long after this third rest stop, I took this video.  Ham that he is, Mark decided he wanted to be in the video, so you’ll see him move into the video shortly after I started taking it.

Our next stop was in a town called Bylas, by which point I was dragging and my feet were hurting from some Dr. Sholls’ inserts I had put in my shoes early in the morning before we left.  At the Bylas rest stop, I took them out and began to feel much better.  While walking around to get the feeling back in my feet, I took this picture of a horse. 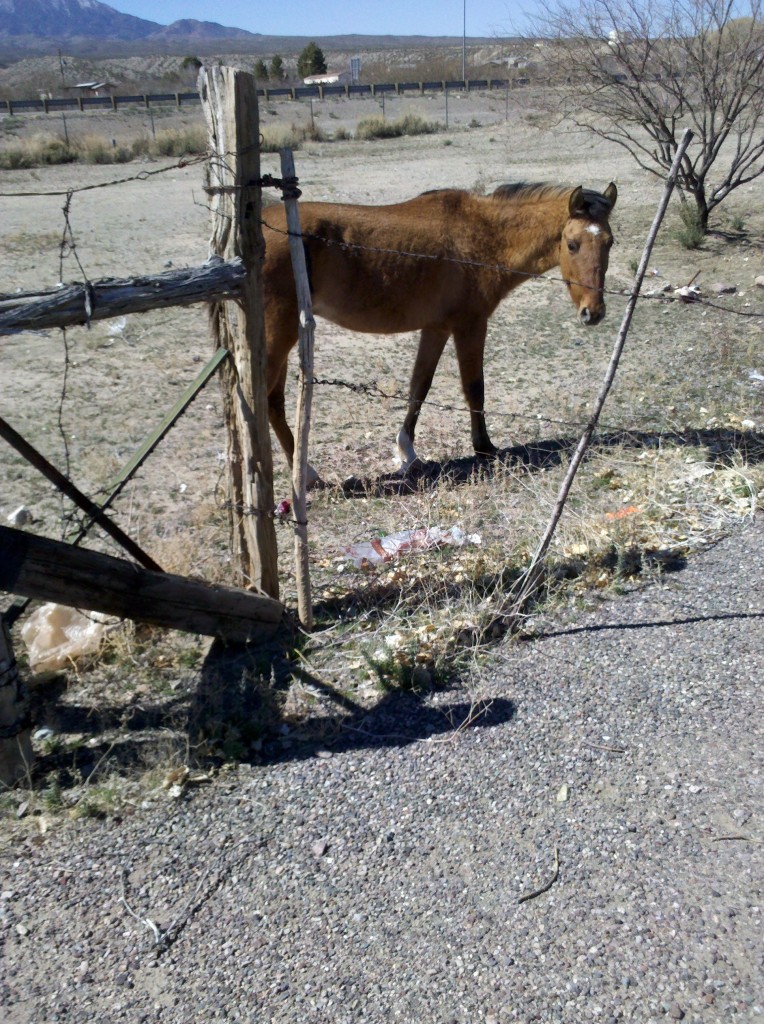 We made a few more stops, but the best stop of the day was at a place called Taylor Freeze in Pima, AZ.  We had been seeing signs for Taylor Freeze for about 5 or 6 miles before we got there, and the signs did the trick of reeling us in to the place.  It reminded me of a Dairy Queen and the ice cream cones Mark and Tim bought and my strawberry milkshake tasted just as good as something from Dairy Queen.  Of course, the fact that we had ridden about 67 miles by that point might have contributed just a little to that sentiment.  Here is a shot of Mark and Tim enjoying their ice cream. 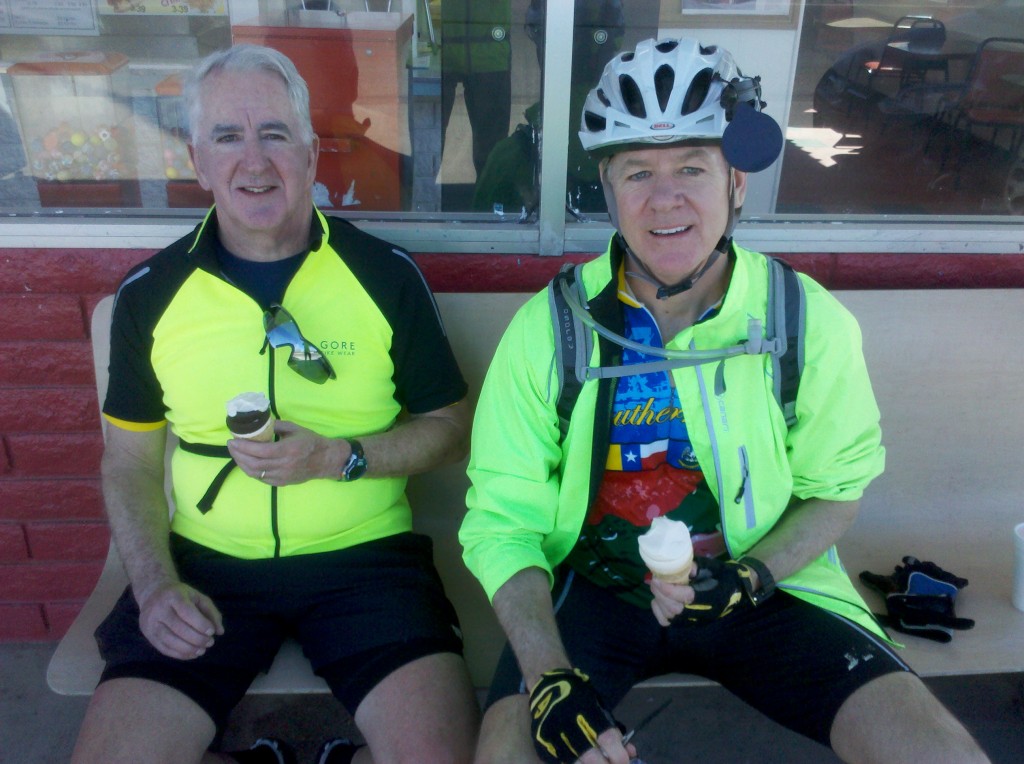 Tim and Mark at Taylor Freeze in Pima, AZ.

While we were enjoying our treats, we chatted with a family from Pima, which had moved there from San Diego to work in greenhouses there.  This fellow works growing beefsteak and grape tomatoes and mini cucumbers.  He’s been there for about seven years and purchased a home for about 10% of what it would have cost him (if he had been able to afford it) in San Diego.  There were all very nice and super friendly.

We had a little more riding to do but made it into Safford and our hotel by 3:30 p.m.  Tim and I went to a 6 p.m. mass at St. Rose of Lima Church in Safford, which was interesting for the congregation in attendance.  Unlike the nearly homogeneous east coast congregations, this one was about 1/3rd Anglo, 1/3rd Hispanic, and 1/3rd American Indian.  There was also at least one Asian family in attendance.  The liturgy was familiar and Tim and I knew all the songs, which were played by a guitar player in the back of the church in a choir loft.  There were also lots of young people in attendance, who didn’t all seem to be there with their parents, which is another difference from the east coast.

We all went to dinner afterwards at the Copper Steer just outside of town.  We all had steak (although Beth was good – her’s was with a green salad) and it was excellent!  Then it was back to Beth’s room for Tim to read to us from “Conquering the Borderlands” about what to expect on tomorrow’s ride.