Like Led Zeppelin in 1991, SAG LADY IS BACK. I know how much you have missed me.

Last year’s journey was unexpectedly wonderful, so I have high hopes for Leg Two (L2). My dad thinks I need to keep my expectations in check, but my feeling is, more than anything that actually happens here, it’s my attitude that affects the experience. So I’ll just expect all the wonder I want.

Besides, if my flight to Phoenix was presageful (thanks, Merriam-Webster; it’s hard to find a word that means “portentous” but with a positive connotation), L2 is bound to be interesting. Shortly after I got on the plane, two guys my age introduced themselves, apologized, and took their seats next to me. I soon learned that they were apologizing for being total goofballs. They were on their way to Arizona to “watch Spring Training baseball and drink beer.” Like me, they’d each enjoyed two tall Goose Island IPAs at Sammy Hagar’s Beach Bar and Grill while our flight was delayed, so we had an immediate, mildly inebriated bond. We started playing a game of War with cards shaped like boogie boards that one of the guys had. They joked around with each other like twelve year olds. Then a 70ish British woman in the row ahead of us turned around and started talking to us. Soon a middle-aged, recently divorced guy in the row behind us joined in. The plane ride officially became a cocktail party, and kept on, likely to the chagrin of everyone around us, for the rest of the five-hour journey. Stories were told, secrets were shared. It was fun, a little exhausting, and unforgettable.

A few hours later, after a surreal dinner with Tim at a hipster pub that was playing heavy metal and a gory sci-fi movie, I went to bed at 1 a.m., or 3 to me.

I woke up after four short hours, still exhausted from the airplane party.

Dad and Mark arrived early, then got to work building their bikes. They hadn’t slept much, either, which probably contributed to this situation: 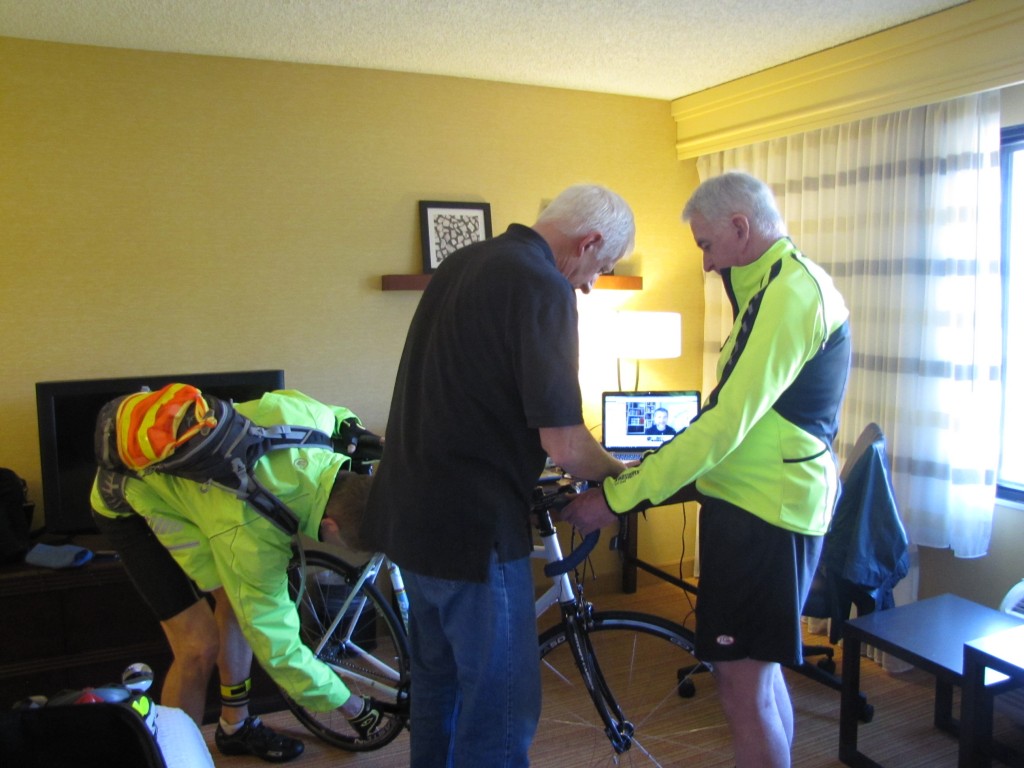 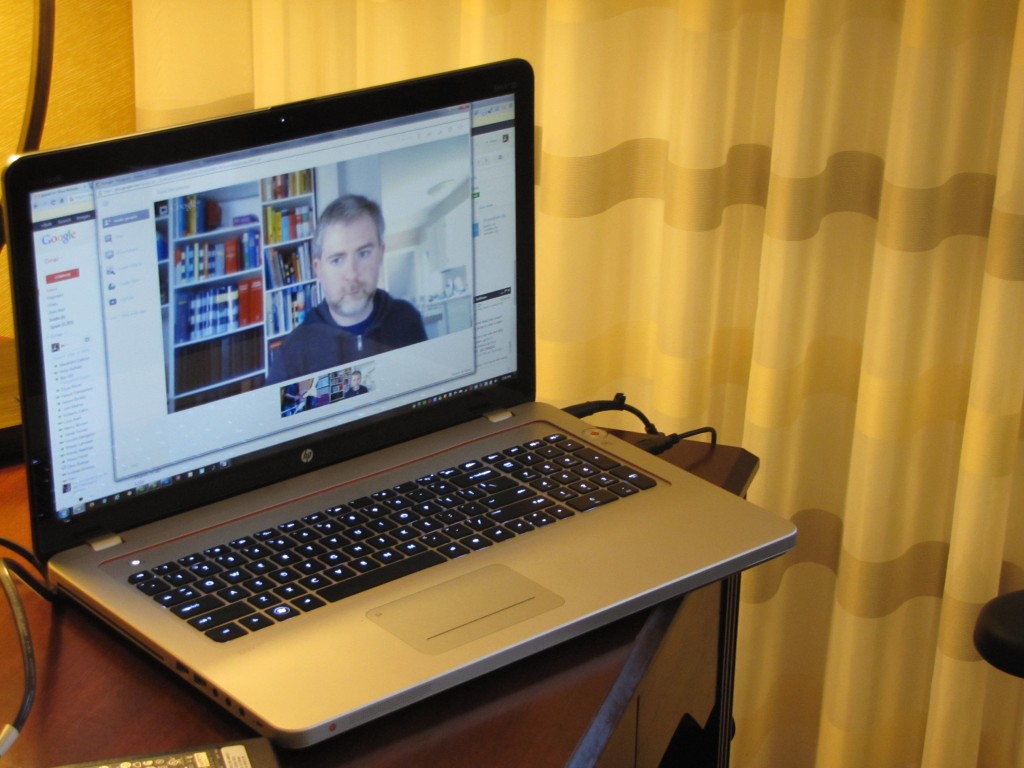 Chris tried to provide remote assistance but it was too hard for him to see what was going on; I’m sure this won’t be an issue by 2015 (L5), when all the technology from Back to the Future 2 becomes reality

Fortuitously, God had built a bike shop across the street from the hotel to solve this problem. Mark and Tim walked the bike over there and we all went to lunch. By the time we were done, so was Dad’s bike. 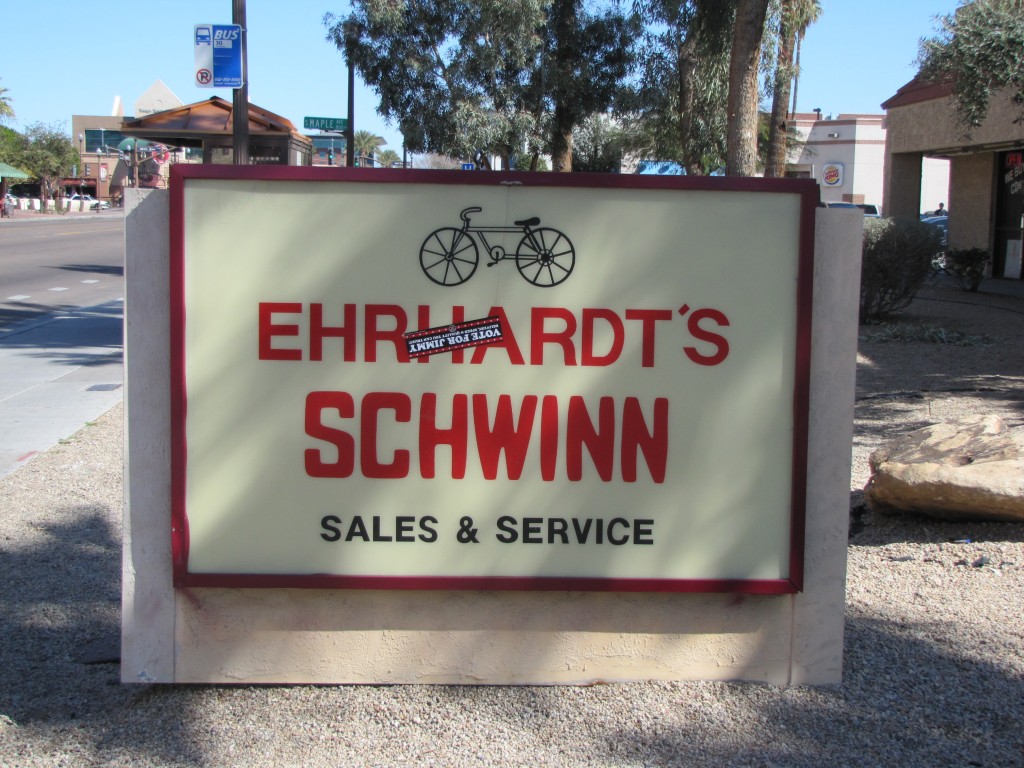 Thanks, God, and thanks, Ehrhardt! 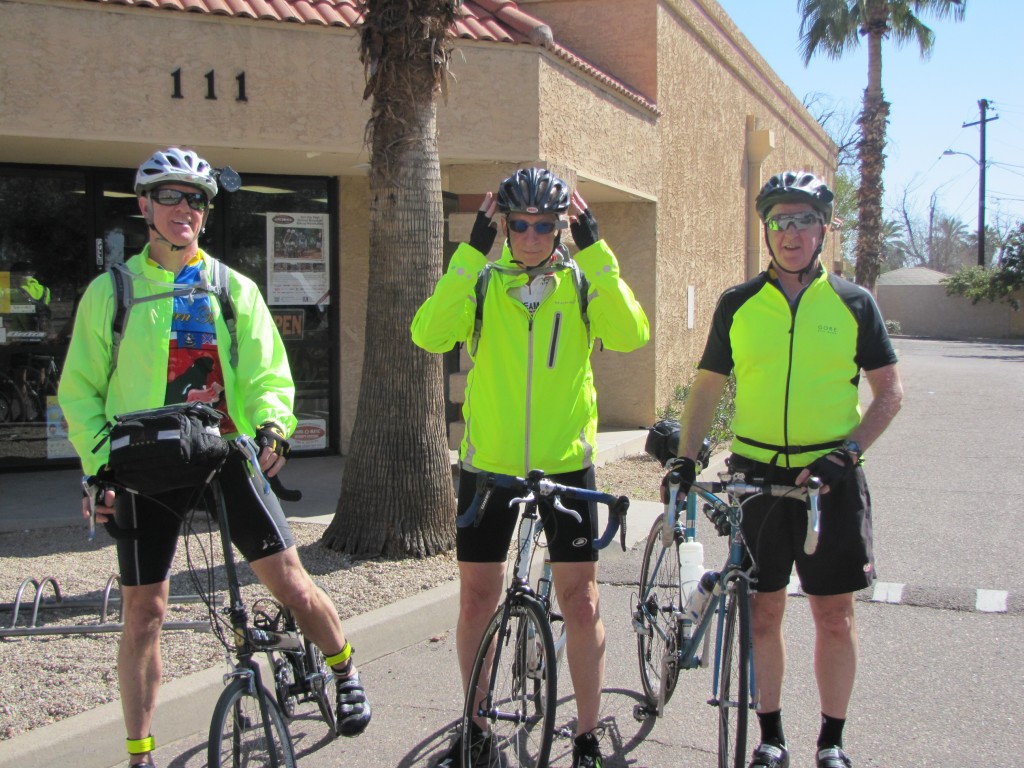 Let’s get this party started, right? 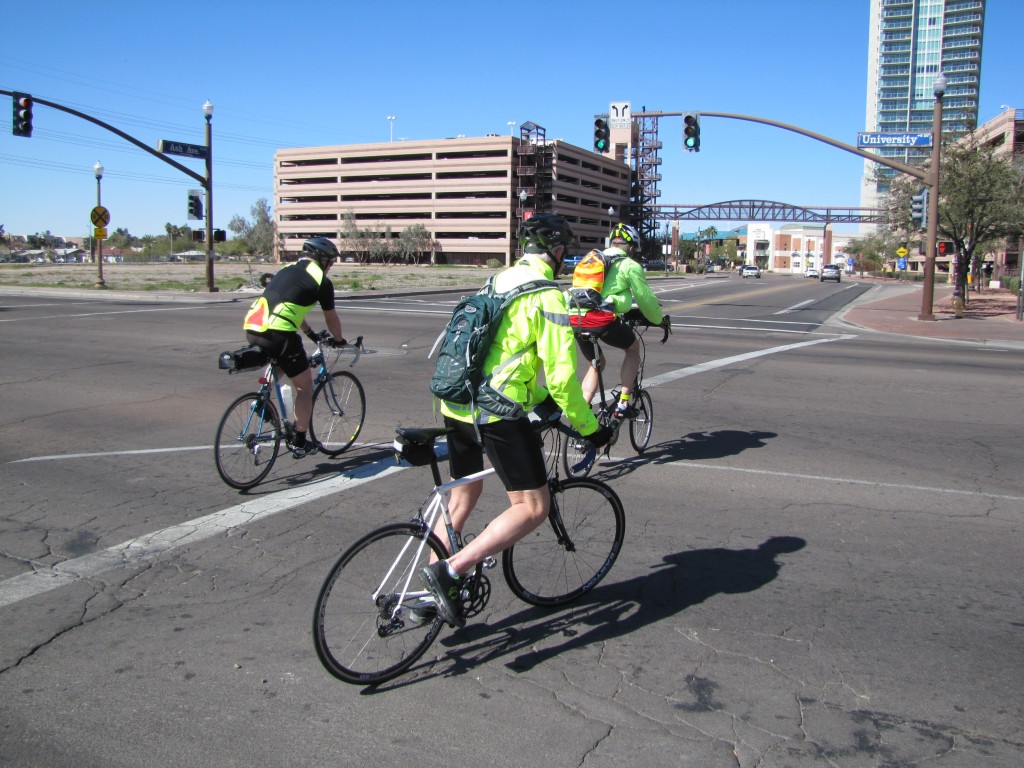 And once again, they’re off!

And I was left to my extremely easy half-hour drive to Apache Junction.

Apache Junction is depressing. You are glad you don’t live there. I asked the woman at the Best Western desk if she could recommend a good restaurant, and she said, “Ugh…. There really aren’t any good restaurants in this town.”

ME: “Okay, could you recommend a restaurant in a town nearby?”

It’s clear that Apache Junction needs all the dollars it can get.

The guys arrived not long after I did. Dad and I went to a weirdly curated supermarket called FOOD CITY and bought some supplies, then we all sat on my balcony, relaxed with some snacks, and listened to Tim read from Conquering the Borderlands, about a group of women cyclists who followed the same route as the brothers. 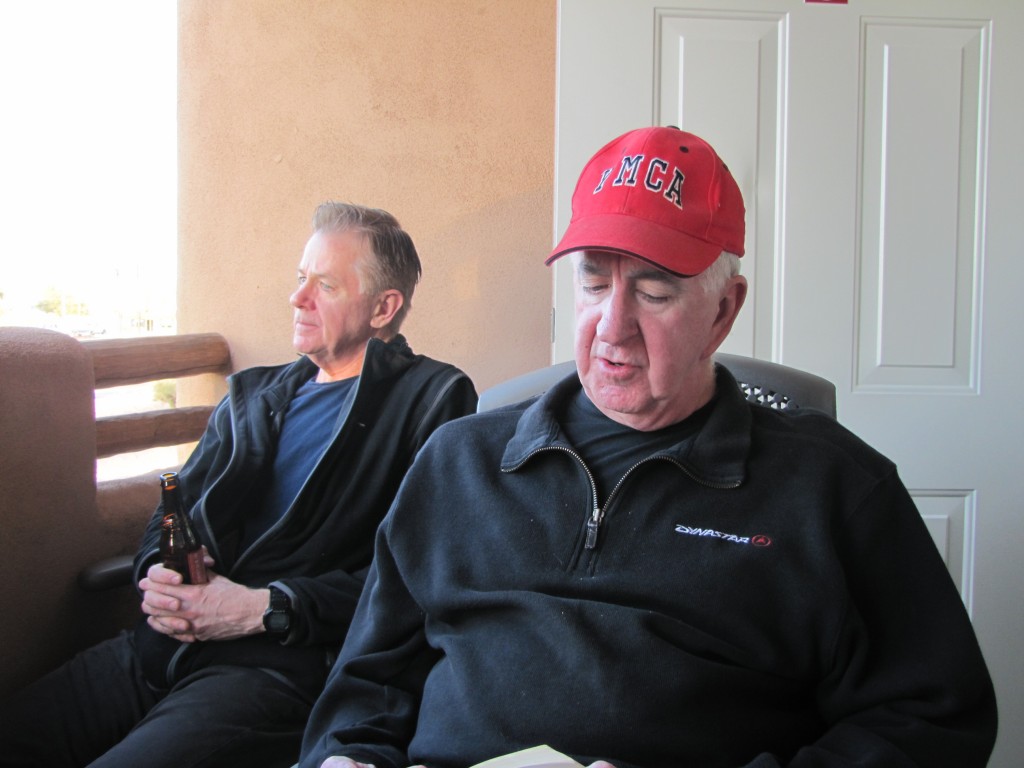 Mark loves it when Tim reads to us

Afterward, we went out to an early dinner at Los Gringos Locos, the not-too-bad Mexican place with great margaritas (but mediocre food, but whatever).

Oh, but what about the minivan? Great White will always hold a special place in my heart, but I am now driving a brand new, midnight blue Dodge Grand Caravan. I am the first and only driver of this guy. The transmission is a little overactive on hills, but overall it’s a sweet ride. 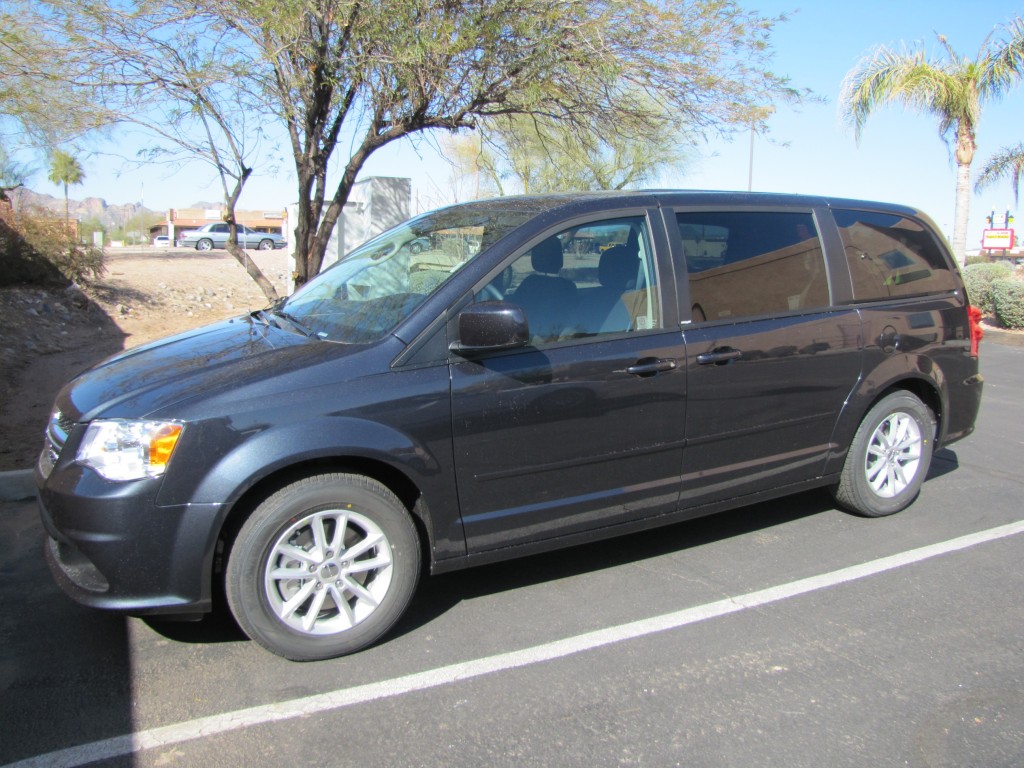 However! I need your help with a name. Here are the contenders:

Boy Blue – One of my favorite ELO songs. It fits because the car is young, get it?

Blue Shark – In keeping with the shark theme (but not the glam metal theme, unfortunately).

Other – Who knows, maybe your ideas are better than mine.

Thanks in advance for your vote!

Note: Voting closes Sunday 3/03 at 1 p.m. You can vote as many times as you want, but please be reasonable.