Day 2: Apache Junction to Globe, AZ – challenging but not our hardest ride

We got on the road by 7:40 a.m., after a quick breakfast in our Best Western Hotel.  Forgetting it was a Friday in Lent, I inadvertently ate some sausage links for breakfast and then quickly forgot about it.  When we sat down for lunch in Superior, AZ,  I remembered it was Friday.  Paraphrasing here, Mark teased me that, since I had already sinned by eating meat once today, my milk bottle soul couldn’t get any blacker by having a burger for lunch, but I successfully resisted the temptations of the Mark devil and had a grilled cheese sandwich for lunch.  Here are a few pictures of the rest stop we took about 90 minutes into the ride. 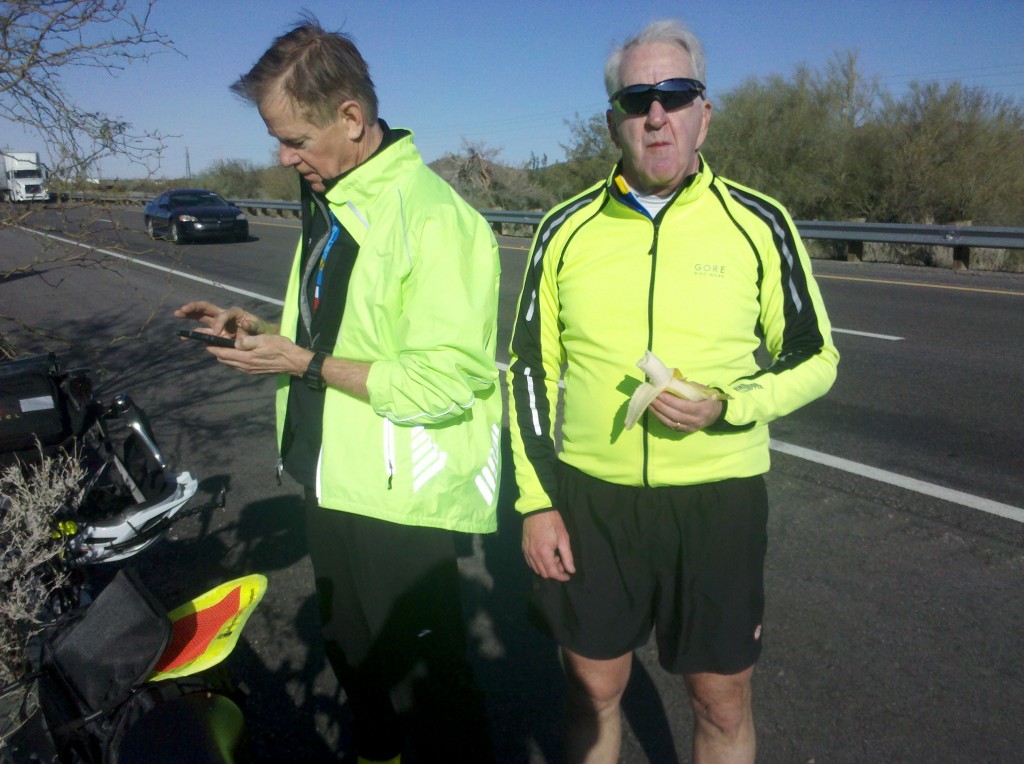 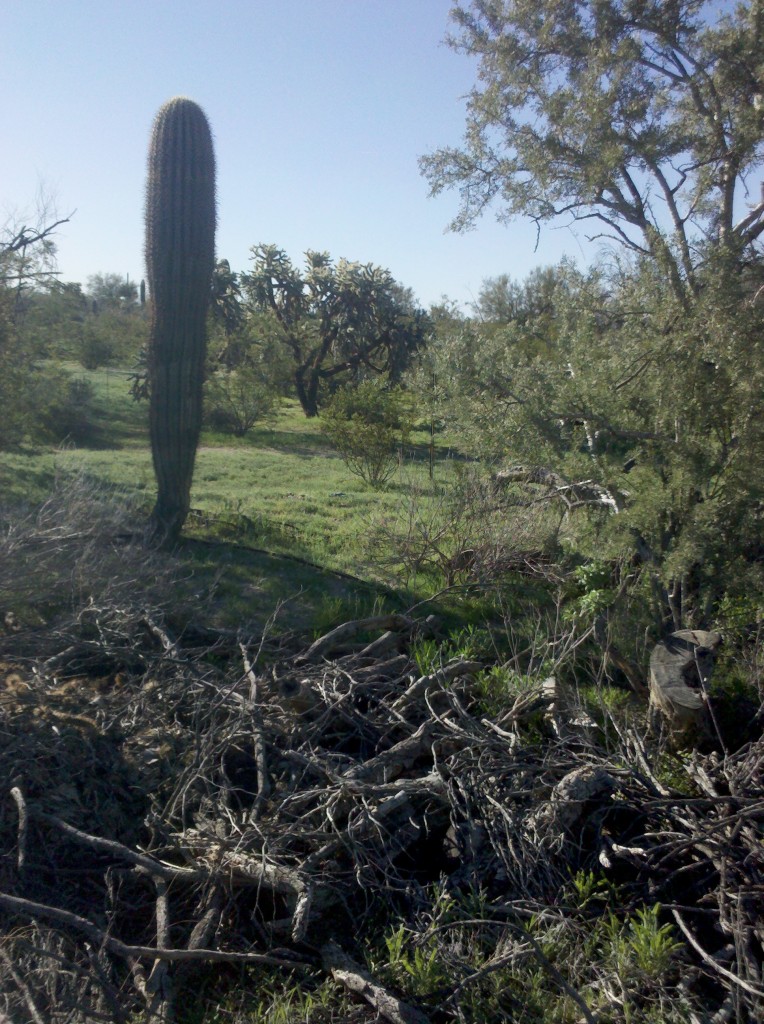 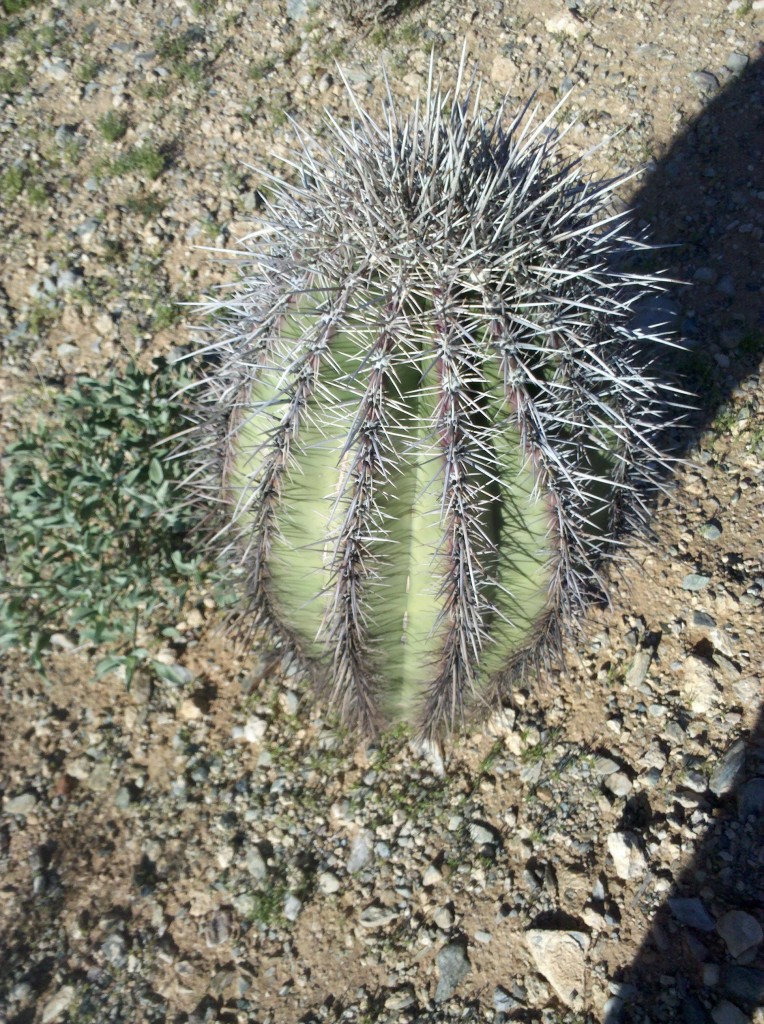 After my good Catholic lunch in Superior, Beth and I got my helmet cam (Thanks Chris Pagoda!) mounted and operational.  Here is the view riding out of Superior, AZ right after lunch.

Not too far from Superior, we came to the famed and feared Queen Creek Tunnel.  It is 2 lanes going eastbound (our direction) but has about a 6% grade.  So Beth drove Midnight Blue (please vote several times for that name! 🙂 ) behind us with her flashers on, which made it a tad less scary.  Here is some video I took while riding through the tunnel.  Tim is the one shouting Alleluia! as we near the exit.  Enjoy!

And here are some pictures I took once out of the tunnel.  The mountains were pretty awesome! 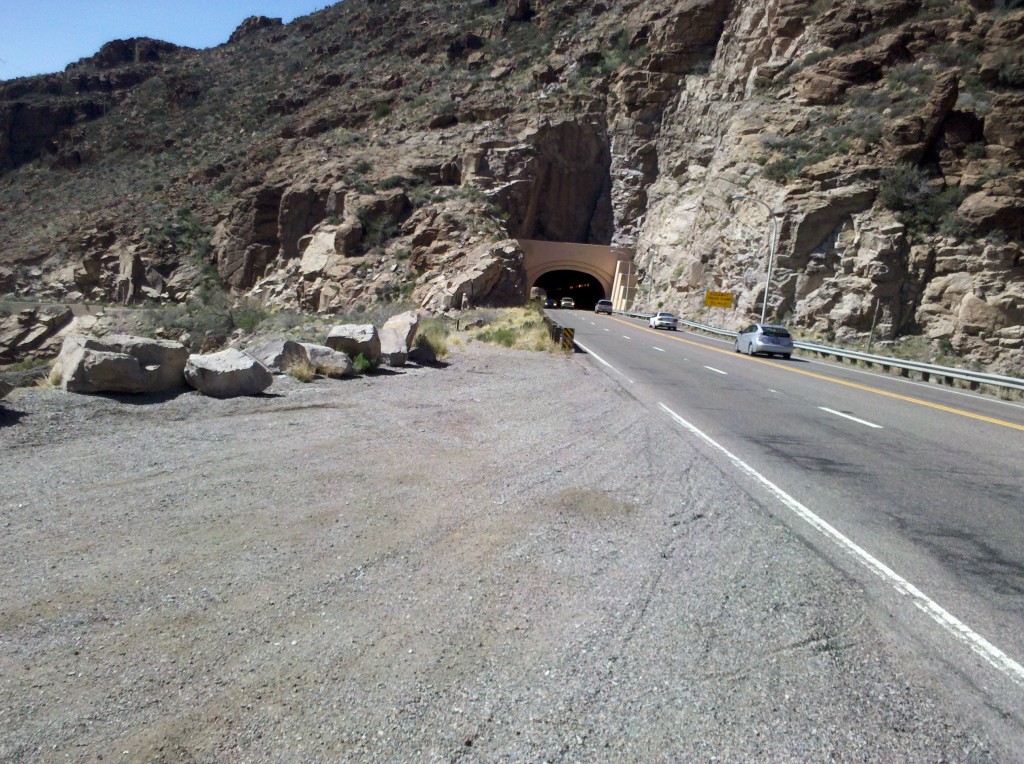 Exit of Queen Creek Tunnel after successfully riding through, with Beth’s help.  Thanks Beth! 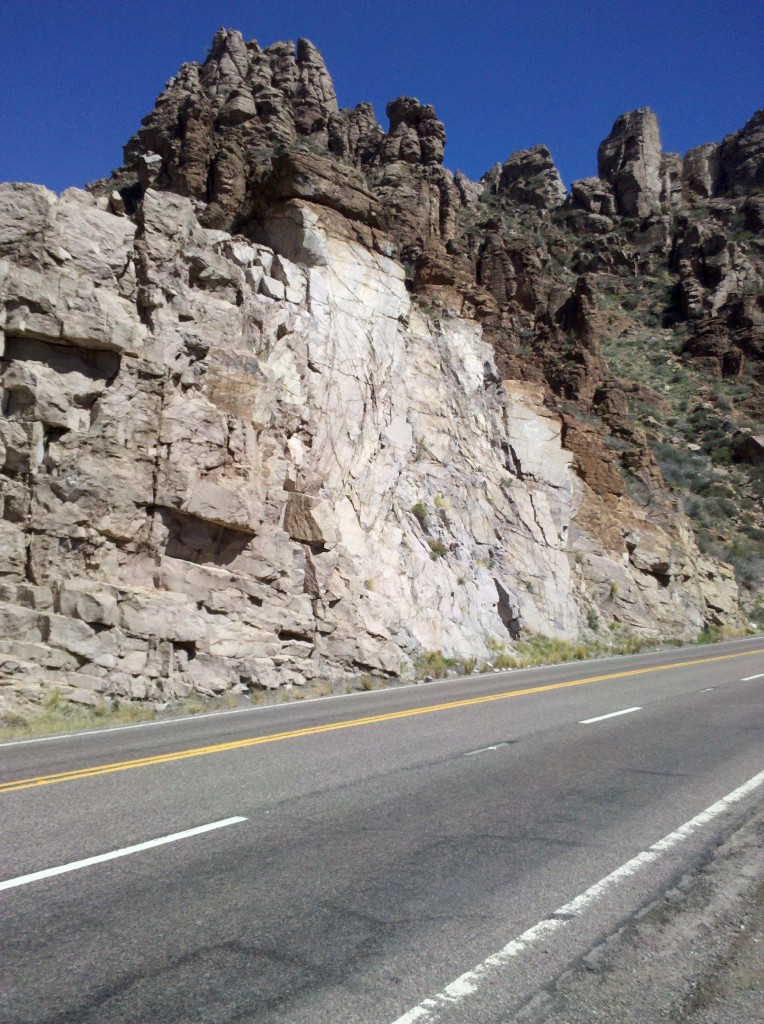 Mountains on east side of Queen Creek Tunnel.

Not too far from this tunnel, the desert vegetation started to change, and we didn’t see Saguara anymore.  So here is one more shot of the side of a mountain along U.S. 60 showing all of the Saguara growing on it. 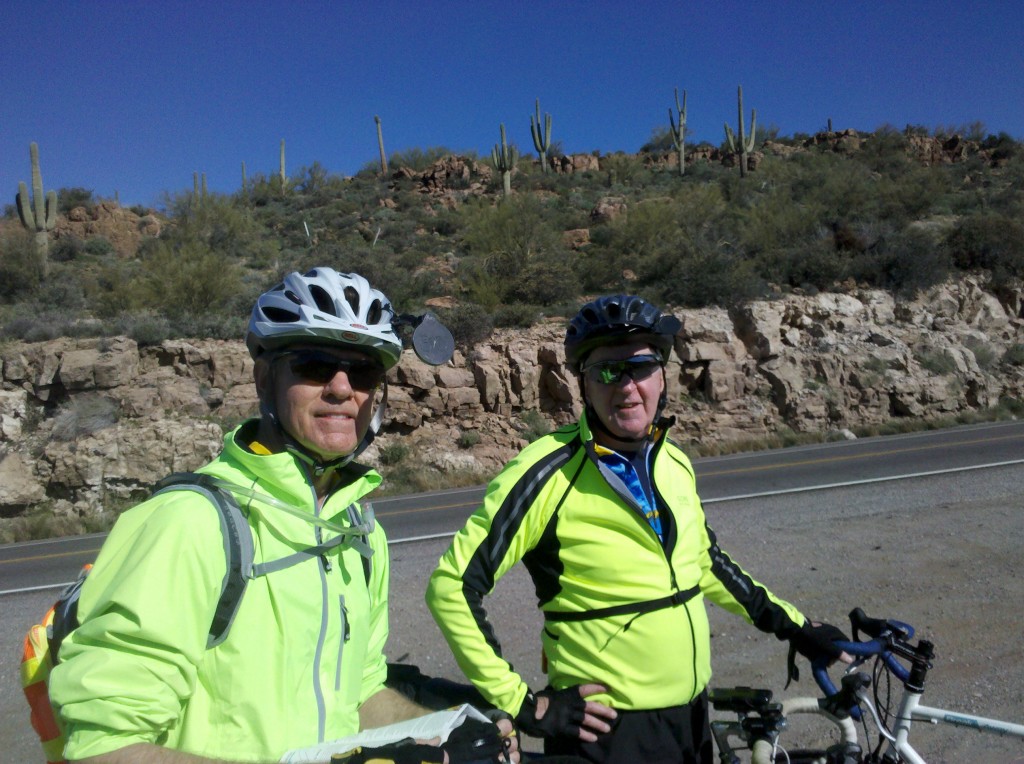 We climbed for about another 10 or 15 miles after the tunnel, after which we were able to coast now and then.  Here is one more video showing some downhill riding today.

We made it to Globe a little before 3 p.m., had a few beers, and listened to Tim read from “Conquering the Borderlands,” so we can find out what we should expect from the ride tomorrow.  We finished up the day eating at a really nice Mexican Restaurant named Chalo’s Casa De Reynoso.  Here is a picture of the graphic on the menu. 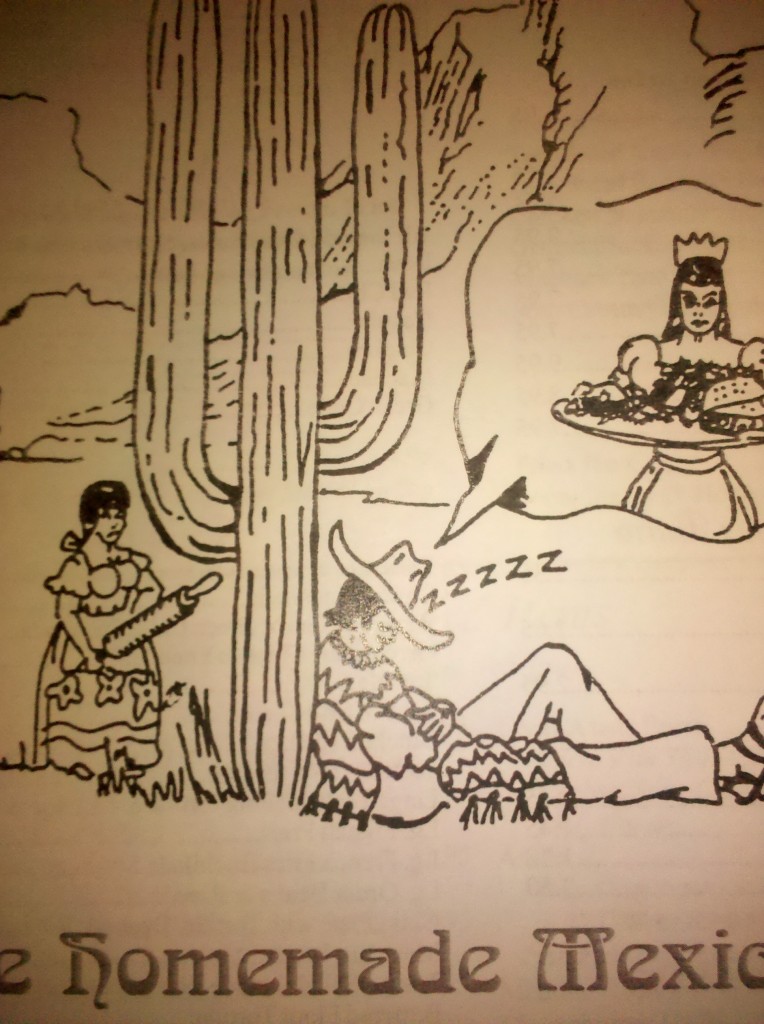 Menu graphic for Calo’s Casa de Reynoso in Globe, AZ – great food and lots of it.

The restaurant cashier is the wife of the owner, who bought it from his parents.  The restaurant started in 1969 and has been continuously operating ever since.  The sleeping hombre is the father of the current owner, who is dreaming about having a beautiful senorita bring him a delicious meal.  But his wife, the current owner’s mother, is about to hit him over the head with a rolling pin! Oh and by the way, there just happens to be another Saguara – he’s sleeping next to it!

Oh and by the way, I was a good Catholic boy and had Cheese Enchiladas for dinner on this Friday night in Lent. 🙂

2 comments on “Day 2: Apache Junction to Globe, AZ – challenging but not our hardest ride”