March 8 – Our last day’s ride from Wickenburg to Tempe, AZ

After a less than perfect night’s sleep, Tim, Mark, Beth and I all met up for breakfast at 7:30am at a Cafe across the street (US 60) from our motel, the Wickenburg Best Western.  Our breakfasts were good and the coffee was really good, both of which helped make up for the less than impressive motel.  By 9:00am we were on the road on our way to Phoenix and Tempe.  Tim swears he heard a rooster crowing this morning (something we have heard each and every day on our ride), but neither Mark nor I actually heard it.  I hope Tim is right and than there was a rooster, if nothing else for the consistency of this daily occurrence.  The scenery today was much more interesting than yesterday.  US 60 East was 4 lanes from Wickenburg to Sun City and then mostly 6 lanes after that into Phoenix.  But we left US 60 in Peoria, AZ and got onto dedicated bike paths which were adjacent to a canal system, some of which had water and some of which did not.  The canal bike paths, which included the New River, the Skunk Creek, the Arizona Canal and the Cross-Cut canal, were vehicle free and extremely safe, but almost never marked.  As a result, we were constantly checking Google Maps’ biking directions to our hotel, just to make sure we hadn’t made a wrong turn.  It took us about 7 hours to bike 70 miles and for the most part the ride was not difficult.  The most time consuming part of today’s journey was all of the stops we made, either examining maps or updating the Google Maps, to find out way.  Here are some of the photos of today’s seventh and final ride of our first cross country leg from San ?Diego to Phoenix: 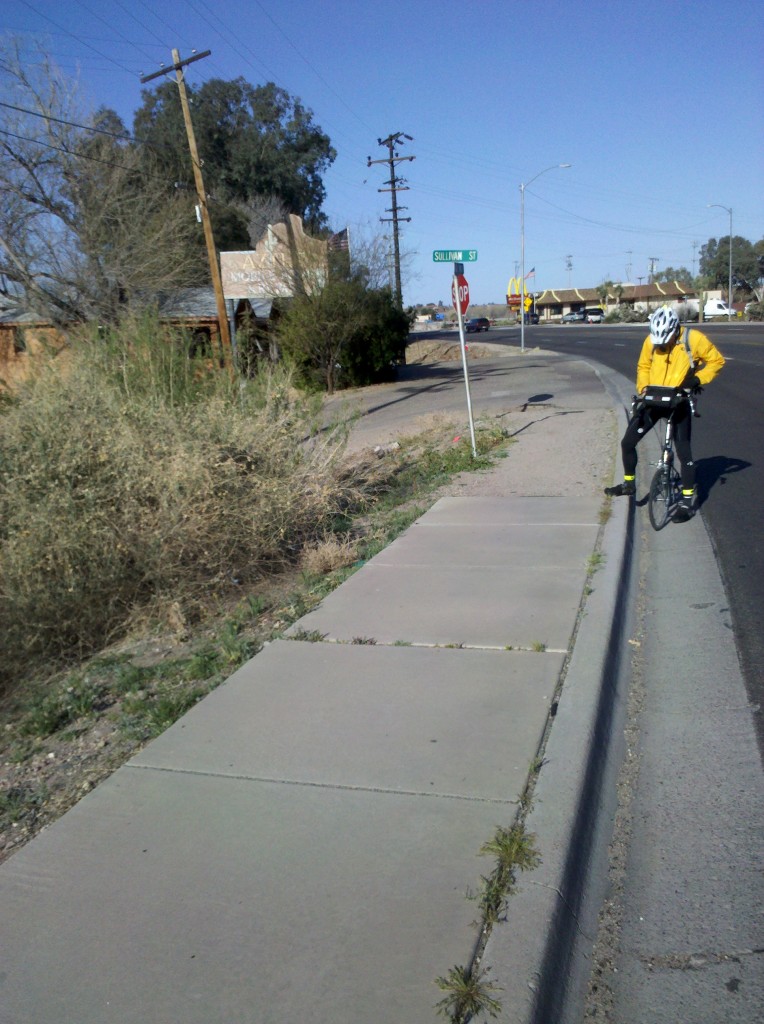 Sullivan Street sign and Mark on outskirts of Wickenburg, AZ 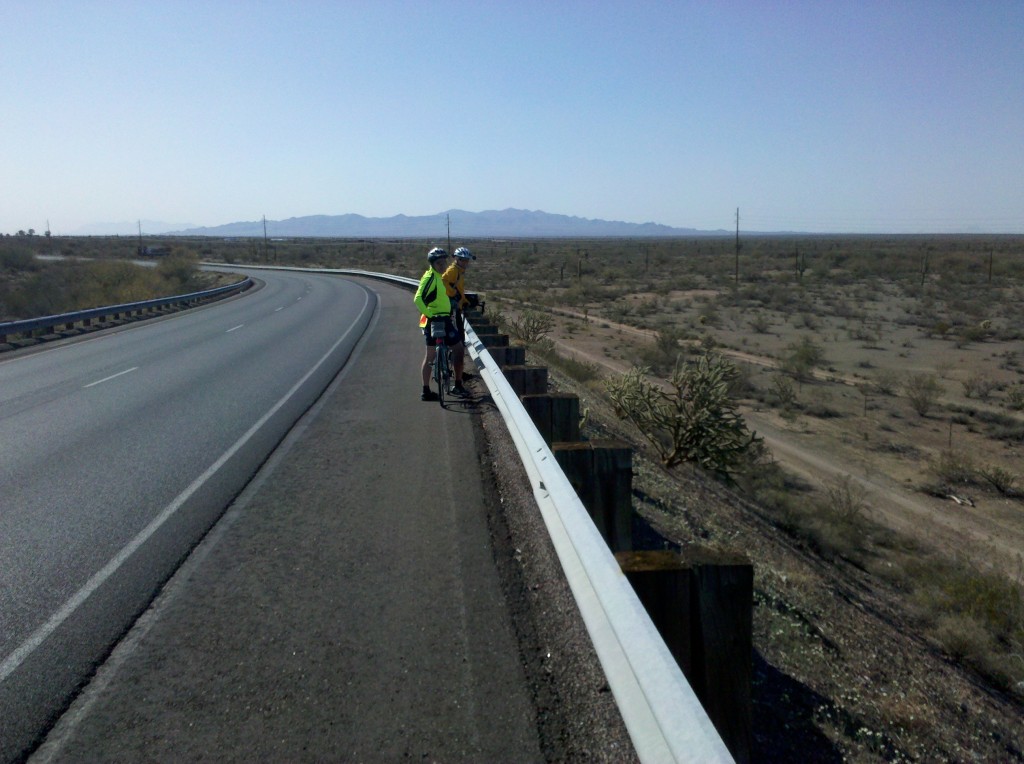 Tim, Mark and Teddy Bear cholla cactus on Morristown Overlook along US 60 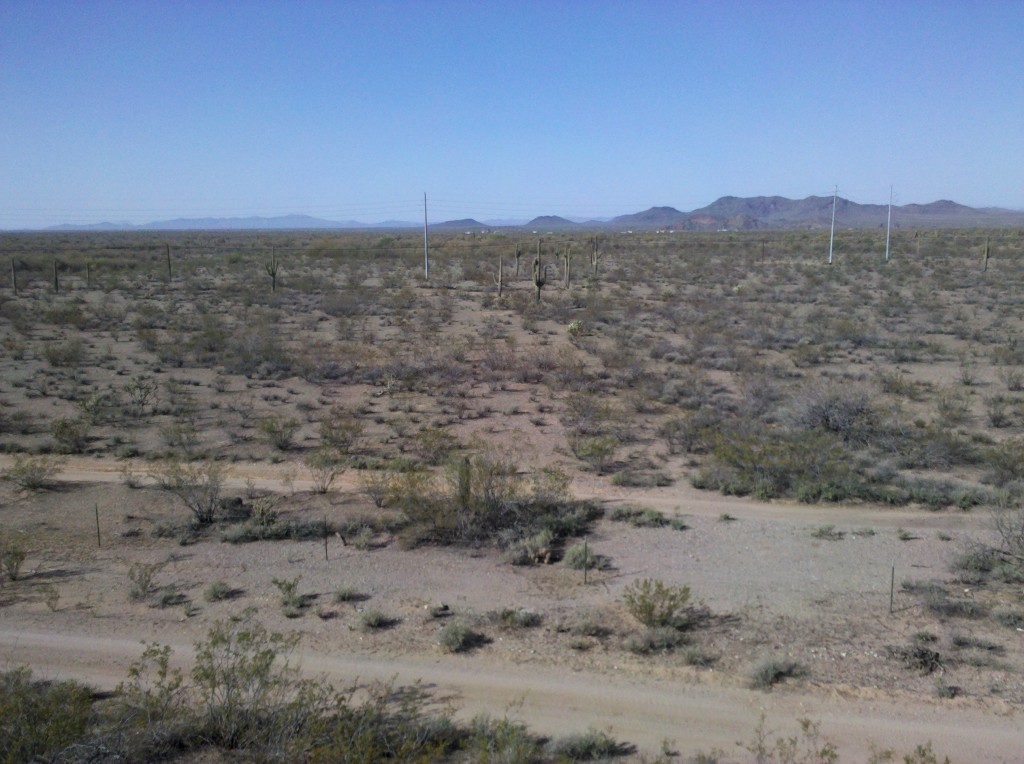 Barrel cactus and sagaura cactus from Morristown Overlook along US 60 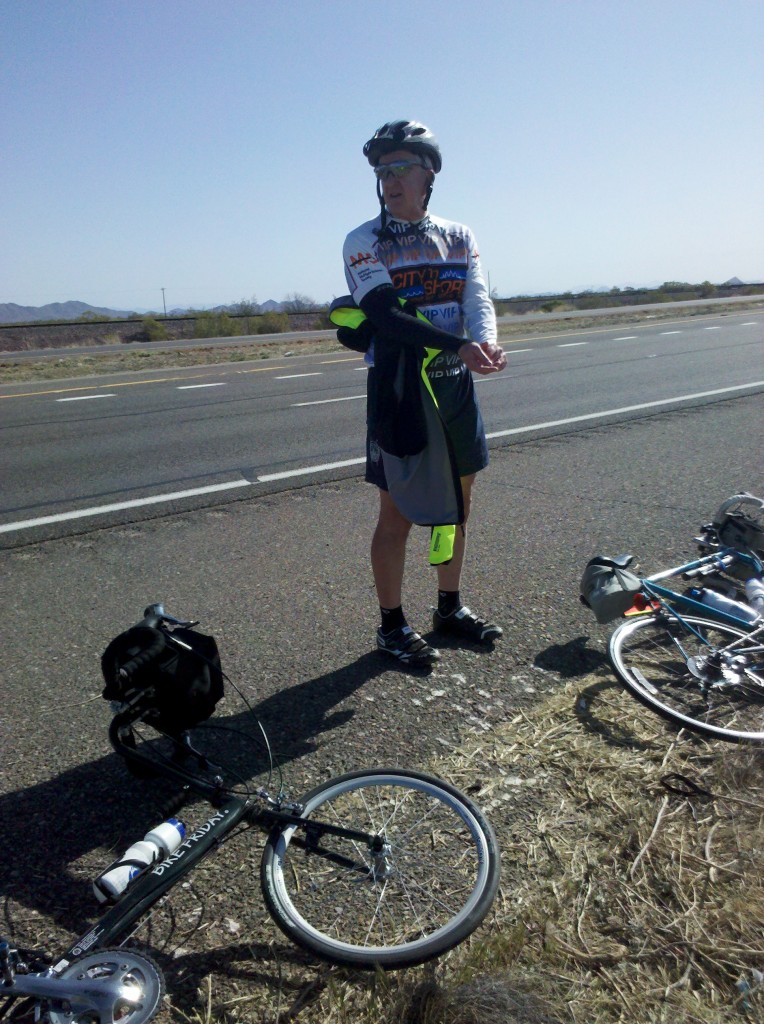 Tim at a rest stop at Wittman, AZ along US 60 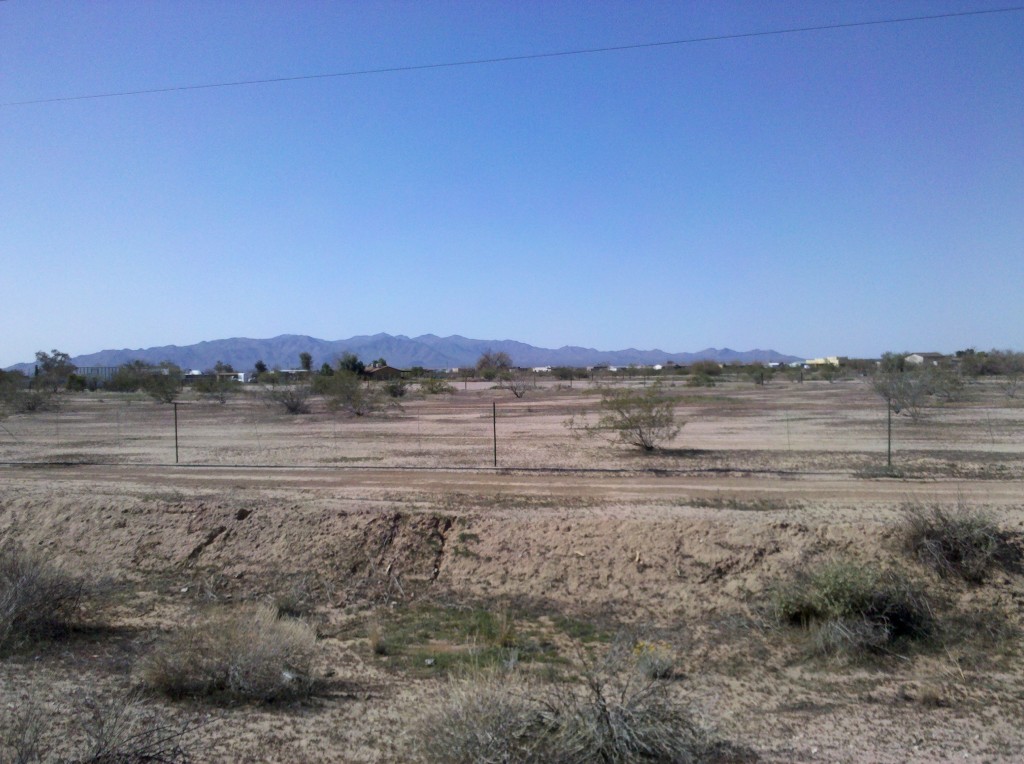 View of Wittman, AZ and mountains along US 60 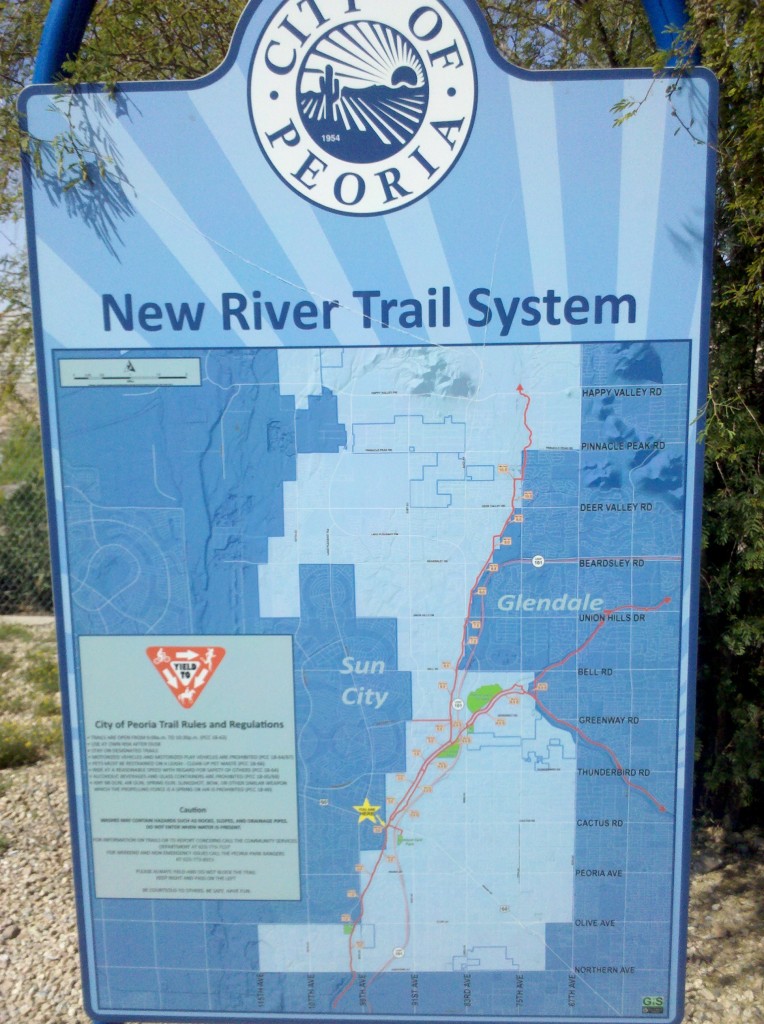 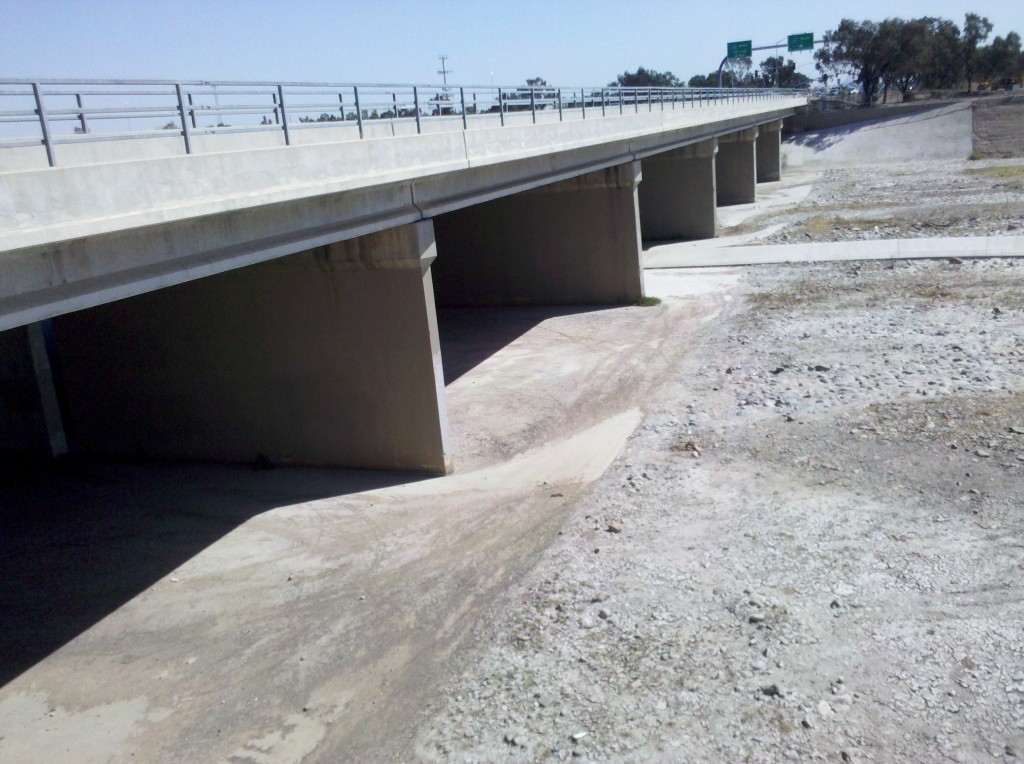 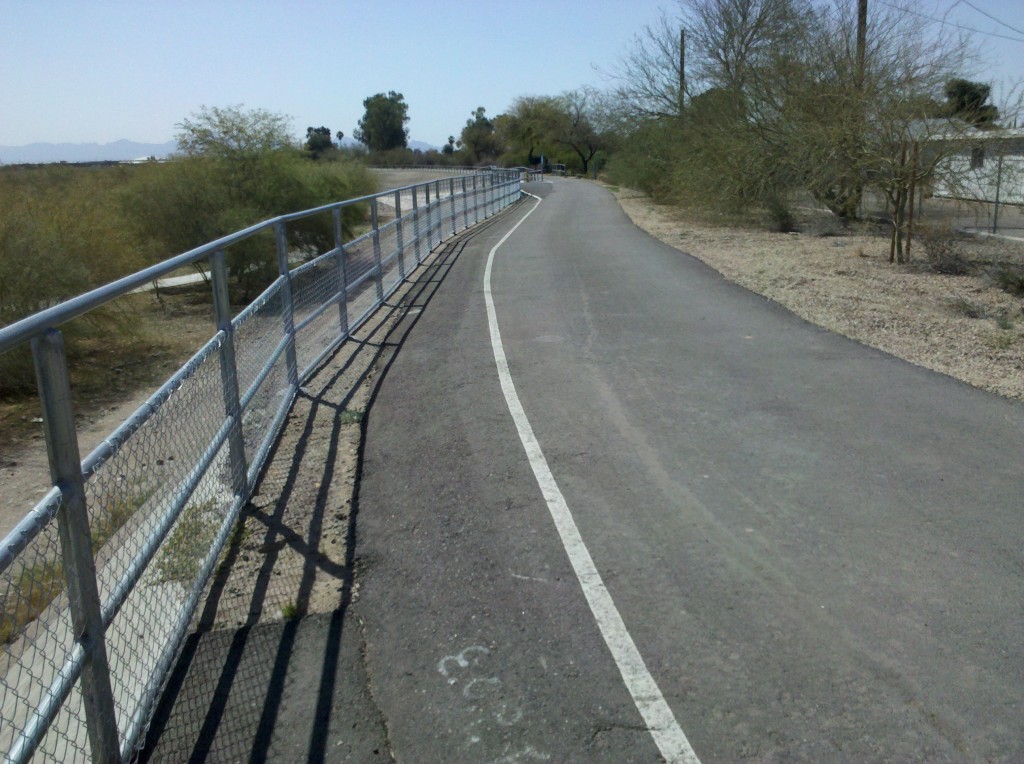 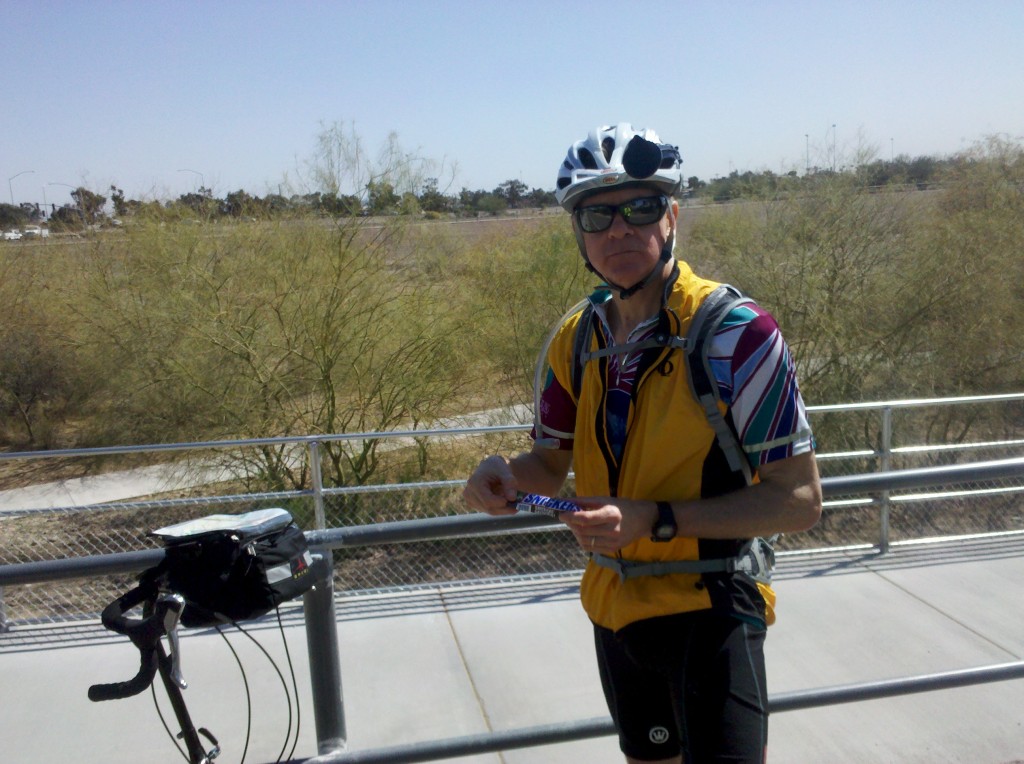 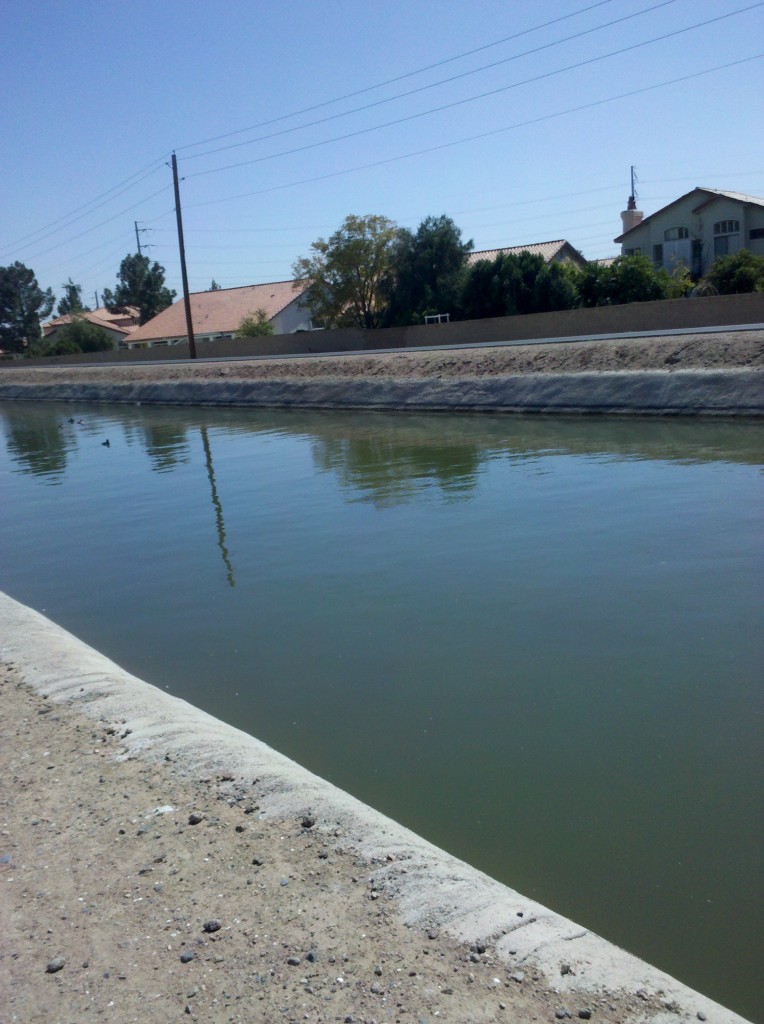 View of the Arizona Canal in Peroria, AZ 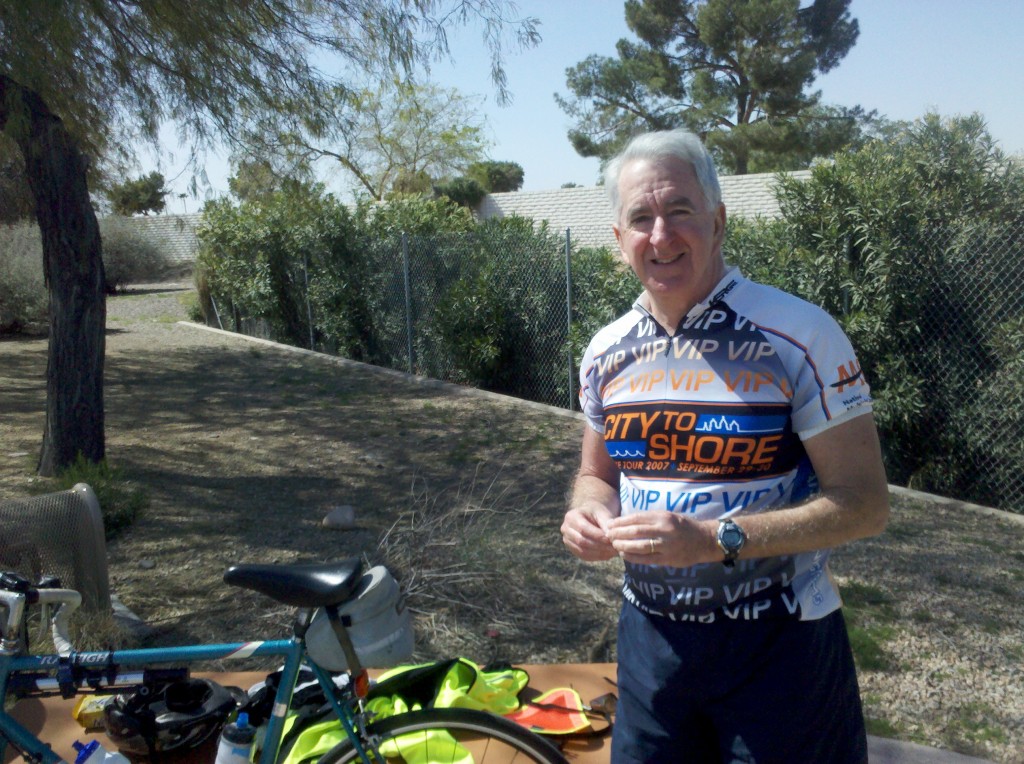 Tim at a rest stop along Arizona Canal in Peoria, AZ 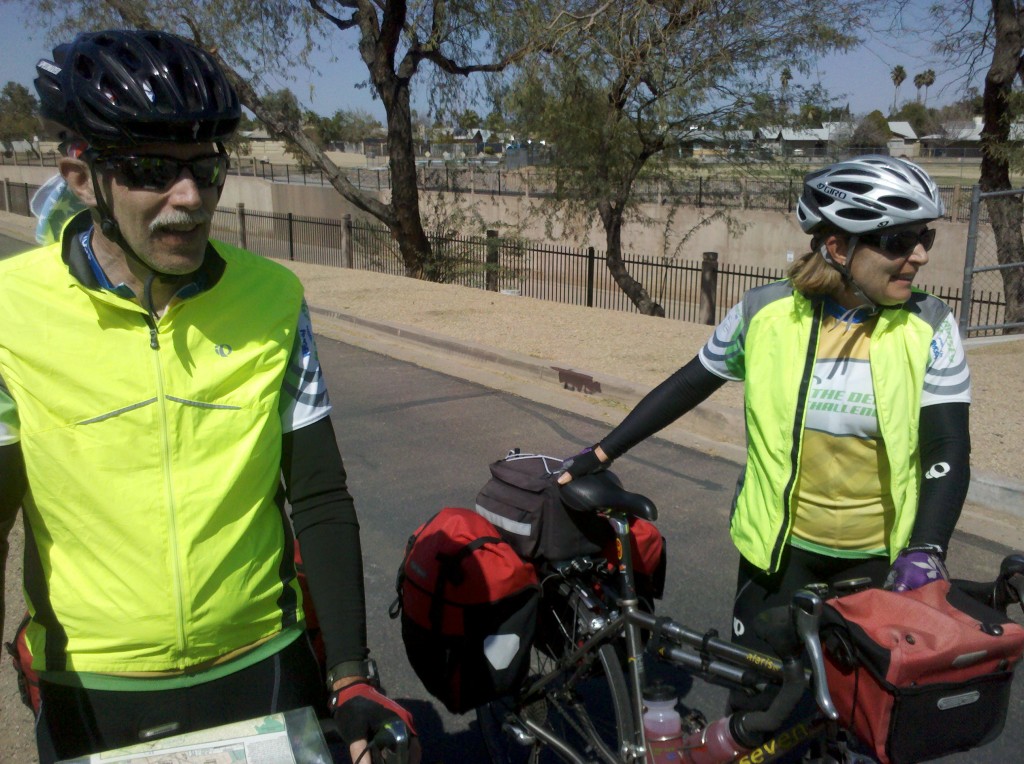 Tim and Kathryn Tolford along the Arizona Canal in Phoenix, AZ 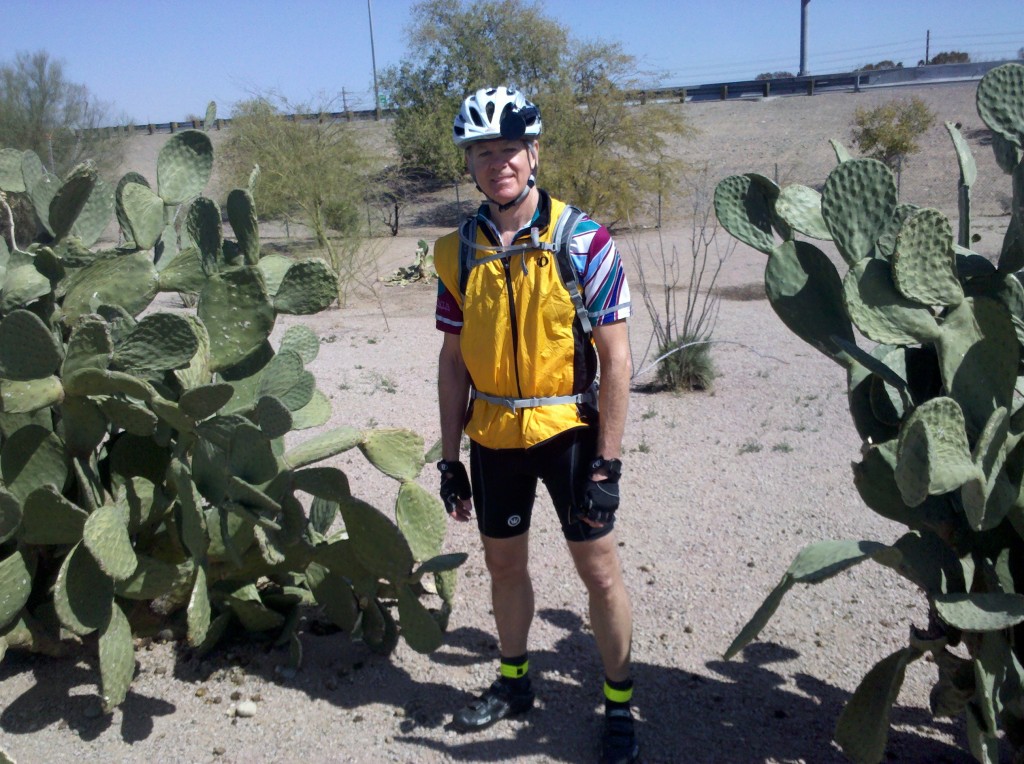 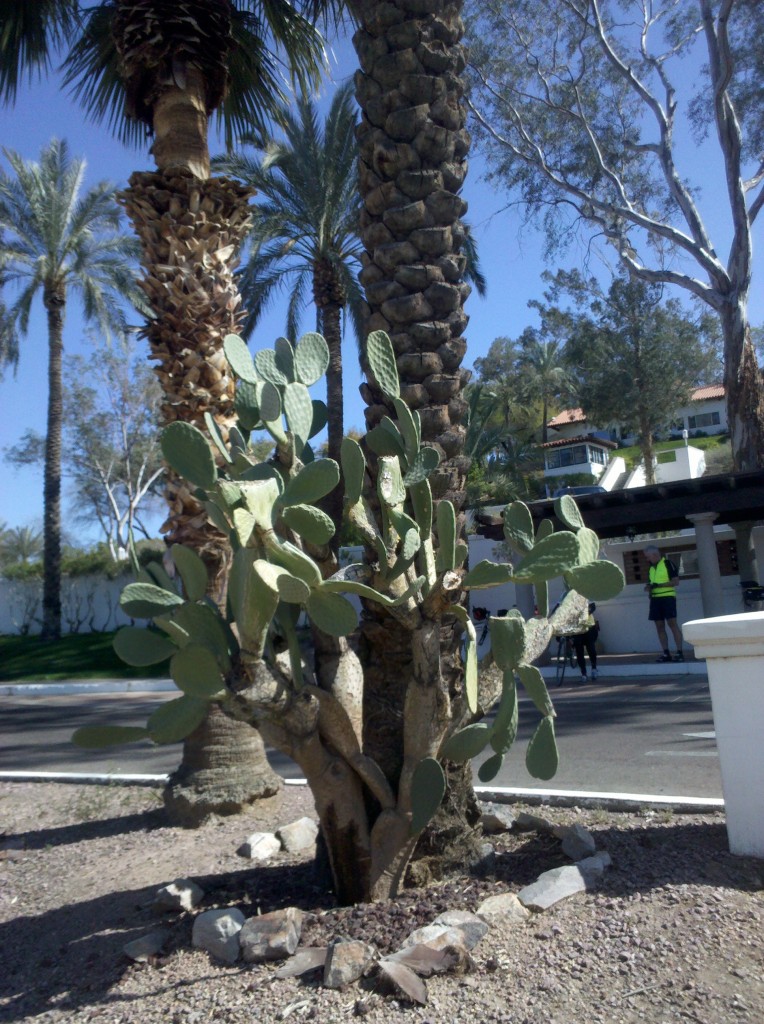 When we were about 10 miles from our hotel in Tempe, AZ, we came across the Wrigley Mansion, not too far from the Biltmore Estates in Phoenix, near its border with Scottsdale.  While there, we met up with four casual bikers, out for a short day’s ride.  It turns out these folks were full-time RVer’s who winter in Phoenix, summer in the mountains of Northern California, and who are officially citizens of South Dakota, even though they never reside or even visit South Dakota.  They pay no taxes in South Dakota, which apparently wants their citizenship to enable them to have an opportunity for greater representation in Congress.  Here is a photo of these very pleasant folks: 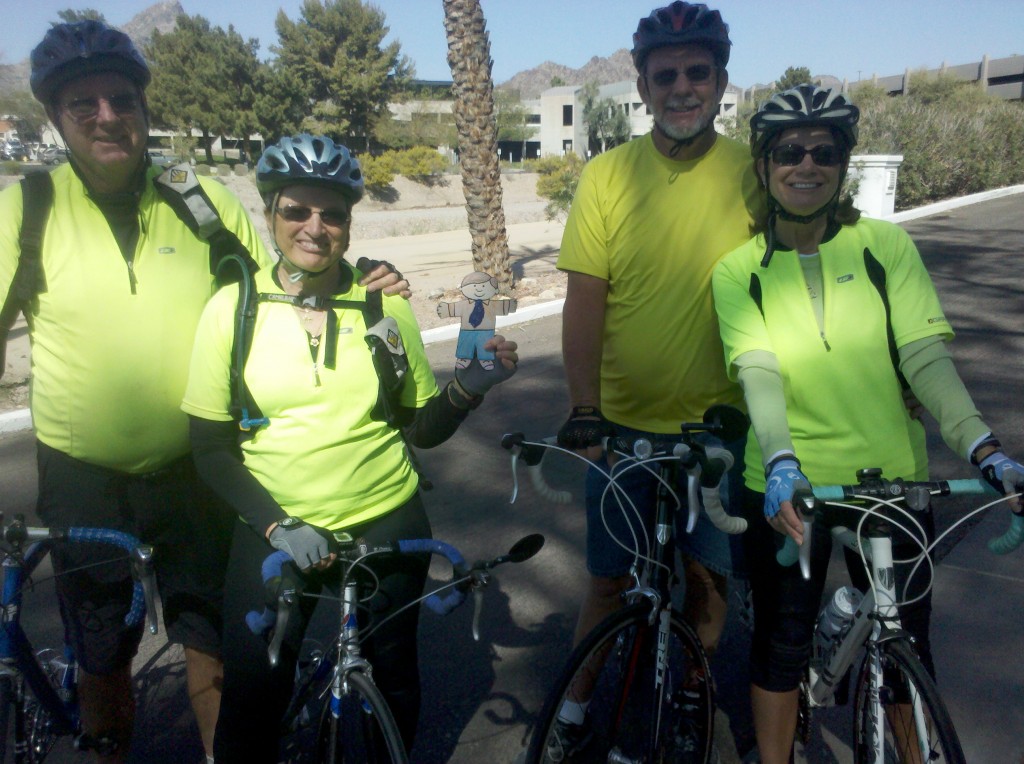 After saying our goodbyes to the “South Dakotans” and to Tim and Kathyrn Tolford (who had ridden with us along the Arizona Canal for 8-10 miles, we headed to Tempe and to our hotel. 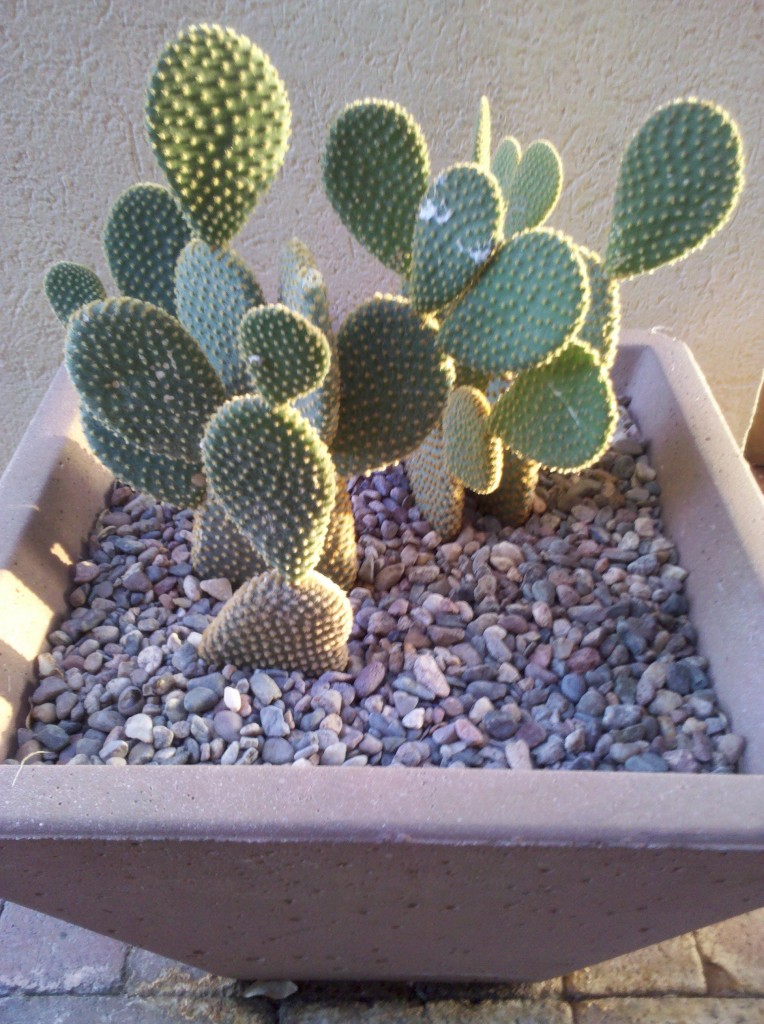 Once there I called Beth to determine her location and our room arrangements and, as she has this whole trip, Beth had several cold beers on ice waiting for us. 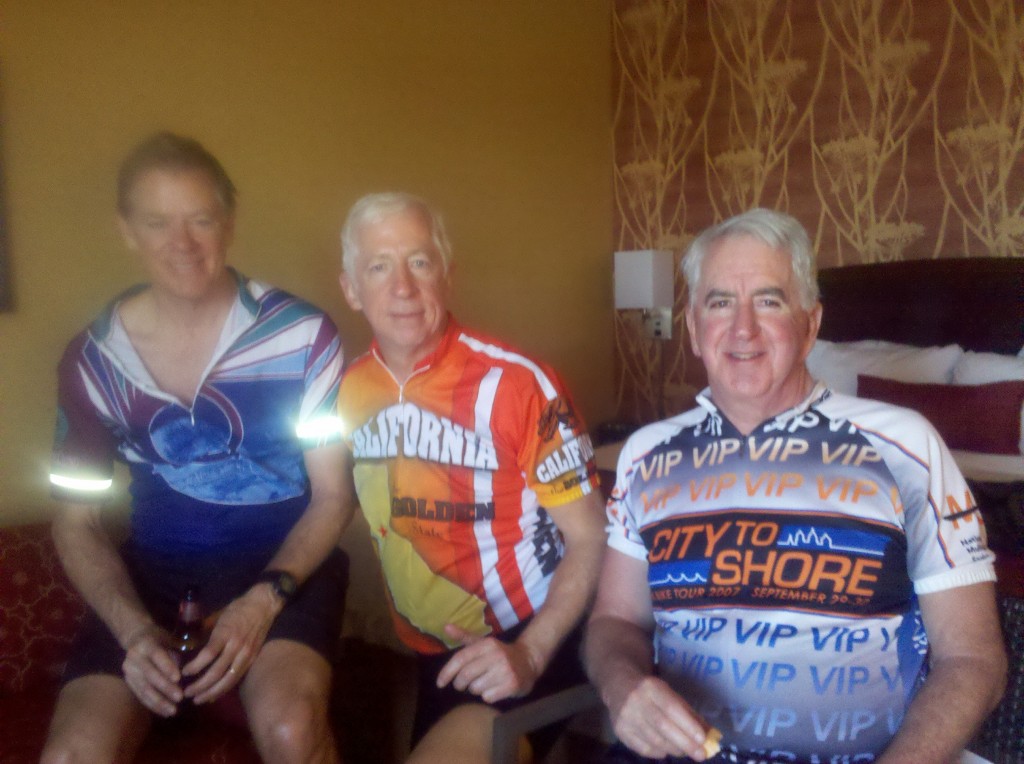 Mark, Brian and Tim enjoying a cold one after final ride to Tempe, AZ

After a few bottles each, except for Tim who is not into beer too much these days – he only had one so there’s more for Mark and me – we showered and dressed and went to dinner in downtown Tempe.  We talked about our high points, low points, and the songs that went through our heads during the entire trip.  Maybe I’ll have something to say about that in my last post for this leg!

4 comments on “March 8 – Our last day’s ride from Wickenburg to Tempe, AZ”