I’ve been trying to work as little as possible on this trip — it’s hard to care about a broken image on a website visited by eight people a month (hi, I’m a web designer) when there are new landscapes to explore and new beers to drink — but work has caught up with me these past couple of days. So I’m a little behind with the posts.

While the wind pushed the bikers into Arizona on Tuesday, I ventured back to the Courtesy Cafe for the burger they all said was so good the night before. But my real objective was to experience the decor on the diner side. It did not disappoint. 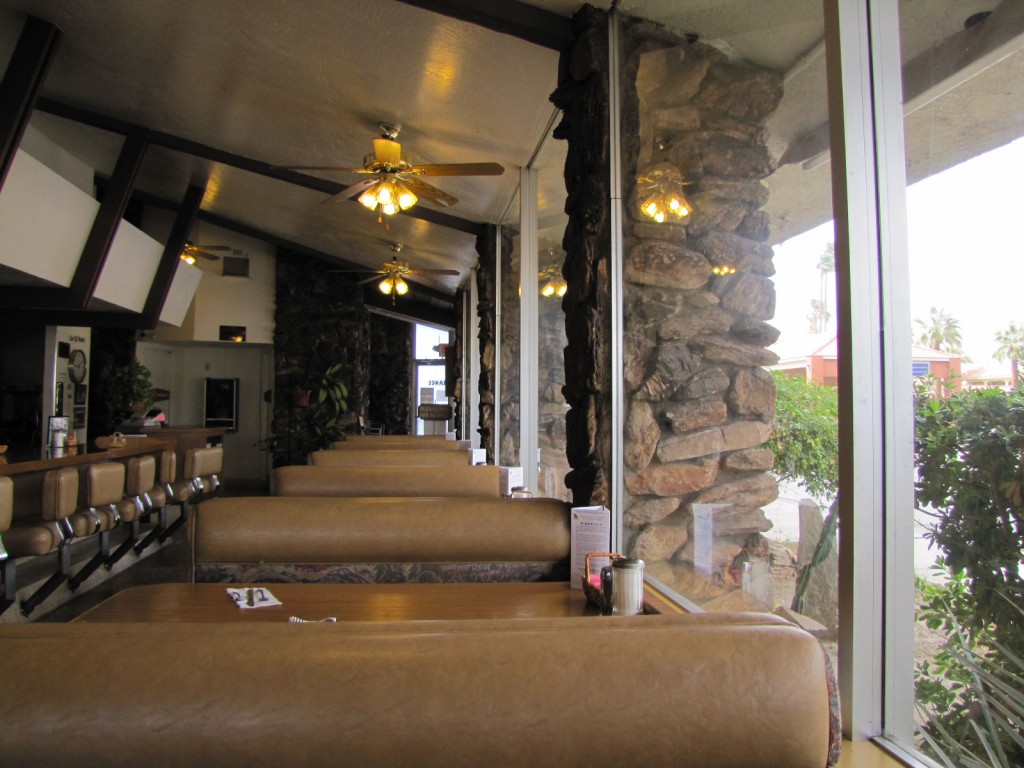 I won't bore you with detail shots, but all the signage was great, too 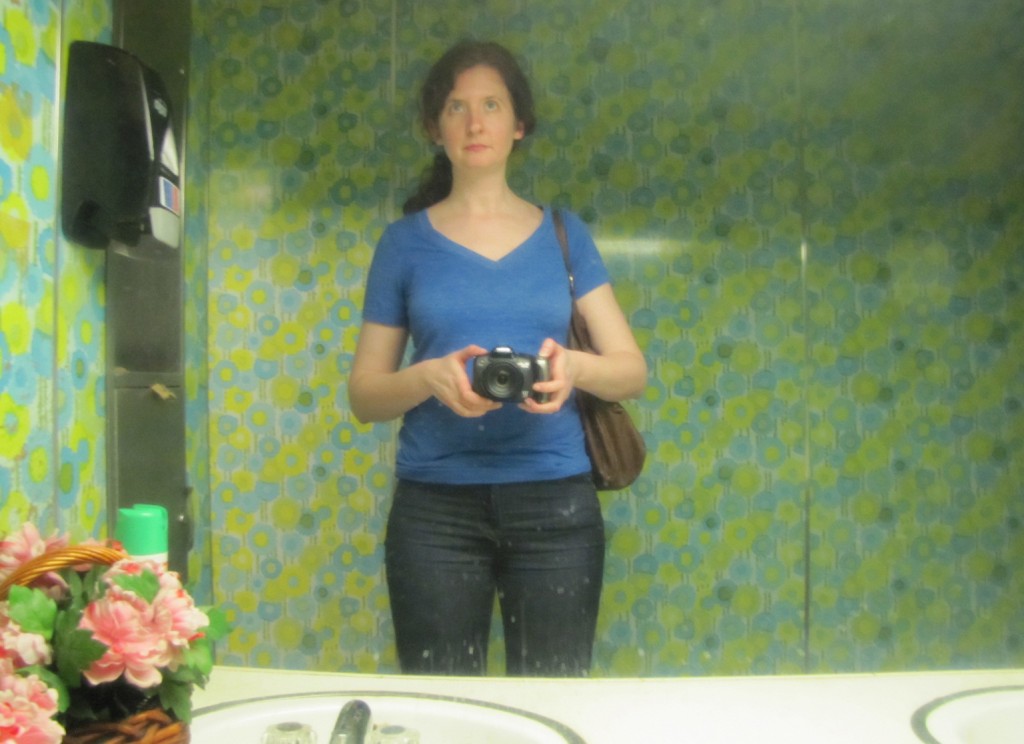 The bathroom was also delightful

Names I was called by the waitress over four brief interactions: babe, babes, baby, hon, honey, sugar, sweetheart. Naturally. She asked me where I was driving to, I guess because I was alone, and told me she hoped the wind calmed down out there. Dad called just as I was leaving and said they were already in Salome, one hour ahead of Google’s bike directions estimate. I climbed into Great White and switched on the radio, pumped for a quick and easy ride.

The toughest thing about these drives has been finding suitable music to jam to. Throughout the barely populated stretches of California and Arizona, radio stations come in strong for a few songs, then quickly fade to fuzz. I always seek out classic rock, hoping to land on an Allman Brothers tune, because, as evidenced in Field of Dreams, you can’t go wrong with the Allman Brothers on a long drive. Unfortunately for me, California classic rock channels have a Don Henley problem, in that they play Don Henley. Does anyone actually like “Dirty Laundry?” Well, I heard it. And yeah, I sang along, because that’s what you do when you’re on the road. Kick ’em when they’re up, kick ’em when they’re down. I know I quoted the Eagles earlier, too, but that was an in-joke between me and Great White. I hate the Eagles. And they’re the only band I’ve heard on three different drives during this trip.

The radio’s been so bad that my best sing-along of this sojourn has been to Crosby, Stills, & Nash’s “Southern Cross.” Somehow I know pretty much all the words to this song, and the whole thing came in loud and clear. THINK ABOUT HOW MANY TIMES, I HAVE, FALL-HALLEN! Great White was totally cool with me messing up all the tricky harmonies, too.

Second best sing-along was to Tom Jones’ “It’s Not Unusual,” a song that makes no sense.

Wait, you have to watch his crazy hip moves in this video (it’s short, I promise).

Anyway, advice to my SAG Wagon successor: Bring CDs. Or one of those iPod radio connector thingies.

It took me less than an hour to make it to Salome. I was glad that the guys had beat me to the motel, because we were worried about what it would be like. There were four rooms total and you had to pay in cash. There was no website. You had to call the owner an hour before you got there. It just sounded like it might be scary.

Turns out the Westward Motel was by far the coolest place we stayed. Magical is the best word for it; it instantly felt like home, though it looked nothing like our actual homes. If you are traveling through this area of the country, call Rande Wolters, owner of The Westward Motel, at 208-610-3516 and make a reservation. You will not regret it. 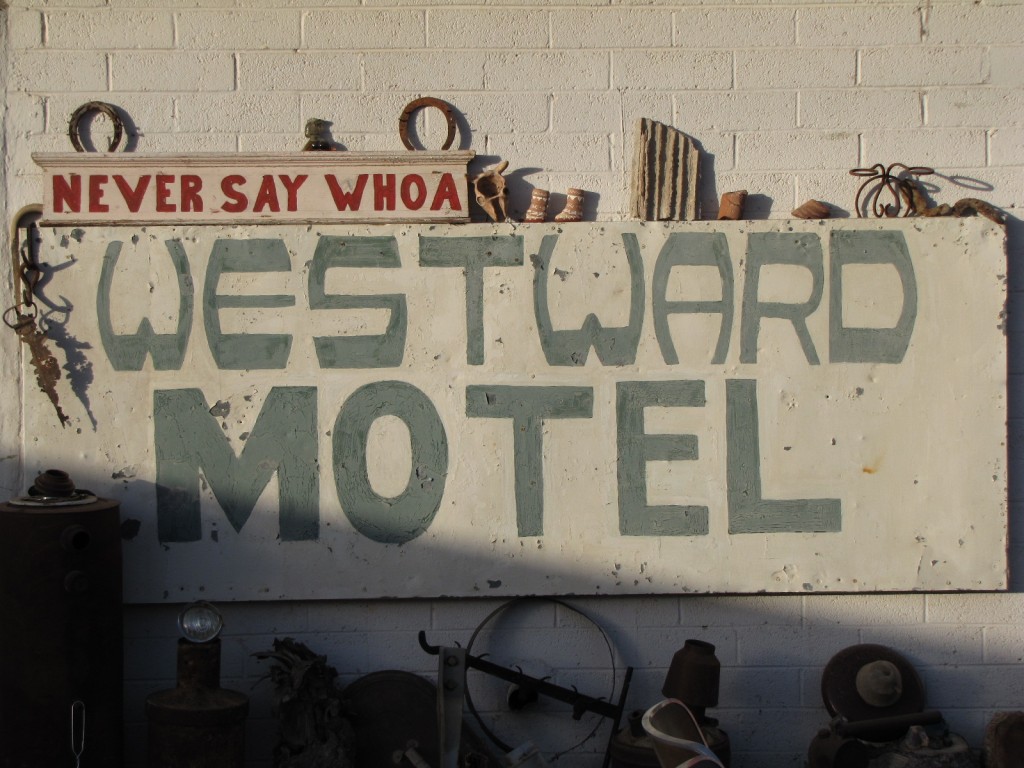 When I got there, beer and snacks were waiting. I sat in a wooden rocking chair and ate Triscuits and contemplated the fact that I was in Salome, Arizona. Dad looked through a book from 1915 about Arizona’s history and showed me pictures of things that struck his fancy. Then Mark and I went shopping for ingredients that were to become an awesome pasta and salad dinner. 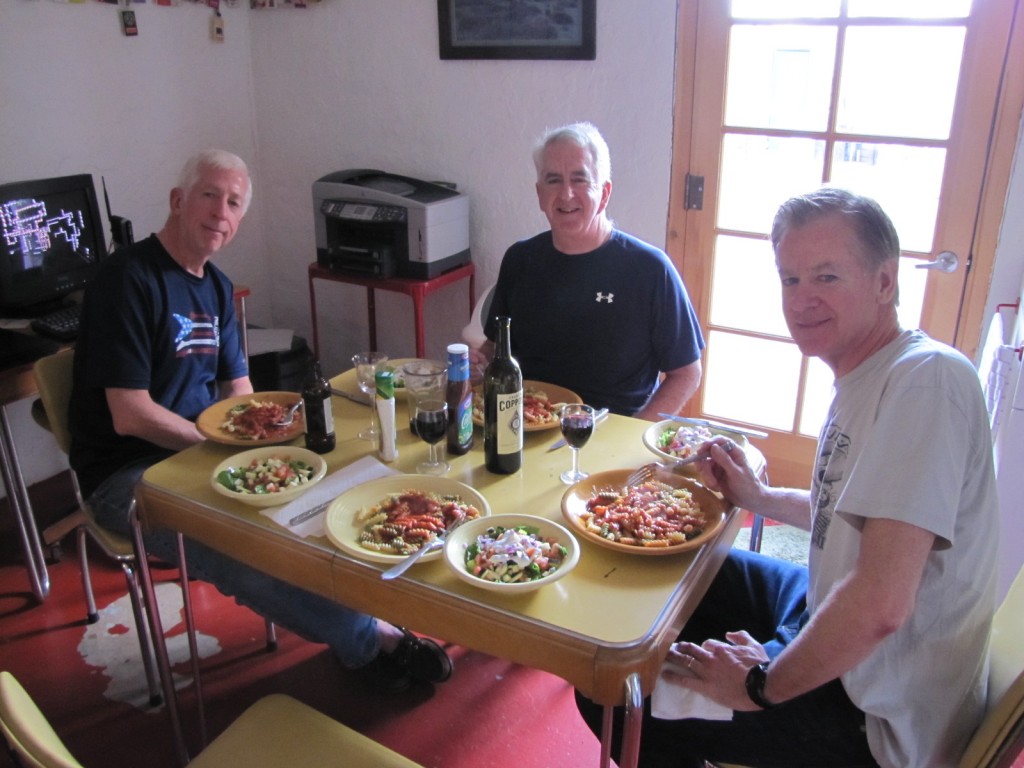 You wish you could have eaten this meal

After we ate, Tim read to us from Conquering the Borderlands, which inspired the trip. 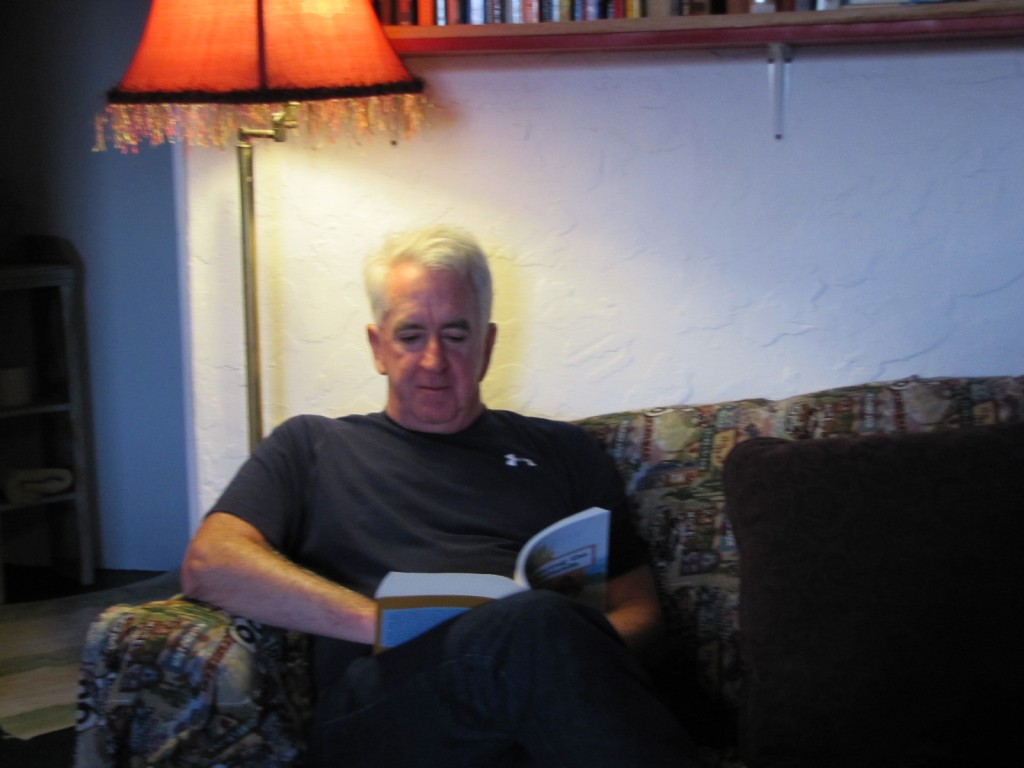 Then we talked politics for a while — in this group, the Democratic, Republican, and Independent parties are all represented — and, after polishing off two bottles of wine and plenty of Milanos, we retired to our rooms for a fantastic sleep. Want to see more shots of The Westward Motel? Sure, here you go: 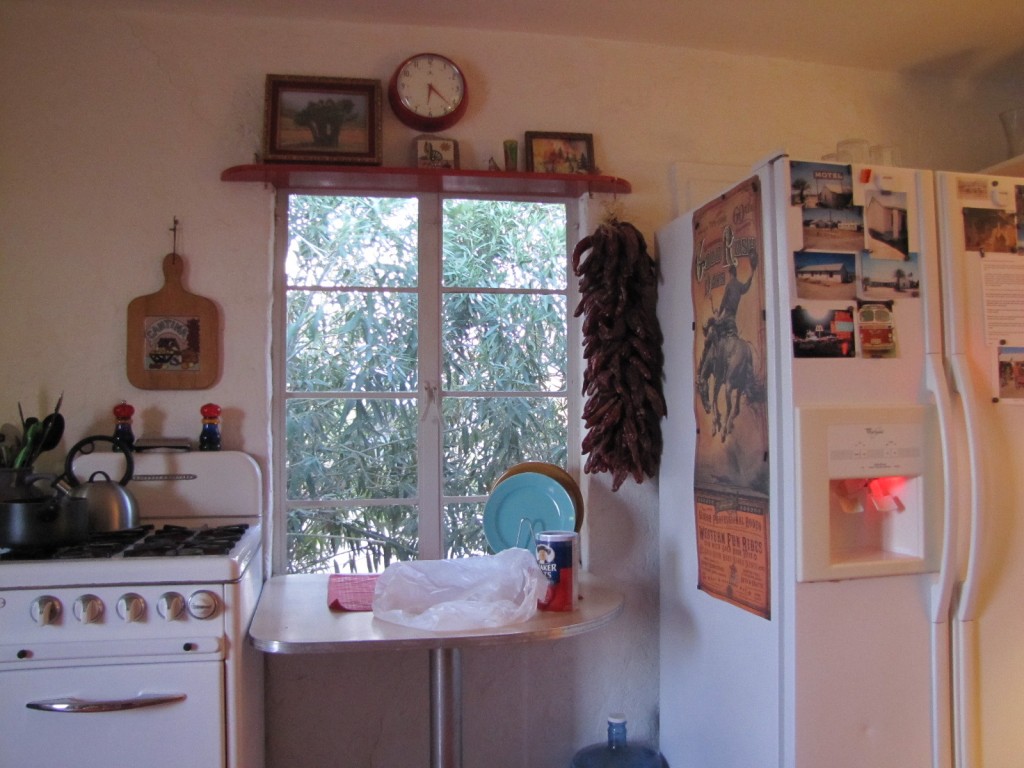 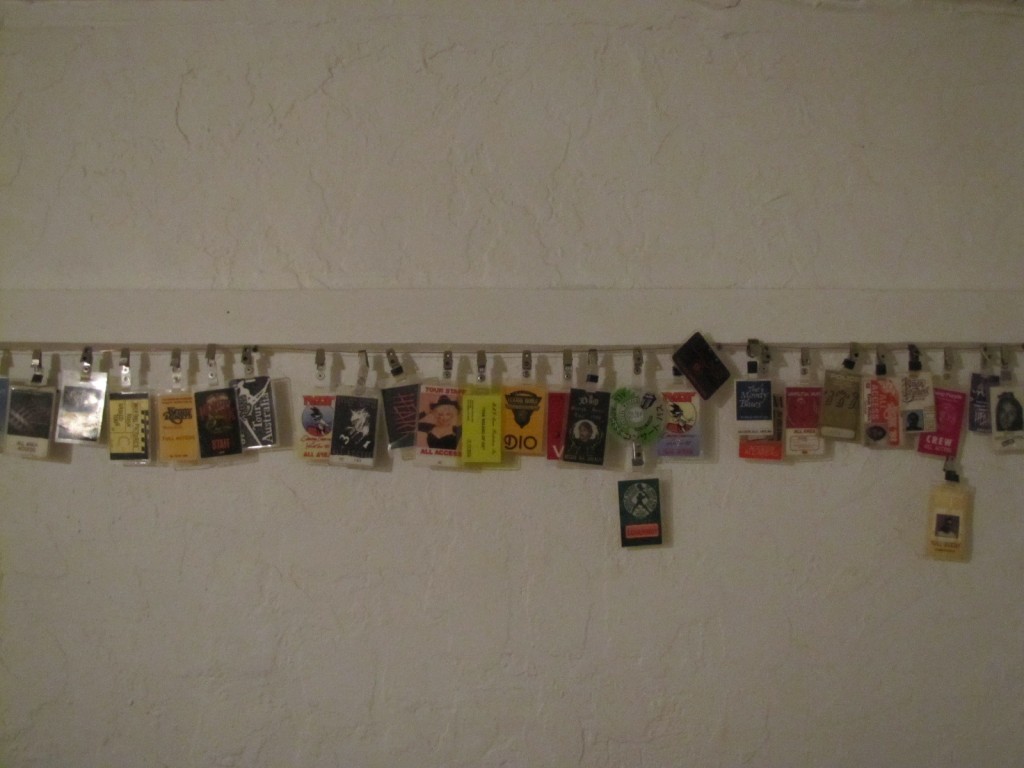 Rande used to be a roadie — he worked on shows for the Stones, Dolly Parton, Heart, David Bowie, the Police, and many others in the '70s and '80s 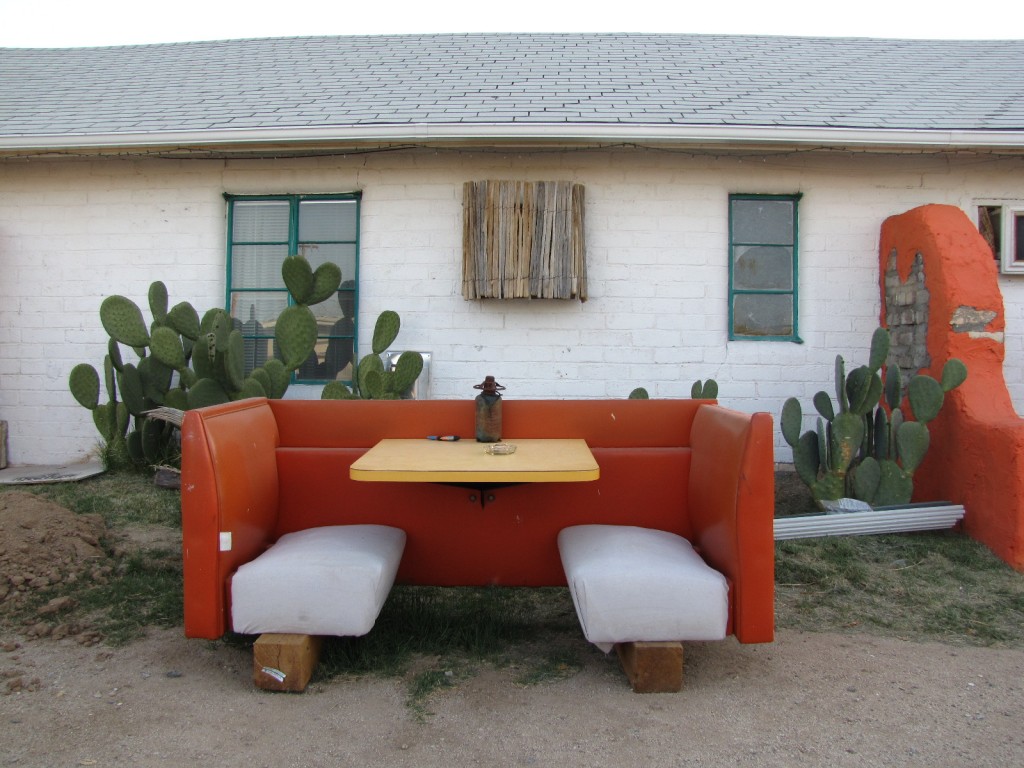 If it'd been warmer, we could have eaten outside 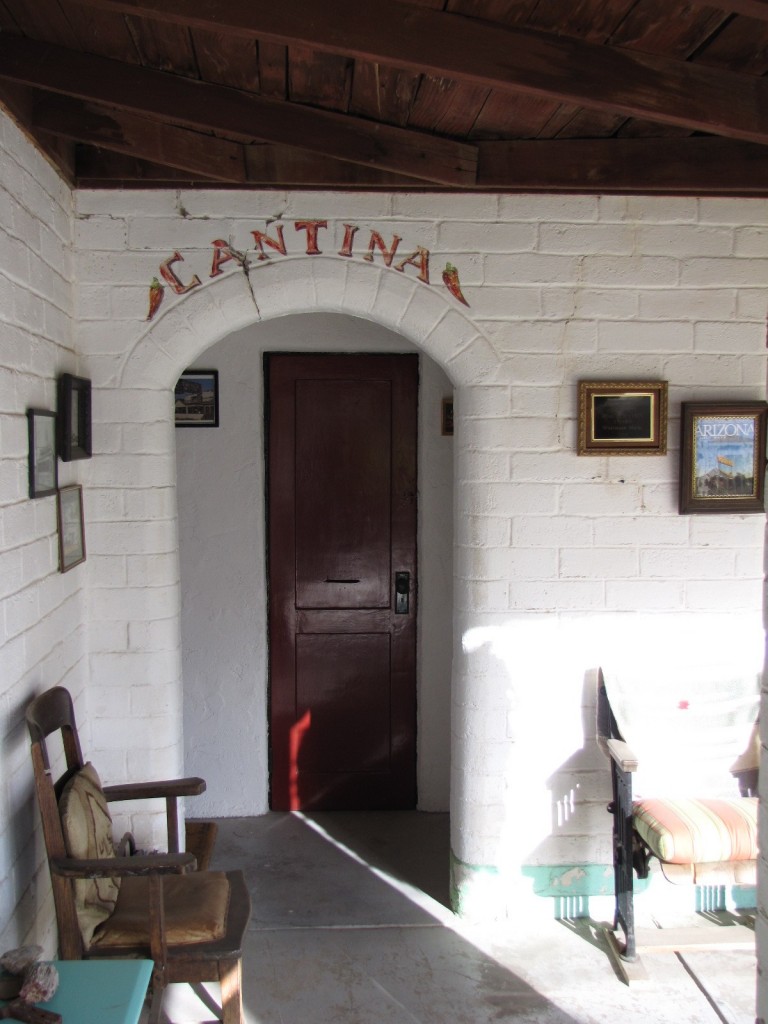 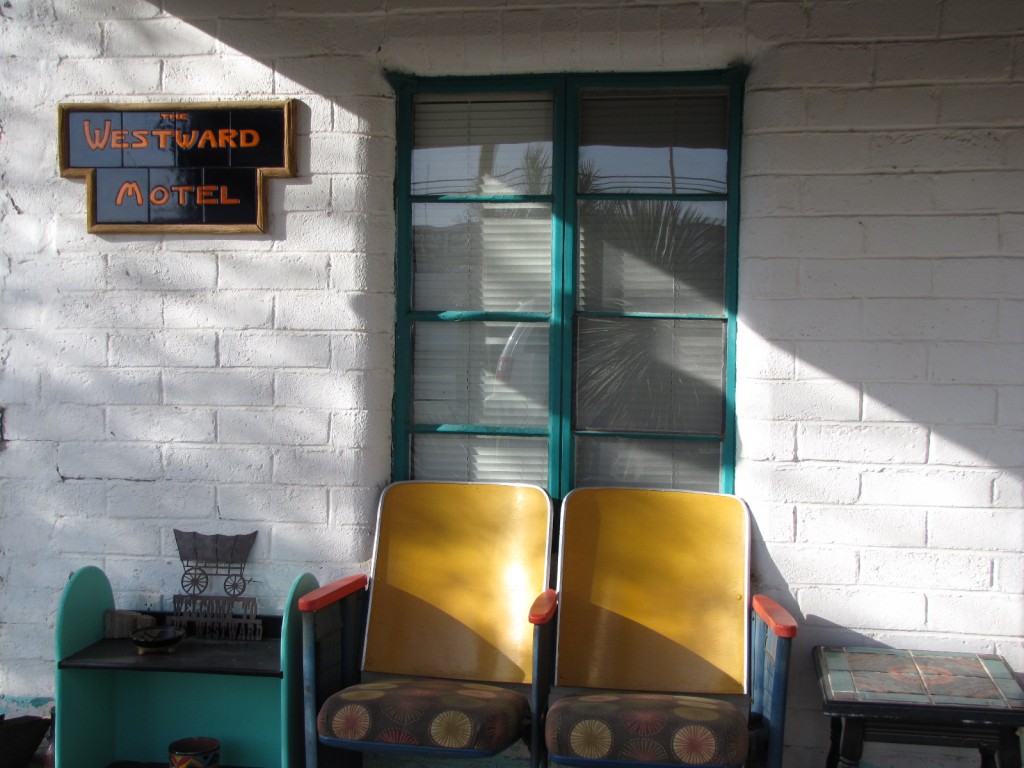 If I can ever come up with the slightest reason to go back to Salome, I’m staying at The Westward Motel again. And I’m taking seven people with me.