We started out in Blythe, CA at around 7:00 am, fully expecting another day of headwinds and climbing.  The climbing part was accurate – we climbed more that 1500 feet.  But fortunately the headwinds part was not – we finally had a strong and beneficial tailwind.  What a difference that makes!

We crossed into Arizona fairly early and went onto I-10 heading east shortly after getting into Arizona.  Here are some of the pictures we took early this morning. 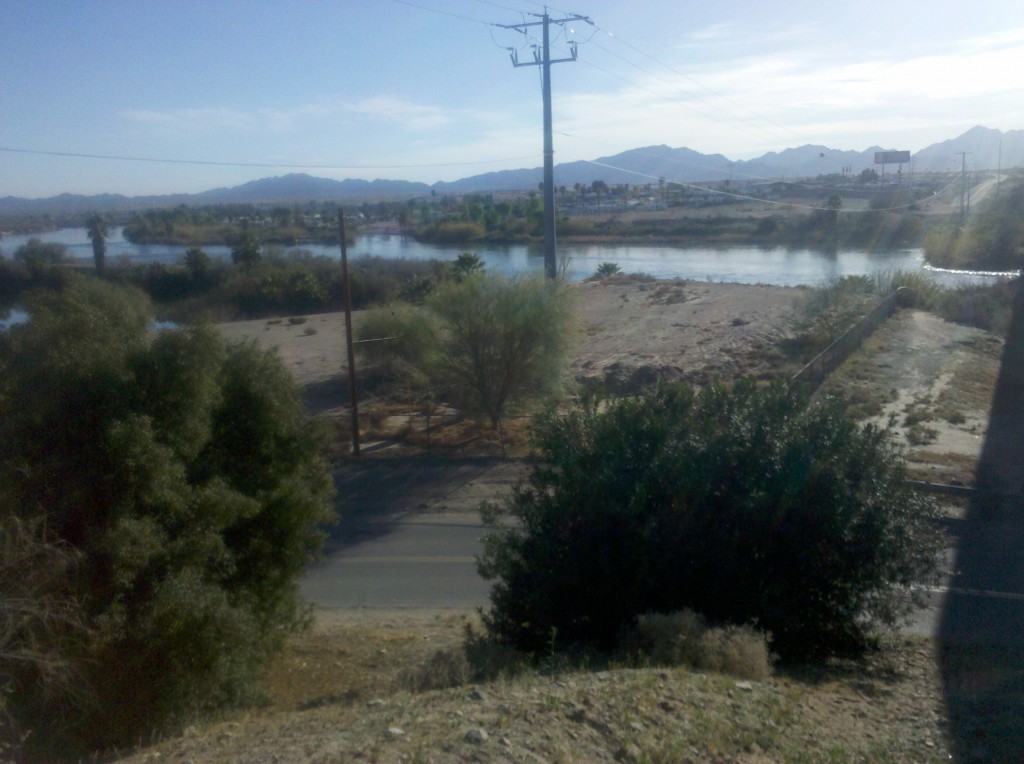 Crossing the Colorado River around 7:30 am 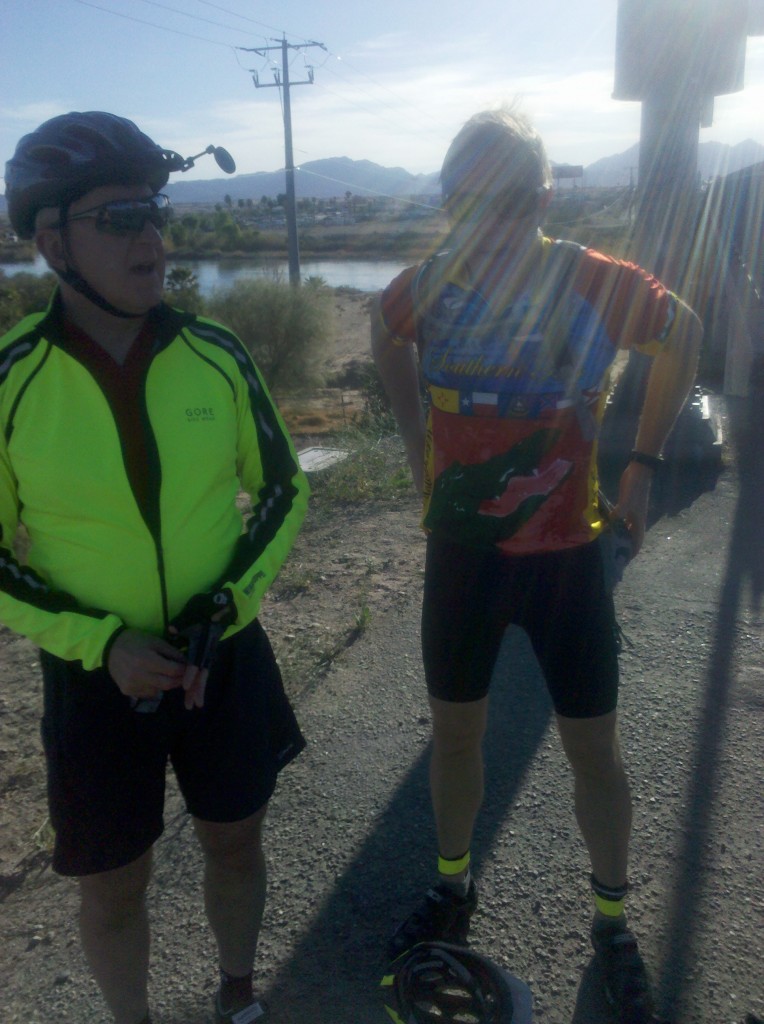 Tim and Mark on CA side of Coloroda River 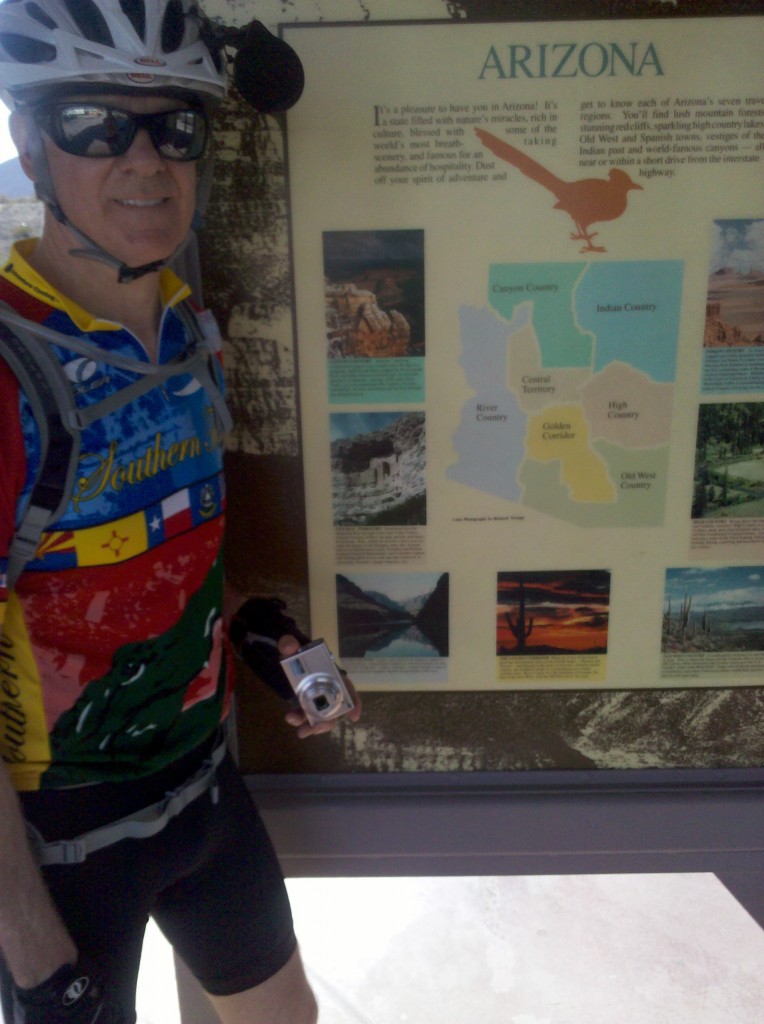 Mark at rest stop on I-10 just indide AZ 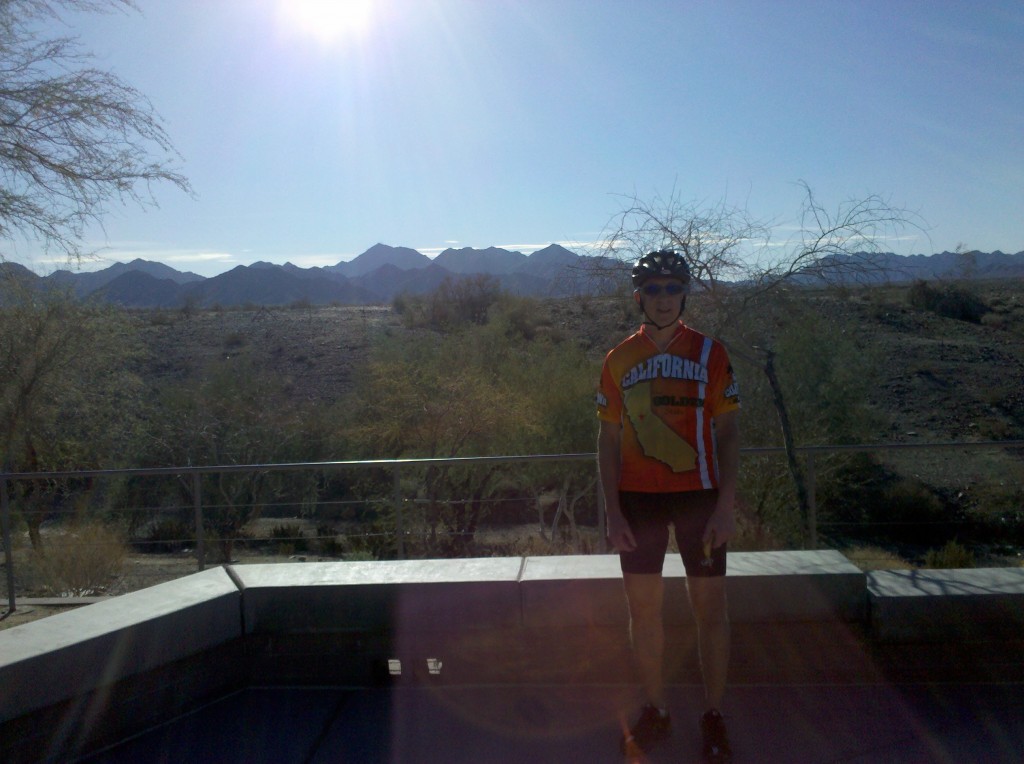 Brian at rest stop on I-10 just inside AZ 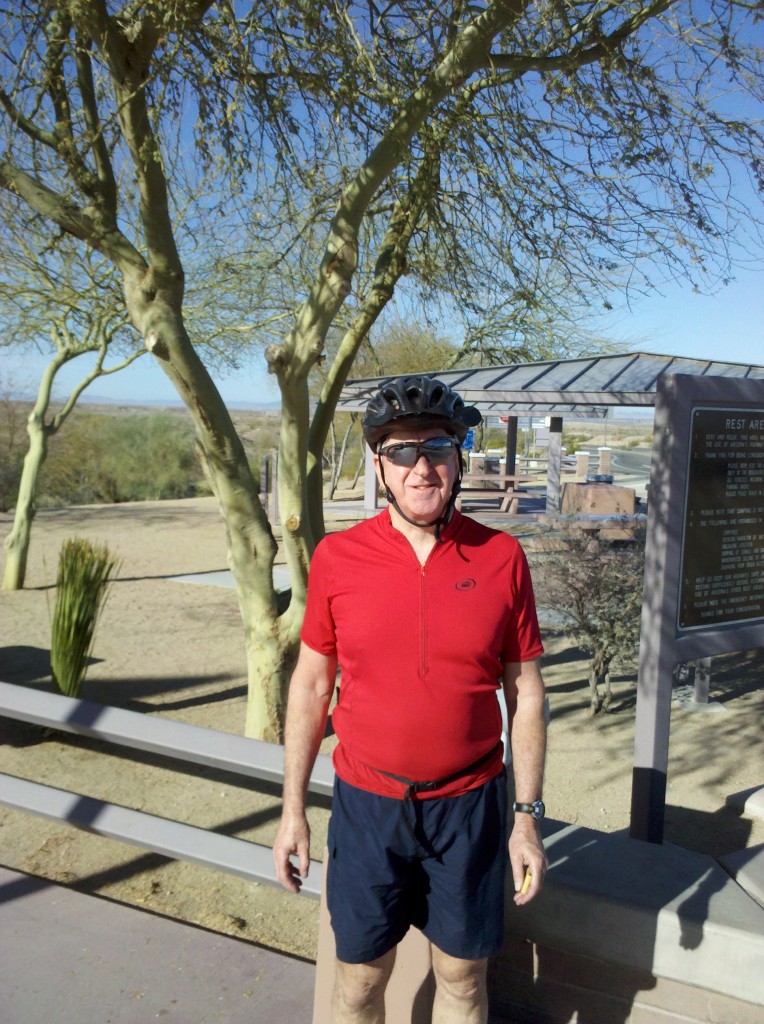 We stayed on I-10 East for another 25 miles or so, but while on I-10 East we made our way into the Sonora Desert and came across our first Sagaura,  the giant cactus that have arms coming out from the sides.  Here are some pictures of then, from when we first came saw them and stopped to take some photos: 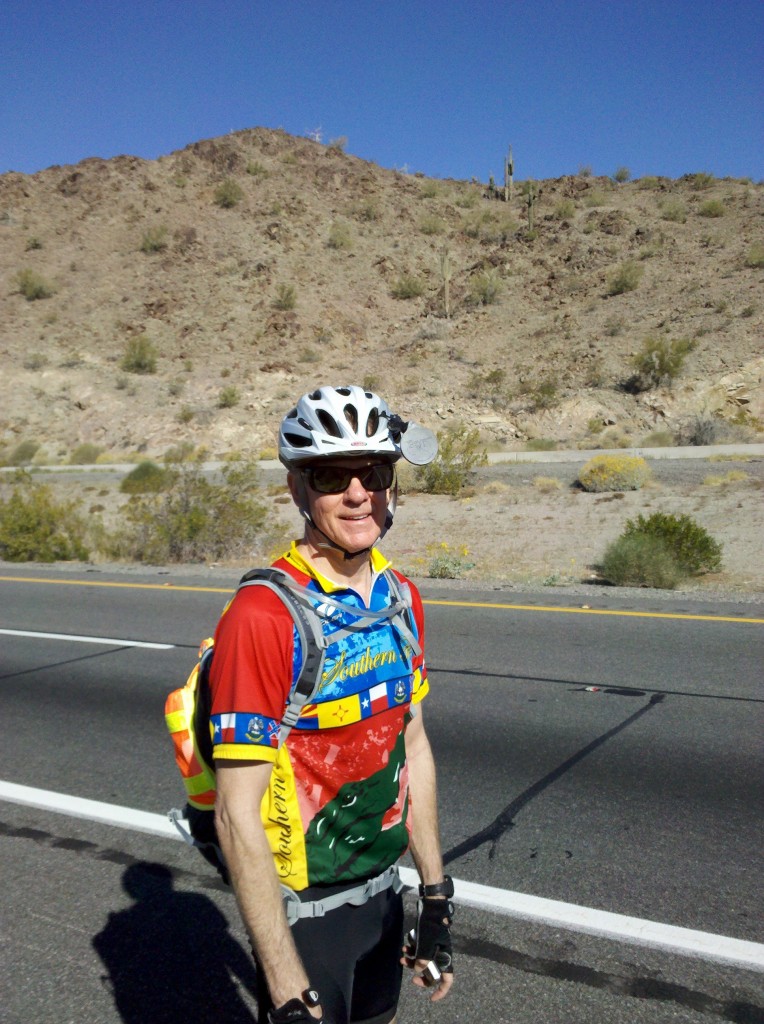 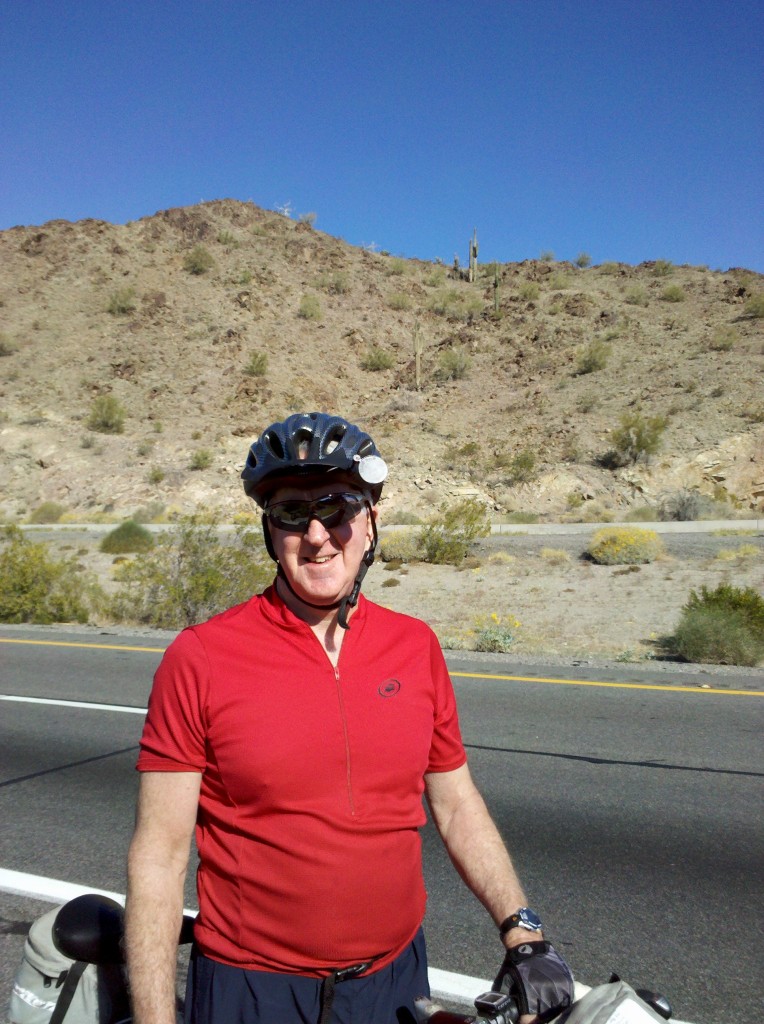 Our next stop was in Quartsite, AZ, where we stopped at a Subway and purchased an early lunch.  While there we came across Tim and Katherine Tolford, from Portand, ME.  We first saw them in San Diego and they are also taking the Southern Tier bike route, making their way to Houston, TX and taking about 3.5 weeks to do that ride. 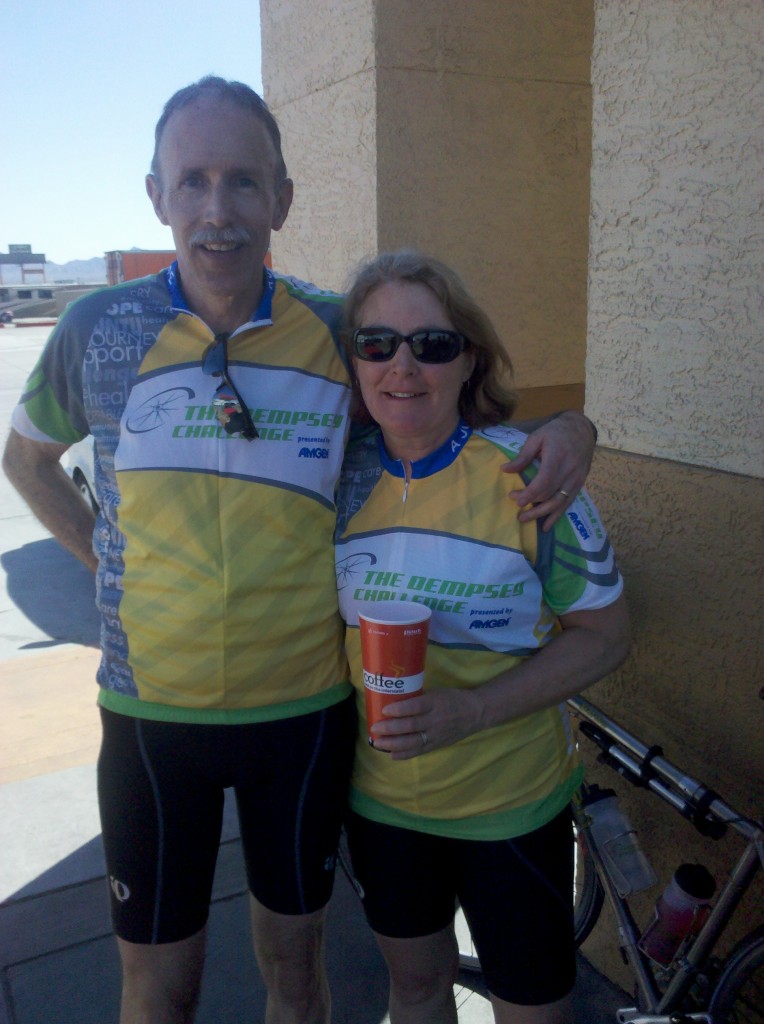 After Quartzsite, AZ we stayed on I-10 East for another 10 miles or so, exiting onto U.S. 60 East, a pre-interstate federal highway.  The road surface was good and we continued to make good progress.  Along U.S. 60 and also in Quartzsite, AZ, we noticed big Recreational Vehicle camps with lots of American and Canadian flags around the camps.  We determined that these were for “snow birds” from the U.S. and Canada, spending the winter months in the moderate-to-warm weather of Arizona.  They looked nice, but I’m not sure I’d be interested in that. 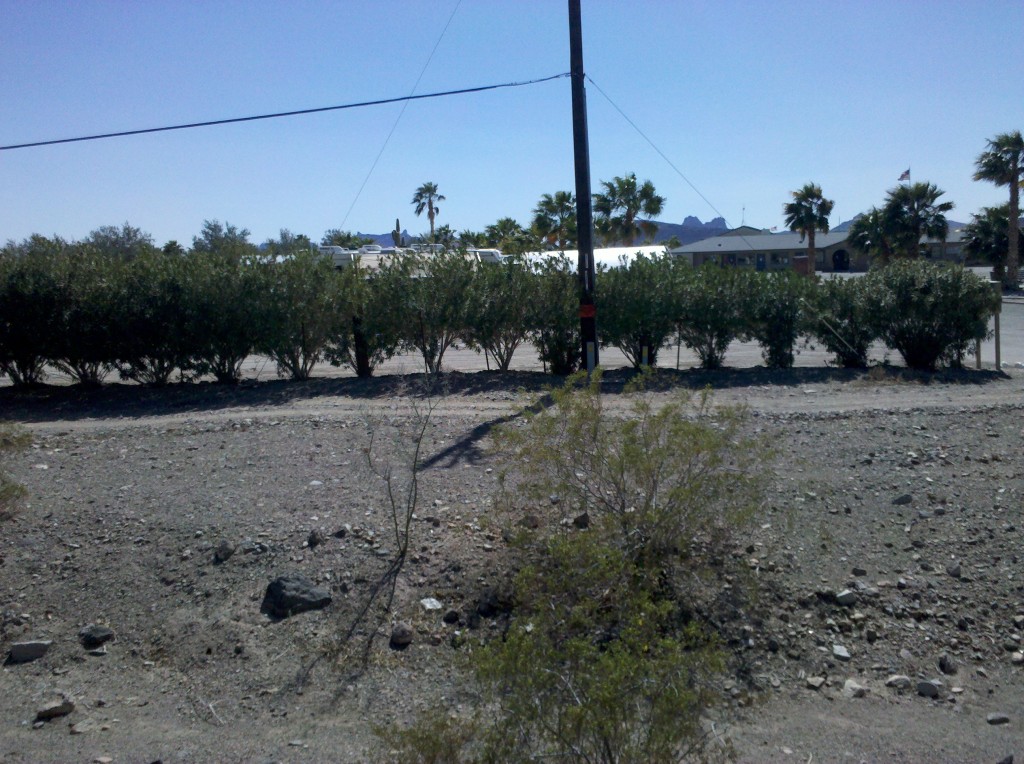 RV resort along US 60 in AZ 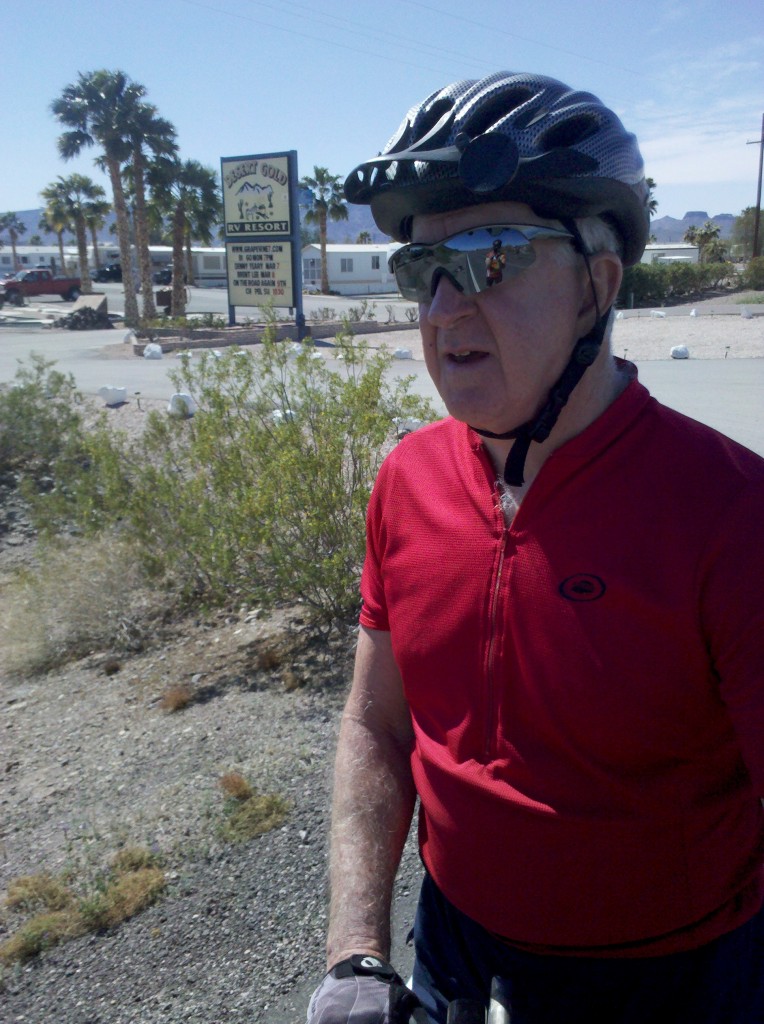 Tim in front of RV resort in AZ

We stayed on U.S. 60 East the rest of the ride to Salome, AZ.  After the RV camp, we had another 25 miles or so, but the wind was at our backs and the ride was relatively easy.  We took one more rest stop just short of Hope, AZ and took some more photos there: 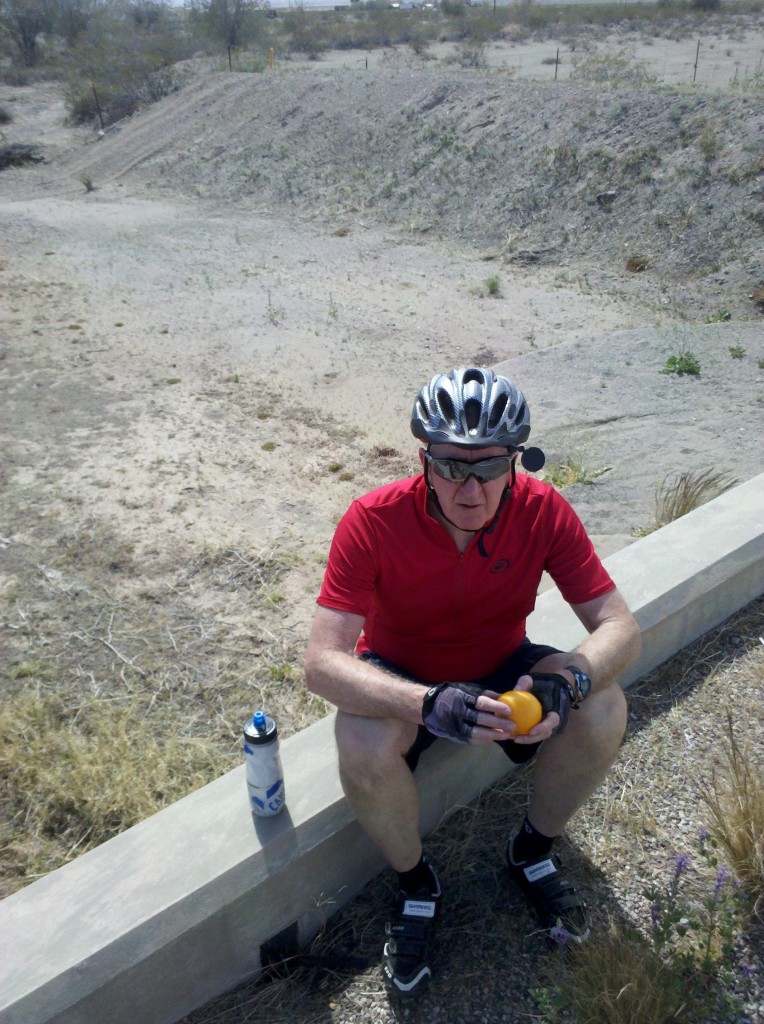 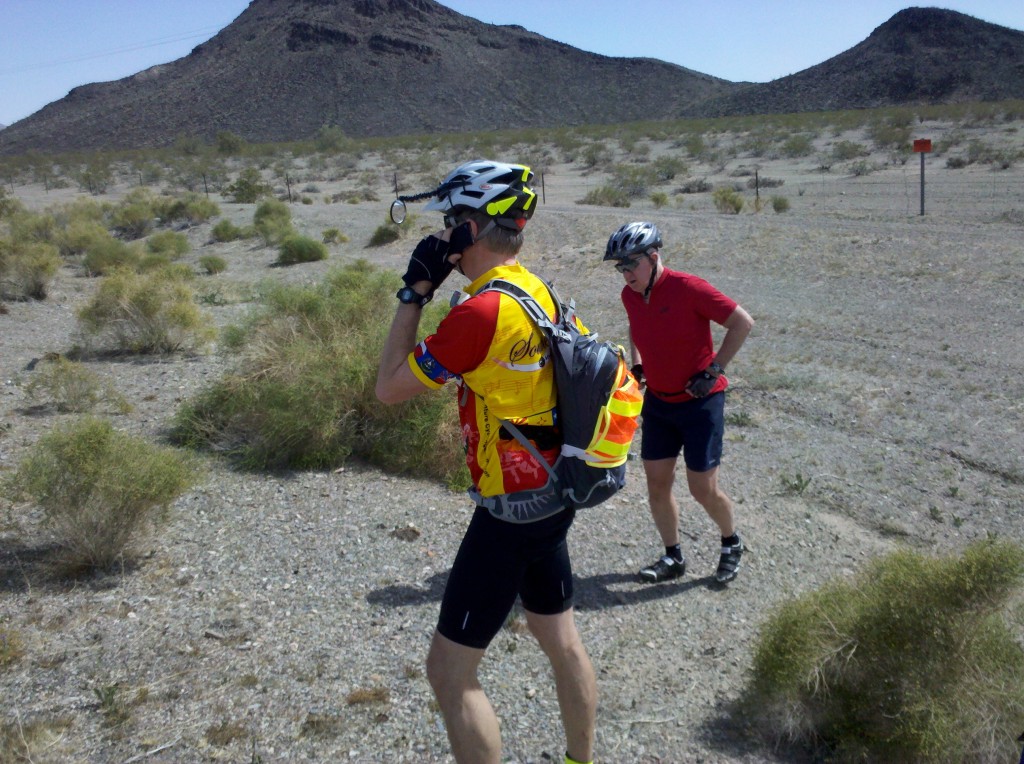 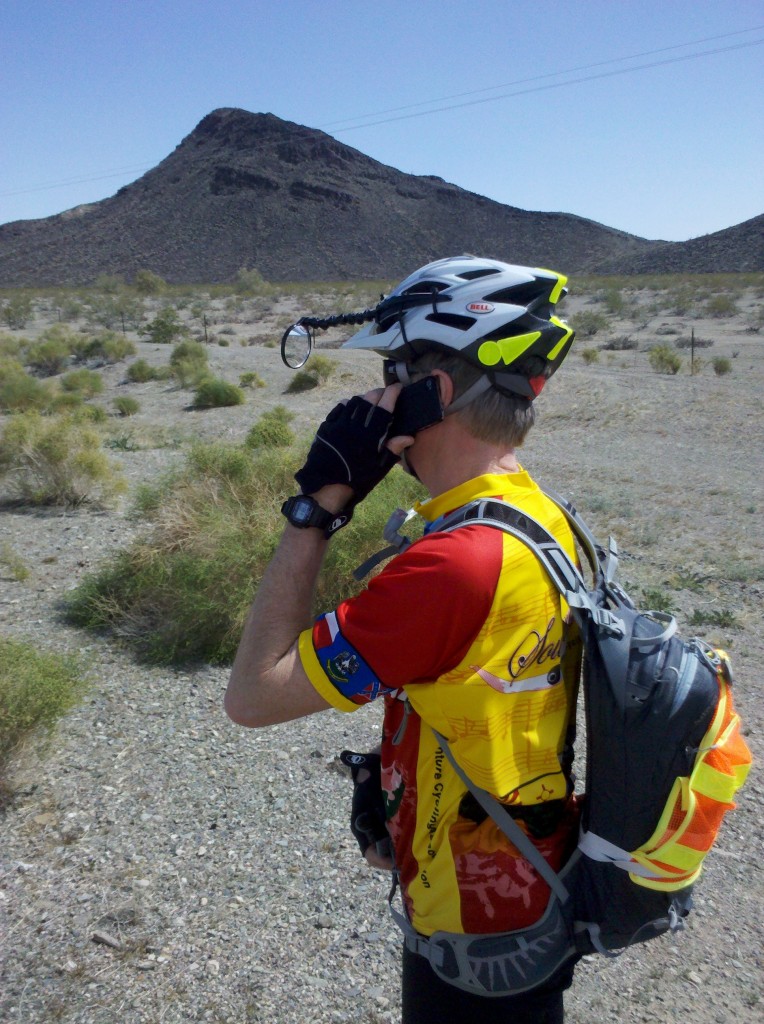 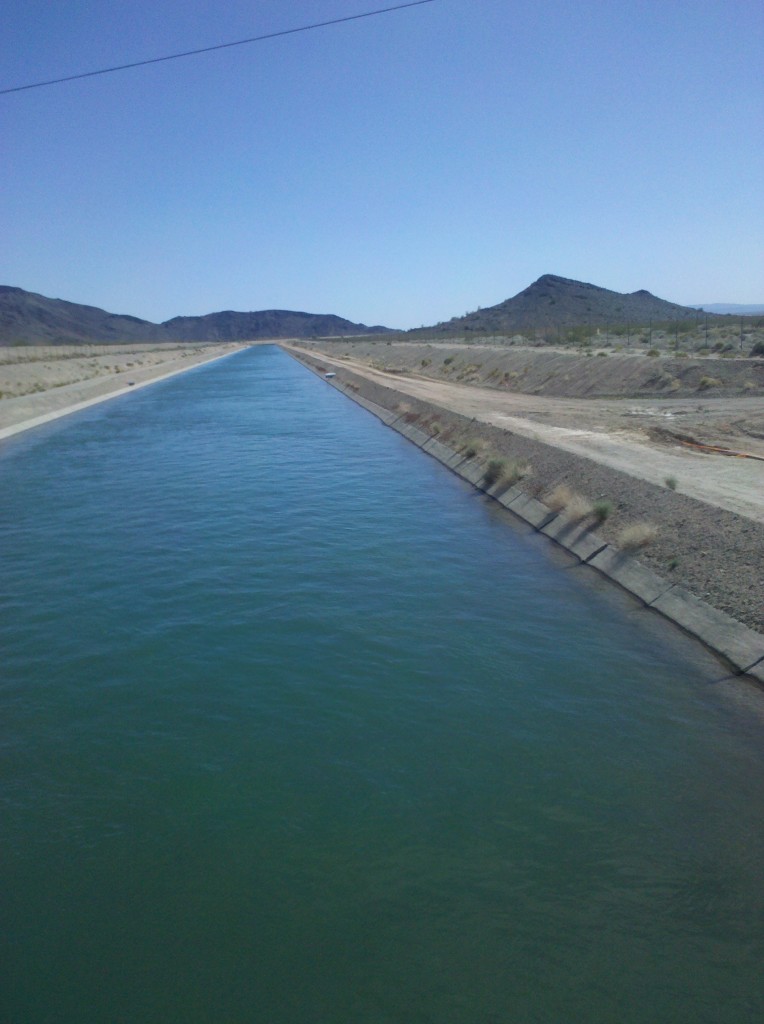 Then after passing through Hope, AZ, we came across a sign confirming that, indeed, we had passed through Hope, AZ.  The funny thing is that none of us (Mark, Tim or me) realized the lack of a proof reader for the sign until we started looking at pictures as we were preparing dinner. 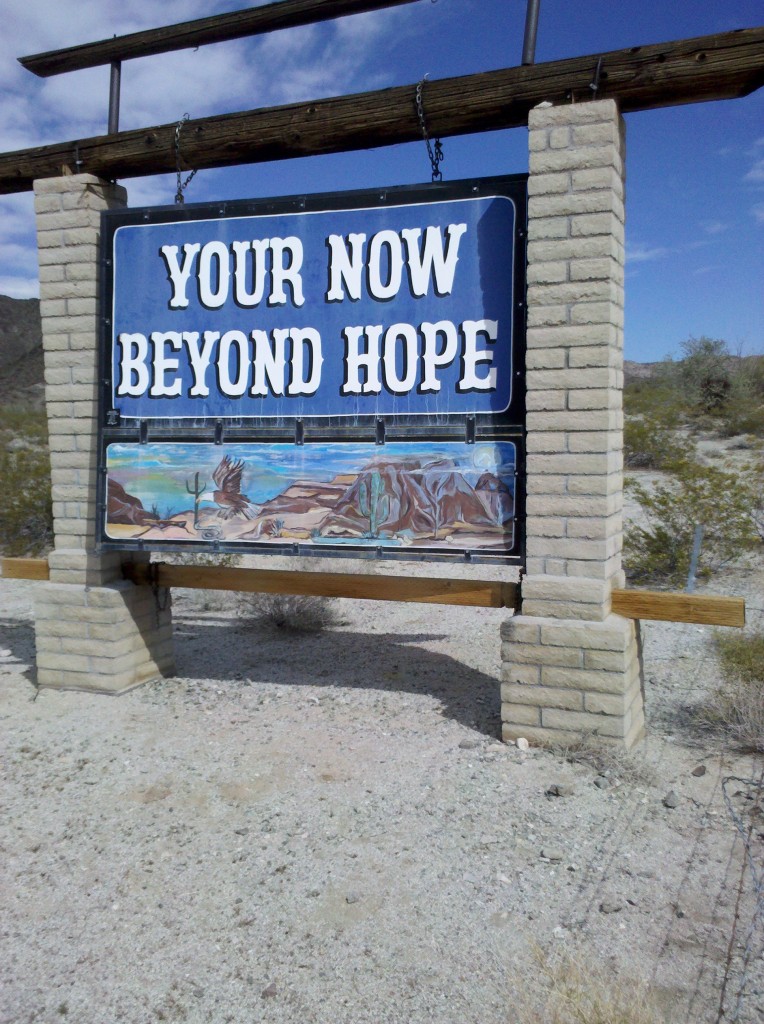 Your Now Beyond Hope sign - where is an editor when you need her/him? 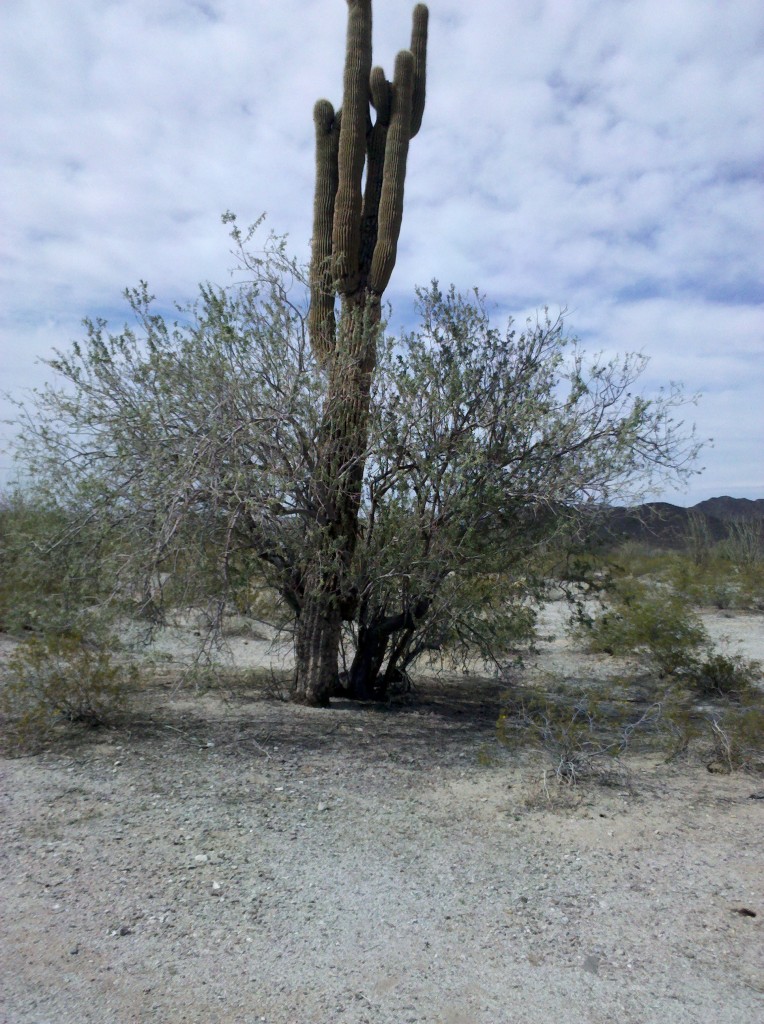 Salome, AZ was only another 6 miles or so “beyond Hope,” and although it involved one more climb, we were close enough and the wind was still at our backs, that it was relatively effortless.  After getting into Salome, we found the Westward Motel, a really nice and eclectic motel where we had a reservation.  This place is a true gem! 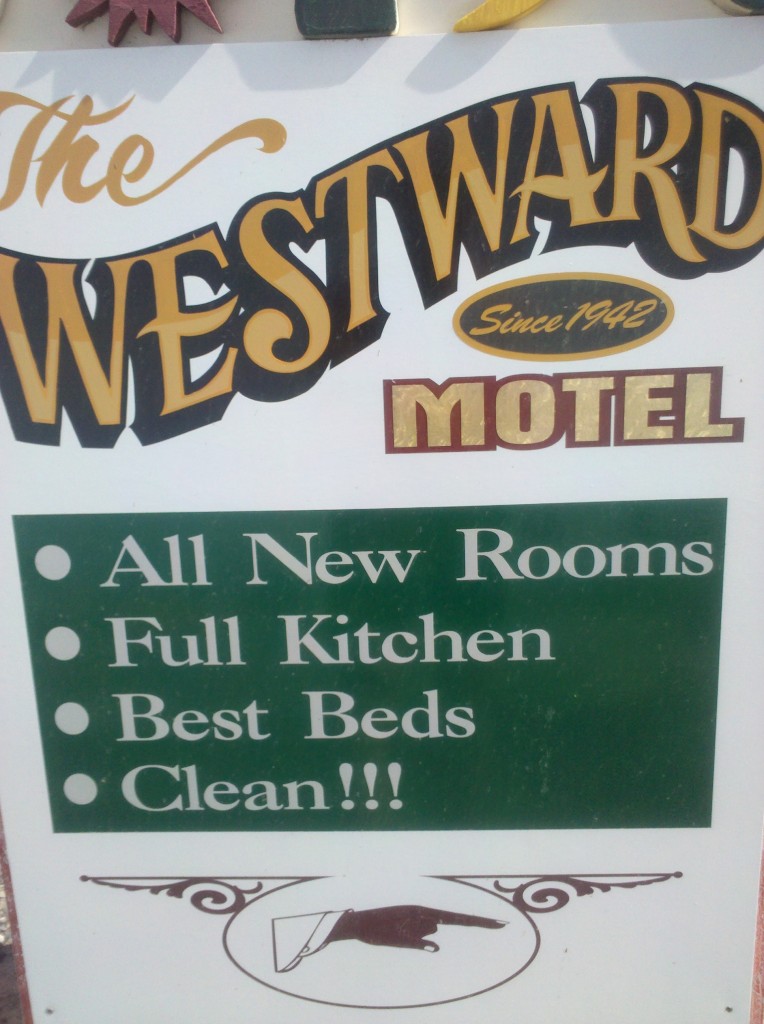 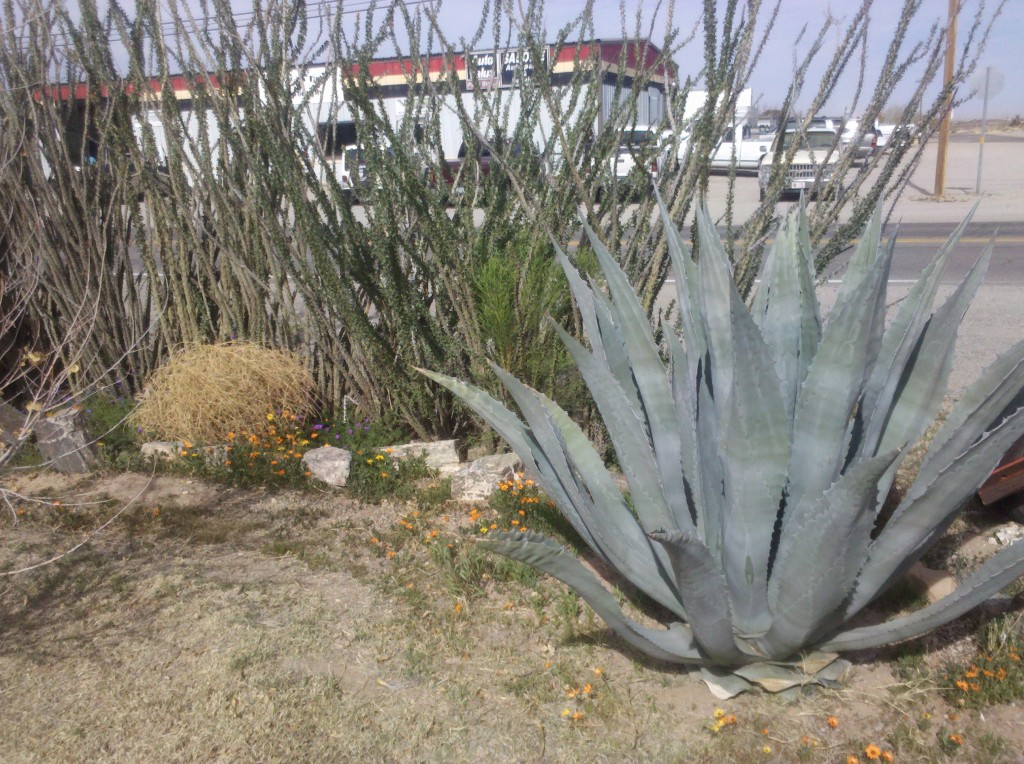 Agave and other Sonoroa desert plants at Westward Motel 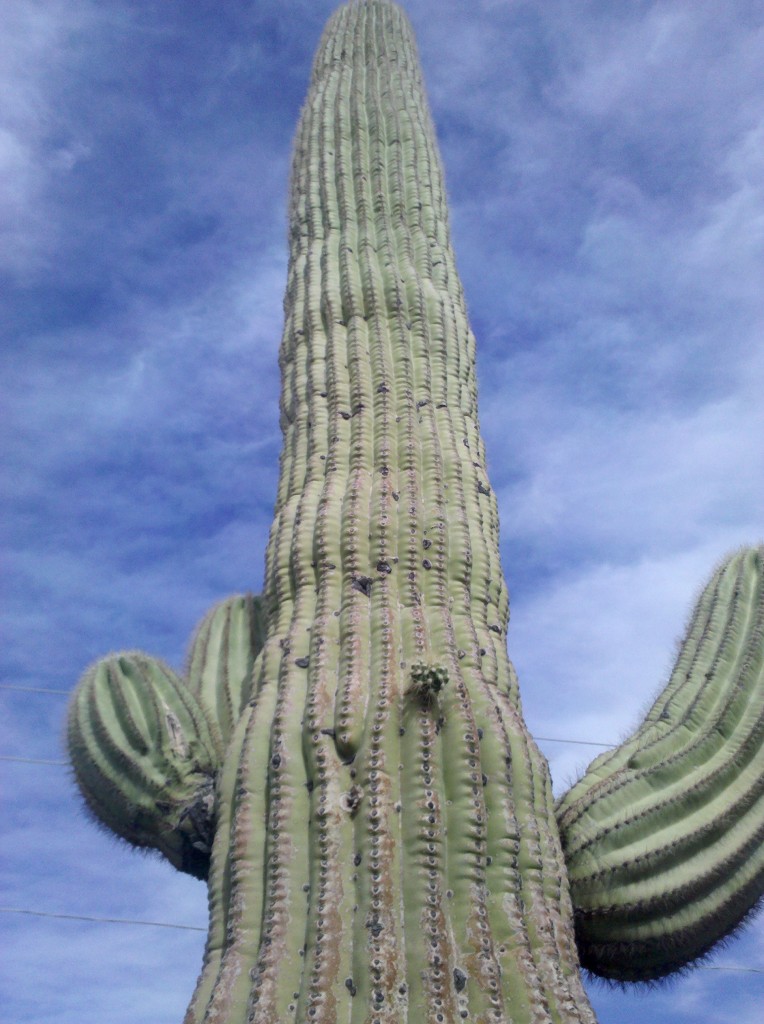 Most of the days on this ride, Beth has reached our destination ahead of us and has visited a grocery store and purchased cold brewski’s and snacks, and has had them waiting for us on our arrival.  How lucky have we been to have had her on this trip?  I will treasure this experience of having her along with us forever! Fortunately, today we managed to get to our destination first and we were able to return the favor! 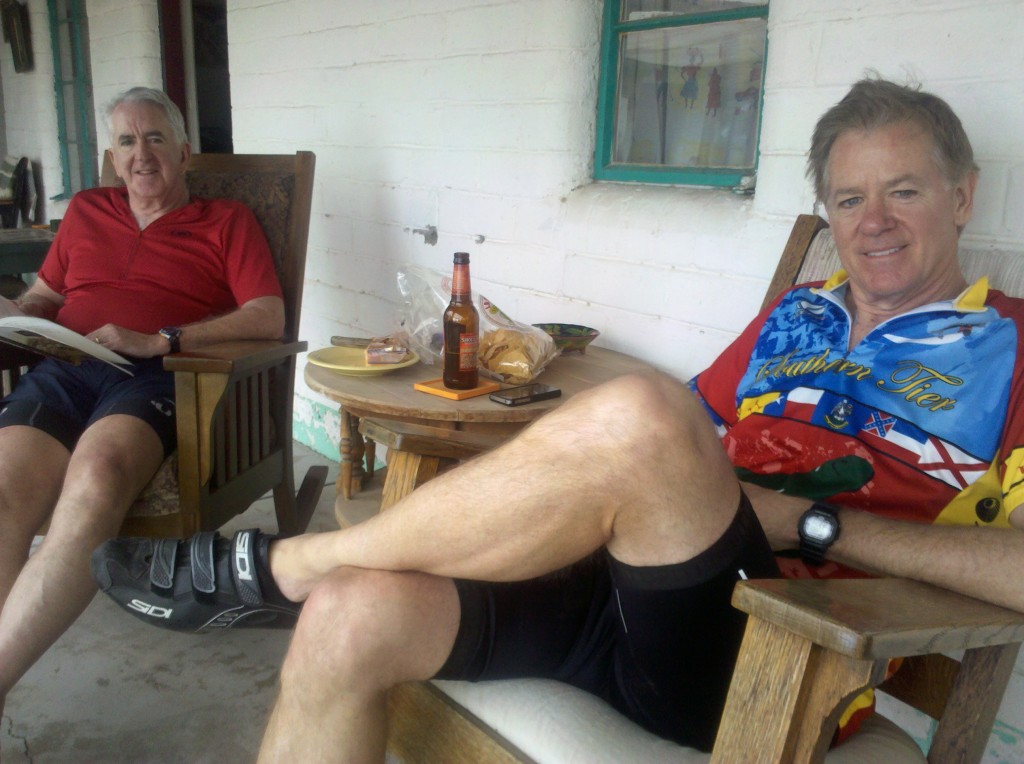 Tim and Mark relaxing at Westward Motel in Salome AZ 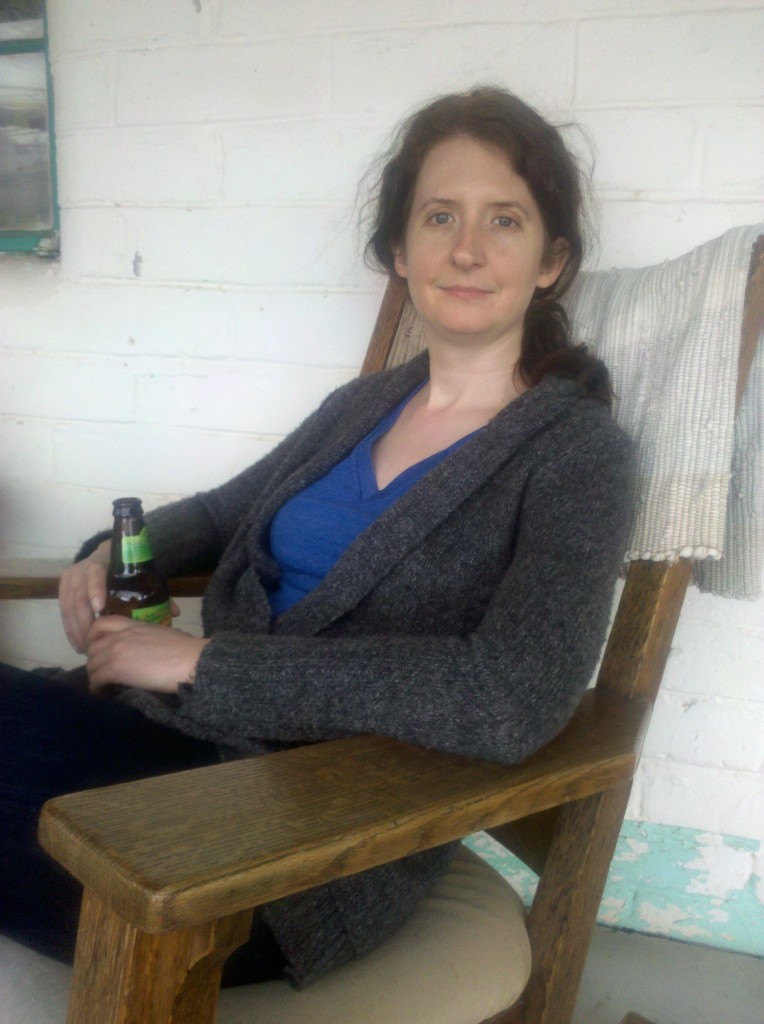 Tomorrow is supposed to be another day with westerly winds, just like today.  You’ll have to take my word that these flags are blowing toward the west. 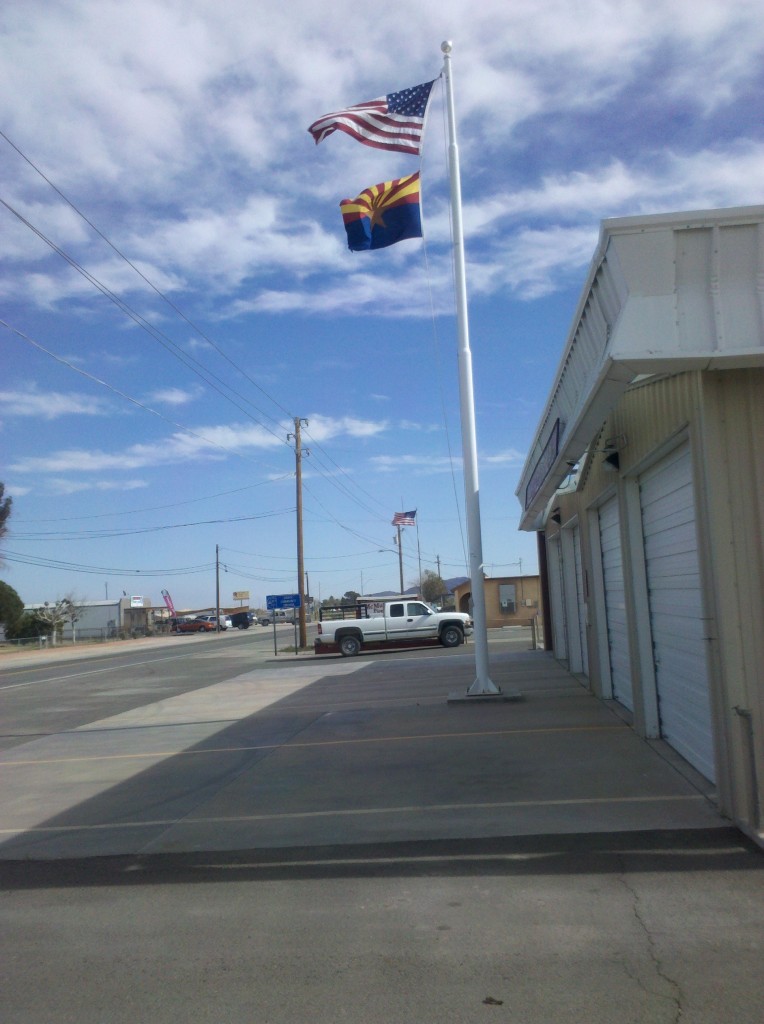 The bottom flag is the state flag of Arizona.  With any luck, and hoping that the Weather Channel is correct, our ride tomorrow to Wickenburg, AZ will be as manageable  as today’s ride!

One comment on “Tremendous Tailwinds from Blythe, CA to Salome, AZ”