So as not to be outdone by the impressive feat of my dad and uncles, I’ve given myself a physical challenge of my own: to incorporate salsa into as many meals as possible. I went two for three on Day 2, with a taco salad for lunch and fish tacos for dinner. Day 3 started promisingly at the delightful Major’s Diner, with tasty potato pancakes topped with sour cream and, yes, salsa. I might have to become “that guy” and start taking pictures of my food. Sorry, fellow diners. 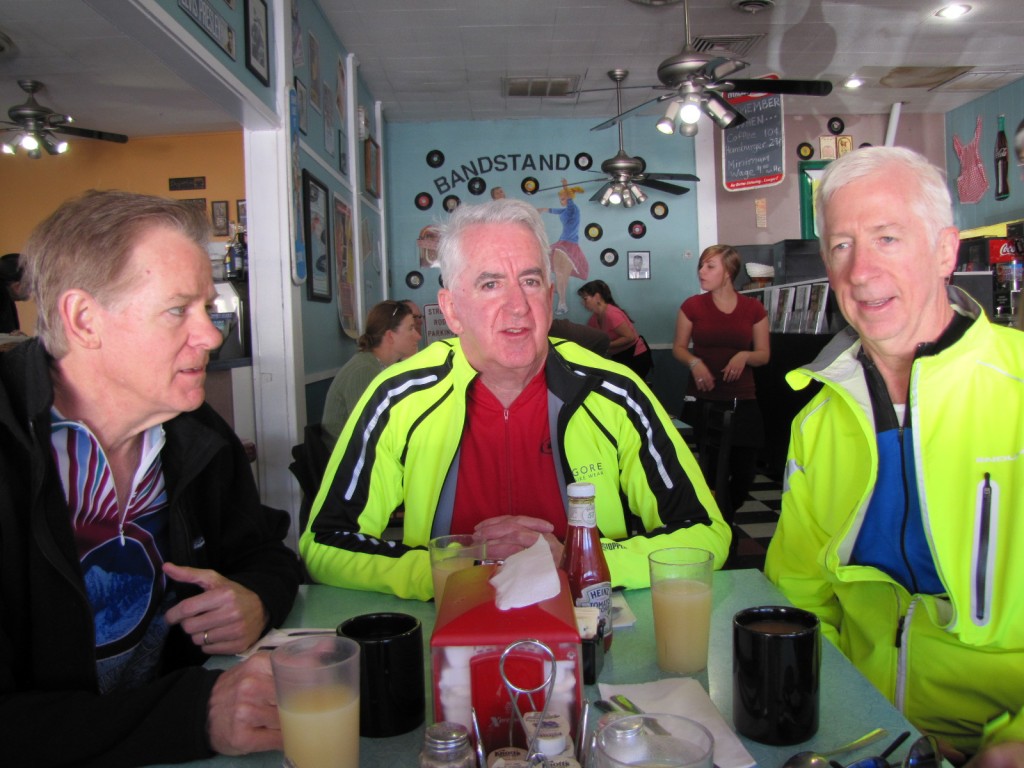 "This pineapple juice is great!" – Dad, about grapefruit juice 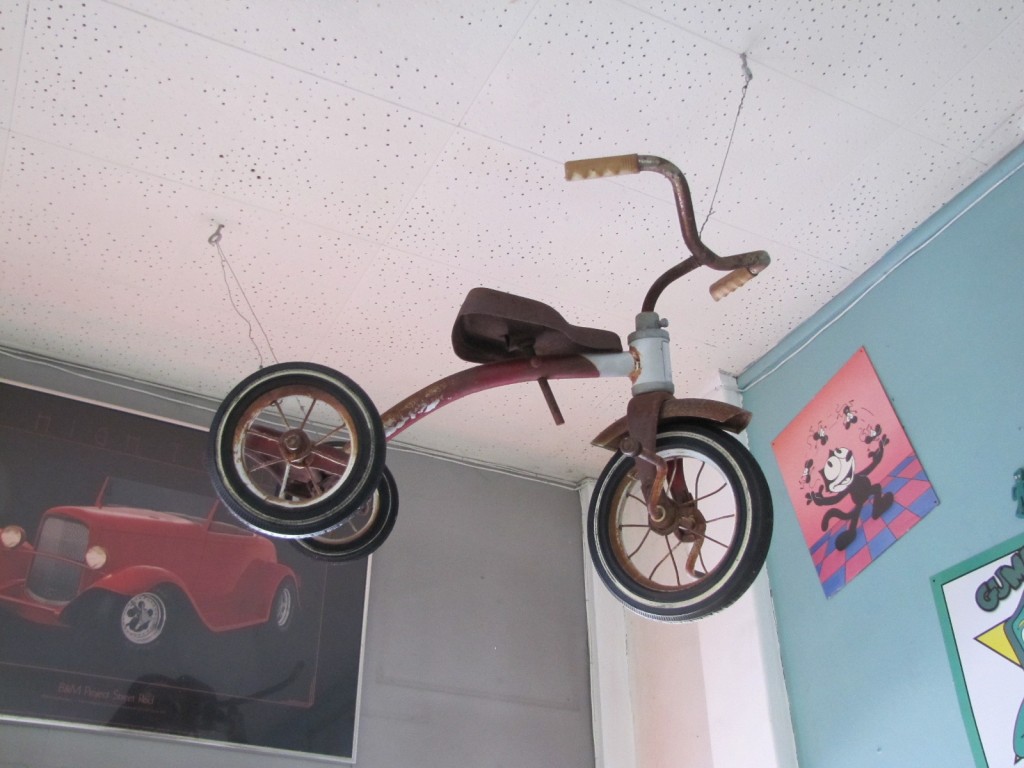 Shelly, Mark asked me to tell you that your bike is ready and waiting for next year's ride

But the SAG Lady’s real challenge is not to gain (much) weight after ten days of diner and chain restaurant meals. I’m eating nearly as much as men who are biking 50-90 miles a day (and drinking at least as much as they are, of course). My sole daily exertion entails carrying suitcases in and out of Great White. If I’m still able to zip up my skinny jeans on the last day of this trip, I will consider myself a winner.

After breakfast it was time for the boys to bid adieu to the lovely Pine Valley Inn: 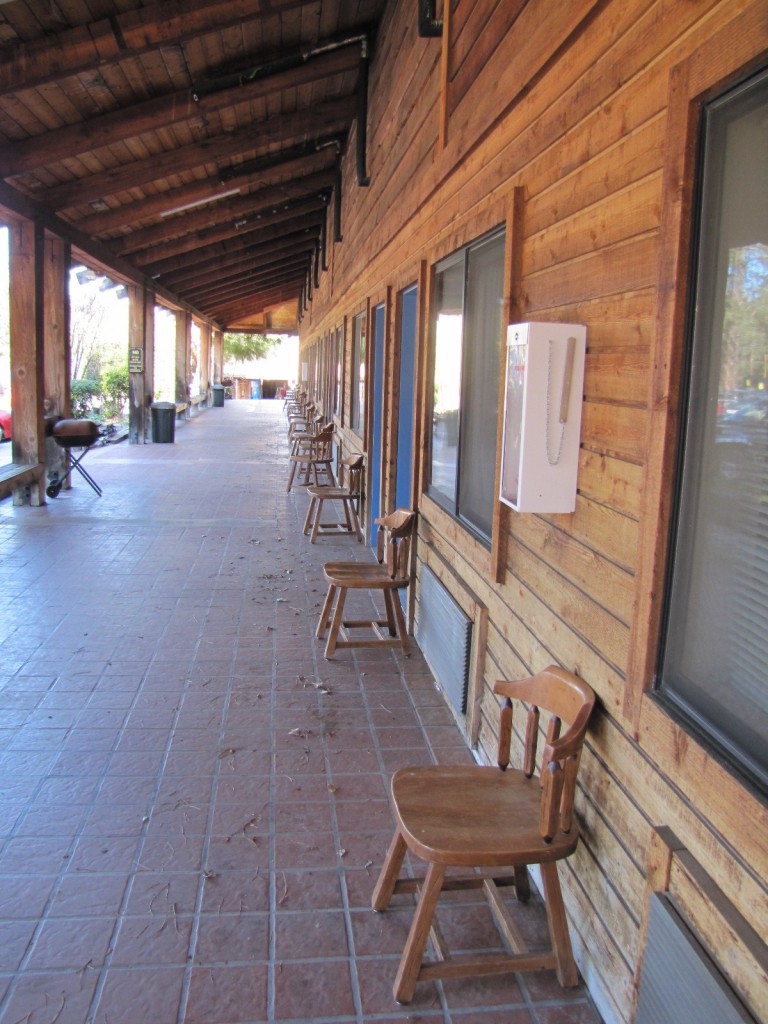 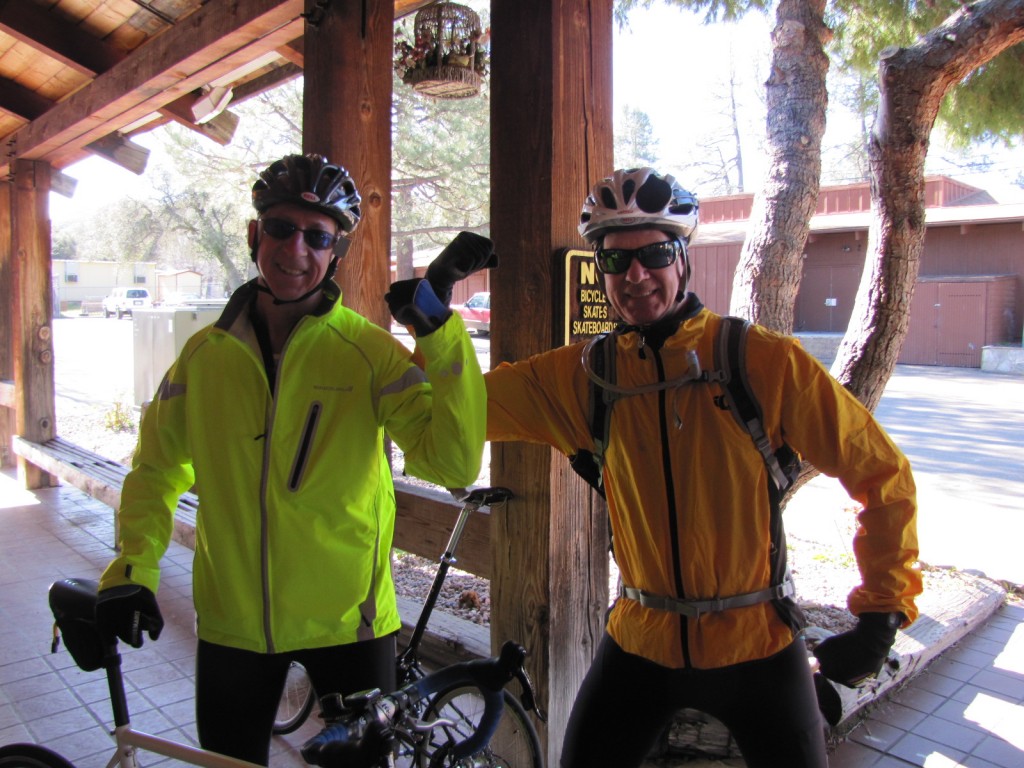 Yeah, we get it, you're strong

I chillaxed and got a little work done in the room, then headed out around noon to our predetermined lunch destination in Ocotillo, California, population 266. The drive was great. There are all kinds of crazy rocky hills in this part of California — it looked like a giant dump truck had come and unloaded huge piles of stones and boulders everywhere. I kept wanting to pull off to the side of the freeway and take pictures but was too much of a wimp. And I don’t pic and drive, so see Mark’s last entry for a shot.

As far as I can tell, there is only one restaurant in Ocotillo, so it was easy to pick a spot to eat: 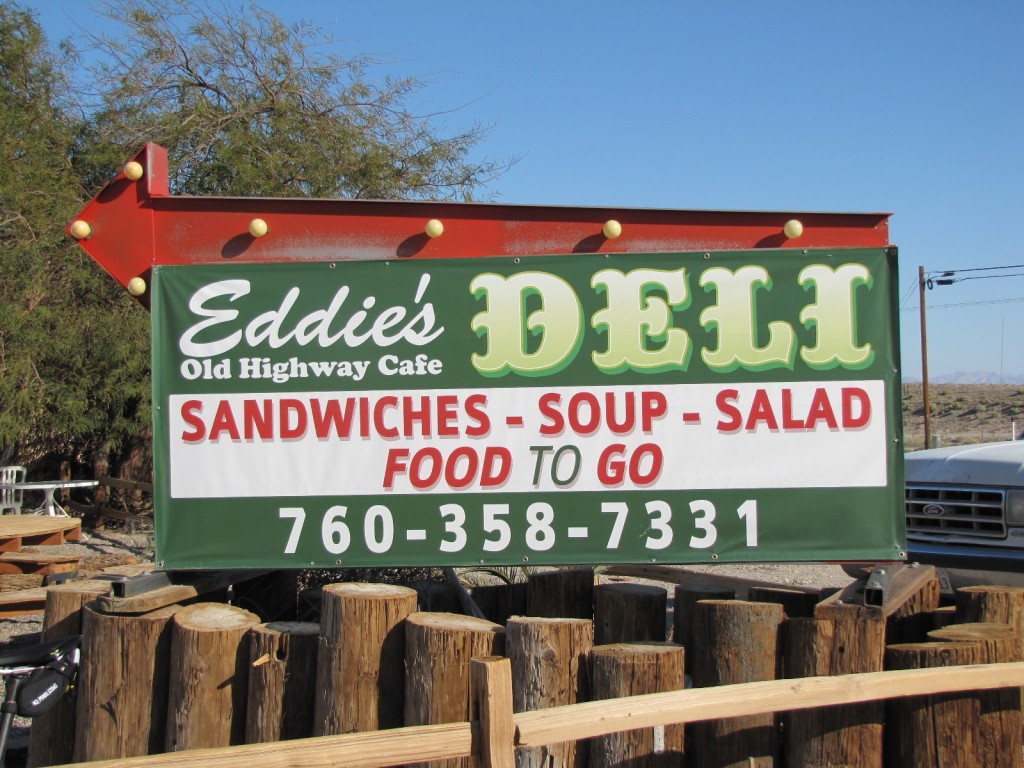 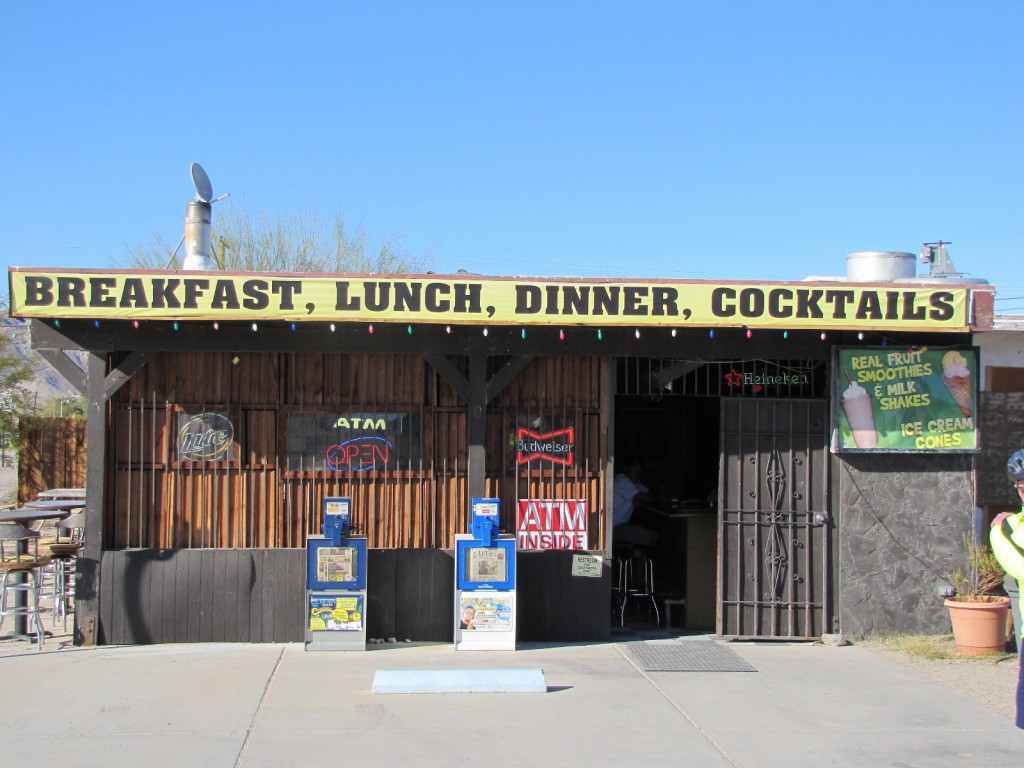 Places like this make me love America (not being sarcastic; I mean it)

The guys originally thought they’d arrive around 1:30-1:45, so I timed my drive accordingly. Just after I pulled up to the restaurant, Dad called and said that they had eight miles to go and that the last two miles had taken half an hour. Yikes. So I went inside and had an ice cold beer (along with being the only restaurant in town, this place is apparently known for its ice cold beers), killed time on my phone, and hoped no one would try to talk to me. Sometimes I enjoy talking to strangers, but for no good reason I was feeling a little wary of this place. Fortunately everyone was similarly wary of me and my non-Californian outfit. 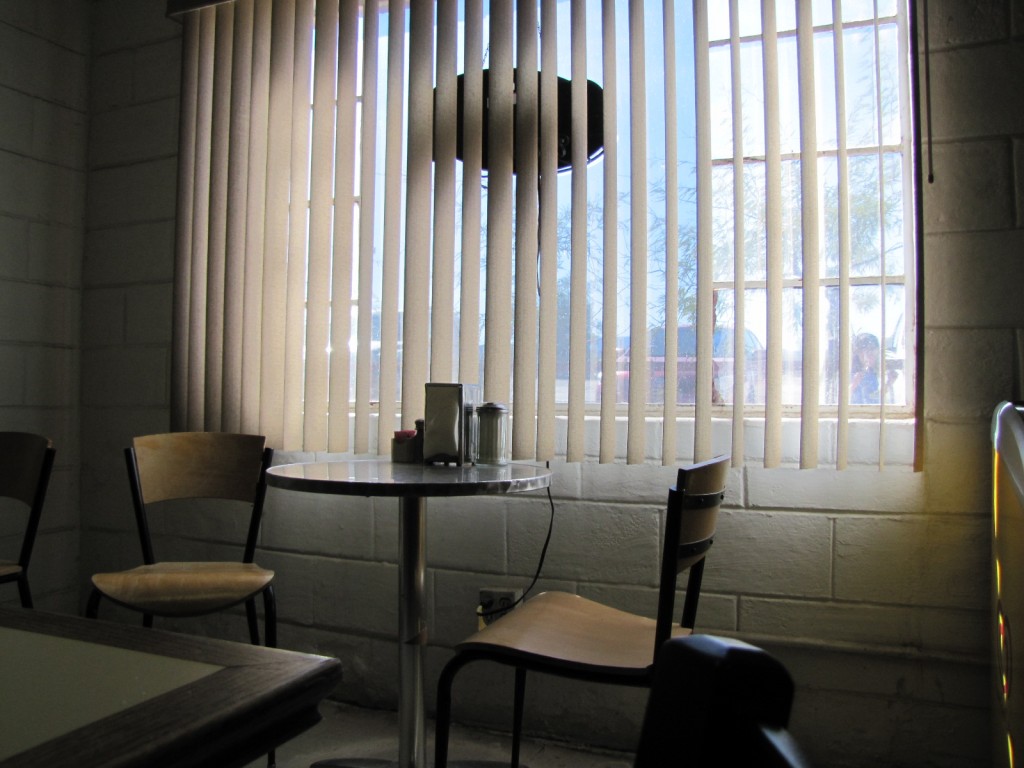 They got there just before 3 p.m., ordered hearty lunches, and ate quickly. I had chicken tacos (I really like tacos, okay?) and scored another salsa point.

Yesterday Tim was demoralized by how tough it was; today it was Dad’s turn. He was angry at the relentless terrain and wind, and he wasn’t having fun. But he and everyone powered on. 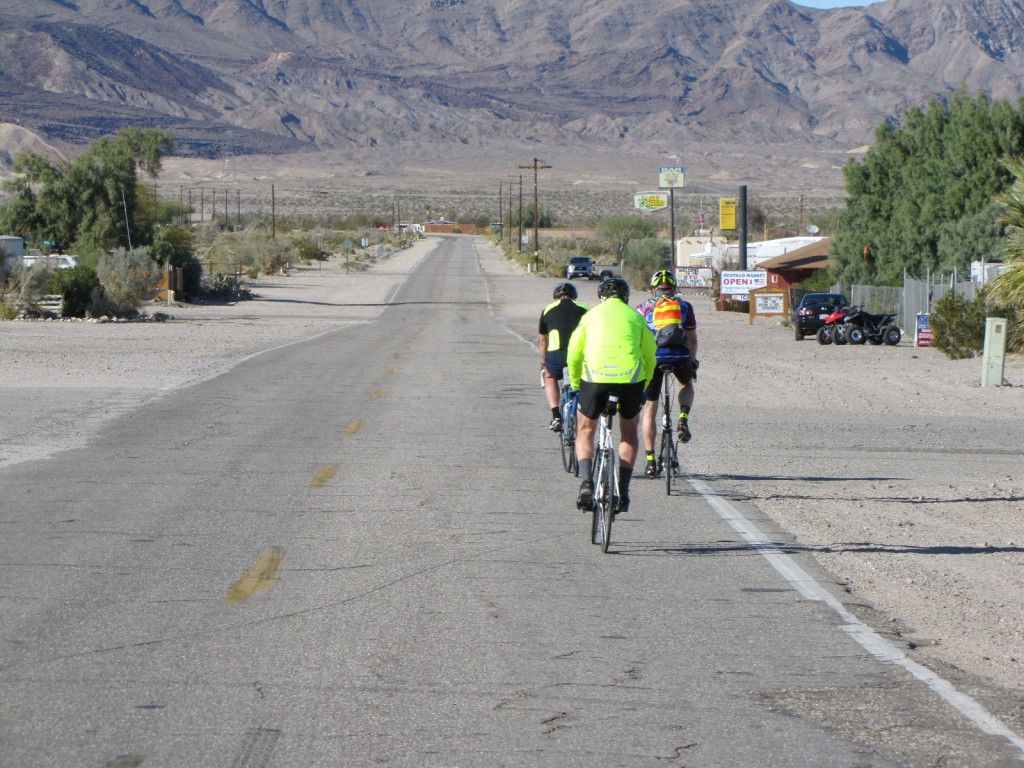 Oops, wrong way! Luckily they figured it out pretty fast

I drove on to El Centro with a couple of assignments: 1) pick up a battery charger for Mark’s camera and 2) find bright yellow windbreakers for Mark and Tim. Mark’s zipper had broken and Tim just wanted a new jacket.

Our hotel is right by a mall, so I hit up Best Buy and picked up the charger. Assignment 1 complete. But before Assignment 2 I had to take a little detour: 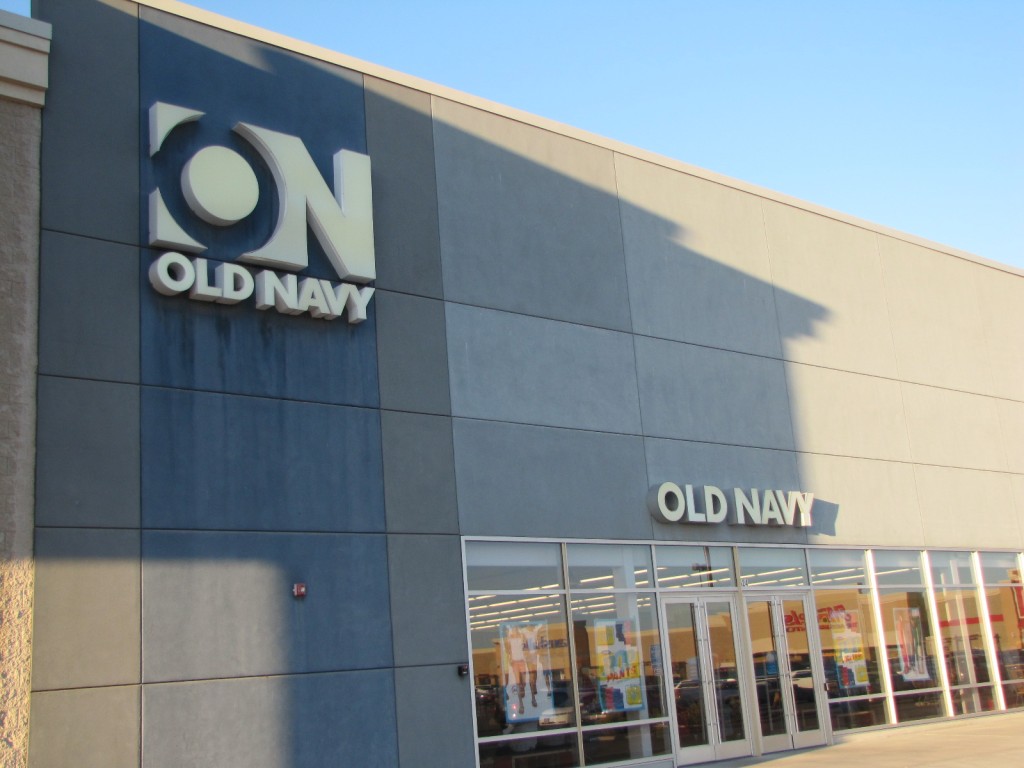 When did their logo start looking like a news network?

Ladies, if you haven’t been following, Old Navy has stepped up its game lately. About 40% of stuff in the store is actually stylish and is at least somewhat well made — a major improvement over how it’s been for its entire existence. They’ve got some especially nice accessories right now, so I encourage you to check it out. Anyway, four shirts and a dress later, I’m ready to look for some windbreakers. But then Dad calls and says the gang is in the hotel lobby. Whoops.

Good thing, though, because it was pretty much dark by that point and I was thinking Great White might have to make its first rescue.

We had a decent dinner at Famous Dave’s BBQ (salsa score: 0), then headed over to the mall to look for those jackets. Turns out none of the stores had what they were looking for, so I didn’t have to feel guilty about neglecting my assignment. Then Dad and Mark got vanilla cones from Dairy Queen and told me about how they used to go to the airport to watch planes with Gampi when they were kids and get DQ on the way home. Any day that ends with ice cream and a Gampi memory is a good day, and this was no exception.

Bonus note to my brother: One of the sporting goods stores we went to was playing our song!

I danced, because how can you not.