Posted by Mark on February 7, 2012
Posted in: Mark. Leave a Comment

I graduated from college in 1976, the year of the Bi-Centennial and of Bike Centennial. I knew about the event from Bicycling Magazine and I desperately wanted to join the ride but there was no way I could afford to take off from work to ride a bike all summer. I had to save up for the future, I needed all the money I could earn for books and tuition. Dental school began in September of 1976. Staying out of debt and avoiding student loans was my goal. Thirty-five years later and I am almost out of debt, and still dreaming of riding across country. But how can I just take off for two months? Ten employees depend upon me showing up and running an office every day. But if I don’t ride soon it will be too late and I know I’ll regret it. So I will do it one week at a time. It will still affect other people but I have their support and encouragement so I am going to do it starting in March of 2012.

This idea of riding one week at time the next few years originated with two of my older brothers. Tim, 62, runs a law firm and Brian, 58, owns an Engineering Consulting Company. It is not possible for them to take two months off either. Together we will ride one week at a time for the next few years. The plan is to start in San Diego and follow the ACA Southern Tier route to St. Augustine, FL. We will get as far as Phoenix this year. Next year the plan is to start in Phoenix and get as far as El Paso. It should take 5 rides each a week long to do the entire Southern Tier route. Also, joining us this year will be Brian’s daughter, Beth. She begged and begged to come along so we agreed to let her SAG for us. She will be able to drive our luggage to each nights destination. She will come and fix all of our flats and have snacks available whenever we want and then have cold beer and wine waiting for us to enjoy as soon as we step off the bikes. After she cleans and lubes our bikes each night we will maybe let her have a beer or two. What a great niece!

I don’t look forward to the task of shipping my bike to and from different cities multiple times. The idea of folding my bike into a hard shell suitcase sounds like a fairly easy, straightforward way to go. I did consider getting S&S couplers retro-fitted to the bike I already have, but it has a carbon fork and 18 spoke wheels and probably not the best gearing for some of the climbing we will be doing. I hated the idea of changing it from a fast, light road bike into something suitable for touring. So I ordered a Bike Friday Pocket Rocket. Tim will be using bike shops to box and assemble (and another to disassemble and box) for shipping back and forth. Brian is still building a Ritchey Breah Away that will also pack neatly in a suitcase. Here is my Bike Friday: 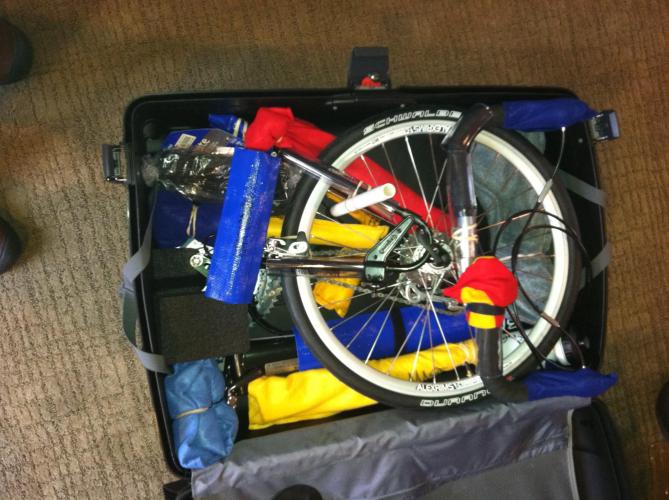